For the last decade or so, I’ve written live trip reports from Yellowstone during my trips.  The first several reports from my 2015 spring trip were posted on the Yellowstone.net forums, as in years past.  We switched over to the new site and blog during my trip, so I’ve transcribed the reports here.

Day 0, May 10
We departed two days later than expected, but when we finally made the drive on Sunday it went smoothly. Making the Seattle-Yellowstone commute on a weekend (and Mother’s Day) made for much fewer traffic and construction hassles.

We arrived at the north entrance at the end of the day and proceeded to Silver Gate in some beautiful evening light. Thankfully, we didn’t see anything too interesting… all my gear was buried beneath our trip supplies! We did see one black bear at Floating Island Lake and a trio of white-tailed deer fleeing a larger herd of mule deer at Roosevelt.

Day 1, May 11
I was still pretty beat from the day before, but wanted to make it into the park for at least half a day before returning home to take care of some business and errands. 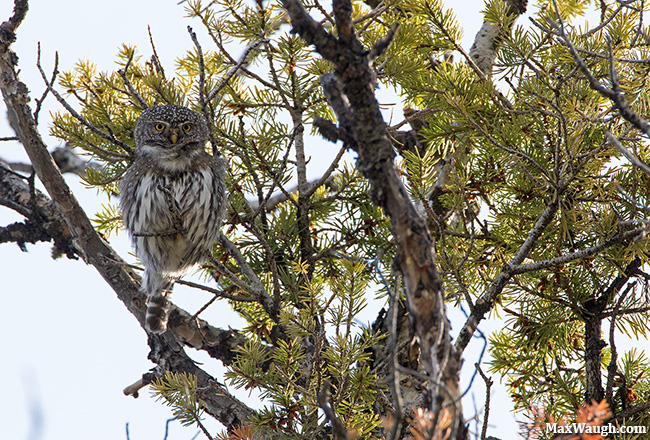 I didn’t see a single bear or wolf (though the watchers were out), but did have a very interesting find to kick the trip off. We went to Hellroaring to check on Robert’s recent Long-eared owl sighting. No long-eareds to speak of, but we somehow managed to get another elusive owl instead.

The moment I stepped out of the car, a “toot” could be heard up the hillside. It was an obvious owl call. Bill and Peggy (who had joined me) confirmed it as a pygmy owl vocalization. We rounded the hillside to see if we could spot the owl, and soon were hearing two distinct calls echoing back and forth. The odds of an owl sighting instantly increased.

The hardest part was finding a safe way up the hill. With so much skree in the area, it can be a treacherous climb. We circumnavigated the hillside until we reached solid ground and could ascend safely. I made it up first and quickly found the first owl. It was perched high at the top of a pine tree, in a tough spot for photos. Still, this was only my second pygmy during a Yellowstone trip, and technically the first inside the park.

I added to my tally soon, as we were able to track down the second owl, maybe 75 yards away in another tree. Once again, it was very high up, so the photo conditions were far from ideal. But we managed to snap a couple of awkward shots.

I’m not sure I’ve ever started off a trip with such a “rare” sighting. So either this means things are going to be fantastic this spring, or everything will go downhill. We’ll have to see how things play out in the coming weeks.

The rest of the day was pretty quiet. There were a couple bull moose at Round Prairie, and a cow moose grazing alongside our driveway in Silver Gate. A few different interesting birds were spied throughout the day: three peregrine falcons, Williamson’s and red-naped sapsuckers, and a pair of green-winged teals I was able to photograph next to the road on the way home in the afternoon.

Day 2, May 12
What a wild weather day! Snow, hail, rain, thunder, lightning… oh, and a little sunshine. I woke up at 3:30—ugh—in order to try and get down to Hayden Valley and the Lake at a decent hour. Prior to Dunraven’s opening, the east side of the park is a heckuva long commute from Silver Gate. 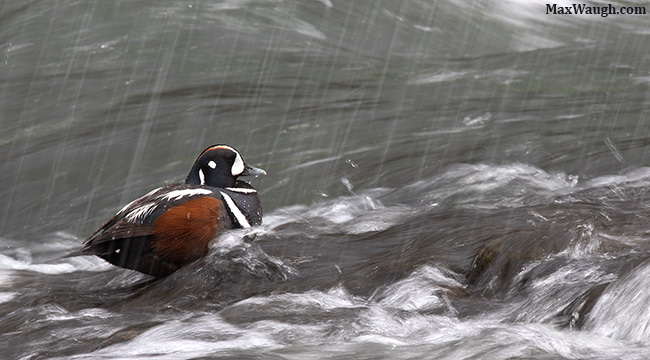 Visibility was awful due to heavy, wet snow and rain. There were very few hardy souls on the road before dawn, unless you count the dozens of mice fleeing my oncoming headlights.

I reached Hayden Valley safely and saw my first grizzly bear of the trip. It was maybe 75 yards off the road, but was circling around in some tall sage, so there wasn’t much to do photo-wise. I continued on, hoping to maybe have better bear or other predator luck further south.

The furry critters weren’t really cooperating today (unless you count a pair of muskrats at Gull Point Drive), but the birds put on a show. At Mary Bay, I witnessed something new: a Red-necked phalarope murmuration. I saw an undulating blob skimming the surface of the lake as I arrived, but had no idea what kind of birds were making up the flock until I zoomed in on some of my photos. I’ve only seen a couple individual phalaropes here over the years, so witnessing a big flock performing high octane maneuvers like this was a big surprise. The photos aren’t too exciting, but hopefully the video will be interesting!

Other interesting birds spotted near the lake included cinnamon teals, eared grebes and even a loon. But that wasn’t the end of the avian action. At Lake Butte Overlook, two blue grouse were drumming and displaying a bit. I’ve seen these birds up there several times, but I never have much luck getting them fanning their tails, so it was a nice change.

On the way back north, I stopped at LeHardy Rapids for the harlequin ducks. I counted at least 20! Clouds and eventually hail rolled in, but it was still a lot of fun shooting these colorful and dynamic characters. The hail actually made for some interesting textures in the longer exposures.

The long drive back north was interrupted by a quick stop at Mammoth to check the owl nest (movement in the nest, one of the adults sleeping in a nearby tree), and a stop at Petrified Tree to finally say hi to the Dutchies. While we enjoyed Happy Hour, a lone black bear attracted a small crowd at the bottom of the drive.