Day 3, May 13
I finally got Jenn into the park. Unfortunately, I couldn’t produce a ton of mammal sightings that would draw her out of the car, but the birds were pretty great once again. 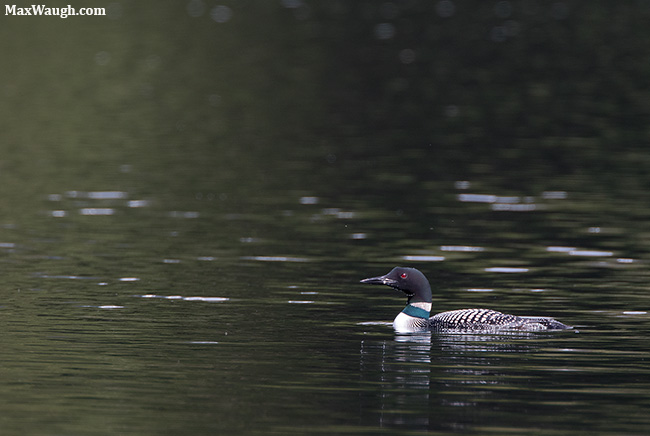 We drove through an empty Lamar Valley on our way to Slough Creek, where I knew a big crowd would be staking out the days-old bison carcass there. Sure enough, there were tons of onlookers, but little action. A grizzly had fed and gone in the morning darkness prior to our arrival. Wolves were seen high up on the far hill a couple miles away.

We did eventually find a few closer mammals. A moose was at Petrified Tree, a photogenic marmot perched along the cliffside near Calcite Springs, and at Hellroaring I managed to get Jenn out of the car when a pika appeared in the parking lot. In fact, there was a ton of pika action at Hellroaring in all of the rock piles. We saw one eating from its “grass pile” and also found a smaller juvenile (though not quite a baby).

At Roosevelt we had a brief badger sighting behind the restrooms. Back in Little America a black bear sow with two cubs wandering along a high hillside (well out of photo range). And just inside the NE entrance we saw another lone black bear at midday.

Anyway, the birds. Not everyone’s cup of tea, to be certain. I’d certainly prefer wolves and bears and cats, but I’m not going to turn down some of the great opportunities that have presented themselves in recent days. Wednesday I had another “first,” seeing two Soras in one of the ponds along the Slough Creek road. This small wader is extremely elusive and rarely seen in the park. It’s also rather pretty for a wader. I didn’t get any clear shots, but it was cool to see nonetheless.

In the afternoon I spotted a harlequin duck in Soda Butte Creek on the way back into the park. Next I hiked to Trout, Buck and Shrimp Lakes, the latter of which I was visiting for the first time. No otters, but some good bird photo ops. On the way up to Shrimp Lake I encountered two cranes. Randomly, there was a loon at Trout Lake. This was by far my best loon encounter, as they’re normally seen too far away on Yellowstone Lake.

There was also a lone eared grebe and a spotted sandpiper that stayed somewhat close for photos. Plus, a pair of goldeneyes posing in lovely afternoon light, and even a robin that chose a nice perch for me.

So once again, the birds carried the day.

Day 4, May 14
I was pretty worn out from the last few days, so I slept in and stayed home to take care of some business. 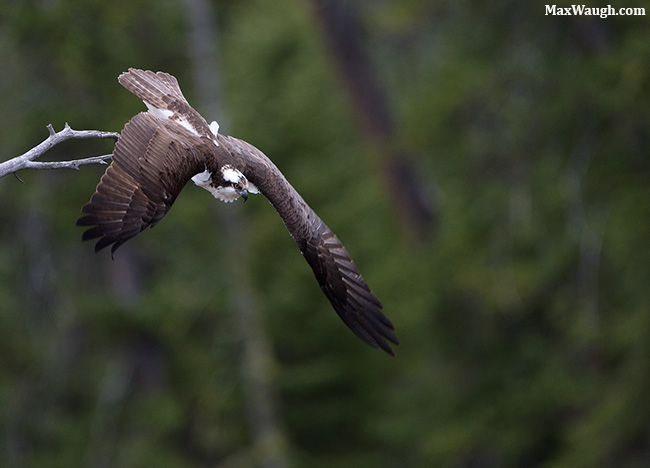 When we finally went into the park at noon, we saw two cow moose at the NE entrance gate and another kneeling down on its front legs to graze in the Soda Butte Valley. At the west end of the Lamar, an osprey perched over the river. I set up and waited for some time for it to dive down after a fish, but when it finally took off it just flew off downriver.

Nothing happening at the Slough carcass, but just down the hill near the Lamar River Bridge a coyote den had just been raided by a wolf. The adults chased the wolf off, and one of the coyotes was supposedly in the midst of moving the pups. By the time I set up, there was one restless adult at the den hole, but little in the way of action. The rain really started to fall then, so I packed it in and continued west.

At Floating Island Lake, we just missed a black sow and cub. We drove all the way to Mammoth from there, on the way stopping to play traffic cop while another motorist patched up a leaking gas canister that was dripping fuel all over the road at Blacktail. One of the adult great horned owls was in the nest tree when we stopped to report the leak to the rangers.

After taking care of business in Gardiner and grabbing some Moose Tracks ice cream at Mammoth, we returned east. Passing Floating Island, I spied a pied-billed grebe. They’re common back home, but I’ve never seen one here. At Elk Creek, a lone black bear was attracting one crowd, while around the bend the black sow and cub that have been hanging out near Petrified Tree attracted an even larger one. Unfortunately, they stayed somewhat hidden behind the trees and deadfall, so I never was able to get a clear shot.

On the way home, a lightning storm passed over Soda Butte cone. Images of lightning + Soda Butte danced through my head, expect by the time I got out and set up (and soaked in an instant), the lightning disappeared.

Thoroughly moistened, I gave up and headed home to dry out.

Day 5, May 15
I hit the Lamar at dawn and made it all the way to Slough Creek without any notable sightings. I checked on the carcass, but all was quiet. 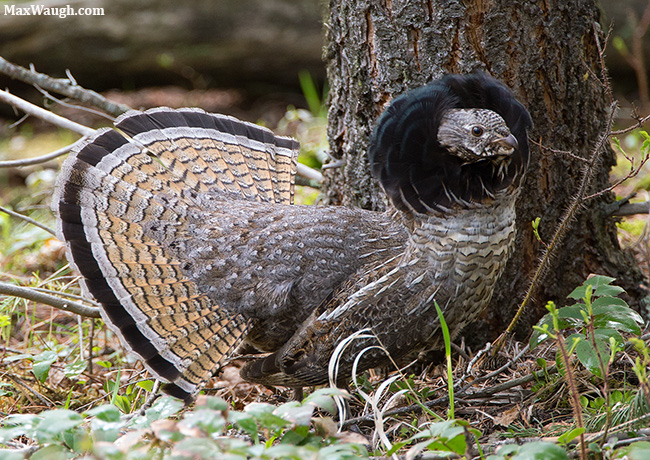 At Petrified Tree, a distant black bear was grazing high up on the hillside. No cub visible, so it was likely the individual we saw there during Happy Hour a few days back.

I headed toward the Tower Road, hoping there may be some bear action over there. Instead, I got roped in by birds again! It was quite a hot spot: I found another pygmy owl(!), a great horned owl and two ruffed grouse, one drumming and the other displaying briefly.

After a midday break—and the onset of more rain storms over Silver Gate—I headed back into the park. This session began the same as all the others: Birds! A kestrel perched right next to the road in the Lamar and miraculously did not fly away as I snapped a couple photos. A couple of ravens posed for photos, and so on and so forth.

But finally… at long last… the mammals showed up for me! In fact, there was a minor bear irruption in the Tower/Roosevelt area this afternoon. It started with a trip up to Calcite Springs, where a sow and two cubs were napping near the road. This is the same family that appeared last June along the upper Tower Road. The cinnamon and black cubs had both survived the winter.

Since I was shy on mammal encounters so far, I was determined to wait them out. There were very few sight lines among the crowd, so I waited a bit to the east, hoping that when they woke the bears would head back that way (toward their traditional territory from last year). And it almost worked out that way. They roused themselves after a half hour and momma bear began to wander east, toward a small meadow. I was ready to photograph the whole family in the open, except that the sow chose at that moment to turn toward the road. At this point the bears were within 40 yards of the crowd, so the rangers stepped in and spooked her back off the road. Instead of continuing east, she retraced her steps, cubs in tow, and headed west. So close! 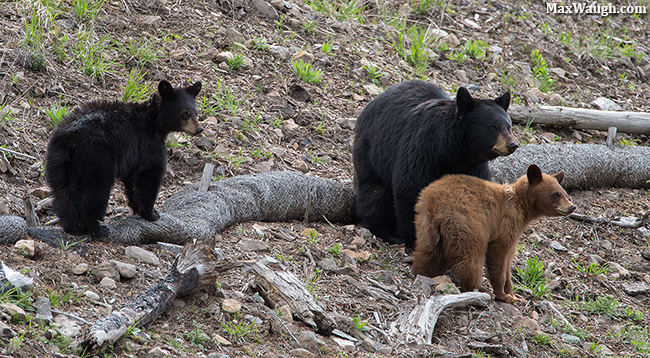 Thankfully, not all was lost. They remained close to the road on the south side, so everyone in the crowd was able to shuffle safely down to the Calcite parking lot on the north side. We could spread out and photograph the bears as they grazed on the opposite hillside.

Eventually the bears ventured too close to the road for the rangers’ tastes, again. And this time the the law took the next step. One of the rangers pumped his shotgun and the sow immediately froze. She had recognized the precursor to the loud noise that was to come.

A couple seconds later, a cracker shell boomed. It did its job, scaring… half the crowd of onlookers. The bears did not immediately flee, but did eventually move further up the hill.

It felt good to have a nice bear shoot, invigorating even. That was the highlight of my day, but there was still a lot more bear action. While we were being deafened at the top of the hill, Rosie and her trio—you know, the Bloodthirsty Bridge Bears (according to ABC News)—were out grazing at the bottom of the hill. Mixing in some veggies to supplement their diet of human flesh, presumably. By the time I got down there they were back behind the trees a ways. So I returned uphill to check on the first bear family, and they were still above the road, making their way downhill. There was room for folks to stand on the opposite side of the road and get pictures.

While everyone was concentrating on the bears, a fox suddenly appeared, its mouth full of food, and weaved its way through the surprised onlookers. It raced down the road, only to encounter a vehicle coming the opposite direction. The fox veered off the pavement, but not before dropping a ground squirrel and a mouse on the way. Down toward the meadow near Rainy Lake, the fox was later seen going uphill through the trees. It still had a few critters tucked away in its maw, so it appeared that its family would not go hungry.

Seven bears (and a fox) within a half mile isn’t bad, but you can also add a lone cinnamon bear on the Petrified Tree drive, as well as a black with two new cubs further up the same road (the drive had actually been closed off temporarily due to this new trio’s presence). By then it was getting dark, cloudy and wet, so I didn’t attempt any more photos.

On the drive home through the Lamar Valley, I did make one final stop, despite the rain. A bison cow was swimming across the river with its calf trailing far behind in the churning water. It was very reminiscent of the moose cow and calf crossing I witnessed last spring. The cow made the near bank, but the calf was quickly being swept away downriver. At this point the drama was too far for decent photos, so I was shooting video. I was able to record the mother racing down shore a ways and crossing over to a gravel bar in the middle of the river. The calf caught the edge of the bar and was able to struggle onto shore. There was a brief but tender reunion between mother and shivering calf before they headed for more solid ground. Hopefully the video turned out!

It was only fitting that a bird sighting ended the day. A male harlequin duck is currently hanging out on the edge of Soda Butte Creek outside our living room window.