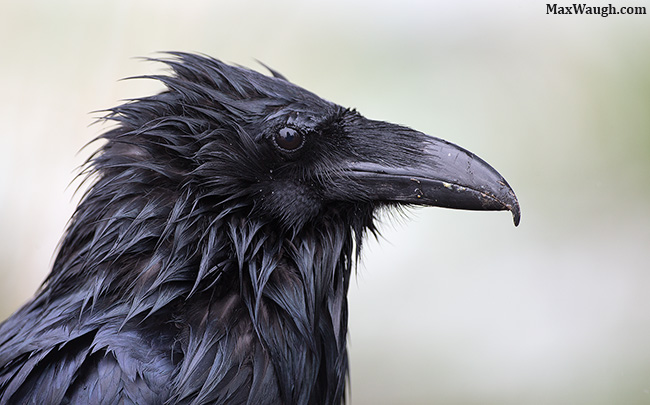 That’s what we were dealing with the moment we stepped outside at 4:15am. Three to four inches had fallen in Silver Gate overnight and it was still coming down. Just as with my last early morning drive to Hayden Valley and the Lake, I was dealing with some brutal visibility behind the wheel. This time, there were even fewer souls on the road… even the mice were staying indoors.

The only letup was when the snow turned to rain as we descended off Blacktail and down to Mammoth, but it quickly picked up again at Swan Lake Flats. And the conditions only grew worse from there. We were on the road early enough to beat any snow plows, and the accumulation doubled from Silver Gate to 6-7 inches on the road to Norris Junction. Driving through the construction zone, the tracks in the snow occasionally narrowed to only one lane of traffic. Luckily, there were few vehicles coming from the other direction.

Eventually we did make it to Norris, and ran into some acquaintances heading the opposite direction. They gave us the bad news: the road between Norris and Canyon was closed. Our very early start was for naught. Sleep would have been a nice alternative.

Carefully heading back north, we returned to Mammoth safely. A lone coyote at Sheepeater and a couple of sandhill cranes at Swan Lake were the only notable wildlife sightings.

Back on the relatively benign (and now rainy) northern road, we spotted two moose trotting along a berm across from the road at Elk Creek. A short while later a wet and bedraggled raven looked more like a dragon as it posed for us at the Yellowstone Picnic Area. 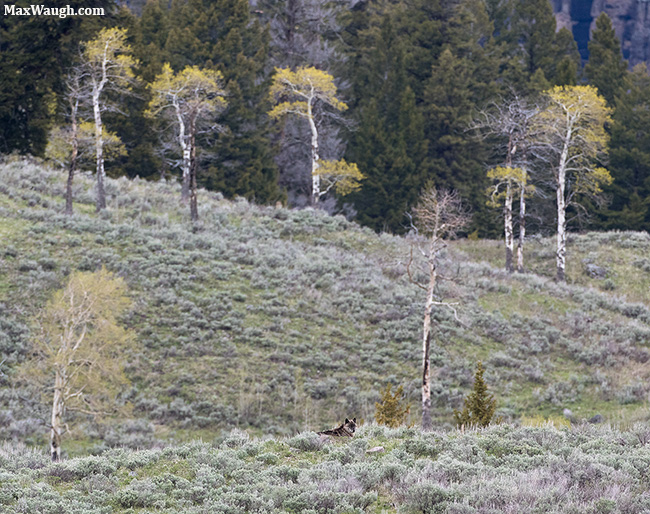 The previous evening’s cinnamon bear was hanging out in the rain at Petrified Tree drive, and the sow with the mixed cubs was on the Tower Road. They were right next to the road, in fact, and someone quickly called in the rangers to direct traffic. The rangers brought a paintball gun, which is the next step up from cracker shells, apparently. We did not witness any shooting, perhaps because the mother bear saw the ranger fumbling with the gun and turned and went back into the woods. This bear seems to be on a first name basis with every weapon in the department’s arsenal. I’m sure she dealt with them plenty last year, given all the traffic snarls that were caused by her appearances above Tower.

At that point we headed back toward the northeast, spotting a Cooper’s or Sharp-Shinned Hawk trying to dry out (unsuccessfully) near Roosevelt. Back in Silver Gate, friends tipped us off to a lone black bear further up the road, so we drove up and got a couple shots from the safety of the car.

I returned to the park later in the afternoon. As with Friday afternoon, there was more bear action in the second half of the day. The sow with two was below the road closer to the Calcite lot, while Rosie was stationed right next to the lowest pullout on the Tower Road. The pullout was blocked off with signs and three rangers as she nursed all three cubs right nearby.

At Petrified Tree, the black with single COY was seen out across from the parking lot before disappearing up the hill. By the time I arrived, a small single black bear took their place, grazing out in the meadow.

It was time to head home and see if we could manage to grill up dinner before the next rain squall hit. Unfortunately—or perhaps fortunately—I was delayed. Passing Soda Butte, I noticed a small gathering of cars at the east end of the valley. I arrived on the scene in time to see two dark shapes wandering through the sage. Finally, some (somewhat) closer wolves! I pulled over and was able to take a few shots of the pair. I don’t follow the wolves as closely as some, but I think one may have been the alpha male known as “Twin.”

The other, sporting a collar, may have been 926F. I’m sure the official wolf watcher reports will provide further clarification. Regardless, it was a nice way to end the day! Oh, and we had a moose keep us company as I grilled up dinner back at the cabin.

Day 7, May 17
Despite being nailed by the weather the morning before, Jenn suggested we try another early wakeup call and another attempt at getting to Hayden Valley and the Lake. This time, there was only a light snow falling after no accumulation the night before. Our chances of reaching our goal seemed to be a bit better this time around, and sure enough, we made it down to Hayden Valley safely. It was snowing pretty hard by the time we entered the valley, but the roads were drivable at least. I stopped to shoot a little video, but photo ops were wanting with the heavy snow. 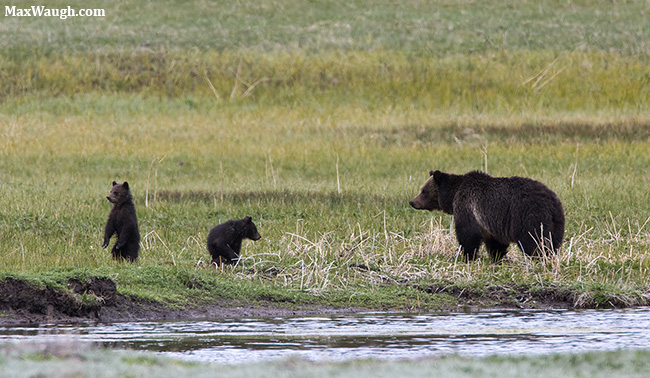 I continued to stop for interesting scenery all the way to Mary Bay. It was there that we noticed a large buildup of cars at the east end of the bay. Must be a bear. But which one?

It was the grizzly known as Blaze, sporting her two new cubs.

Before we proceed, it’s important to mention that Blaze and I have a complicated history. Well, really not that complicated. She hates me.

Back in 2011 when she debuted her cute little cub (later nicknamed Hobo), everyone seemed to have a great time watching and photographing her. Except for me. I kept missing every notable “Blaze moment.” It was brutal. And I haven’t seen her since then. Maybe she wasn’t my nemesis in the park, but she’d have been a top contender.

Well, there she was. As the snow continued to fall, she and her cubs grazed on the hillside in front of the road. According to the photographers who were lucky enough not to be blocked by the road closures yesterday, the bear family put on quite a show on Saturday. “Typical,” I thought, when it came to Blaze. Yet here I was with two grizzly cubs of the year before me, so ultimately I was just happy to have something other than a bird encounter.

It ended up a very long visit. Blaze continued to graze and wander the hillside. Meanwhile, her cubs exhibited a lot of energy. One of them in particular was prone to chasing just about anything that moved. It ranged far and wide chasing ravens, geese… and probably flies. It was fun to watch, and as the snow started to lessen it became more fun to photograph. At one point she laid down and nursed the cubs.

After some time, the grizzlies hiked up the hill and sat down, allowing the queen to survey her domain. It was a good time for a break. We went off in search of owls and other wildlife (no luck) before returning for the afternoon session. The bears disappeared for a brief time when a coyote showed up and sniffed around, but they soon reemerged and descended.

The cubs led the way, racing down, up and every which way. They eventually made it to the bottom of the hill, which meant they were obscured by sagebrush for stretches. However, the cubs appeared to have loads of energy to burn. They emerged above the sage, zooming all over the place, sometimes so fast that they tripped over their feet and tumbled before recovering and resuming the race. 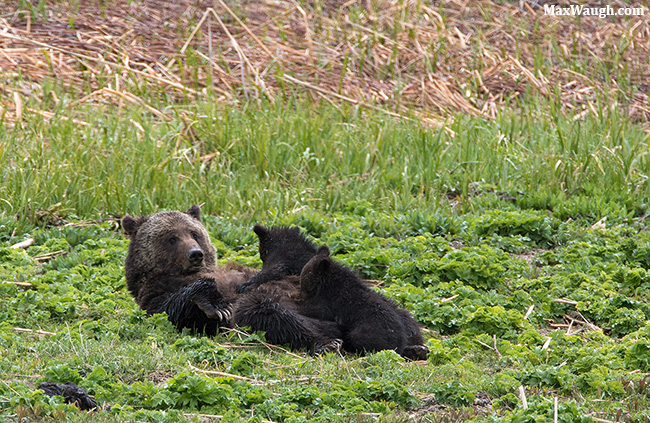 Over the next couple hours, Blaze and her little hellions worked their way westward, along the back side of the large pond across from the bay. Photographers leapfrogged down the road as the bears moseyed along. Most folks weren’t actually taking many pictures, as Blaze was a bit far out. And maybe that’s why at least four people inexplicably walked right past the “Area Closed” signs and out toward the pond. Some of them made a show of photographing some birds in the water, but it didn’t really explain the rationale of walking into what is actually a thermal area and between a grizzly sow with cubs and a bison… all in front of a crowd of a hundred onlookers. Simply bizarre, and at least mildly stupid.

The bears more or less ignored this distraction and proceeded toward the west end of the pond… and, we hoped, closer to the road. Unfortunately, they came face to face with three bison. Blaze zigged and zagged for a couple minutes before finally choosing to take her little ones away from the road and up the far hillside. Darn.

Overall, it was a very fun session that took up most of the day. And I can officially forgive Blaze for her past transgressions.

That was enough to make the day a success, but it wasn’t over. We had to drive home, via Hayden Valley, Canyon, Norris, Mammoth, Roosevelt and the Lamar. And we still had some daylight left.

After negotiating the horrendous construction zone we arrived at Mammoth. I saw a couple photographers set up at the great horned owl nest and decided to stop and see if anyone was out in the open. Just as I walked over with my camera and tripod, one of the adults burst out of a low branch to my right and flew right over my head. I was just a few seconds late, but luckily the owl proved to be very active. Over the next half hour, it went from the nest tree to a large tree across the road, and then back again before taking off one final time. So I still got three opportunities at owl flight shots. Two of the sequences were somewhat successful (that’s photographer-speak for “not-all-that-blurry shots”), and the last takeoff came right at me.

I returned to the car and we proceeded east along the northern road. A short ways past Phantom Lake, a black bear with two cubs of the year foraged on a hillside opposite the road. We didn’t stop.

In the Lamar Valley, a herd of pronghorn was on high alert due to the presence of a hunting coyote. If you haven’t seen coyote/pronghorn interactions, they’re unique and often quite fun. I’ve seen these two species take turns chasing each other across the Lamar and elsewhere. It’s like a game between them. This time, the pronghorns bunched together and paraded in a circle around the coyote. It reminded me of the spectacle one might see in a sheep dog competition … except in this case the dog was minding its own business and the “sheep” were going through the motions anyway. The coyote was intent on digging and mousing, while the pronghorns didn’t know quite what to do. They continued to follow and circle the coyote, which eventually got tired of the attention and trotted off.

But no, that wasn’t quite it for the day. Just past Pebble Creek a small grizzly bear grazed at roadside. And at Lower Barronette, a black bear wandered up and over the hill.

It was one heck of a day. Definitely the best of the trip so far!