From here on out I’m leading tours in the park, so reports will be truncated.

Day 14, May 24
A transit day, dropping off Jenn and picking up my client. Most notable sightings were a badger in Little America in the morning, a cinnamon black bear coming to the river in the Lamar Canyon in the afternoon, and insane amounts of tourists everywhere. 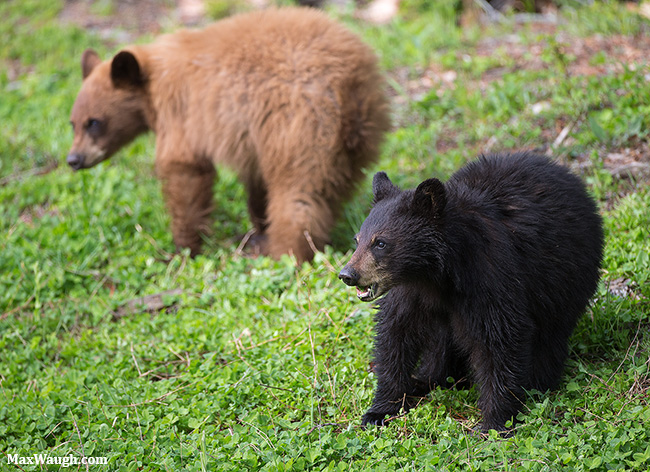 Day 15, May 25
My client’s main goal for this short private tour is wolves, and I was relieved to actually find some.

We had five Lamar Canyons approaching some elk early in the morning on a high ridge (close enough for a few decent cropped photos) and then a lone wolf, later identified as 911M, around 10am or so. In between we had a fantastic session with a lone boar at Rainy Lake (back scratching on a tree) and the “Mixed Sow” at Calcite Springs. I claimed the last spot in the pullout and we were able to sit at the vehicle and photograph the bear family foraging for well over an hour at about 20 yards.

Day 16, May 26
We switched things up on Tuesday, trying for a potential wolf encounter down south. 755M has been seen north of Hayden Valley quite frequently, so we spent most of the morning checking out a few different areas down there. No luck. In fact, Hayden and the Lake area were very quiet. We had a very small grizzly bear (probably a two year old just booted by its mother) cross the road in front of us, and later a herd of bison crossing the Yellowstone River. Here, two older bison shield a youngster from the current.

In the afternoon, we returned north, hoping the Lamar Canyons or 911M might reappear. No such luck. We did pass the time shooting a very slow, stalking coyote on the Slough Creek Road, and a cute black cub of the year at Elk Creek before the rain came in. Our final couple hours in the Lamar were virtually washed out by the constant rain, so we returned to Gardiner a bit early.

One more day with my client to find more wolves!