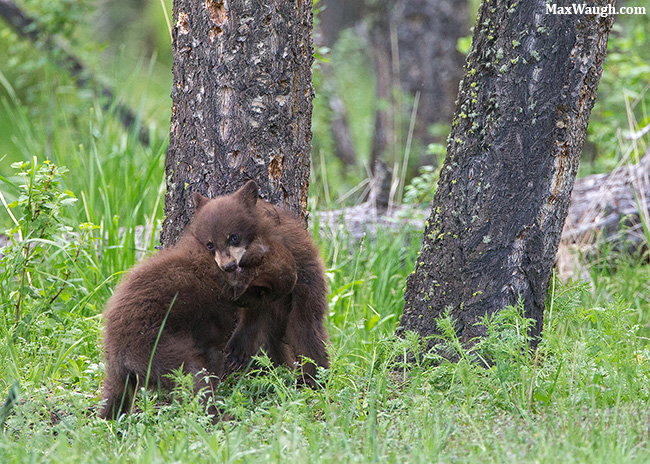 Day 19, May 29
Even though it was my last day of “freedom” before my group tours commenced, I chose to sleep in. I won’t have many opportunities to do that in the coming weeks.

We got a late start, but still saw a black bear just inside the NE gate, bighorn ewes (with my first lamb of spring) and marmots near Calcite Springs, coyotes hunting in the Lamar and Rosie and her cubs near the Yellowstone Picnic Area. I was told she later crossed the bridge back to her usual haunts, without any loss of human life.

In the afternoon I did some scouting, coming up empty at Trout and Buck Lakes, checking on a few bird nests and finding several different black bears.

Day 20, May 30
This was the day I picked up clients in Bozeman, so no photography took place. I did see black bears at Roosevelt and Floating Island on the way out.

Day 21, May 31
Day One of my first group tour was eventful. We started the wildlife tour with—gasp!—a lovely sunrise shoot on Blacktail. The first real wildlife goal was actually to reach the eastern Lamar to check on the wolves. There was a strong radio signal, but they weren’t in view.

The rest of the day was monopolized by a couple of interesting bear sightings. The sow with cinnamon COY was out in Little America. We spent at least four hours waiting for her to come down for a drink, but instead she grazed while the cubs roamed just a bit too far and behind several trees. However, we weren’t bored by any means, as we also had a pronghorn with a fawn behind us, bighorn sheep that bisected the crowd, mule deer and a red-tailed hawk flying overhead.

There was also a non-stop chase in the nearby pond, as an angry coot kept trying to drive a cinnamon teal out of its territory (which, presumably, occupied the entire pond). The teal refused to leave, so there was a lot of splashing and flying throughout the morning. 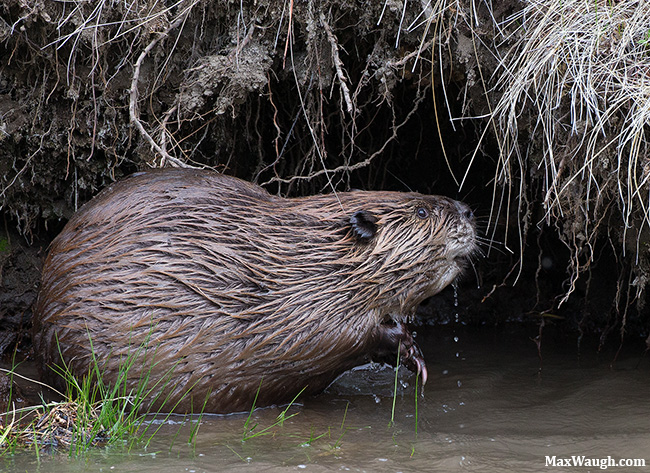 The most exciting moment of our bear session (which made the wait worth it) was when the sow climbed a tall dead tree to investigate a bluebird nest. The birds were not happy, and the cubs followed mom up the trunk to see what the excitement was about. It’s uncertain whether she actually succeeded in her quest, but it was cool to see nonetheless. Well, maybe not from the bluebirds’ perspective…

At Tower we had a peregrine falcon flying overhead briefly, and at Elk Creek the sow with single black COY was very close to the road, but difficult to photograph through the trees.

On the way home, we spotted our first elk calf briefly at Mammoth.

Day 22, June 1
What a great day. We started a bit later in order to find black bears at Tower and were rewarded with a Rosie + Three sighting near the road at Rainy Lake. When we left, the whole family was climbing a very short pine tree, perhaps investigating bird nests like Sunday’s bear?

In the Lamar there was loads of wolf action. The Junction Buttes had killed a bison in the middle of the valley. When we arrived they were being chased about by part of the herd while other bison “paid their respects” to the carcass. Further east, we had missed 926F of the Lamar Canyons crossing the road at Hitching Post, but did get to see alpha male Twin and a yearling out near the creek. Another good wolf day, who knew?

We had two badger sightings, including a photo session at Roosevelt. This was high on many of my clients’ lists, so it was a thrill despite the poor light. In the afternoon we got another “first” for some folks, a beaver by the Confluence. We also just missed the Lamar Canyons crossing the road yet again. We could see them out in the flats, but a big nasty storm drove us away and back to Gardiner.