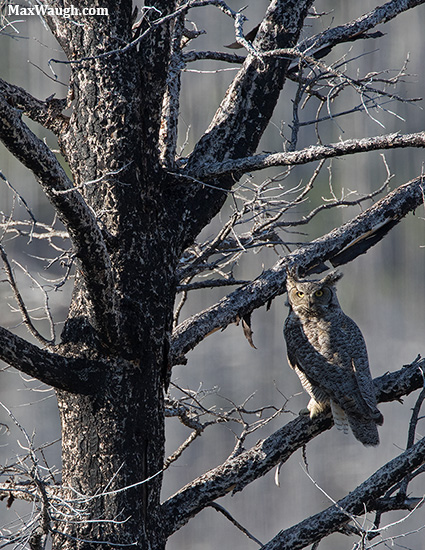 Day 23, June 2
A long and exhausting day. Any day that starts at dawn in Hayden Valley is like that. Unfortunately, the fog lingered through much of the morning, so visibility was non-existent for a while. The Lake area was beautiful, but no wildlife aside from geese and bison appeared in the morning mist. Really hoped for a grizzly, but it wasn’t to be.

We did have some interesting sightings. A client spotted a great horned owl from Lake Butte Overlook drive. We had a fox cross the road south of Lake Village. And I spotted a bull moose just inside the east entrance. We saw several Western grebes near the lake and in Hayden, and a Swainson’s hawk in Hayden as well. Oh, and a pine marten! That was at Fishing Bridge, but it disappeared before we could get photos. Typical marten sighting.

Toward the end of the day, a very rowdy herd of bison put on a show in some nice afternoon light in Little America.

Day 24, June 3
We had a number of interesting bird sightings on Wednesday. Two circling red-tailed hawks during a hike in Little America, nice yellow-headed blackbirds at Slough, a juvenile bald eagle at close range in the eastern Lamar and the great horned owl nest in the Beartooth as initially reported by drucker. We also had a mountain goat on the Beartooth.

Day 25, June 4
We had a great morning, with lots of photo opportunities to make up for the last couple of semi-slow photo days. Before we touched our cameras though, we had what I believe was a long-eared owl fly over the road south of Indian Creek—only the second I’ve ever seen in the park–along with a great horned (yes, another one!) perched near the start of the construction zone near Grizzly Lake.

We made it to Hayden and were relieved to see a bit less fog. A foursome of trumpeter swans was feeding near the road. This may have been the same cygnets we saw during my fall tour, shortly after they had been released to the wild nearby. Part-way down the valley, we finally got a grizzly bear, the lone remaining star we’d yet to see during this tour. Before it crossed the road, it gave us some nice views, since it was walking right into the sunrise.

Afterward, we had good sessions with pelicans, grouse, an eagle and short sightings of a roadside osprey, a dark morph red-tailed hawk and a kestrel.

The afternoon session went well too. A couple of black bears made appearances, including one chasing the bighorn sheep at the Picnic Area. We closed things out with another animal that was high on everyone’s list: a red fox. We had just missed the Rainy Lake Fox earlier, but finally got it near the Roosevelt corrals.

Day 26, June 5
A day with very few sightings, but one of them was fantastic. We were fortunate to have one of the Lamar Canyons within 100 yards of us near the road east of Soda Butte.

It was a nice way to wrap up a very fun week with my clients. Big thanks to Sheila, Bill, Dee, Jack, Rick and Steve for a great time!

I’ll be back in the park starting Monday with my next group.