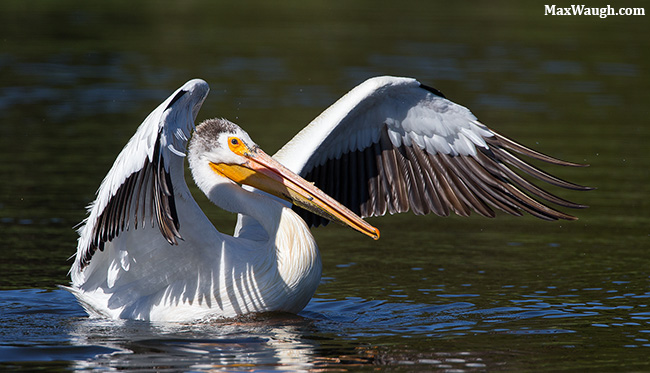 Day 30, June 9
I marked a full month in Yellowstone with a super early wake-up call.  I have to give kudos to my clients, who are willing to hit the road at 4:15 in the morning just to get down to Hayden Valley for a sunrise which may or may not be visible and photographable.

This morning was sort of iffy.  Too much fog at first, but when the sun finally burned through we had few subjects to shoot.  We did have the four young trumpeter swans at Alum Creek.

Unfortunately, between there and the Lake, and all the way out to Lake Butte Overlook we had no grizzly sightings.  This area remains quiet in general for bears.  We did have an exciting discovery though.  The great horned owl that we spotted during last week’s tour from Lake Butte Overlook was back, and I spotted an owlet perched on what we had suspected was a nest site!

The owlet perched for a short while before disappearing into the tree cavity.  The adult owl, as it tends to do, flew off to more distant trees, away from the attention.

Overall it was a good bird morning, as we capped things off with an excellent shoot with a trio of pelicans at Gull Point.  Some scaups also provided great viewing at close range. 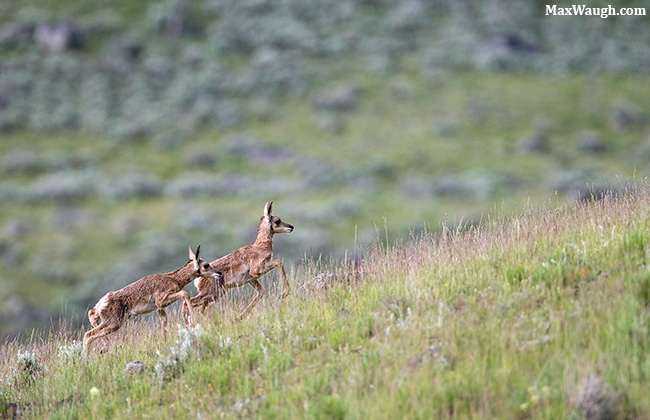 The mammals continued to challenge us though.  We had a weasel cross the road in front of the vehicle, and though I was able to find a pulloff almost immediately, we couldn’t find the rascal.  Later, while at Gull Point, we just missed another weasel crossing!  In that case as well, it seemed there was no place for it to hide near the water, but somehow it eluded all searches.

The afternoon drive was highlighted by my closest encounter to date with the pronghorn twins in Little America.  While concentrating on the pronghorns, a black bear roamed a distant hillside behind us.  We also just missed sightings of black bears on the Tower Road, at Calcite Springs and at Elk Creek.  We finished the day off with a brief session with bighorn sheep at Phantom Lake.

Day 31, June 10
We headed to the Lamar first thing to check on the status of a dead bison that had been discovered yesterday.  The bison had died of natural causes, and the carcass was dragged from the road and “opened up” by rangers to attract scavengers/predators… but there was nothing happening on it this morning.  Meanwhile, we apparently had missed a black wolf in the dark from about 70 yards back at Phantom Lake.  Not a great start.

But it got better.  We witnessed a fun and fascinating interaction between a coyote and several bison calves.  The calves grouped together to chase the coyote about, as their parents looked on with feigned interest. 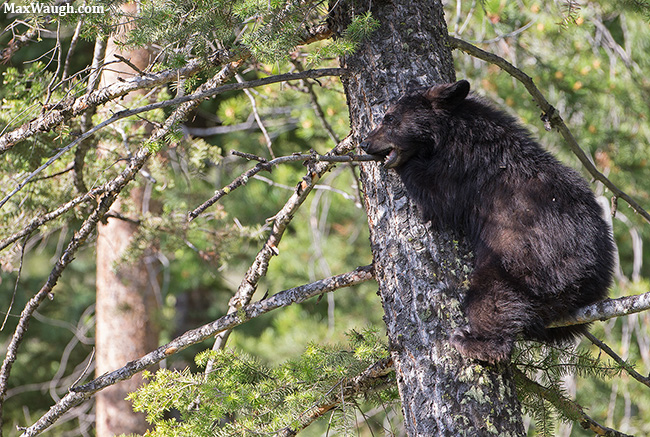 Next, we arrived at Calcite Springs to find Rosie and her cubs right next to the road.  In fact, it was the exact same spot the Mixed Sow was at back on Day 15.  Good grazing there.  At one point one of the cubs decided to climb a tree and chew on the branches.

We spent some time photographing the bears with the rest of the crowd until the LE rangers arrived to fully clear the area and encourage the bears away from the road (unlike the Mixed Sow, guns and noise makers weren’t necessary with Rosie).

Before leaving the area, I showed my clients the peregrine nest (one chick visible), bighorn sheep with lambs across the canyon, and the close perch the violet-green swallows like to use.

From there, we went to Hellroaring, and quickly secured some pika shots while being eaten alive by mosquitos. 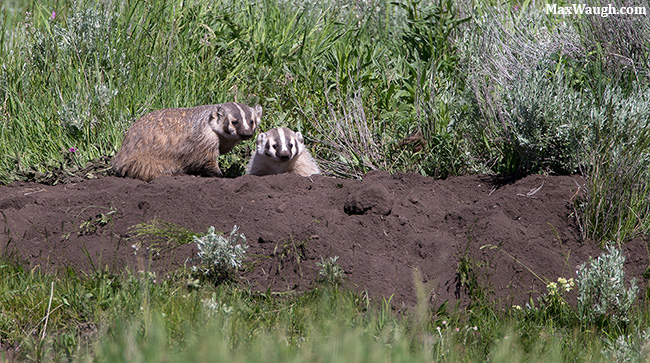 Today’s only “planned” activity was a trip up the Beartooth, so we turned northeast.  On our way through the Lamar, we encountered a coyote right near the road.  It was a bad spot to stop for photos, so we turned around and backtracked, hoping to find a good pullout with a view.  Unfortunately, the coyote headed away from the road, so that opportunity flew out the window… but another opened.  A badger crossed the road in front of us!

This time we could park and get out.  The badger was really hightailing it after it crossed.  I’ve never seen one move so fast.  Having seen where it disappeared into the sage, we ventured out on foot, hoping to get a glimpse.  The next view was from nearly 75 yards away.  This badger was on a mission.  Luckily, I saw it enter a hole, so we could slowly approach to within 35 yards or so and snap some quick photos before we departed.

On the walk back to the road I found… another badger!  This one was slumped on a large dirt mound.  So we got more badger photos than we bargained for.  Then we returned to the car and were packing up when I saw something strange back at the badger site we had just departed.  A whitish head was peeking out.  A kit!  So this was an actual sett (den), not just a hole.

So we unloaded everything we had just packed up and set back up to get badger family photos.  One coyote sighting had turned into three separate badger shoots within 20 minutes.  I’m pretty sure the badger jam we caused lasted through much of the afternoon.

We did make it up the Beartooth, but didn’t see much beyond marmots, a single pika and some deer.  Our ride back was filled with thunderstorms, and little else in the way of sightings (aside from a sow with two COY west of the Tower ranger station… a new bear family for me this spring!).