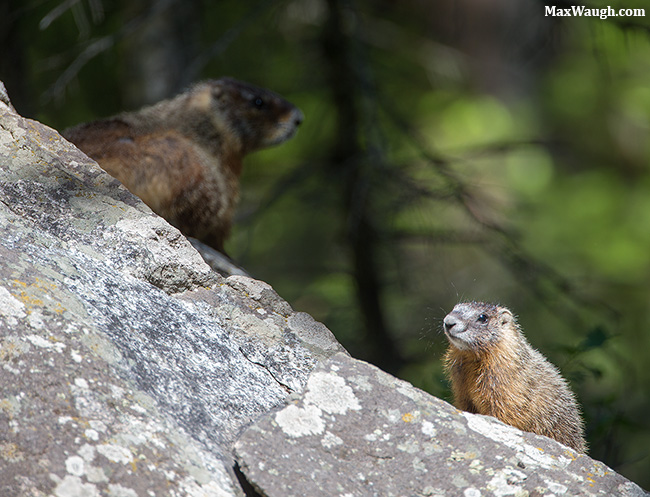 Day 32, June 11
Thursday was a long day.  We spent the early morning at Swan Lake Flats.  Lots of interesting misty scenery, but few animals up there.  We did photograph the ravens in Golden Gate before heading south to Norris to check on the fox den close to Gibbon Falls.

We were fortunate to see two kits, though it was still very foggy, so the photos are a bit washed out.

On the way back north, we photographed baby marmots near Rainy Lake, which was fun.  Unfortunately, on the way down the road we found another adult marmot—which also had babies—dead after being struck by a vehicle.  Not sure the future is bright for those little ones.

In the afternoon we went all the way to Hayden and the Lake.  Once again, no grizzlies, but we did see three great horned owlets at the Lake Butte Overlook nest.

Then we returned to the fox den, having already missed the action earlier in the afternoon, and waited a while.  Our dinner deadline came, forcing us to leave, and I later heard that they emerged pretty soon after we left.  Another attempt is in the cards on the final day of the tour Friday! 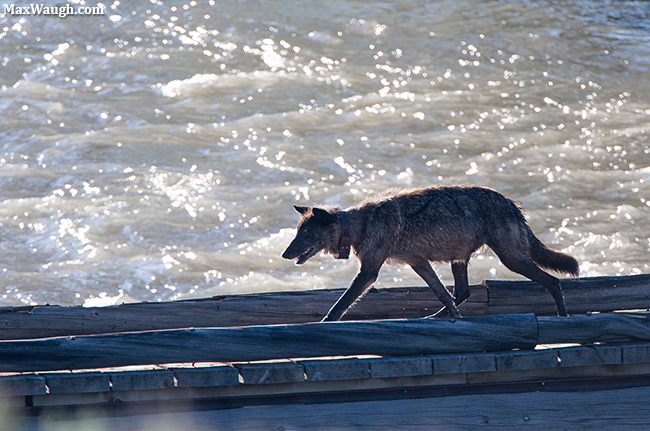 Day 33, June 12
What a morning.  For the third tour in a row, I’ve lucked into a great wolf sighting to finish things off.  This time, we had 926F of the Lamar Canyons cross within 40 yards at the Footbridge lot.  She was completely backlit, but it was still a great, intimate experience for all present.

There were three other wolves in the area.  We were able to see a black yearling, gray 965M and alpha male Twin as well.  Twin once again crossed east of Soda Butte, as he did a week ago on the final day of my last tour.

That wasn’t the only action in the eastern Lamar.  As the wolves were deciding where to cross, Scarface announced his return to Yellowstone!  He’s been up and out of the park, a good 14 miles beyond the NE entrance in recent weeks.  Someone saw him out there two days ago, so he trekked a good 25 miles or so the last couple days to arrive on the scene this morning.

In addition to Scarface, we had a distant grizzly sow with cub of the year in the western Lamar.  I wonder if this could be the “Slough Creek sow” who had three a few weeks back.  She had already lost one cub, and if she lost a second, she may be eager to explore new territory.

Folks were still lined up at our badger sett, but we didn’t stick around to see the family again.

In Little America we found a pronghorn family.  While watching from a nearby hillside, the doe crossed the road, but the fawn was intimidated by the traffic and turned back.  When we left, they were separated by a couple hundred yards, so hopefully there will be a reunion. 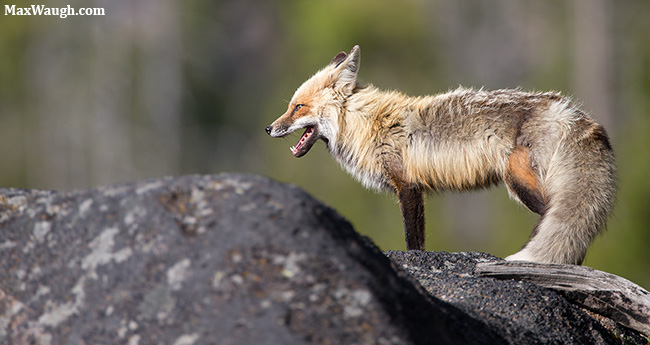 To top it all off, the black sow with two cinnamon cubs came down for a drink of water to the large pond in western Little America, just as they had on Day 11.  This time we were just a bit too late, or we would’ve landed shots of them parading to the water again.  Instead, we had to live with seeing them after they got a drink (and mom took a swim), going back up the hill.

Amidst all that we even squeezed in a yellow-headed blackbird shoot at Slough Creek.  It was one heckuva morning.

For the afternoon, we had one main goal in mind: to try for the fox den again.  We did take a circuitous route to get there, wanting to avoid the construction zone and to see if we could find any bonus critters on the way south.  There wasn’t too much going on during the mid-afternoon commute, but we did have a chance to wave goodbye to Rosie as we passed by Calcite Springs.

We arrived at the fox den site and set up.  The wait lasted maybe an hour, but we finally got to see an adult arrive and the kits come out and go nuts for a bit.  Due to the sight lines and angle (and general madness) it was difficult to get great photos of the whole family.  However, the adult did pose nicely for us on top of a couple of boulders.

It was a fantastic end to the best day of this tour, and a nice way to end the week.  Big thanks to my clients Betty, Brian, Leighton and Pat for a fun time!

Saturday I return this group to Bozeman and pick up my final clients of the spring.  It’s a week-long private tour, so there’s still a lot of action left on this adventure…