Day 34, June 13
Saturday was my drop-off/pick-up day, so I didn’t make it into the park.  I did get some interesting reports about new carcasses and other activity, so hopefully there’s some good action for my final group on the horizon. 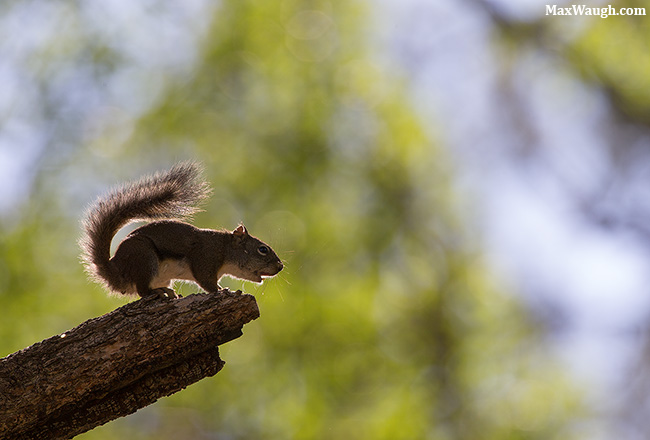 Day 35, June 14
I’d heard about a grizzly bear parked at Blacktail Lakes on Saturday, so Sunday I allowed for a slightly later start so we could get to the site at dawn.  We didn’t find the bear.  Instead, we had six wolves!  This time, the wolves were a bit far and it was still a bit dark for photos, but it was still very exciting to see that many wolves together.  Presumably they were from the Prospect Peak Pack, which would be the first time I’ve seen any of those pack members.

It was a heck of a way to start this tour, and things didn’t let up for a while after that.  We got our first bears near Hellroaring, a courting cinnamon boar and black sow.  At Roosevelt, Rosie and her cubs were running across the open meadow.  Six wolves and six bears in the first hour!  At one point they chased off a confused coyote that had been out hunting in the grass.

I thought maybe she was heading toward the bridge, so we drove down that way.  At the very least, I could present my clients as an offering to the Bloodthirsty Bridge Bear Goddess (that’s a joke, folks).  I was hoping to see them come out of the trees onto the hill above the road, but Rosie gave us the slip.  Later we learned she had been see all the way over at Wrecker, so she did cross the river at some point, perhaps down below.

We spent some time with the bison herds in Little America.  Sandhill cranes pecked away at the ground with their single youngster in tow out in the flats to the north.  The Lamar Valley was actually the quietest spot of the morning.  We buzzed through twice with little to show for it.  The wolf watchers were scarce, so I can only assume the Lamar Canyons were out of town.

Back on the Tower Road there were no bears, but we did stop to photograph the marmot family near Rainy Lake.  A territorial red squirrel was chirping loudly and emitting alarm calls nearby. 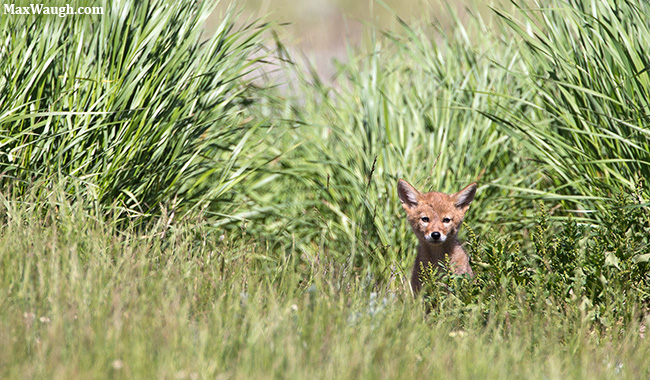 On the way back to Gardiner, we spied a mule deer with two fawns, my first of the spring.  We also passed a black sow with at least one cub not far from Phantom Lake.  This was probably the Phantom Lake sow with two that’s been in the area for several weeks.  They were bears #7 and 8 on the morning.  We picked up #9 with the grizzly bear at Blacktail, which remained well-hidden behind long grass.  This had been a tremendously active morning and a fine way to introduce my group of Yellowstone newbies to the park.

Last night I learned that the fox den we’d photographed in recent days had been shut down by the park service.  Too many traffic issues meant we could no longer visit that roadside den.  So without a fox den, I had to come up with the next best thing this afternoon: a coyote den.  I’d had a report of this den site, but when I went to investigate last week, I came up empty.  I was going to search again, but that wasn’t necessary today.  When we pulled up, I could see an adult coyote and several small reddish shapes from the road.

We were able to have a nice shoot with some of the pups.  Even though we set up about 50 yards from their original position, they occasionally popped out at closer range.  It’s the first coyote den I’ve seen and photographed in several years, and was a nice treat given that the fox den is no longer an option.

Afterward, we returned to the Tower Road and were pleasantly surprised by Rosie’s family near Rainy Lake.  They had apparently crossed back over rather quickly, and we were fortunate to see them come down to the lake for a drink.  Rosie took a short swim amidst the long grass before getting out and resuming a family grazing session.

Our final sighting of the day was the twin pronghorn fawns in Little America.  Lots of babies today!