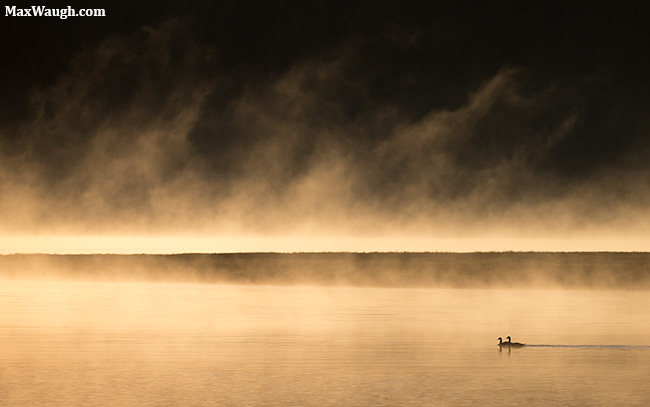 Monday morning featured a Hayden/Lake excursion, which meant a super early wake-up time.  We passed a courting pair of black bears on the way up Dunraven, but it was still quite dark for photography.

In Hayden Valley, all was quiet.  Wolf watchers were setting up at Grizzly Overlook (we later learned 755M crossed the road a couple hours after we passed through).  There were no bears to speak of.  We did stop to photograph the trumpeter swans, in their usual place at Alum Creek.  This time, the foursome had been joined by two other swans.  I’m guessing they were fully mature adults, since they kept bullying the youngsters and chasing them away from some prime feeding spots.

The Lake was equally quiet.  Even my great horned owls were hiding.  We did spot two grouse at Lake Butte Overlook, but they were being timid and wouldn’t offer up any displays.  Despite a number of stops for other searches (owls, foxes), we largely came up empty.

Even Yellowstone Falls, so reliable with its 9:30 spring rainbow, was somewhat dull due to cloud cover.

We did have a couple more bear sightings.  A large grizz wandered far out in Hayden on the way back, we had a small cinnamon—perhaps a yearling who’d just been kicked to the curb by its mother—at Antelope Creek, and the Phantom Lake sow was grazing in the flats (no sign of the cubs).  At Calcite Springs we were able to see a couple of bighorn ewes with lambs on the opposite side of the canyon.

In the afternoon, we passed the Phantom Lake bear family (the cubs were lost in the thick grass and traffic was a mess, so we kept going), but we did manage to find some nice bear photo ops beyond Roosevelt Junction.  Unfortunately, some very nasty weather rolled in on all sides, so our afternoon was cut short and we made a beeline back to Gardiner.  Just before leaving the park, we were able to watch an osprey dive for a fish in the Gardner River.  Unfortunately, the entry point was obscured by a bank of grass, so we just missed photographing the peak of the action. fake minnesota id. 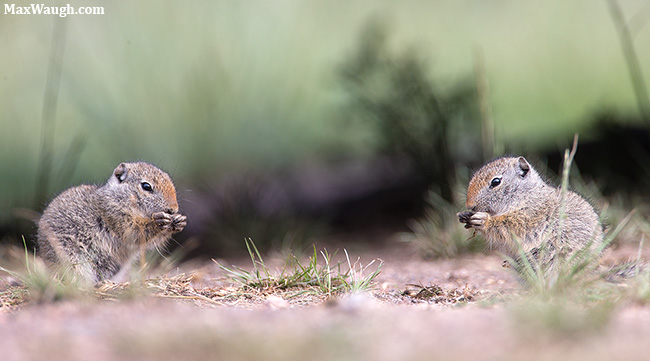 We switched things up this morning by heading to Swan Lake Flats for sunrise.  Lovely sunrise, very little in the way of wildlife.  On the Upper Terrace Drive we did have a deer posing among the terraces as she was licking (yes, licking) the trees.

So we got a late start out to the northeast.  A grizzly sow with two cubs was on the northern slope of the Lamar, nearly in the same place as the sow with single cub we saw recently (perhaps one of the cubs was obscured, or it’s simply a different bear?).  At Slough Creek we photographed some baby Uinta ground squirrels.

On our way back east through the Lamar, we just missed Lamar Canyon alpha male “Twin” crossing the road.  Since it wasn’t the last day of this tour, I couldn’t expect to have great wolf luck yet, so we were able to live with the near miss.

We hiked to Trout and Buck Lakes.  All quiet but for an osprey.  No sign of otters (even scat).  After lunch in Silver Gate, we ventured up to the Beartooth.  Some real nasty weather rolled in, but instead of turning back immediately, I opted for a short nap.  Fifteen minutes later the skies were magically clear and we were able to continue on.  Good thing we waited.  We saw a few pikas and marmots toward the summit, and then I was able to spot several mountain goats bedded against the cliffs.  We hiked down and were able to photograph them at relatively close range.

In the afternoon we stopped at the coyote den after briefly seeing Rosie at Rainy Lake.  No action at the den site, so we called an end to another successful day.