Day 38, June 17
This was the type of morning that lulled you to sleep and then exploded in your face. 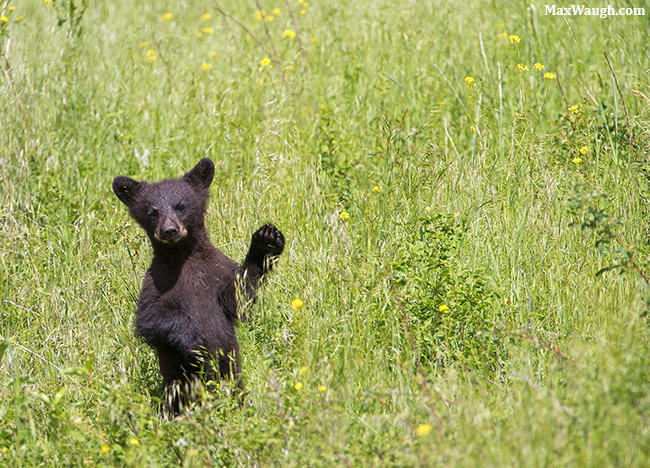 For the first two hours of our morning drive, we found absolutely nothing to photograph.  Then things started to simmer a bit.  The grizzly with two cubs was north of the road in the Lamar again, this time a little closer to the road (you could tell it was a bear and actually see the cubs).  They crested the hill and disappeared, but not before scaring the daylights out of a pronghorn.

We packed it up and headed east, only to hear that a gray wolf had crossed back at the grizzly spot just after we left!  By the time we returned, the wolf was gone.  It was a collared gray, so I guessed it may be 911M, the alpha male of the Junction Butte Pack.  He has been roaming far and wide, including in the western Lamar in recent weeks.

So for the second day in a row we just missed a wolf crossing, and we were still looking for something to photograph.  I took my clients to Slough Creek, where we could spend a little time photographing the yellow-headed blackbirds.  On our way out, we heard about a wolf crossing the bridge below Slough… another near miss!

We hustled over and as we crested the hill to head down to the bridge, I could see a distant shape moving west across the hillside above the road.  We drove down past the road and I looked back, and sure enough, there was a wolf silhouetted against the ridge.  It was gray, with a collar.  911M again.  This silly wolf had crossed over to the north in the Lamar, and then doubled back south somewhere at Lamar Canyon to cross the bridge.  It seemed he couldn’t make up his mind.

We were able to get a few decent photos as he walked through the sage.  Soon he crossed paths with a black wolf, IDed by the wolfers as 970F (also of the Junction Buttes).  For some reason, they barely acknowledged each other.  She headed east, while he eventually continued westward.

Following the wolf excitement, things really began to pick up.  While taking a break at the Yellowstone Picnic Area, I saw my first-ever Yellowstone hummingbird (perhaps a Calliope, which I’ve photographed in the Tetons).  We had a bluebird jam further west in Little America (adults were feeding fledged youngsters), and a bull moose at Petrified Tree Drive.  And just beyond the moose sighting, the black bear sow with single cub of the year were right near the road.  At the bear jam, one “brave” individual walked away from the crowd and up the hill to within 20 yards of the bears.  This person, ironically, was driving a hearse through the park…

We finished the morning off with a pika shoot at Hellroaring, even seeing a juvenile while we were there.

The afternoon went in reverse, with action right off the bat before tailing off.

Just inside the north entrance, I finally saw some sheep in Gardiner Canyon.  What is normally a hot spot in spring has been largely devoid of sheep the last several weeks.  Even this group, comprised of several juvenile rams and a few ewes, was not showing off cute lambs as is usually the case at this time of year (at least one or two of the ewes did look pregnant).

At Mammoth we checked for owls, which my client Rob spotted on the roof of one of the east-most buildings.  The owlets huddled together near a chimney while one of the adults perched in a tree further down the street.  I’ve had few encounters with this family since the owlets fledged, so it was nice to spend a bit more time with them.

At Hellroaring we spied a moose working its way through the woods, but after that things died down significantly.  We worked on badger and fox, neither of which we’ve seen this week, to no avail.  Eventually we were forced to turn back for Gardiner.  The coyote den at Phantom Lake remained quiet as we drove past.  Our final sighting was a grazing cinnamon bear just before the high bridge at Mammoth.