Author’s Note, March 29, 2022: Seven years after I first published this article, it remains the most popular page on my website. I have updated it to include new and larger photos, and continue to welcome comments and questions below! I have also added a reader note regarding nutria at the bottom of the page.

Every spring when I visit Yellowstone, it’s a tradition to hike to Trout Lake to search for river otters. Trout Lake is historically the most reliable spot to see otters in the park, but the best time is generally in early summer, not spring. Usually around mid-June visitors begin to see otters at the lake with relative frequency. This happens in large part due to the trout spawn, which provides an easy source of food for the otters and their pups. The spawn lasts into July, giving people a few good weeks of otter fun.

The question of otters at Trout Lake is not usually if, but when? When will the otters arrive at the lake (which is often frozen over into late spring)? When will the pups–if there are any–make their debut? When will the trout enter the inlet to spawn so we can get close views of the otters chasing, catching and eating them from only a couple dozen yards away?

Sightings in May and early June are not common, but I always try to get up to the lake (as well as neighboring Buck Lake) to see if I can get lucky. Though you never see otter pups that early, I have found adults in both lakes during past spring visits.

This May, I made my usual early hike up to the lake, but didn’t see any sign of them. But in early June another park visitor wrote in his online trip report that he’d seen an otter at Trout Lake. So my hopes were buoyed, and I returned to the lake a couple times with clients in subsequent weeks in hopes of getting lucky. We found nothing. Even by the third week of June, there was no sign of the otters, not even any scat. I figured it was just bad luck. Time of day seems to matter very little to otters. I’ve seen them out at 6am and 6pm. I’ve seen them out at 8:30 in the morning, and 2:30 in the afternoon. They come and go as they please. So this year I figured I just missed them.

Fast forward a few weeks: the visitor who had reported the original sighting finally shared his photo of the otter. It was actually a muskrat.

Things started to make a little more sense at that point (e.g., why I couldn’t even find scat at the lake), and though I’m not a big fan of dashing dreams and hopes and tempering the enthusiasm that comes with “cool” sightings, I felt compelled to point out the correct animal ID. And that’s when someone else chimed in and insisted the animal in the photo was… a beaver.

This wouldn’t be the first time there’s been confusion when it comes to identifying these animals, and mistaken animal IDs in Yellowstone are quite common. Coyote vs. Wolf, Cinnamon Black Bear vs. Grizzly Bear, Juvenile Bald Eagle vs. Golden Eagle, Marmot (or even Wet Badger) vs. Wolverine. I’ve heard a lot of mistaken IDs over the years, and have certainly made my share of slip-ups when seeing some animals at first glance.

Muskrat vs. Beaver happens a lot. River otters sometimes get thrown in the mix, depending on what people hope they’re seeing. They’re all brown, furry and they swim well so the confusion isn’t too surprising. Can you tell the difference and identify the following three animals? 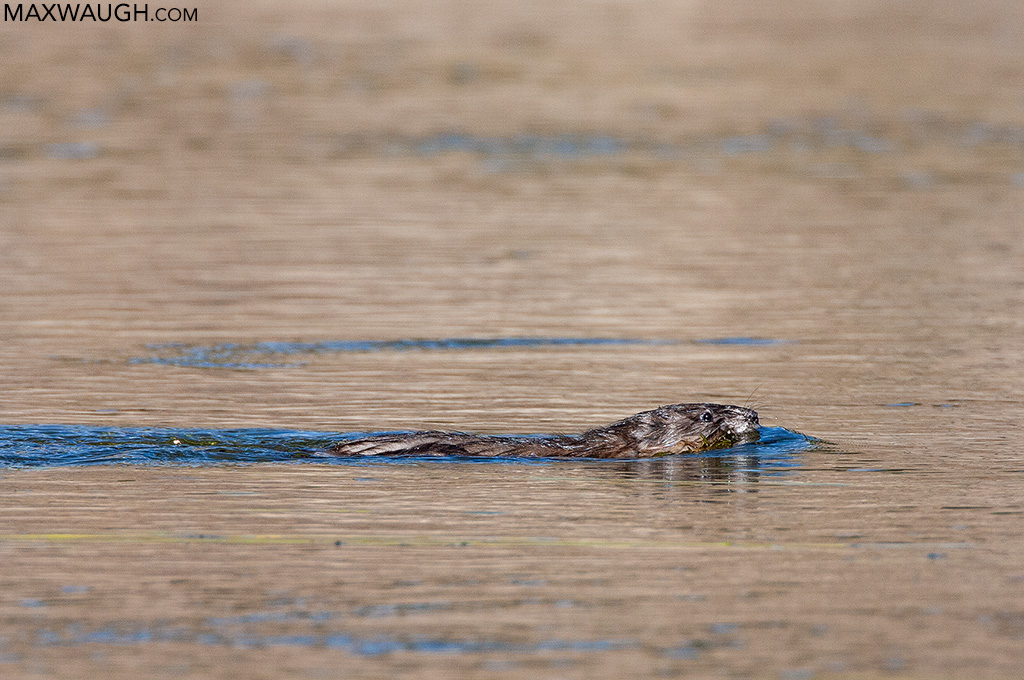 If you answered Muskrat, Beaver, Otter, you are correct. There are some similarities when they’re swimming, to be certain. But out of water, it’s a completely different story. 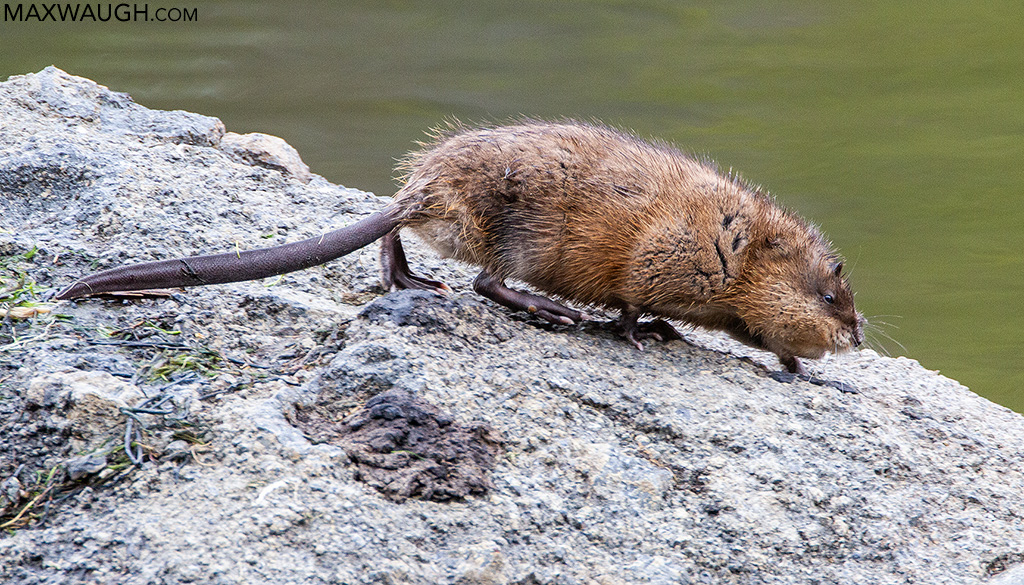 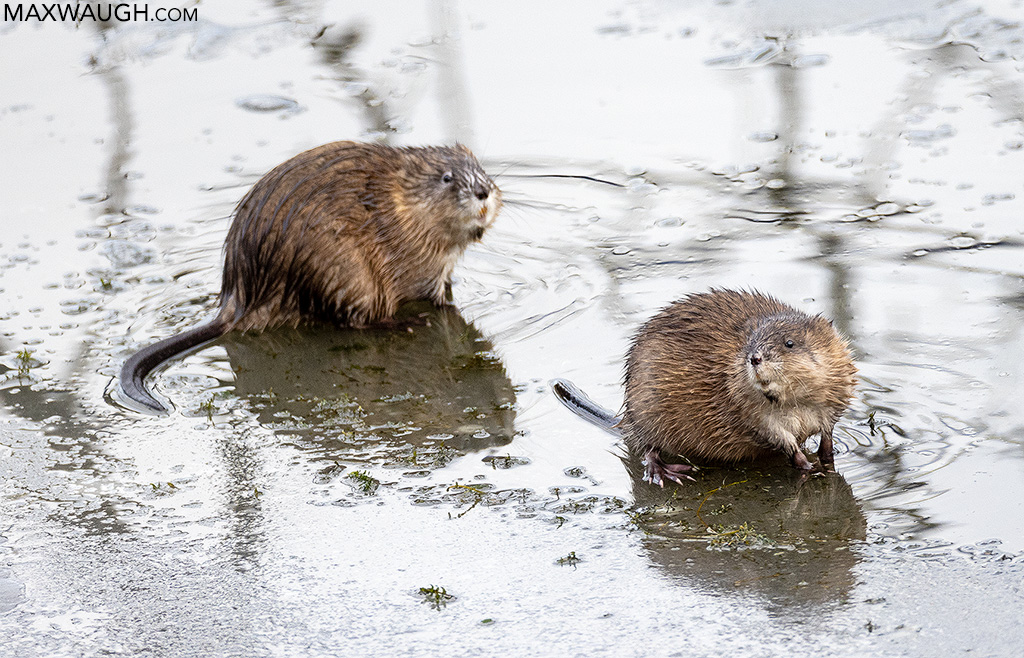 The muskrat is the smallest of our furry aquatic trio. Of course, we don’t generally have the benefit of a side-by-side comparison when we see these animals in the wild, so saying one is “big” and one is “small” may not help you much. But trust me, muskrats are significantly smaller than the beaver or otter (a difference of two feet in length–including the tail–versus three to five feet). Muskrats can still look beaver-like out of water, especially when they’re sitting, all balled up and fuzzy. But in the photos above, you can see the main difference between the two that will help with your ID (aside from size): the tail. Muskrats have a long skinny tail. Sometimes when they’re swimming, the tail may be curved slightly out of the water, or even pointing straight up, as erect as an antenna. 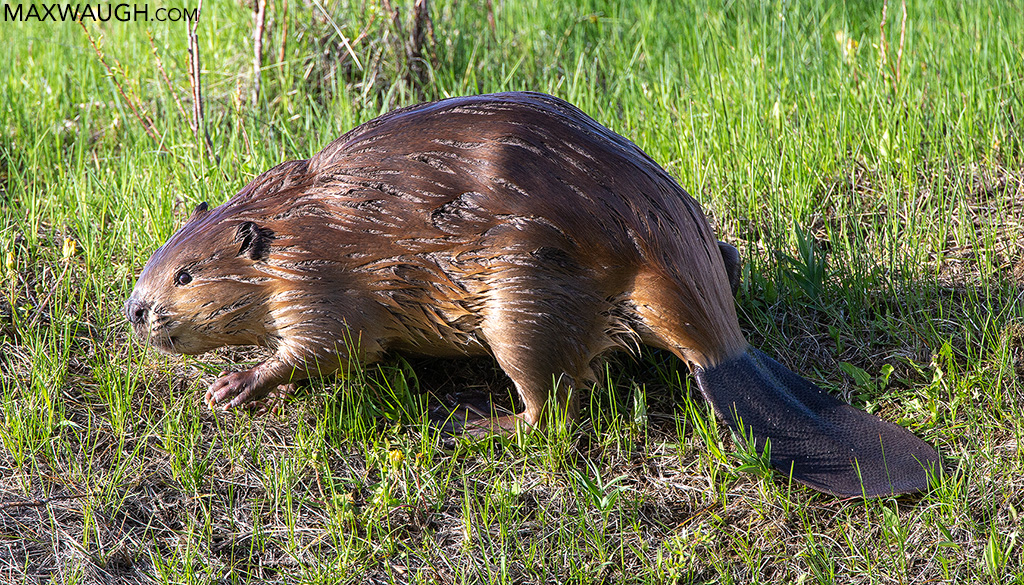 Look for that wide, flat tail, a dead giveaway that it’s a beaver. They’re also much more rotund than muskrats. And what about otters?

It’s a whole different body type when you see it out of water. First, they’re long and slender, looking downright “athletic” compared to the other two. When they run, their bodies practically undulate like a slinky. They’ve also got fur from head to toe to tail. No bare feet, and no scaly tail. Remember, otters are actually mustelids (members of the weasel family), while the muskrat and beaver are rodents. Like many weasels, otters are energetic and active. You can often ID an otter simply based on its antics! This, of course, is one of the main reasons they’re one of my favorite animal to photograph in the park. 🙂

What else differentiates an otter? Well, if you see it close up, the nose is very prominent on the face (even more than a beaver’s), and otters sport long bushy whiskers. I mean, really… is this an otter pup or Wilford Brimley? 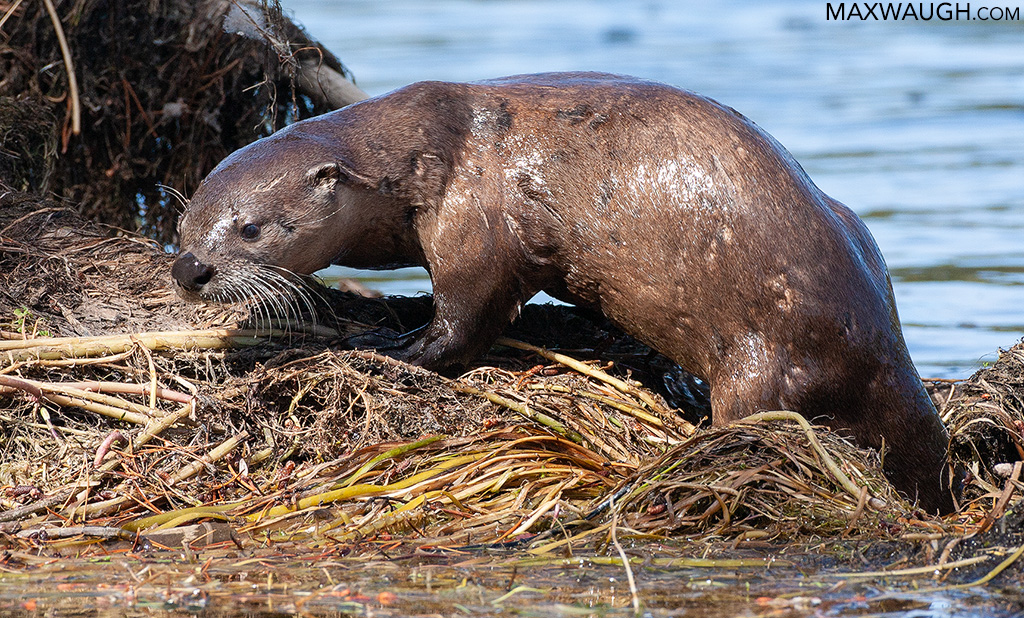 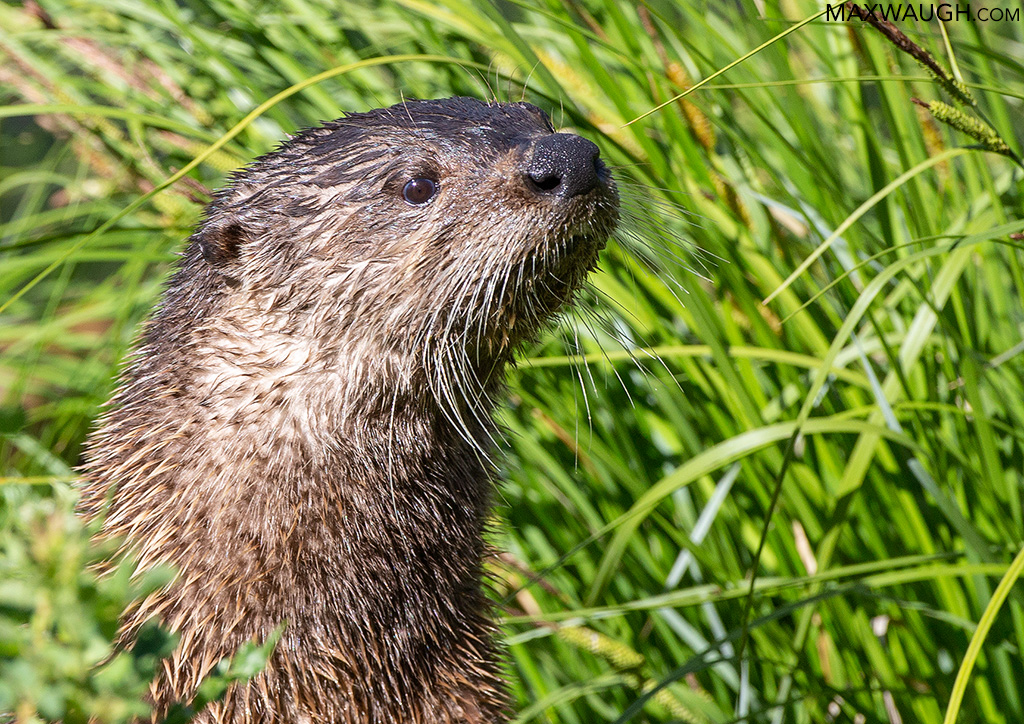 Visual comparisons on land are fine, but the original debate originated from a photo of a swimming animal. So let’s go back and look at a few more examples of these critters in the water, and identify a few final clues that can help you with your spotting. We’ll start with the muskrat and beaver, since they are the most similar in appearance. 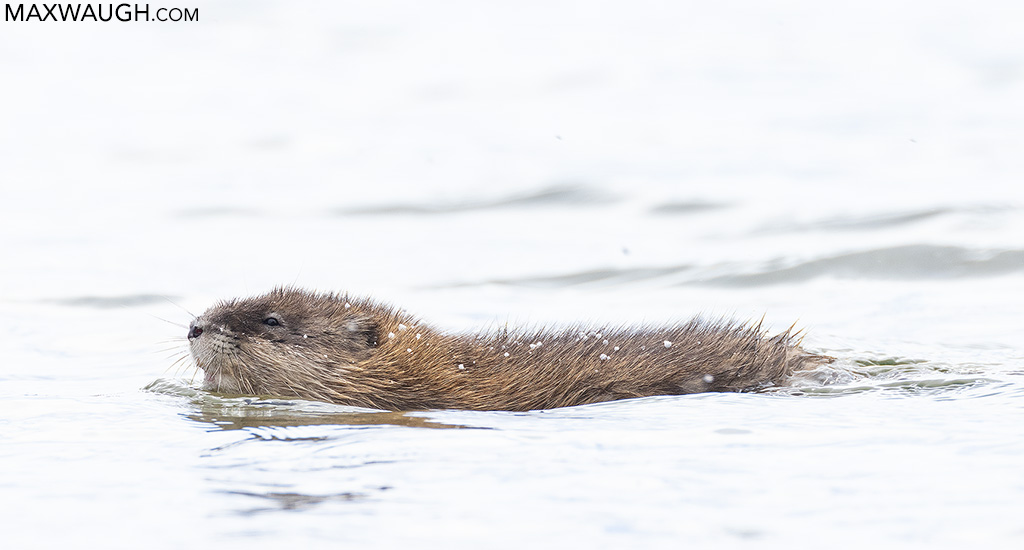 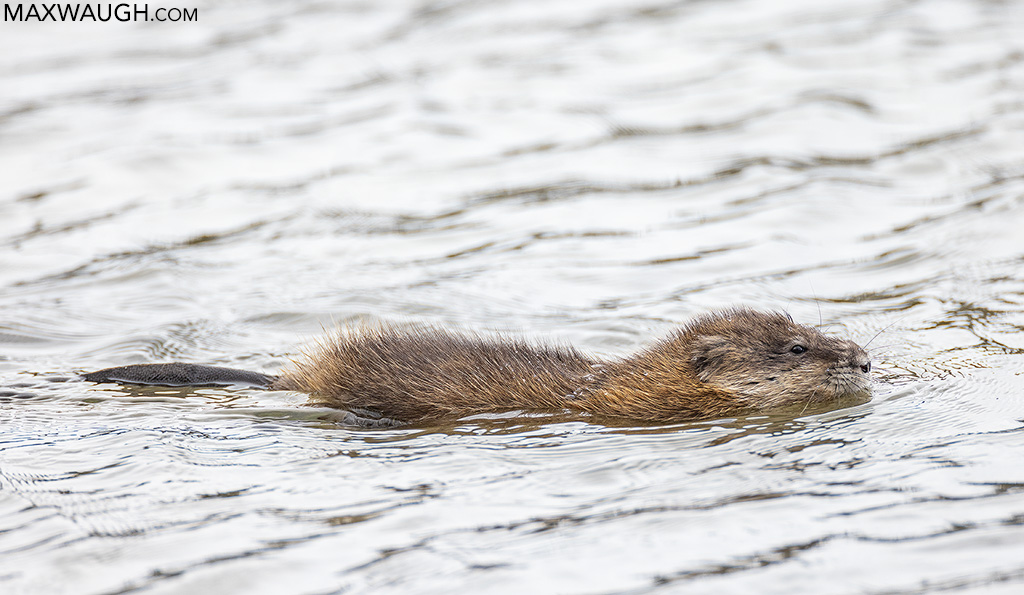 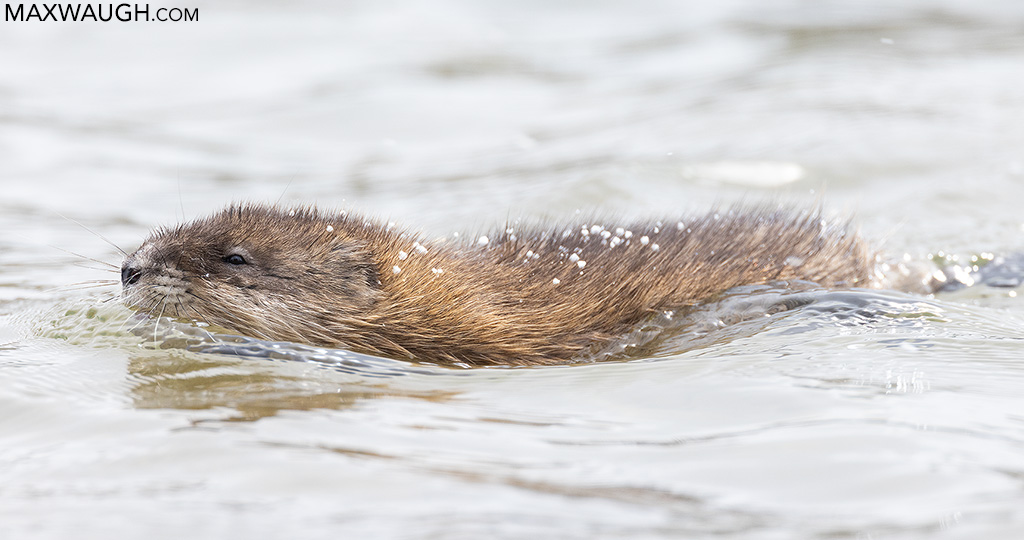 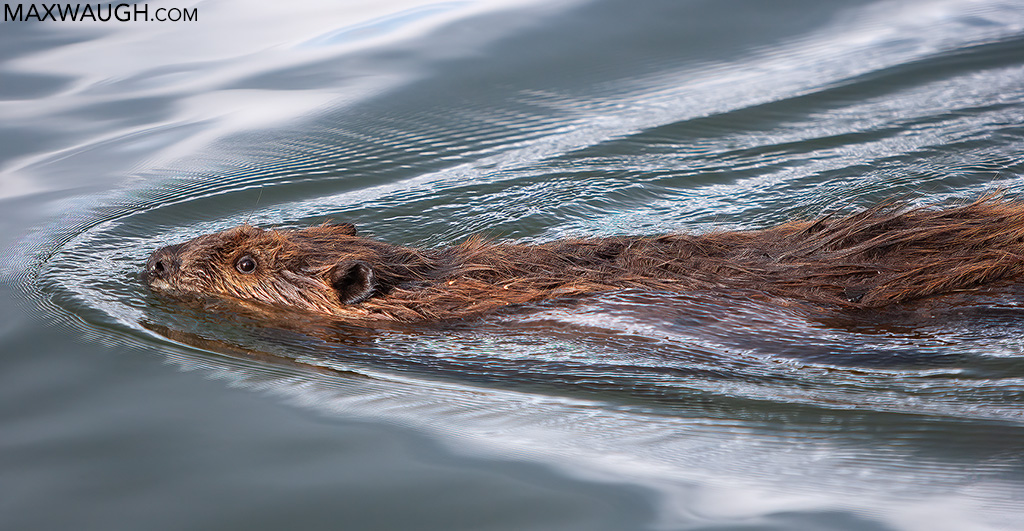 Both of these rodents swim with most of their body length visible. They typically appear very flat along the surface of the water. Again, ignoring the size difference, you can look instead to the length of the body relative to head size. The muskrat’s head and body are relatively compact. But look at the swimming beaver photos above. The beaver’s body extends well beyond the head. This is a large animal (North America’s largest rodent!), so there’s a lot of body trailing in the water. The other thing to look at is the ears. 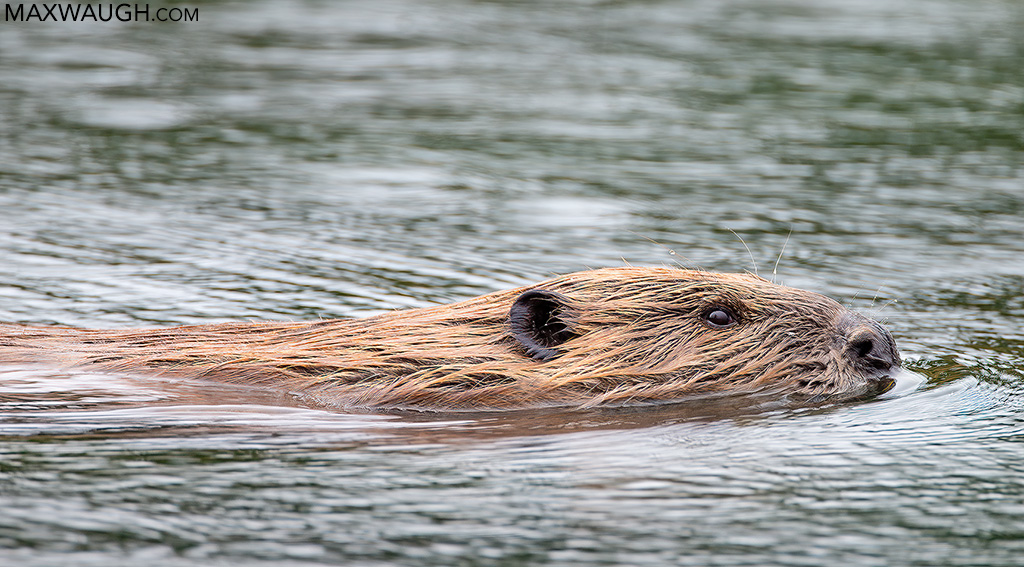 As you can see, the beaver has larger, more prominent ears than the muskrat. The nose is also noticeably larger. 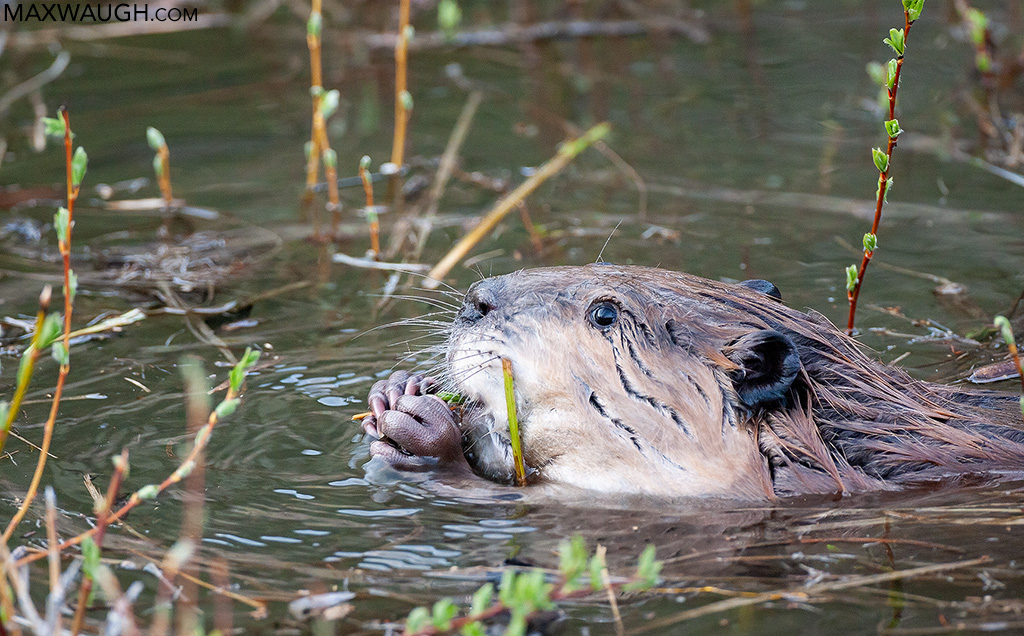 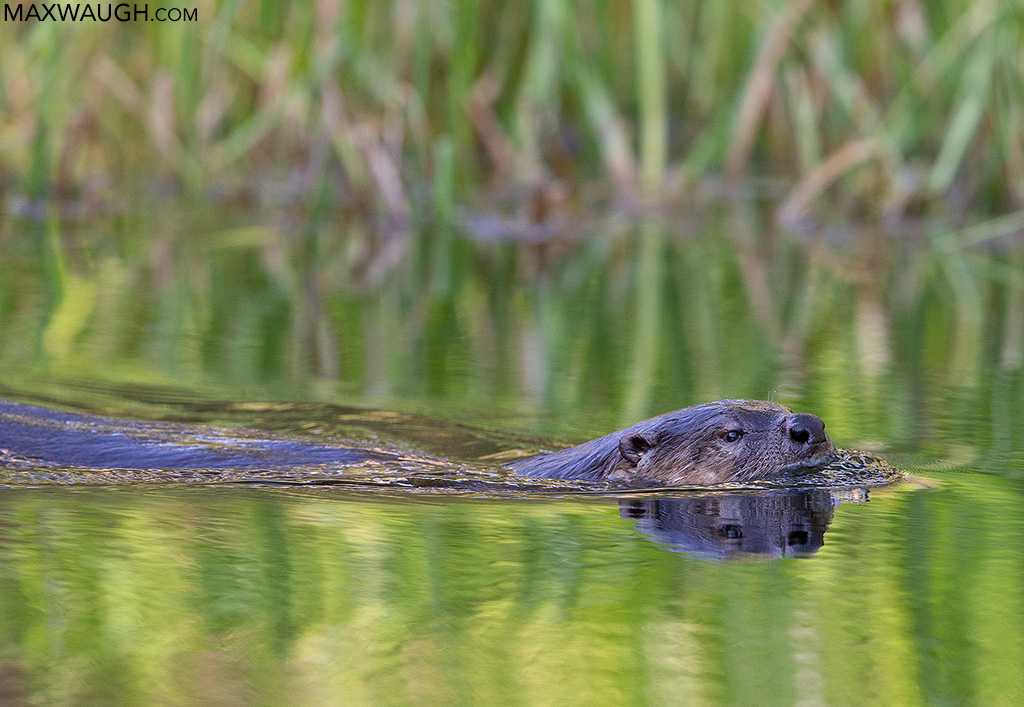 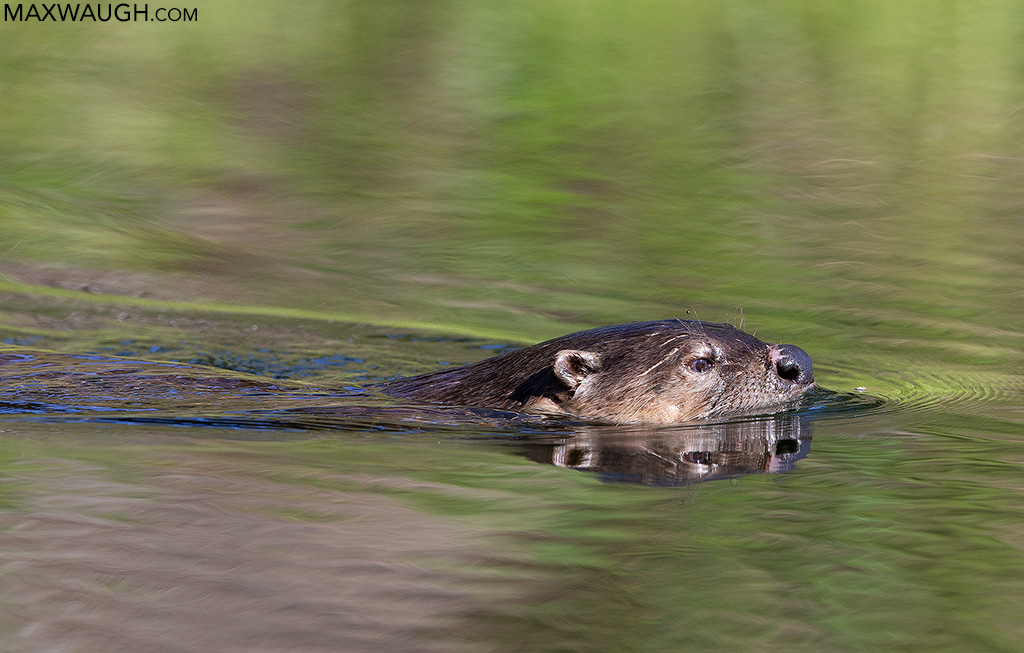 They’ve got those protruding ears like a beaver, but notice how the nose is even bigger relative to their head size?

The main difference is that with swimming river otters, you often just see the head and neck, not the full length of the body. In fact, they are able to raise their head and neck up above the water to “periscope” and investigate their surroundings. 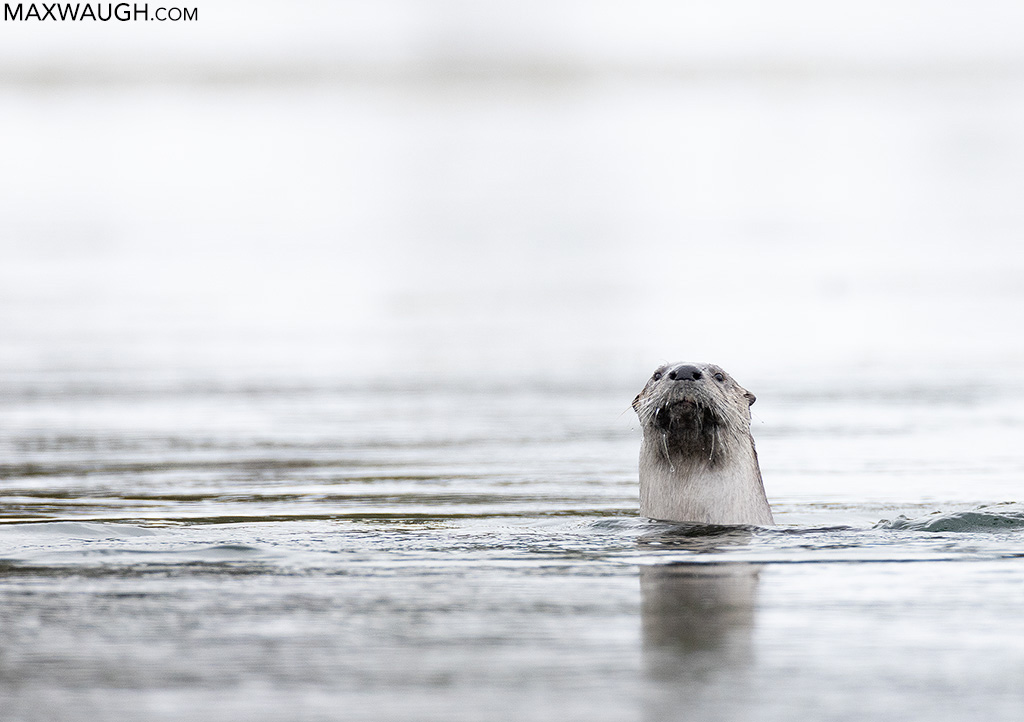 I’ve seen this with neotropical river otters and giant otters as well, not just our North American variety.

Otters have more of a curved form in the water, with most of the body and tail riding just beneath the surface. When they pick up speed they’ll often start “porpoising,” or making shallow dives as they race through the water. You can see the far left otter in the photo below–there are four total–doing just that. Its head is underwater. In the next photo, one otter is just diving under the surface as they speed along. 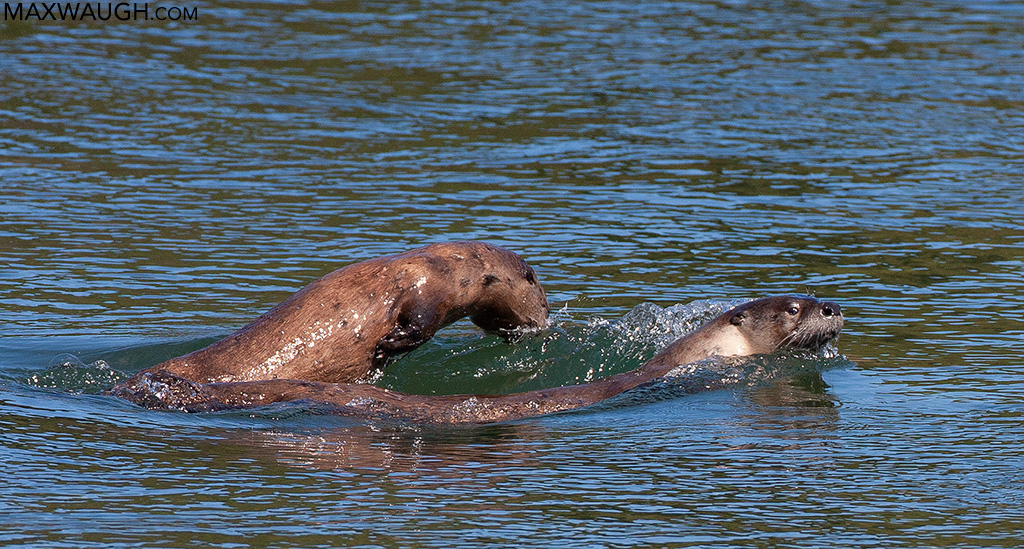 Generally, otters will dive much more frequently and will be much more energetic than the other two, just as they are on land. You’re much more likely to see them traveling in groups, especially in larger rivers and lakes. Though beavers and muskrats will be seen in larger family groups, they’re usually spotted alone or in pairs. 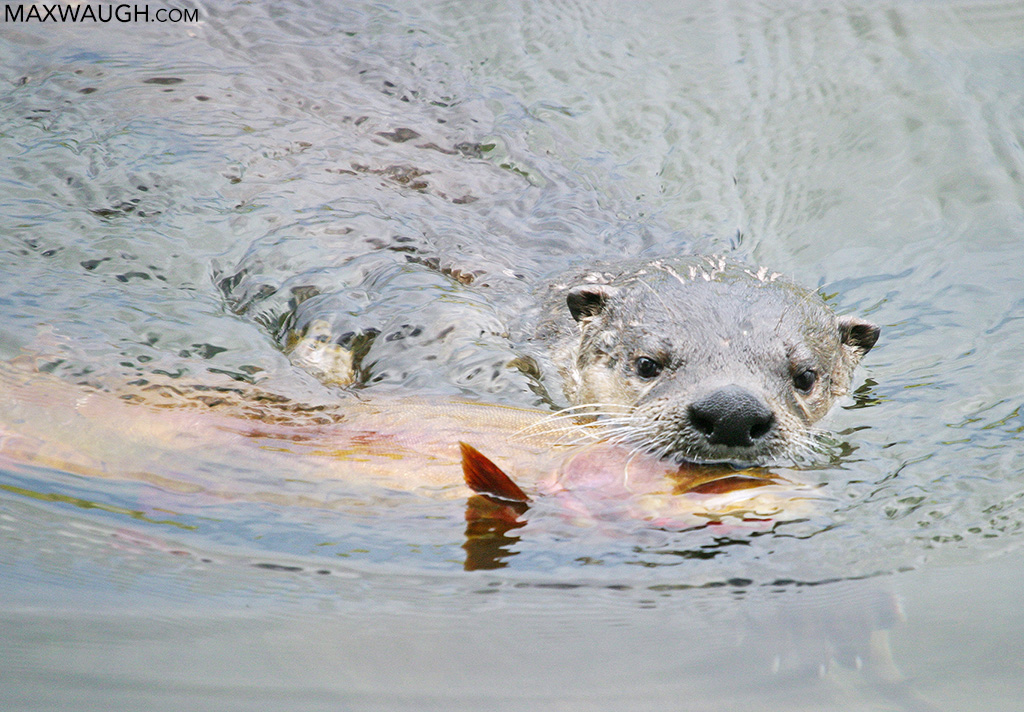 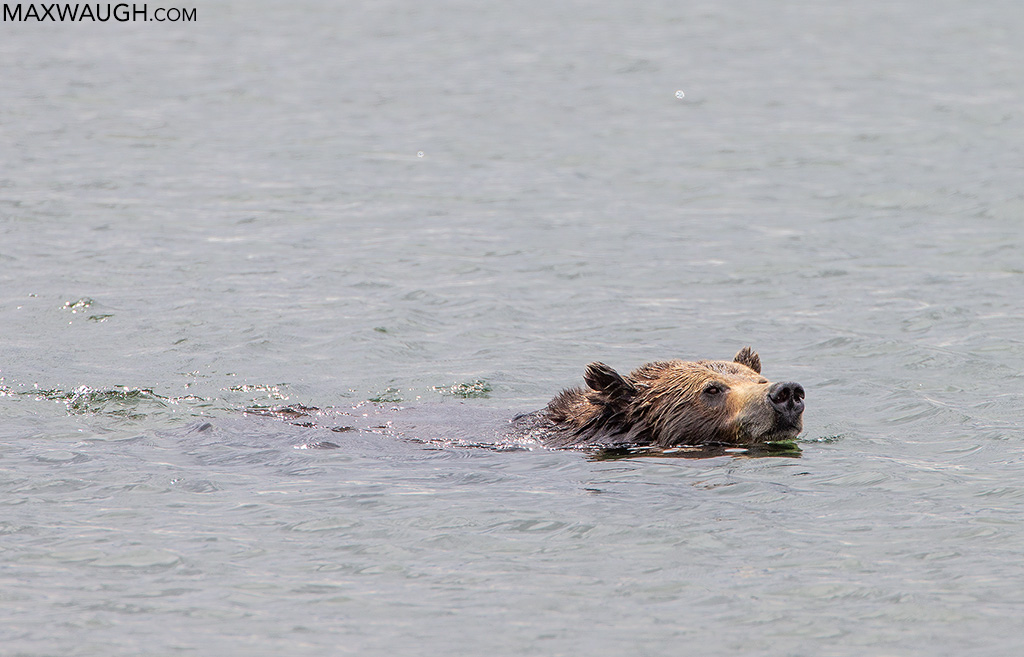 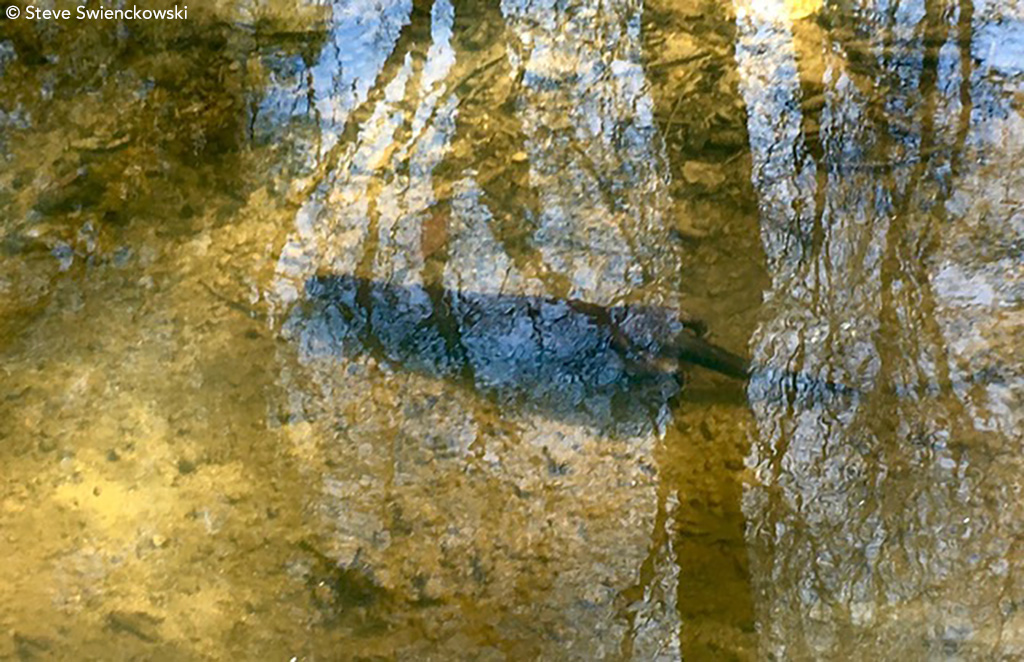 Steve noted that it was larger than a muskrat, but the skinnier tail seen here, as well as stunted head and neck, combined with a thicker back half led me to guess that maybe it’s a… Nutria? It’s an animal that, along with the mink, I never discussed in the original article, but they are invasive in the US and are found in more and more areas (we have them here in the PNW, but I’ve never seen one). For a nutria size comparison, check out this page from the California Department of Fish and Wildlife. The third photo down shows a good lineup with both beaver and muskrat (note, however, that the nutria in that photo has only half a tail).