A couple times over the years I’ve been in Yellowstone on the fourth of July.  This was back in the days before I discovered the wonders of spring in the park.  Since I had that epiphany, summer trips have largely been a thing of the past (with one notable exception).  Still, my early July trips were pretty good.  You had the potential for nice action at Trout Lake, pelicans on the Yellowstone River, some bears were still out and visible, and of course the weather was generally lovely throughout. 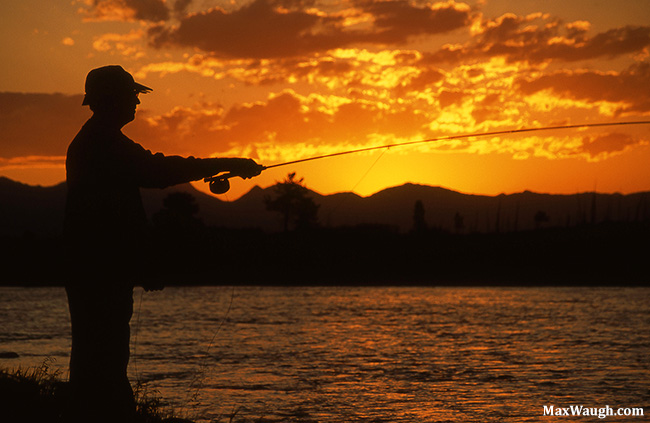 Looking back, both of my Fourths in the park have been memorable for different reasons.  Today I’m thinking about 2003, a trip I made with a couple of good friends and their niece and nephews.  By then I was starting to get my feel for the park and was playing the role of the informal tour guide on the trip.  We’d had a good week, highlighted by black and grizzly bears (my first grizzlies, believe it or not) and a nice hike up Mt. Washburn.  When the Fourth rolled around, we went out for an evening drive following dinner at our Madison camp site.  We traveled west along the Madison River and timed things just right to soak in a glorious sunset.

Near one of the pullouts, I noticed an elderly gentleman fishing against the wonderous gold and orange backdrop.  I asked him if I could snap some photos as he continued to cast away.

Mind you, this was back when I was still shooting film.  My transition to digital was still a couple years away, so I had to fire away, trying all sorts of different compositions while hoping the exposure was spot on.  I shot an entire roll, and thankfully most of the shots turned out pretty well.

During the brief shoot, a number of cars pulled over and we heard the most popular question in Yellowstone: “What do ya see?!”  I gestured toward the beautiful horizon time and again, and every time, the cars couldn’t escape quickly enough.  Yes, there were even screeching tires.  They should have stayed.  I doubt the miniscule opportunity to see a bear in the rapidly-fading light of that day would’ve beaten the view we had at that moment.  It’s one I still remember a dozen years later.

I hope everyone has a happy and safe Fourth today!