I’ve finally added my first Yellowstone images to the photo archive.  I’ve uploaded two separate galleries of photos from the summer of 2013.  This was a special trip back to the park–I normally don’t visit in summer any more–scheduled specifically to tackle several photographic goals.  In a way, it’s my first trip to the park shooting “on assignment.”

Chief among these goals was to participate in my first aerial shoot over Yellowstone.  No, drones weren’t involved.  I chartered a plane (at no small expense) for a couple hours.  This was a great opportunity to see the park from a new perspective and also to visit some areas that I’d never had a chance to see from the ground.  I scheduled the flight to start later in the morning, since I wanted to have warmer temperatures by the time I hit the thermal basins in the southwest.  You’ll see why below.

Flying from Bozeman, we first hit the northern range, including Roosevelt Arch, Blacktail Plateau, and of course, the Lamar Valley. 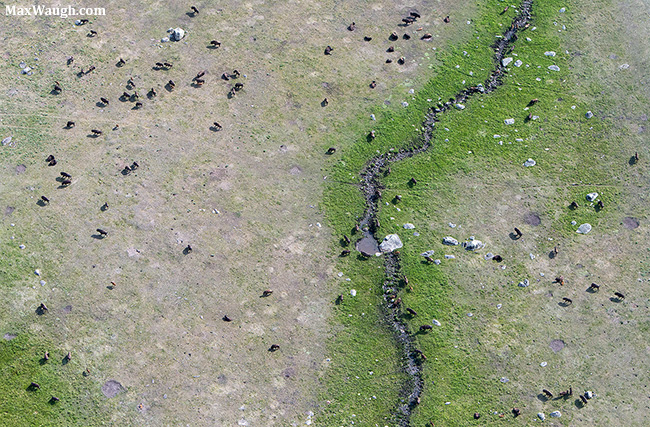 There were loads of bison in the valley, and it was fun to photograph them from a distance where they looked more like ants.  This wasn’t really a wildlife shoot, but this was an opportunity to look at the animals in a whole new way.

From the Lamar, we went up over Cache Creek a ways before cutting south and flying over the Grand Canyon of the Yellowstone. 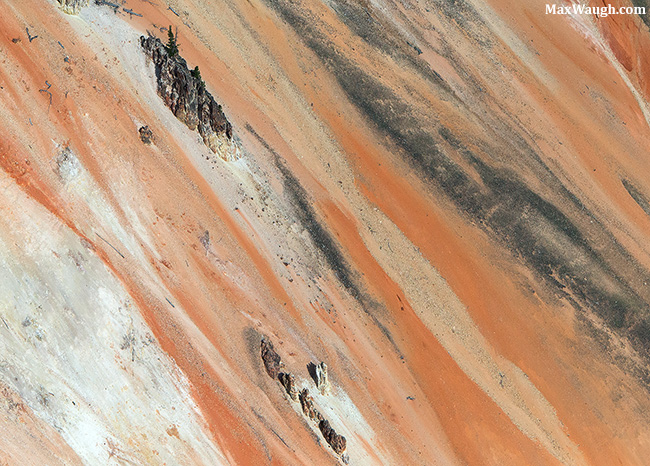 From there, we soared over Hayden Valley and Alum Creek before hitting another new spot for me: Pelican Valley.  This is a destination only accessed on the ground in mid-summer and early fall, and due to the intense grizzly activity back there it’s a place best visited in a group.  So this was my first visit to the valley.  We did spot one grizzly bear facing off with a couple of mule deer.  More interesting to me were the patterns on the valley floor.  The remnants of the snow melt could be seen, where temporary steams and waterways were still drying out. 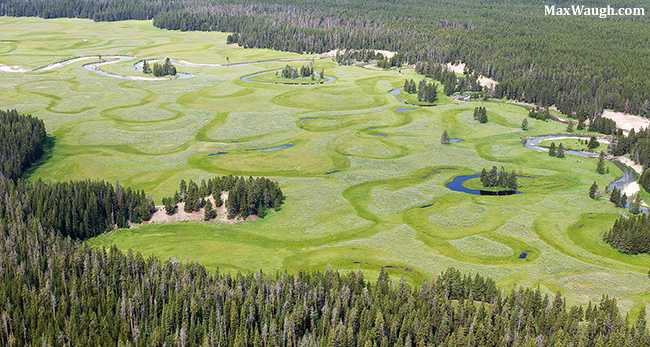 Of course, the main reason for the flight was to view the geyser basins from overhead.  Midway Geyser Basin, actually, was the only one I really cared about.  I wanted to finally photograph Grand Prismatic Spring from the best angle possible.  I had scheduled the flight a bit later in the morning so that we’d arrive when it was much warmer, thus reducing the amount of steam coming off the spring and exposing even more of the fantastic colors.  Our timing (and the weather) worked out perfectly. 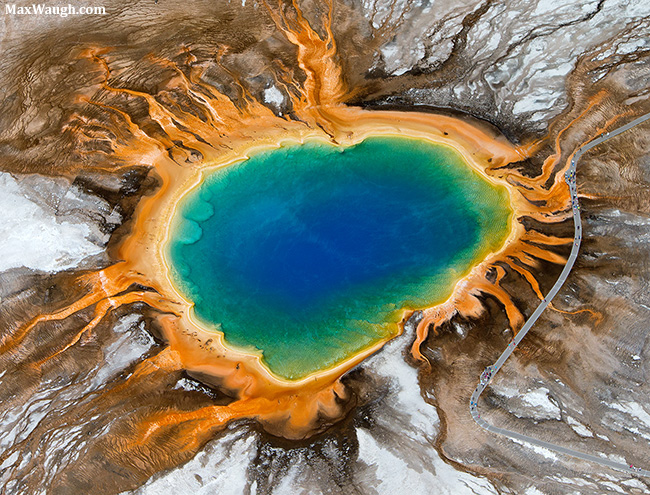 I was able to capture several shots of Grand Prismatic as we circled for just a couple minutes.  Shooting with a medium range zoom and a polarizer attached, I could photograph the spring both wide and in close-up detail from different angles.  It made the whole venture worthwhile.

View the full gallery of my aerial shoot of Yellowstone here.

The flight over the park wasn’t my only reason for coming out.  I had some wildlife goals as well.

During my prior visit in May and early June, I was fortunate to spend time photographing a great gray owl nest.  It was my first great gray nest, and I wanted to return in the summer to check on the progress of the owlets.  When I arrived, the nest was empty, but it didn’t take long to find the chicks, which had already fledged and were exploring nearby trees in the area.  This also meant that at least one of the adults was still around and still providing food for the youngsters. 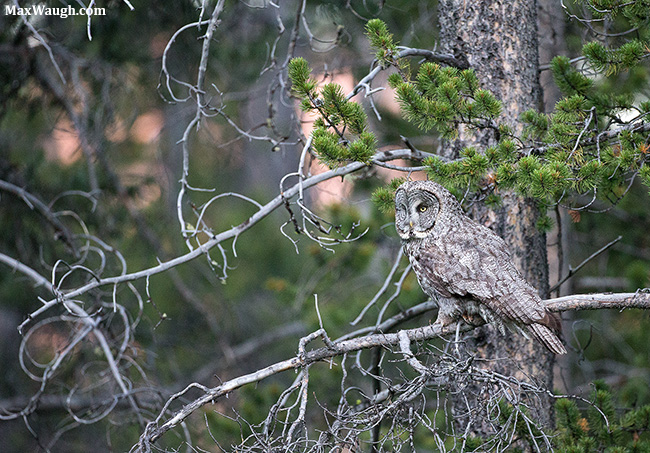 I had a few opportunities to photograph the adult in action.  One evening session was particularly fruitful as it soared over the meadow to hunt. 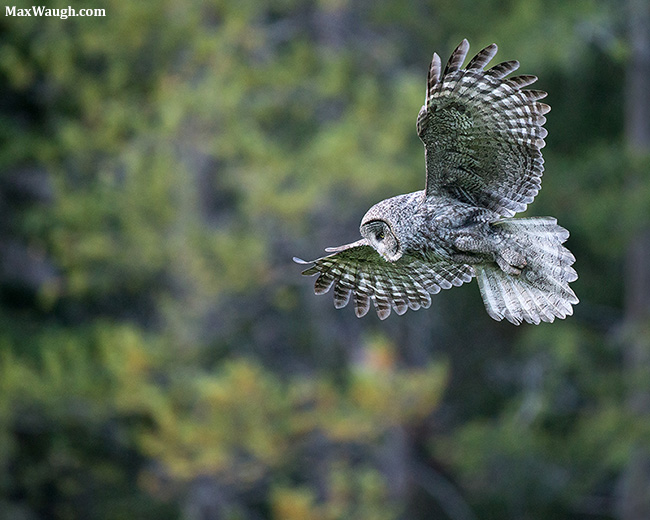 Aside from owls, my other main wildlife goal waited for me at Trout Lake.  It had been several years since I’d photographed otter pups.  They typically come out at Trout Lake starting in mid-June, so I’d just missed them the previous couple years.  This time, I had received reports of three pups at the lake, so I knew I’d have to make the hike up.  Unfortunately, in the week prior to my arrival, two of the pups died.  So my odds were a bit slimmer, but there was still a chance to see one. 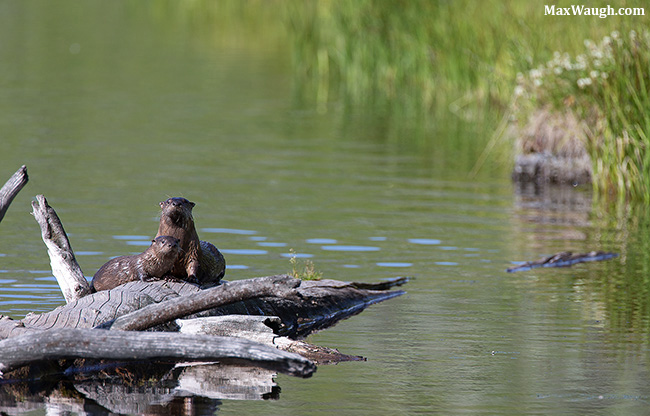 Luck was with me, as we were fortunate to catch mother and pup out on what I believe was their last day at the lake.  They eventually disappeared over the waterfall and headed down toward the Lamar Valley.  I don’t believe they were seen at Trout Lake again after that. 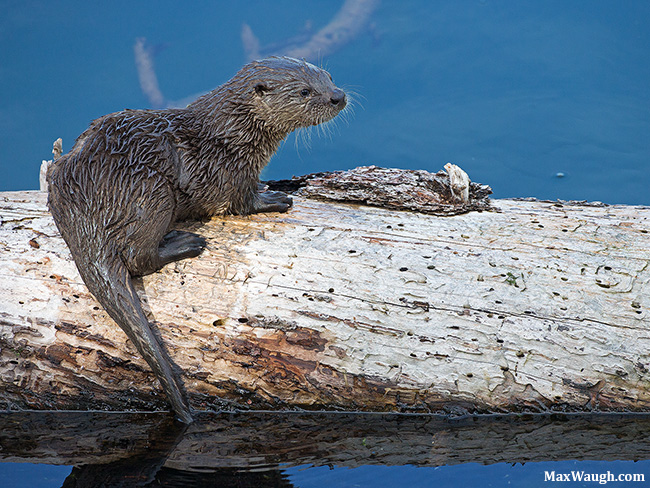 So, all my goals were accomplished, but I did have one bonus encounter during the trip: mountain goats on the Beartooth Pass! 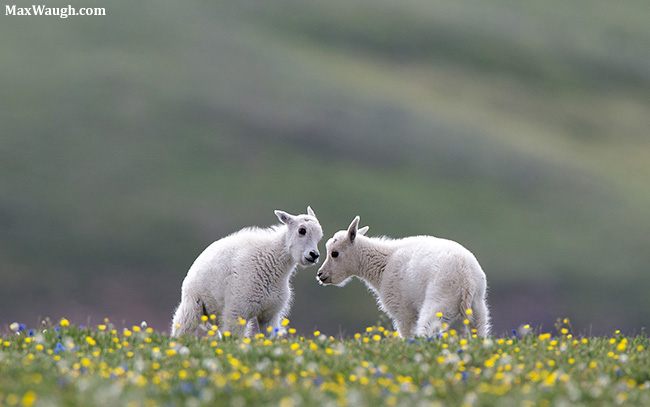 While it was far from a great shoot, and the adults were a looking a bit ragged while shedding their summer coats, it was still my best goat shoot to date.

To see the full gallery of owl, otter and goat images from this trip, please visit the photo archive.

And remember, you can now order prints of any of the photos in the archive!