The King is Dead. Long Live the King. 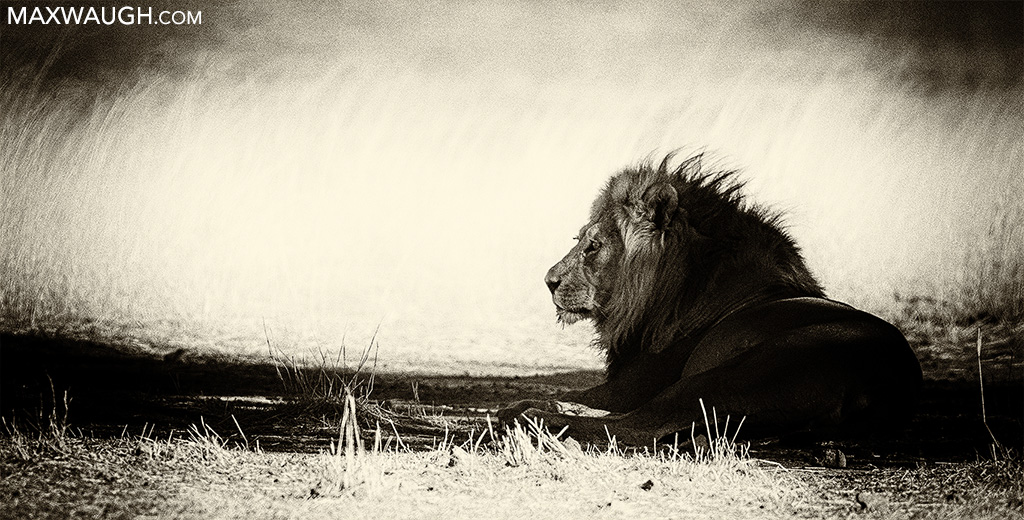 In southern Africa, a foreign national arrived from the north to hunt big game.  He hired a local guide to help him track and kill the greatest of trophies, a male lion.  The hunter, an arrogant man, liked to boast about his past kills and daydreamed of taking down the King of Beasts.  He and his tracker pursued their quarry on foot in a private game concession, where such hunts are legal.  They spent long days following tracks, studying scat and scanning the horizon and listening for clues as to the whereabouts of the great lion.

Near the end of the third day, they stumbled upon the cat.  It wasn’t happy to see them, but for a brief moment it was out in the open, at close range.  The guide urged the tracker to hurry, ready his weapon and shoot before the moment was lost.  The hunter, so confident in the previous days, lost composure.  Fumbling with his gear, with hands shaking, he missed his opportunity to land the killing shot.  The lion fled into the bush.

So the hunt dragged on.  As the foreigner’s week in Africa neared its end, he was still waiting for a chance at redemption.  At last, on the final day, they found the lion again.  This time it did not flee, so the hunter was able to take his time and prepare the final shot.  With a steady hand and singular focus, he raised his rifle, sighted the lion through the scope and… handed the gun back to his guide.  Then he walked away.

This story was told to me by a tour operator in South Africa last year.  In a past life, he worked as a tracker for big game hunters and concessionaires (he was the guide in the story) before turning his focus to conservation and guiding for wildlife watchers instead.  Earlier this month, a similar tale unfolded in Zimbabwe, but the ending was quite different.

If you don’t know about Cecil the Lion is at this point… well, that means you haven’t discovered the Internet and you wouldn’t be reading this blog.  Cecil, a male lion with territory in Zimbabwe’s Hwange National Park, was shot and killed (on the second attempt, with a rifle, following a botched shot with a bow and arrow) under suspicious circumstances that may have involved baiting, poaching and the illegal removal of the lion’s radio collar, used by researchers to track his movements.

Though the manner of Cecil’s death is upsetting, the aftermath is the real story.  Outrage has spread like wildfire across the Internet.  News got out that the lion was likely lured out of the national park and poached, and once the hunter’s identity was subsequently revealed, the torches and pitchforks were quickly at his door.  Within hours of news spreading, his business shut down (possibly for good), his phone and Facebook pages were offline and threats of torture and death were being lobbed his way from around the world.

But enough about that clown.  The collective consequences of his actions will ultimately far outweigh his crimes.  He certainly doesn’t deserve more of our time or attention.

And I guess that’s the problem I have with how this whole thing has played out.

The sheer amount of vitriol and outrage directed toward this man is shocking to me, mainly because so much of the energy behind all the anger is being misdirected.   Sport hunting of predators at the top of the food chain makes little sense to me, particularly when they play such an important role in ecosystems we’ve already managed to abuse and destroy.  Poaching is inexcusable.  But is a prolonged and sensationalized campaign of hate toward one lowly individual going to overcome these issues?

Unfortunately, rather than focusing on the bigger issues at hand and using their concerns as motivation to work toward positive outcomes, people would rather occupy their time attempting to destroy the life of one man.  Jimmy Kimmel, of all people, had one of the more reasonable responses to this mess, by asking people to channel their emotions and energy into donations for the research group studying Cecil and Hwange’s lions.

Cecil’s unnecessary killing is sad when taking into account the enjoyment he brought park visitors and the void he leaves in the pride structure of Hwange’s lions, but it’s also pretty insignificant compared to the human rights and corruption issues instigated by the political regime in Cecil’s native country, and pales in comparison to what the Chinese are currently doing to Africa’s wildlife across much of the continent.  Where’s the mass outrage and action in response to this, or this or this?  You’d expect when a Saudi prince goes out and kills off 2% of an entire species on a recreational hunting trip, there might be a little more noise than that which resulted from the poaching of a single lion, but that story, like so many others of its kind, was largely ignored.  I suppose a civilian from Minnesota is an easy target, a convenient receptacle for righteous indignation that will ultimately affect very little change in the world.  Recalling a certain play I once performed in high school, most of this backlash involves sound and fury, but may ultimately have very little significance.

In death, Cecil inadvertently became the most famous lion that ever lived.  If only his passing could inspire the masses to expend just a little of that pent-up emotion on other, more widespread pressing issues and more positive change.

Then, perhaps, Cecil will have a lasting legacy.  Long live the King.