When Sports Nearly Killed Off My Love of Sports

We evolve throughout our lives.  I’ve always believed that a life can be broken down into different periods, eras, etc. that are shaped significantly by major factors or changes.  We change careers, we begin and end relationships, we move, we have children, and we develop new hobbies and interests.  How significantly these changes can affect the direction of our lives varies, but inevitably we can all probably identify those transitional moments over the course of the decades we’ve lived.  When we morphed into “Athlete” or “Businesswoman” or “Father” or “New Yorker.”  We’re defined by our relationships, our geography and environment, and our activities to some extent.

Under a microscope, we could probably spot more subtle changes within these particular aspects of our lives, changes often caused by some of the other elements that make up our persona.  Our interests and activities can easily evolve based on career choices, moving to new hometowns, or fluctuating relationships.  Partners take up their significant others’ hobbies, moving to a new city ends participation in a local sports rec. league, and a new job or family obligation cuts down on one’s travels.

With football season upon us, it’s a good time for me to talk a bit about my evolution as a sports fan. 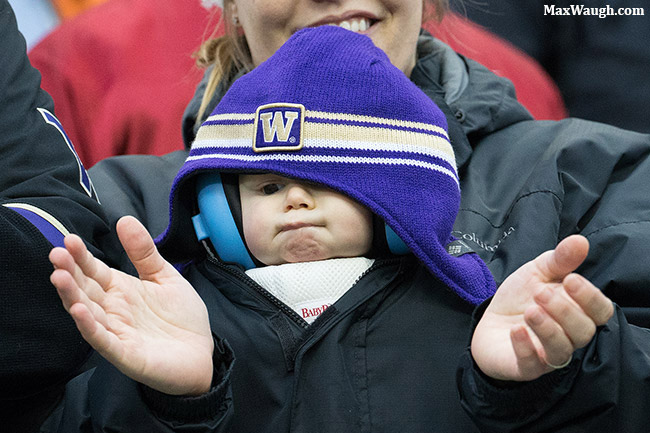 For most of my life I was no different than any other red-blooded American male when it came to sports.  I grew up playing little league and neighborhood sports, I knew my sports trivia (ranking #1 nationally in an online sports trivia game back in my college days was oh, so important at the time), and I rooted for my local teams passionately.  Sometimes, I took this to extremes.  Starting with my time at the University of Washington, I attended 73 consecutive football games–home and away–which was probably a record for a poor student fan at the time.  I’d go so far as to borrow money from friends when I couldn’t afford a plane ticket, just so I could keep the streak going and support my Huskies in person.

But that streak ended when I found myself watching the 2001 Holiday Bowl from home with friends.  It was one heck of a game, and I actually enjoyed the detached experience, realizing that I didn’t really miss being there.  It was okay to dial back the sports obsession just a bit.

Within a year or two, I stopped traveling to away games altogether and even missed the occasional Husky home game, something I used to think was blasphemous (I once skipped a good friend’s wedding in favor of attending a football game… something I still feel guilty about to this day).  Why?  Because I discovered a new love: international travel.  I no longer cared if I wasn’t on hand to see another dismal performance–the Dawgs were terrible in those days–because I was enjoying something much more enriching.  Exploring new parts of this world and developing my passion for photography at the same time… not to mention sharing the experience with the woman whom I’d later marry.  All that seemed worthwhile compared to a three hour sporting event. 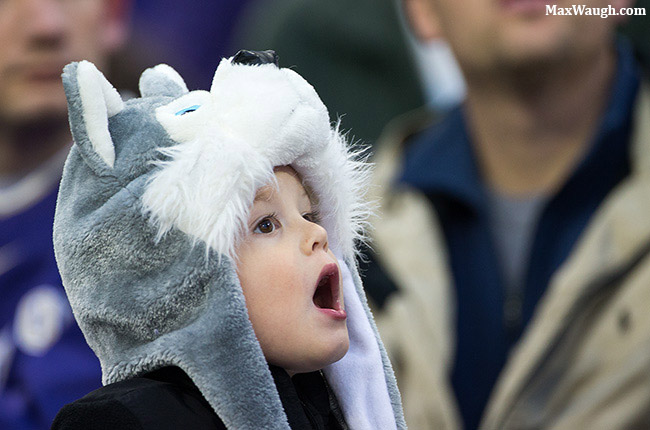 Life was changing, and I was growing out of the Hard Core Sports Fanatic phase as other priorities took hold.  That said, I still loved sports in general and especially my Huskies.

Around this time my photography career had advanced to the point where I was hired to be the chief photographer for UW Athletics.  It was a great way for me to combine two of my passions: the ability to “share the experience” with people via my photography (something that still motivates me to this day) and my lifelong love for Seattle sports.

I was no longer just a fan.  I had a responsibility to tell a story, and to give my fellow supporters the best look possible at what they may have missed on the field… or perhaps to just give them an opportunity to replay and relive some great memories from game day one more time. 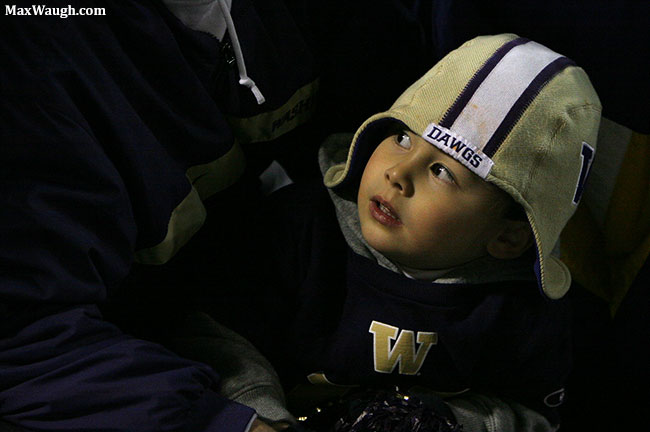 My more serious role in the arena or stadium had tempered my sports passion by necessity, but it was also becoming apparent that my laid-back personality was helping me remove myself from the intense fan experience.  Fast forward to today and I’m admittedly well beyond the Sports Fanatic part of my life.  Wildlife, photography and adventure are all more important.  My love of sport has diminished in the years since college, but two events in the past year nearly killed it altogether.

I’ve been a Washington Husky all of my life.  I’ve enjoyed the championships, and I’ve endured the dark times.  And there have been a lot of the latter, especially from the time I first attended the university all the way through my tenure as UW photographer.  But I’ve been pretty good about dealing with probation, losses and terrible coaches along the way.  Apparently what I couldn’t handle was the deterioration of certain traditions tied to Husky Football. 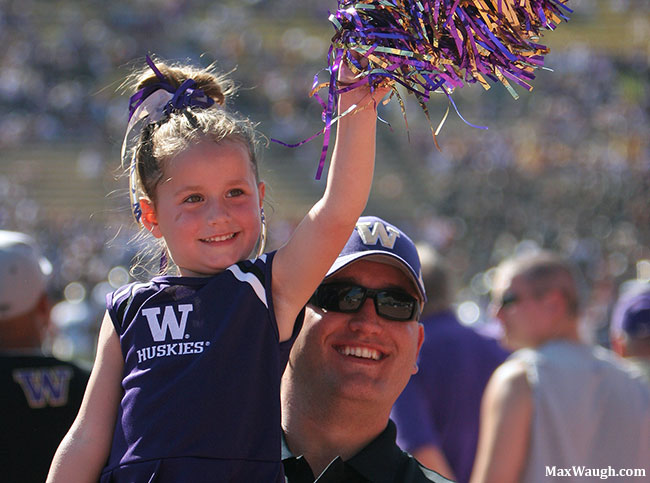 Last fall, something snapped.  And I wrote a letter to the athletic department.  At first, it was somewhat private.  I shared it with friends on Facebook whom I knew might empathize.  Soon people were encouraging me to take it public in order to get more support before submitting it.  We rounded up over 400 signatures from fellow alumni, current students, and former athletes before dropping the letter off on campus.  Then it hit the Seattle Times and got a huge response.

This put me in a weird, unfamiliar place.  I’m not a Letter Writer.  I don’t take up random causes to vent and express outrage and Fight For Change each week.  But the crass commercialization and erosion of our beloved sports traditions at my alma mater–traditions that make the university sports experience truly unique–finally motivated me to take action. 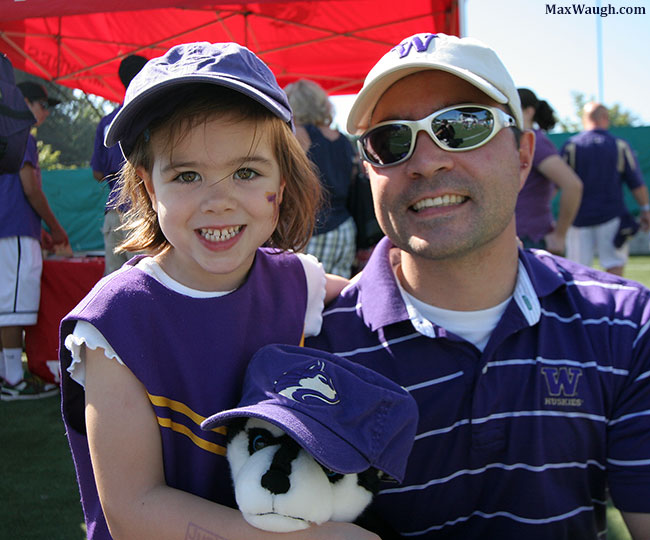 I was asked to do more.  A local station wanted to put me on TV.  Long-time alumni were trying to enlist me in campaigns to get people fired.  That was too much.  I could already see that The Letter made a difference for the better.  Someone took notice and positive changes were taking place by the next game.  So in a way, I accomplished my modest goal.  But it didn’t make me feel any better as a fan.  And I started to question how much energy I wanted to continue to devote to my extended Husky family.

It’s been mentioned before: I like to think of myself as very laid back and even-keeled, with a preference to look at things logically before reacting in passionate outbursts.  Maybe this is why I had such a problem with the Cecil Outrage.  And let’s face it, Stoicism isn’t exactly the calling card of a sports fanatic.

Jenn, my wife, doesn’t mask her passion.  Our basketball team may fall behind 0-2 at the start of a game and she’s already bristling.  Meanwhile, I’m typically sitting back and accepting the hits with equanimity.  I don’t waste time ranting and raving on message boards after losses, something that makes a lot of people look silly and is generally a waste of energy.  However, this doesn’t mean I’ve stopped supporting my teams, and I definitely enjoy the wins as much as ever. 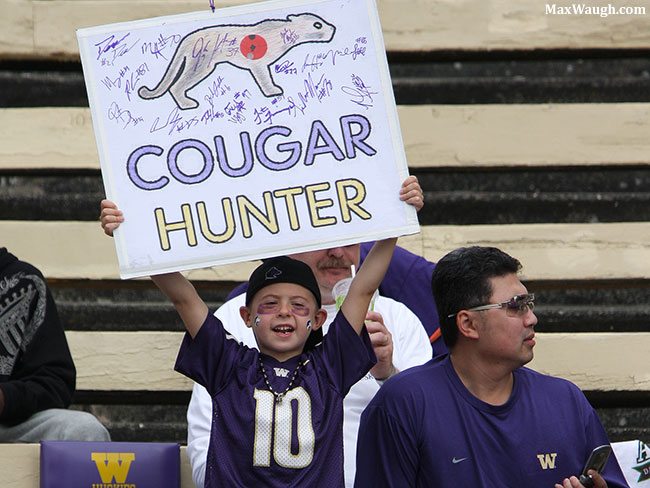 This February, Super Bowl XLIX put me in a different place mentally than I have ever been before as a sports fan.  I still struggle to even talk about what happened to the Seahawks, and don’t even like writing about it here.  If you aren’t familiar with what occurred, I’m not even going to help enlighten you.  Go find out for yourself, because I’d rather not relive it.

All this hand-wringing over a game, the cringeworthy memories of that awful result and the unmatched stress of that day are all so foreign to me.  I have never felt that emotional or distraught during the final moments and in the aftermath of a sporting event.  In retrospect, I believe the fan in me wanted so badly for the Hawks to achieve greatness–cementing themselves as an all-time legendary team with back-to-back championships–that not seeing them achieve that goal was devastating.  Particularly when greatness was so close…

Following the game, I immediately distanced myself from sports in general.  I avoided sports sites on the Internet, I refused to tune into sports talk radio and I kept the TV off.  I was also very lucky that I had a month-long trip to India scheduled starting the week after the game.  It helped me distance myself from anything related to what happened.  When I returned in March I still refused to think or talk about it.  To this day Jenn, the one who flips out over insignificant losses, thinks I’m overreacting.  And she’s probably right.

Ironically, the emotions from the Super Bowl that pushed me further away from sports had also transformed me–in the moments, days and weeks following the game–into more of a true, die-hard sports fan than ever before.  Perhaps the excessive level of angst I’ve been feeling while trying to get over that game means I’ve finally reached the pinnacle of fandom. 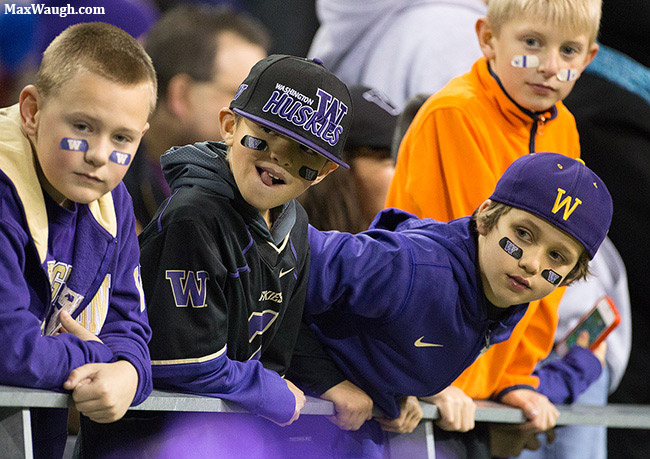 Honestly though, I’m having a hard time buying into that, especially when I find myself largely apathetic about the sports landscape.  Sports radio and ESPN are less important, even a full six months following the XLIX debacle.  Husky football starts back up on Friday, a fact I kept forgetting until my new media credentials for Husky Football arrived.

This answered one outstanding question, since I wasn’t sure whether authoring The Letter would get me banned from the sidelines.  At times during the offseason I found myself not caring about whether I’d be able to return.  But I maintain a good working relationship with and greatly respect the people in UW Athletic Communications… and of course, I still love my university.  So the responsibility I feel about providing game coverage to the fan base remains, and I expect to share game day galleries throughout much of the season right here on the blog. 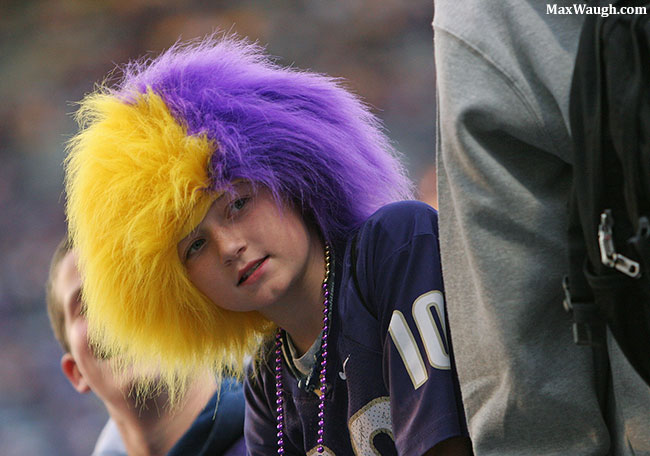 But the future is uncertain.  I’m going into my 22nd year working with or for UW Athletics in some capacity, and my 16th season covering football games from the sidelines.  It’s quite possible this era of my life is ending.  If that comes to pass, I’m comfortable knowing that other interests, hobbies and responsibilities will fill the void.

My personal evolution and life will continue, and for now, sports thankfully remain a part of it.