With my 2015 Fall Yellowstone and Grand Teton photo tour just around the corner, I’m looking back at my last visit to the park, which occurred in May and June.  I’m counting down my top ten wildlife encounters of the spring.  If you missed #10-7 on the list, take a look here.

On Monday I mentioned the red fox den that my clients and I were lucky to visit.  Unfortunately, the park service had to close that area down due to safety concerns, so my final tour group missed out on the opportunity to see it.  But we found a surprise substitute: a coyote den! 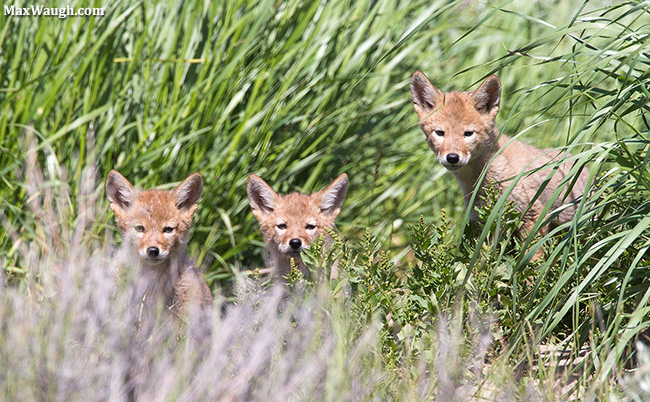 It had been several years since I’d seen and photographed an active coyote den in the park.  Even though we only saw the pups one time, it was a lot of fun spending some time with them as they explored the grassy area around the den site.

I’ve had bad luck with the wild horses east of Yellowstone.  And though I had planned another trip out there later in June, I wasn’t confident that it would go well.  Frequent thunderstorms made the threat of muddy conditions in the McCullough Peaks range a real possibility.  Those who have followed my trip reports for a while may recall my first visit to this area in 2011, when I got our car stuck in the mud… and then the tow truck that came to rescue us got stuck as well!

So it was with some trepidation that I returned to seek out the wild horse bands.  Luckily, conditions were pretty dry overall.  Armed with some tips from fellow photographer (and wild horse enthusiast) Sandy Sisti, we were able to track down the main part of the herd pretty quickly.  Over the course of an afternoon and the following morning, we watched and photographed as many as ninety of these beautiful animals.  Previously I’d seen no more than ten! 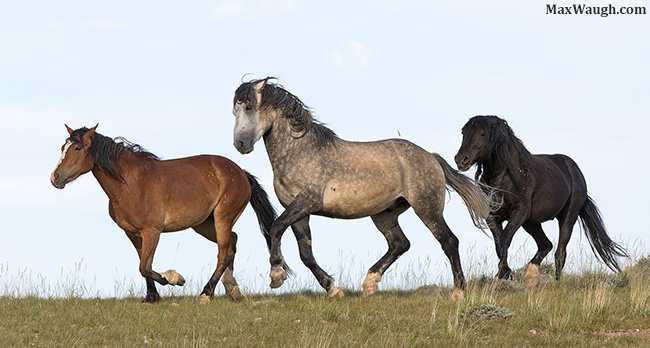 Wild horses exude a certain feeling… raw, untamed power is a good way to describe it.  The stallions are pretty ornery (due in part to their frustration at not being able to produce more foals with the sterilized mares in the herd), and fights break out fairly often.

It’s this type of action that you really hope to witness and capture as a photographer, and it’s surprisingly challenging to do so.  In our case, there were so many horses that the fights we did witness were usually obscured, or muddled by other herd members in front of or behind the combatants.  It was extremely difficult to capture “clean shots.” 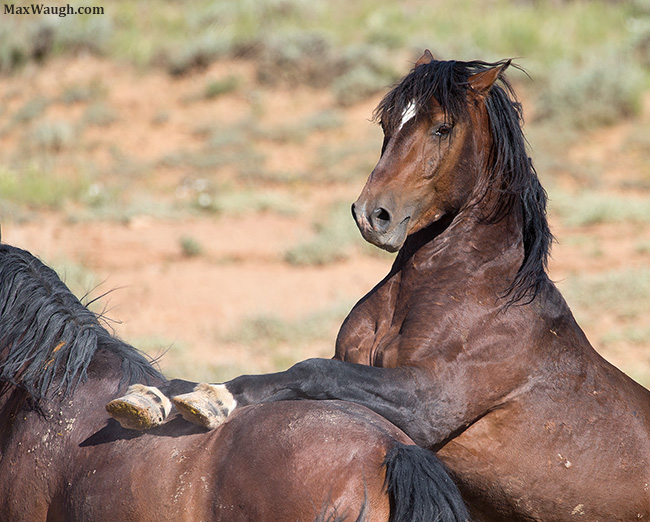 Still, after a few long waits, we did witness a few tussles and came away with some nice photos of these handsome animals.  As a bonus, I avoided getting stuck!

I promised on Monday that you hadn’t seen the last of the owls on this list.  In addition to my northern pygmy and long-eared owl sightings, I was fortunate to see great horned owls.  A lot of great horned owls. 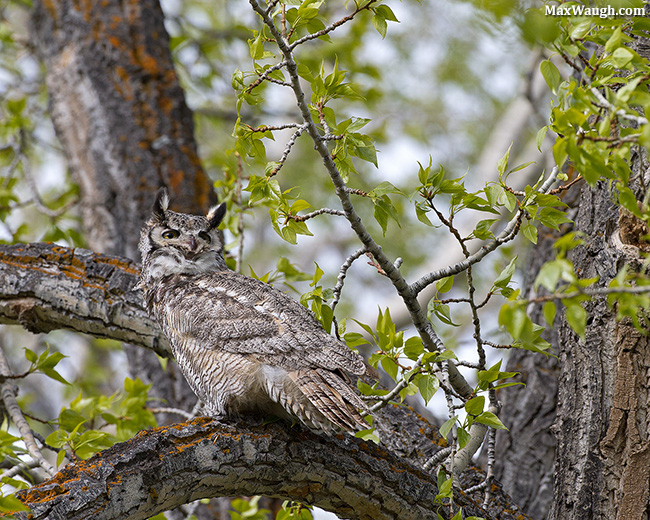 There’s one extremely reliable spot in the park which produces great horned owl sightings nearly every spring.  This year was no exception, as I was able to photograph adults and owlets there.  But it was all the other encounters that surprised me.

I saw great horned owls in at least four other new locations, including two active nest sites.  As I mentioned in my last post, seeing a species for the first time in a new place gets me excited.  A few of these spots may be active again in the future, so they’ll potentially present opportunities to take more photos and to share sightings with guests and friends who may enjoy seeing owls.

Some of the sightings were accidental, in a way.  In one case, I was searching for a pygmy owl when I heard the call of the great horned in the woods.  In another instance, we spied an owl perched near the road as we drove south through the park before dawn.  The nests were found with some help.  A report on the internet described a nest up on the Beartooth Pass, which we eventually managed to track down.

The best site, however, was found by one of my eagle-eyed clients.  Sheila was part of my first spring tour group when she spotted an adult great horned owl blending in with the burned tree trunks off the Lake Butte Overlook Drive.  This was a really cool environment, different from the usual green pine forest where I see these owls.  And the sighting paid off later.  Because we saw the owl a few more times in the same area, I suspected there may be a nest there.  Sure enough, one morning when I arrived with my next group we saw a couple of owlets perched out in the open. 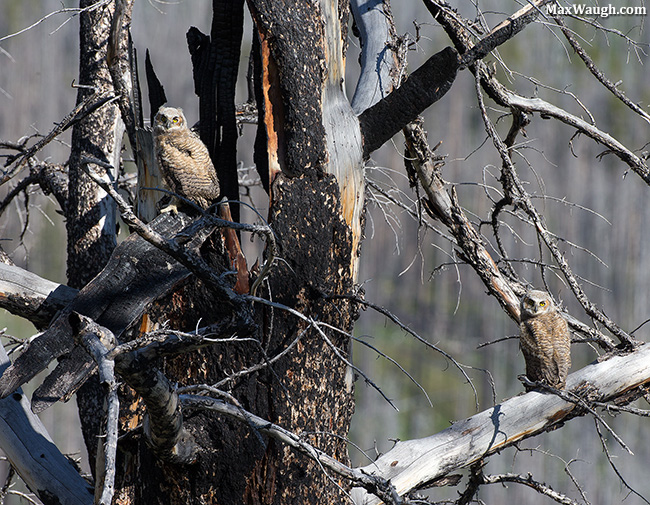 One morning we arrived at Pelican Creek to find a large mob watching Blaze (#9 on this list) and her cubs.  Blaze had found a newborn elk calf and was making quick work of her meal.  We eventually left the scene and headed east toward Mary Bay, where we found another grizzly.  This time is was Circus Bear (can you tell the bear stalkers like to nickname the Lake bears?), a grizzly I had never actually seen before.

While we waited to see if Circus Bear would get closer, friends arrived and mentioned that he had been out swimming in the lake earlier in the week.  A swimming bear is an uncommon sight in Yellowstone (compared to Alaska or Canada, where they often splash around for fish or swim between coastal islands), and we all wished we had been there to see Circus Bear in the water.

In this instance he decided not to swim, and instead wandered back away from the road toward the trees.  We parted ways with our friends.  They turned back west, while we continued east.  A minute later at the far end of the bay we found a swimming grizzly bear. 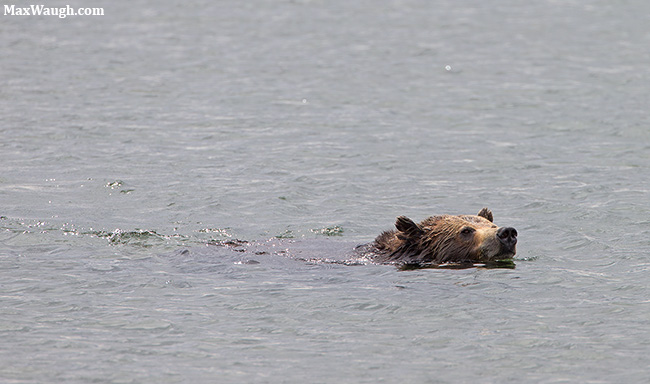 That was a fun coincidence, given our recent discussion, but it was also a very cool encounter.  It was only my second swimming grizz, and this one came right toward us.  We were able to shoot from the car as he emerged onto shore, shook off the lake water and crossed the road before heading toward the far hill. 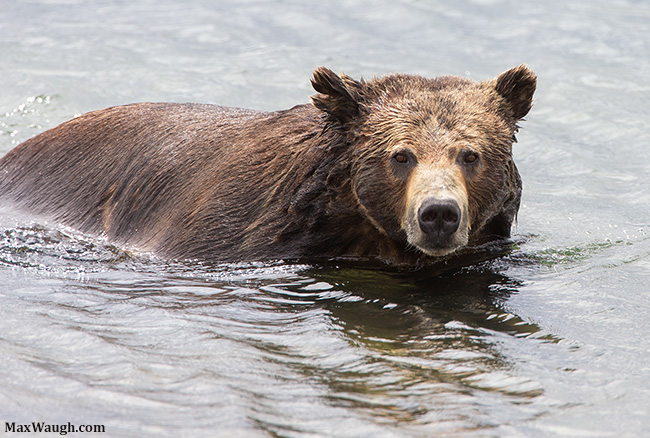 Check back on Friday as I finish the countdown with my top two encounters of the spring.  Can you guess what they are?  And remember, you can view all of my spring 2015 Yellowstone photos (and order prints of any of them) in the following galleries: