It’s time for the first home game of the football season here at Husky Stadium.  What a gorgeous day to open the home schedule, as the Dawgs looked to bounce back from their opening loss with a win against the Sacramento State Hornets.  The Huskies prevailed 49-0.

Before we get to the photos, I’d like to give a quick shout out to all of the winning bidders who picked up some of my donated photo prints and other items at two different auctions that raised scholarship money for the Husky Marching Band.  My donated items raised $1650.  Thanks again to all of the winners!

So, this was my first time shooting sports in a while, probably since last football season.  As always, the first football game back is a mix of good (visiting with peers and friends I haven’t seen since last season), bad (forgetting which gear I actually use to shoot sports… I was busy mixing up camera straps this morning) and ugly (how my body feels after kneeling on the sidelines for three hours).  Ultimately, sharing the experience with my fellow Huskies makes it all worthwhile… well, usually.  Ask me again after one of those dark, cold and wet November night games.

On to the photos.  Remember, you’ll be able to access all of my Husky Athletics photos in the Archive (though it will take some time to get all of the old photos–dating back fifteen years!–transferred over). 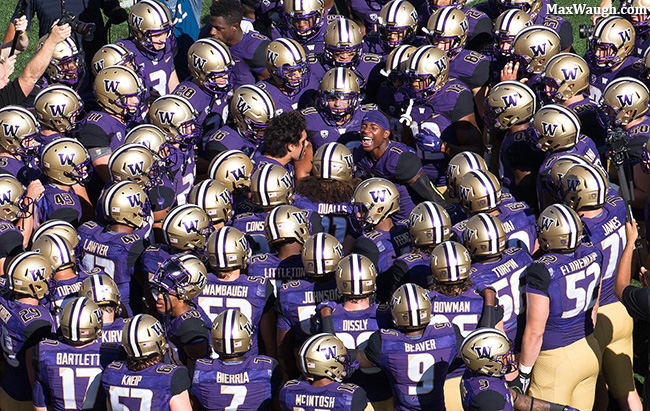 Jaydon Mickens fires up the team before the game. 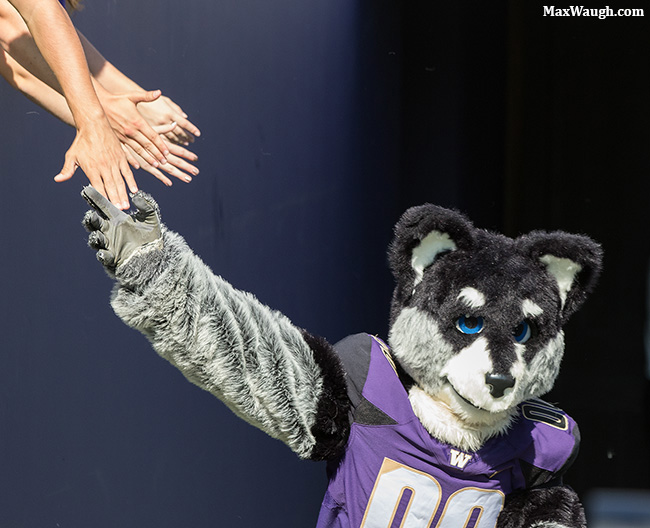 Harry the Husky high-fives fans as he enters the stadium. 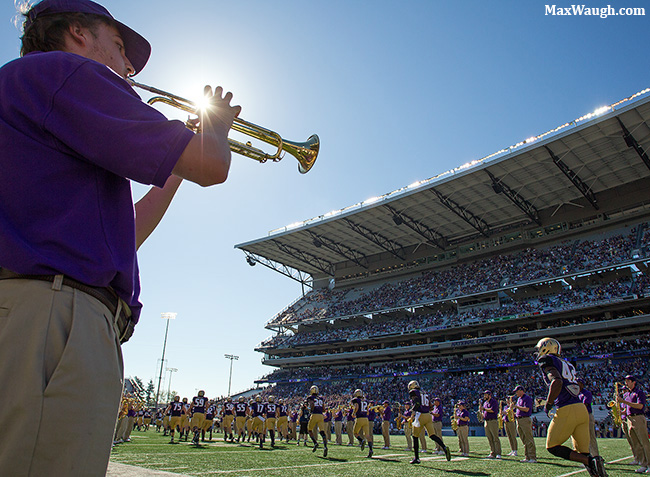 The Husky Band formed the tunnel prior to the game for the first time in several years. Hooray for game day tradition! 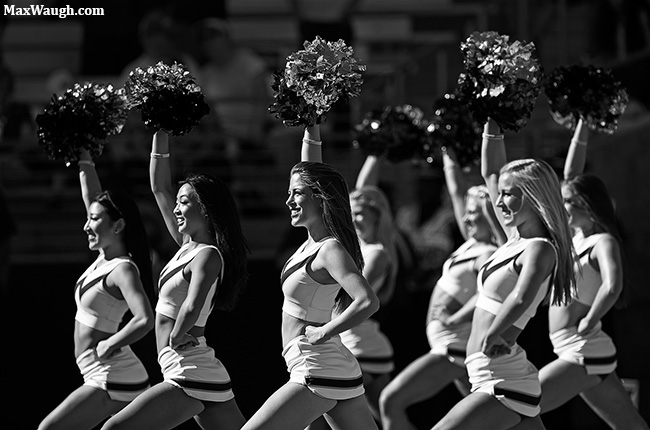 Husky cheerleaders perform a routine on a sunny game day. 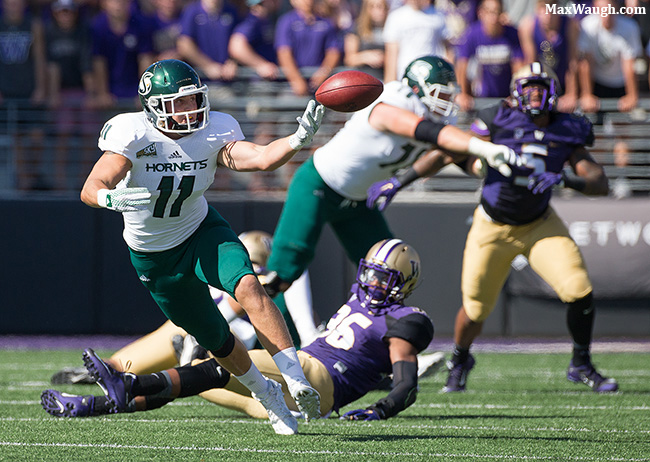 Stone Sander of Sacramento State lets a pass slip out of his grasp. 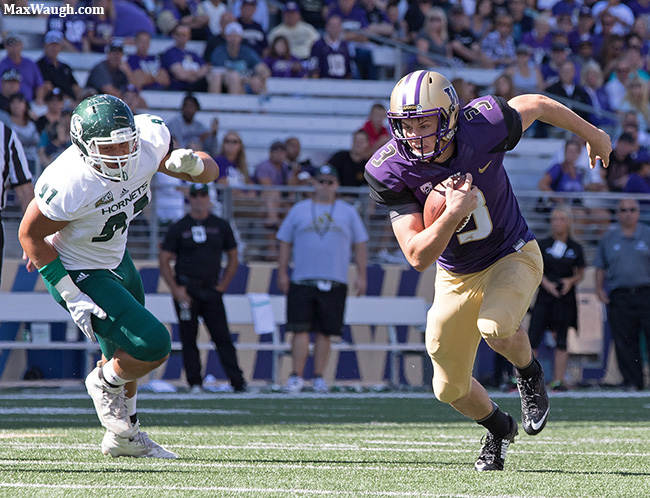 Quarterback Jake Browning scrambles for a first down. 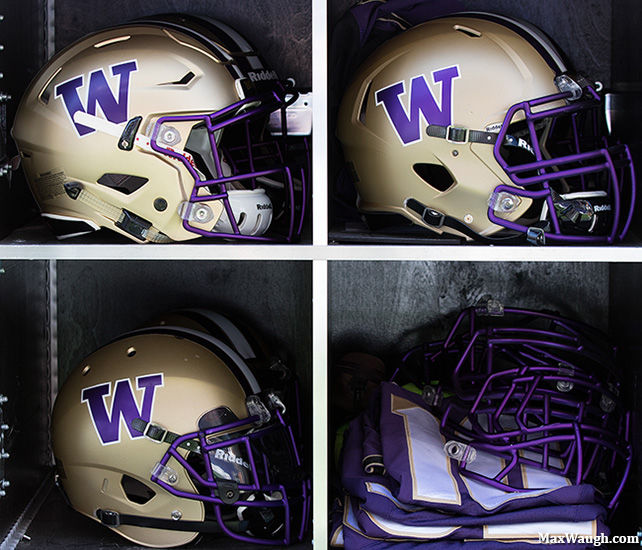 Spare helmets and facemasks on the sideline. 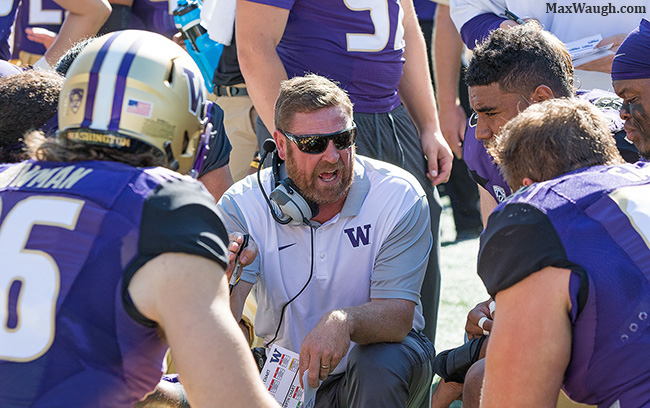 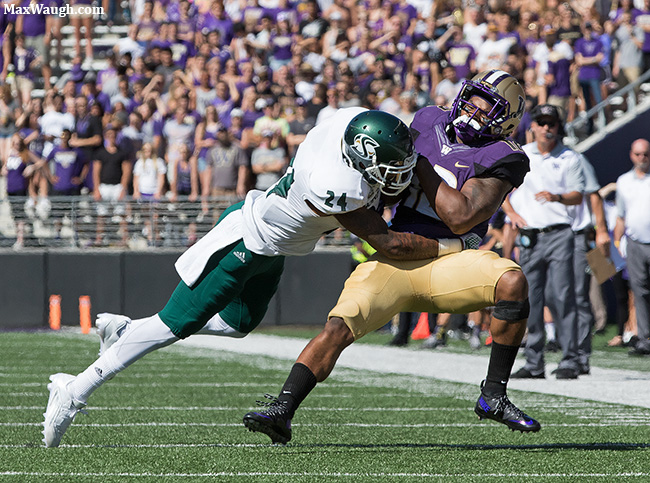 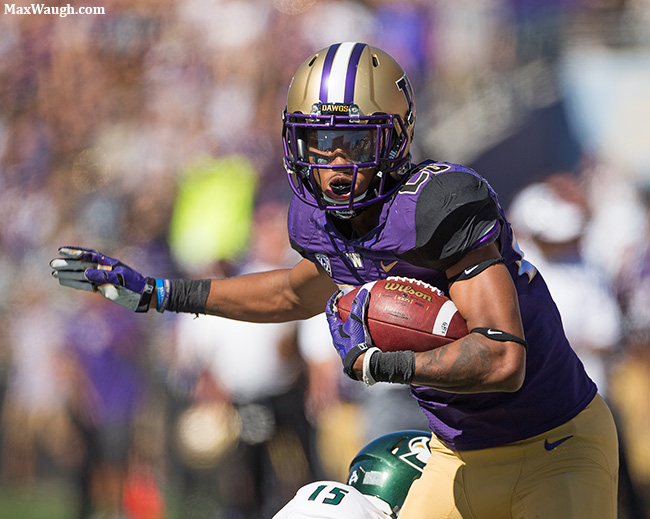 Kevin King looks for room to run after making an interception deep in Hornet territory. 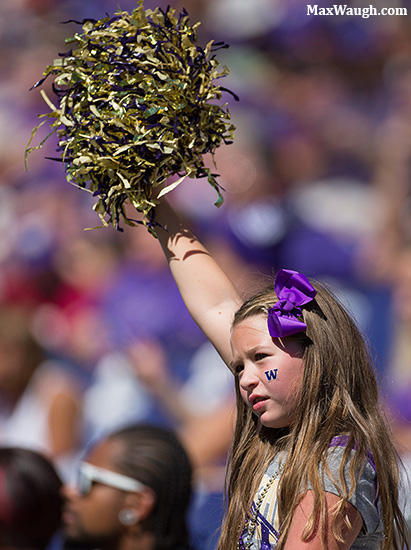 A young fan cheers on the Huskies. 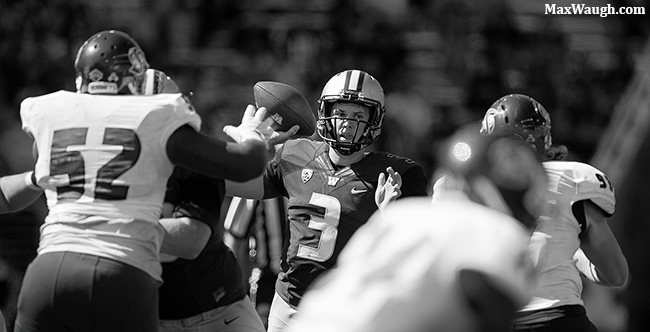 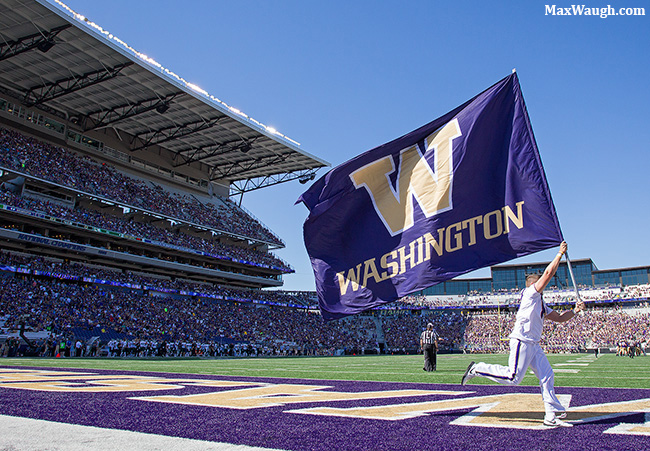 The flag comes out after another Husky touchdown. 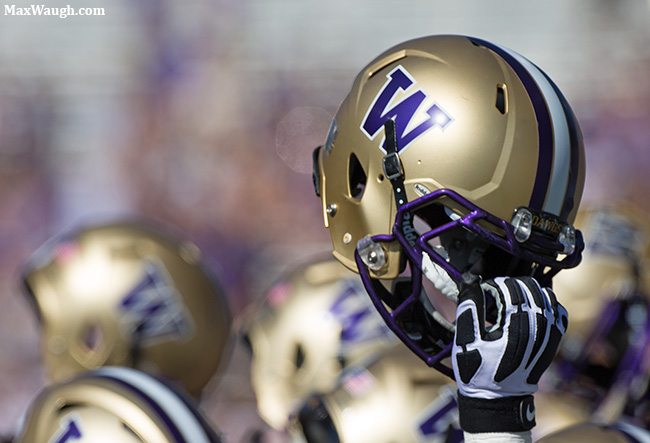 Holding the helmets aloft prior to kickoff. 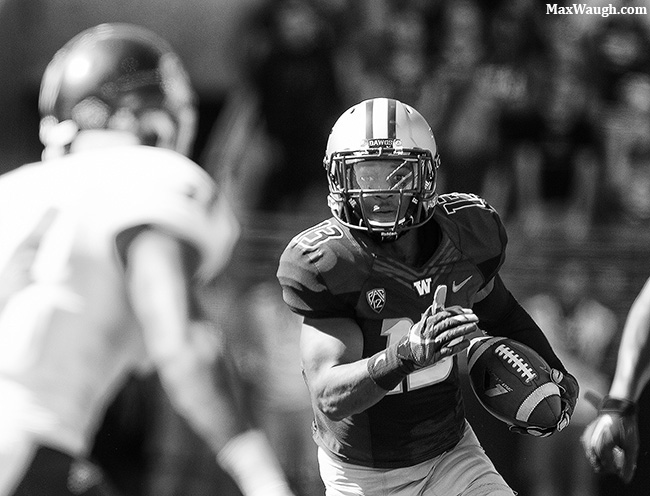 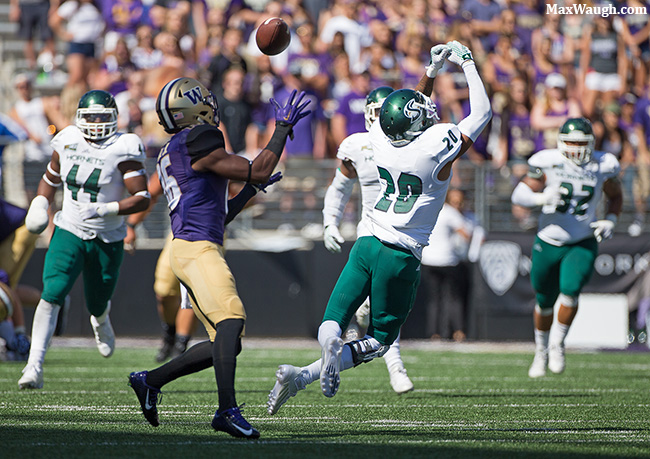 Hornet defensive back Nicholas Payne (20) lets a pass slip through his fingers… right into the waiting arms of Marvin Hall. 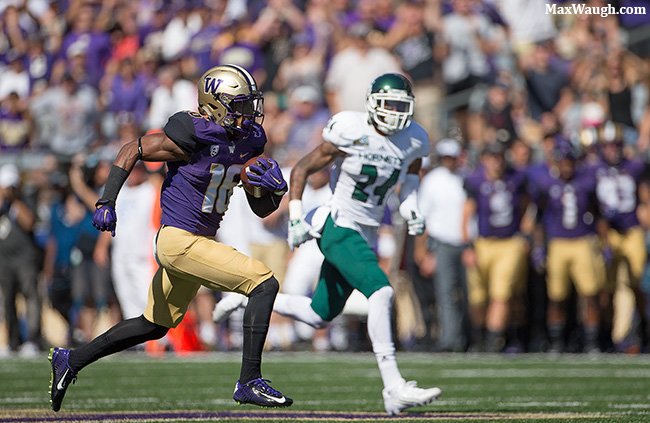 Marvin Hall takes a tipped pass to the house. 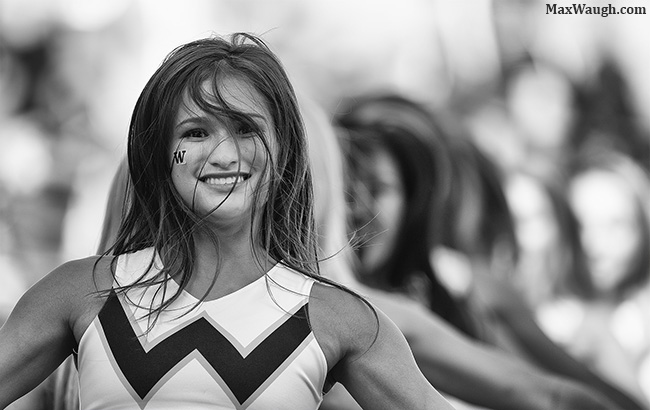 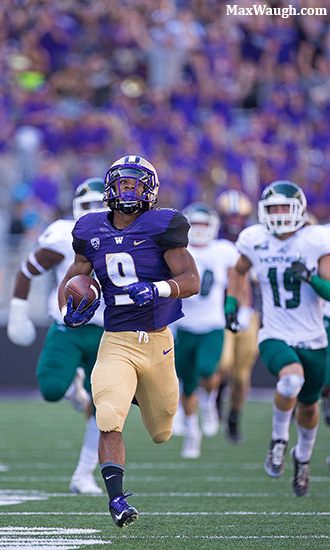 Myles Gaskin takes off on a 78 yard touchdown run. 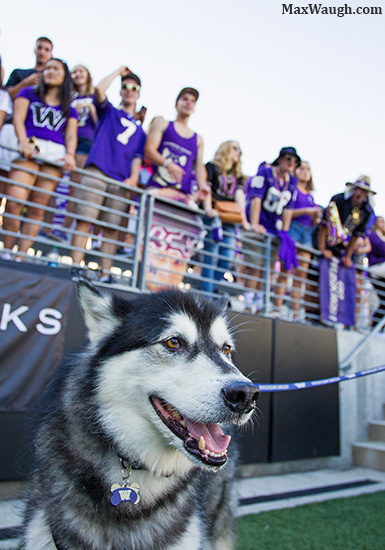 Dubs the mascot and Husky students take in some football on a sunny day at Husky Stadium. 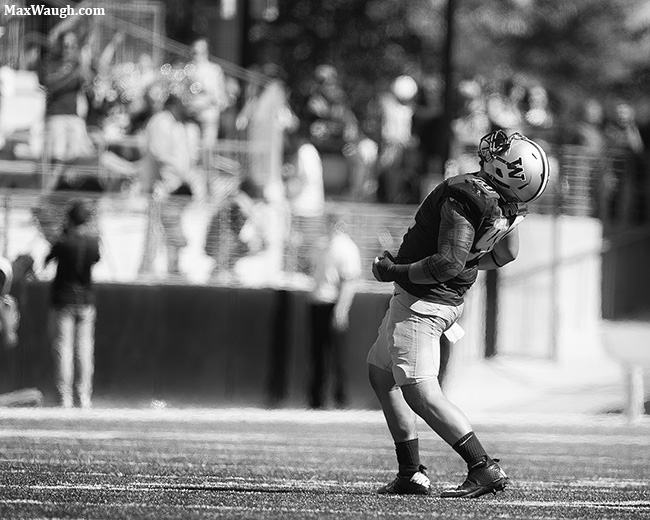 You can see a few additional images in the Sacramento State gallery in the photo archive.