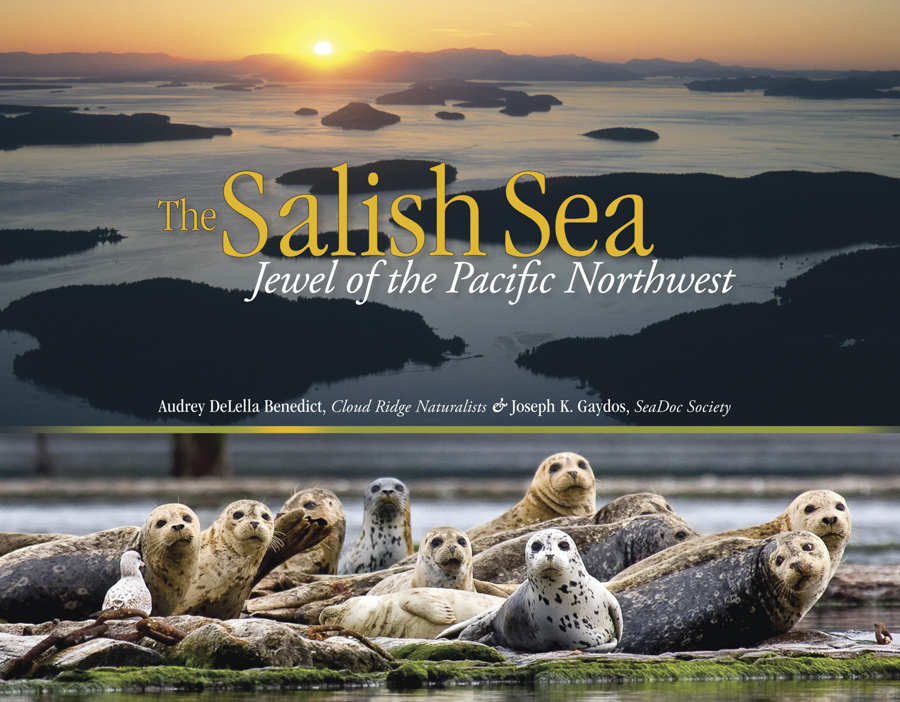 “Straddling the international border between Washington and British Columbia, the Salish Sea is a place of remarkable beauty and extraordinary biodiversity where the rhythm of life is set by the ebb and flood of tides.  This vibrant integrated ecosystem of saltwater and freshwater includes the inland marine waters of the Strait of Juan de Fuca, Puget Sound, and the Straight of Georgia.

These waters are home to a biologically varied and colorful array of life from amethyst-hued sea urchins, ochre-colored sea stars, and egg-yolk jellyfish to rich green underwater forests of bull kelp.”

–The Salish Sea: Jewel of the Pacific Northwest

Earlier this year I was sent an advance copy of The Salish Sea by the folks at Cloud Ridge Publishing.  Unfortunately, this occurred right in the midst of my spring travels, so it wasn’t until I returned from my latest Yellowstone adventures that I was finally able to sit down and read the book.

The Salish Sea serves as an all-encompassing introduction to the eponymous locale, a region that only earned its official title in 2009, twenty years after the term was initially popularized by Bert Webber.  The book looks at the area from biological, geological, ecological and even cultural and historical perspectives before ultimately asking what the 8 million people who live in the surrounding communities can do to help preserve this Northwest treasure.

Most readers, even lifelong residents of the Pacific Northwest such as myself, will only have a vague idea of what or where the Salish Sea is.  Though we’ve grown up near a coastline slashed by narrow inlets and waterways, bisected by straights and bordered by sounds, it may be surprising to learn that the sea spans a whopping 4600+ miles of coastline, over 6500 square miles of sea surface area and contains 419 different islands.  Authors DeLella Benedict and Gaydos have done a fine job illustrating the expanse and incredible diversity of the aquatic environment, while providing background on how things came to be and how the Salish Sea and its surrounding coastlines continue to evolve. 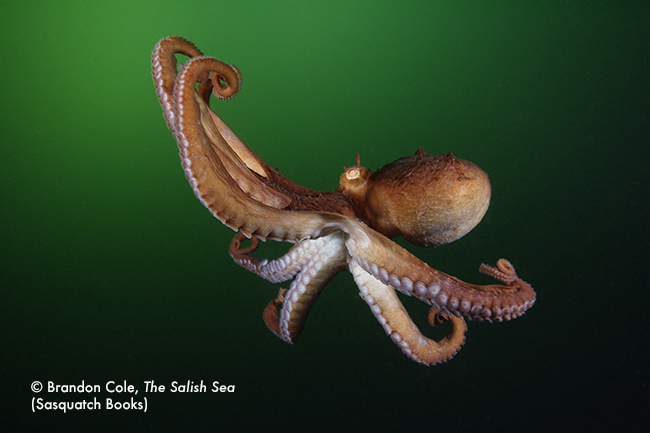 “The Salish Sea” is highlighted by a fantastic collection of photos, including several depicting underwater wildlife like the giant Pacific octopus.

The various chapters of the book shift our focus, moving from technical and detailed discussions of the geological past and present of the region to more general (but no less enlightening) descriptions of the different underwater, coastal and terrestrial environments and their denizens.  The wilder residents of the Salish Sea don’t just hang out underwater.  We learn not only about fish and crustaceans, but about the aquatic mammals who need to surface for the occasional breath, the birds who return to water time and again for food and about the coastal forests that also rely heavily on the sea’s bounty.

So yes, the book is educational, and a bit of an eye-opener for those who think the cold waters of the Pacific Northwest don’t house the same level of biodiversity as more well-known areas of the globe.

Does The Salish Sea suffer by being “educational” and informative?  Not any more than other similar “coffee table books” focusing on natural areas.  Sometimes, the learned background of its authors bleeds through and overwhelms the storytelling, particularly in the early chapter focusing on geology.  I’m admittedly more in tune with wildlife, and though I have picked up my share of information working in the field over the years as a photographer, many of the terms employed in the early chapters were over my head.  Dendritive, Silica-Filigreed, Summer Freshet, Anadramous, and so on elevated certain passages to a, let’s say, technical level I wasn’t expecting… nor one I particularly wanted to remain on for very long.  Thankfully, the authors toned things down as the book progressed.

Another popular tool the writers liked to employ was the call for the reader to pause, think and visualize.  “Imagine…” starts many a sentence, particularly in the early stages of the book.  Luckily for us, we’re not forced to solely rely on our imaginations, thanks to The Salish Sea’s biggest strength: the photography.

The publishers of this book deserve a lot of credit, because the images they chose are fantastic!  And they didn’t hold back.  From cover to cover, the volume is filled with bold, bright images showing off the amazing scenery and rich biodiversity of the region.  As further proof of their emphasis on presenting a visual treat, the creative team went to some of the Pacific Northwest’s best photographers for content.  Ken Archer, Glenn Bartley, Connor Stefanison, and Art Wolfe are just some of the artists whose high quality work is featured.  I found the underwater photography particularly impressive.  So many publishers are forced to skimp on photos these days, either relying on cheap stock imagery or being limited to only a few photos from top professionals, that their books usually suffer.  The Salish Sea is a visual feast.

For a paperback book, this is well-constructed, with thick embossed covers and sturdy interior paper.  The printing is excellent.

Verdict: I’d highly recommend The Salish Sea to anyone interested in learning more about Pacific Northwest wildlife and ecology, to locals in Washington and BC eager to learn more about our natural surroundings and the bounty we’re hoping to preserve, and to any photographers who simply enjoy perusing a book filled with high quality nature photography.

The Salish Sea: Jewel of the Pacific Northwest is now available for purchase at Amazon.com.

Images from The Salish Sea provided by the publisher and used with permission.