I’m back in the Greater Yellowstone Ecosystem for my latest autumn visit.  I’ll start by leading my final photo tour of the year, and then will stay on for a few extra days on my own.  As always, I’ll try to share interesting news and sightings from my adventures in my trip reports.  Please remember that due to my long and busy days while touring, tour reports will be shorter than my normal trip reports.

It was the first day of my fall photo tour in Yellowstone and the Tetons, which I’m co-leading with Zack Clothier.  We have a relatively small group for this trip, which is going to stretch over the next nine days or so, giving us ample time to explore both parks.

We had a good start this morning.  On Dunraven Pass we found three nice mulie bucks in the pre-dawn light.  Hayden Valley was clear, with only a bit of lingering mist on the river as we witnessed the remains of a bison herd crossing the river.  We were able to set up near the water’s edge to photograph three stragglers in very nice light. 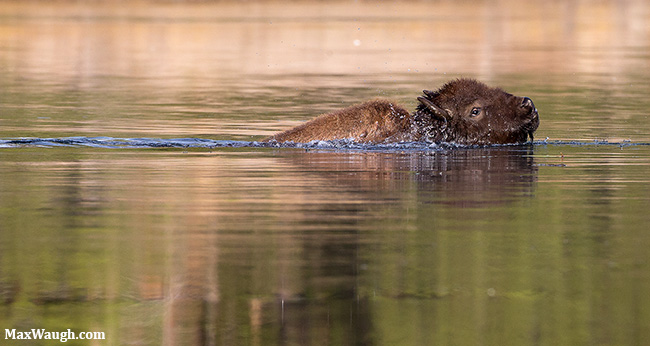 The Wapiti Pack were spread out in the valley, viewed from Grizzly Overlook.  We saw both alphas and two dark pups, though well out of photo range.

Further south, we had a large herd of bison wandering through the steamy thermals opposite from Mud Volcano, and then they too crossed the river (in the opposite direction from the first herd).

South of LeHardy Rapids, four trumpeter swans mucked about in the shallow river near shore.  Perhaps these were the four swans we first saw last fall after they had just been released in the valley (we saw them again in the spring too).

Out near Yellowstone Lake, the grizzly bear known as Raspberry and her remaining cub were out for a bit, though not quite close enough for decent photos.  We stopped by a couple more times during the afternoon, but they never got closer.

We went all the way out the east entrance and had lunch, but didn’t see much in the way of wildlife.  Back inside the park, we took the group on a hike.  It was my first time on the Storm Point Trail in several years.  A nice walk, though we didn’t see much beyond squirrels and geese out there.  A bald eagle and a kestrel soared past quickly thanks to the wind.

On our way back north things were fairly quiet, but we did have a very handsome coyote hunting near the road at Roosevelt.  Back at Mammoth we checked out some of the elk action (which was pretty benign).

On our second day we made our first trip to the northeast corner.  Once again, we started with mule deer, as three bucks were wading through the thick grass at Phantom Lake. 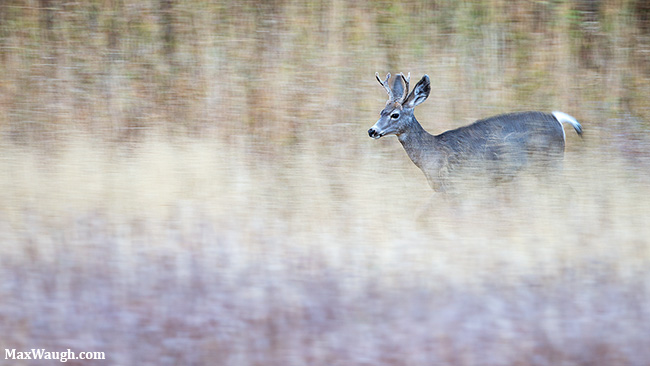 Deer continued to show up throughout much of the day, but most of the other animals stayed far away.  One exception was a small herd of pronghorns in Little America. 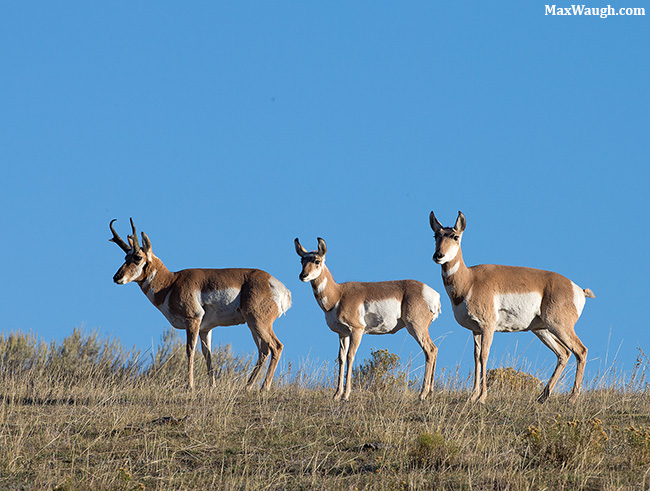 Other sightings included a distant grizzly bear in the Lamar, a napping black bear at 150 yards in Lamar Canyon (by the way, this is already a better bear trip than last fall, even with a few distant sightings!), and some mountain goats a mile or so away up on the Beartooth.  Up on the pass we did track down a few pikas, a tough order given the high winds up there.  I’m glad I was able to make one more trip up there this year since they’re closing the pass early this year.

We found another hunting coyote today, this time in the Lamar.  And on the way back west a large herd of bighorn sheep (ewes and lambs) appeared out of nowhere above the road west of Phantom Lake and started a sizable rock slide.  I quickly drove through to avert the mess.  On the way back through Mammoth a few different bull elk kept an eye on their harems.