We had an early start.  The Madison River was our goal, more specifically rutting elk.  I’ve never spent much time in that area in the fall, primarily due to the long distance from my usual bases in either Gardiner or Silver Gate.  But it’s certainly a better photographic location for elk than the busy mess at Mammoth.

We arrived just as it was getting light and found a couple different bulls west of the campground.  There wasn’t much in the way of action, but the setting was certainly an improvement over the background of buildings, cars and tourists further north. 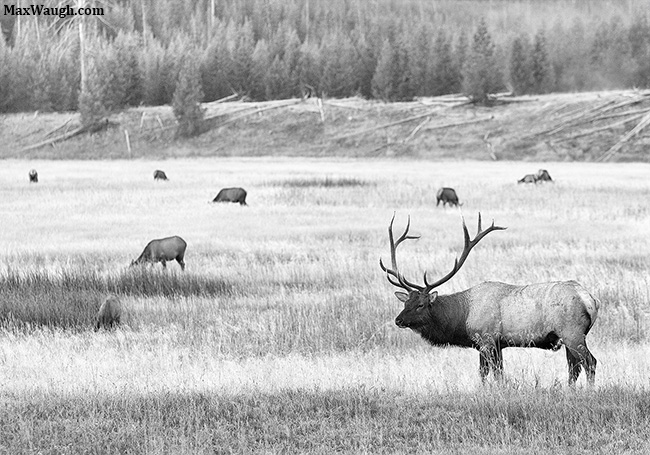 A herd of bison arrived on the scene eventually, prompting several different tourists to walk right up to them.  The bison goring season may not be over yet…

We were going to cut across to Canyon from Norris, but a nasty jam changed our minds.  So we went back south and visited a couple of the geyser basins near Old Faithful.  This is a wildlife and landscape tour after all!  After a picnic lunch we continued around the bottom of the loop and wound our way toward the lake.  We wanted to check on Raspberry one more time, in case we could get a slightly better photo op.  When we first arrived at Nine Mile, a crowd was there but the bears were bedded down.  So we made a short trip up to Lake Butte before heading back down, and on the return trip we saw the grizzly and her cub out foraging. 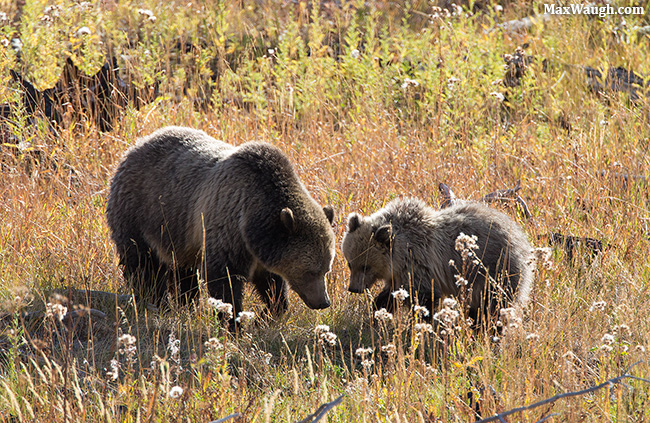 So we joined the party and tried to get a few shots through the dense trees and backlit grass.  The bears were closer, so it was a successful outing.

This was our transition day to the Tetons, but we allocated the morning to a final exploration of Yellowstone’s northern range.  There are loads of deer around right now.  We passed several during the morning drive, and even saw a foursome of white-tailed deer near the Yellowstone Picnic Area.

More ungulates included a couple of suicidal bighorn sheep along the road near Phantom Lake, and small scattered groups of pronghorns.  We have not seen much in the way of pronghorn rutting action, but the males are paying careful attention to the ladies. 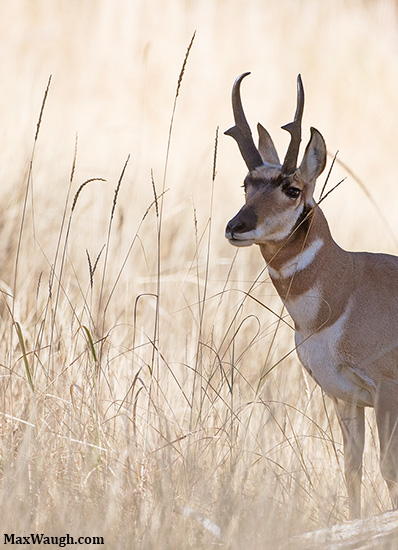 There are two wildlife attractions drawing big crowds right now: the Junction Butte Pack in Little America and Raspberry and her cub near the lake.  We drove past both jams today, but didn’t stop.  In both cases the wildlife was a bit too far away (though “too far” is a relative term, as the wolf distance is much further away in actual yards).

Lots of swans on the Yellowstone River in Hayden.  It appears three more cygnets may have been released this year, as there are now nine swans in close proximity on the river.

The Tetons, once we arrived, were largely quiet.  We’re a couple days late in regards to the foliage at Oxbow, but we didn’t see too much wildlife during our few hours in the afternoon.  Nonetheless, I expect a nice mix of landscapes and animals over the next few days down here.