Once again, I missed a close wolf kill site by a day.  I learned this morning that the Canyons had made a kill very close to the road south of Norris yesterday.  By the time I arrived, I had missed a distant viewing of three of the wolves, and much of the somewhat small carcass (a deer or elk calf) had been dragged off by the wolves the previous evening.

The afternoon was much more fruitful and fun.  I went on an owl quest with several friends, trying to track down a great gray for them in some of the great gray spots I’m familiar with on the east side of the park.  I initially struck out in the place where I found the great gray for my clients on Wednesday, so we moved down south of Canyon.  There, we quickly found an owl, but not the one we were expecting!

Soon after I mentioned how great grays normally perch lower than great horned, we spied a great horned owl… perched low.  It was a strange sight, especially given that it was around midday.  The great horned isn’t normally active at that time.  This one was perched right out in the open about 15 feet off the ground.  Soon a raven spotted it as well, and spent the next several minutes harassing it.  We had a lot of fun watching the interaction.  For some, this was their first owl photo opportunity, so it was a treat sharing the moment.

We did eventually renew our great gray search in that spot, but didn’t find anything beyond red squirrels, gray jays, and Clark’s nutcrackers. 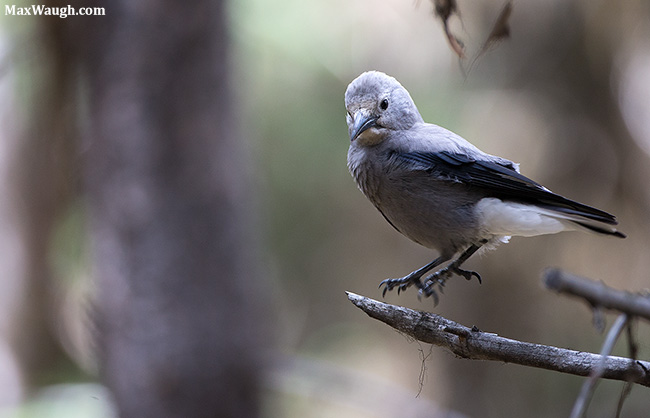 Heading south, we checked another spot before stopping for a late lunch.  Afterward, we decided to make a quick trip through Hayden Valley.  Though Hayden was quiet, we ran into Heidi near LeHardy Rapids.  She had just seen Scarface close to the road and was waiting for him to appear.  We waited for some time, but he never showed.  Somehow, the big lug gave everyone the slip.

Since it was later in the afternoon, I figured we’d have a better chance of finding owls with a repeat visit to a couple of the earlier spots.  It was closer to the great gray’s hunting time, after all.  So we returned to the place where we saw the great horned.  Unfortunately, we couldn’t go exploring, as a bull elk blocked the trail.  This was a blessing in disguise, however.  We next tried yesterday’s GGO spot for a second time this day… and it paid off!

While wandering the woods very close to where I found yesterday’s owl, I found another great gray perched at eye level in the shadows.  It eventually flew to the edge of a meadow and began to hunt. 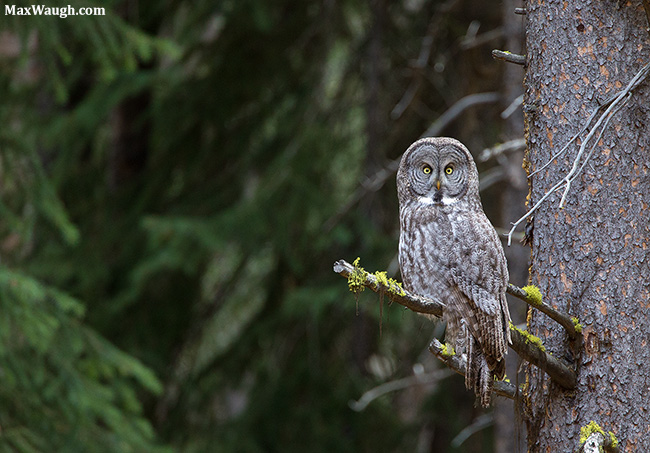 This owl was darker and didn’t have pointed tail feathers (the latter a good sign that it’s an adult), so it very well could be the parent of the owl I found Wednesday.  All the hard work searching paid off.  It’s been a great stretch for owls so far!

It was my last full day of the trip, and it ended up being very mellow.  I had few goals, so in the morning I searched for a hike.  Pebble Creek, a trail I’d never hiked, was mysteriously closed.  The Thunderer, another new one for me, ended in a ford of Soda Butte Creek and therefore was not an option.  So I wandered around the Pebble Creek area, including heading up into the canyon a ways.  I found a large pile of fresh grizzly scat, but that was about it.

Afterward I had to return to Silver Gate to wrap things up and prepare for my departure.  During the afternoon drive–a sunny and warm one–the only excitement was a black bear sow with single cub on the road at Phantom Lake.  Things were really a mess (people abandoning their cars and photographing the bears from 20 feet away), so I eased through before things go really snarled.

Another successful fall adventure is in the books.  I’d like to once again thank my clients from the tours I led: Bill, Charlotte, Ed, Juan, Nina and Rick.  Thanks also to Zack Clothier, my fellow guide on our group tour, as well as Judy at the Gardiner Super 8 and the team at the Ranch Inn in Jackson for hosting us.

Stay tuned for more photos from this trip.  If you’re interested in joining me on a future Yellowstone adventure, check out my tour website for more details on upcoming tours.

An Update on My 2016 – 2018 Photo Tours
Photo Contest Review: Yellowstone Forever… Should You Enter?