Travel horror stories are commonplace.  When you’re away from home and things go wrong, it can be about ten times as stressful as it would were you dealing with similar issues back home.  Problems abroad seem to be amplified, but some incidents truly are major calamities.  Belongings are stolen, someone gets ill, and so on.  Things like that can ruin a whole trip.

In February, for example, half-way through my India trip I found myself finishing up my stint in the Himalayas with almost no decent wildlife photos from the preceding two weeks.  And then my flight was cancelled.  And then I threw my back out in the middle of the airport, an injury that took several months to overcome.  Suffice to say, it was a disappointing trip, though ultimately it wasn’t a complete disaster.

Sometimes while traveling we make mistakes, suffer the mistakes of others, or simply encounter bad luck that can put us to the test.  The travel horror story is a rite of passage in some ways.  If you eventually emerge unscathed it can be something you’ll be able to look back at and laugh, or perhaps feel a tinge of pride for having endured such adversity in a foreign land.  And you will usually be a smarter traveler afterward.  This week I’ll share a few stories of misfortune that befell me during my travels, and the lessons I learned from them.

In the mid-2000s Scandinavian Airlines had a great airfare sale every holiday season.  They promoted an online advent calendar, and for each day in December they’d feature a 24 hour sale to one specific European destination city.  It was a heck of a deal.  Jenn and I first used it to travel to Spain in 2004.  When 2006 rolled around we jumped at chance to visit the UK.

There were some restrictions, of course.  Mainly that by purchasing these special fares, one had to travel in winter.  So we planned a trip to England and Scotland, and jammed our suitcases full of warm clothing and rain gear.  After all, the weather in the UK isn’t any better than what we experience back home in Seattle (in fact, it’s probably worse), so we felt we were well prepared.

Right up until the airline pilots went on strike.  While we were in mid-air.

Yes, they landed the plane.  But we had only reached Copenhagen, SAS’s hub and the place we were supposed to connect to London.  Upon deplaning, we were greeted by a confused mob of travelers, all of Scandinavian’s customers who were suddenly left in a lurch and couldn’t fly anywhere.  We were eventually told to go to a different airline, which was rebooking stranded passengers and would fly us to London.

Despite a slight delay, it felt as though our transition went fairly smoothly.  We did make it to London and weren’t too far behind schedule.  There was only one problem: our bags never arrived.  We had landed in the UK in the middle of winter with none of our winter gear.

That first night and the subsequent morning were rather hellish.  We had booked a hostel stay, but the “private room” we thought we had reserved ended up being a shared room with eight bunks.  The whiny Italian fellow who refused to give up the bunk we had reserved spent the rest of the night snoring.  So we dragged our jetlagged selves out onto the street at five in the morning, figuring we could rest at the Tube stop while we waited to catch a ride to the train station for our trip north.  Except the Tube was still closed and the station was open to the outdoors.  It was cold. 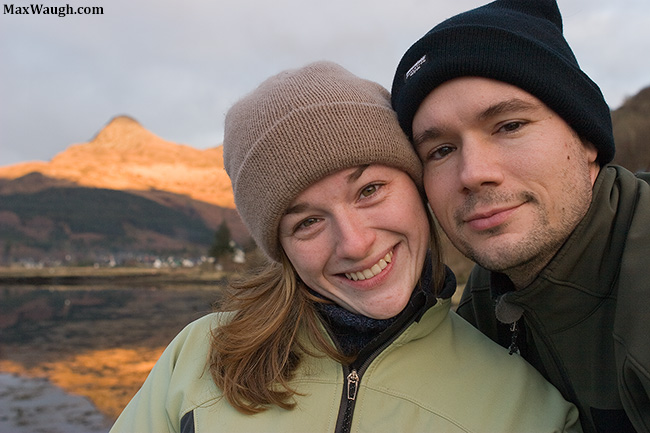 Modeling our new purchases in Glencoe.

Once we did get to the train, we made our way to York (where we were staying with a family friend).  The first stop in York was the mall.  We loaded up on clothes, especially winter gear.  British fashion at the time was nothing to get excited about.  Our options were pretty much confined to gray, grey, beige, tan and navy blue.  But we didn’t care.

The airline made a delivery to Yorkshire before we left for Scotland.  We were excited to see our bags again… except one was still missing.  Yes, the one with all of our winter clothing.  We were forced to move northward, catching the train to Edinburgh.  We rented a car to explore the Scottish countryside, traveling as far north as the Orkney Isles.  For winter, it was actually quite lovely.  It was cold, but remained dry most of the time.  I’d describe the Orkneys as bright and cheery, except by the time we’d finished our lunch sunset was already upon us, so there was very little time to enjoy the surprisingly nice weather.

In the meantime, our remaining bag kept following us, never quite catching up to us.  Finally, ten days after landing, we were greeted by our beloved bag back in Edinburgh.  Somehow we had managed to survive the UK in winter without any of our gear.

It took another six months for us to convince the airline to refund the cost of our extra clothing purchases.  On the plus side, I got a very nice (gray) cashmere sweater out of the ordeal.

So what lesson did I learn?  Always carry on warm clothing.  You never know when a flight may get rerouted or cancelled, and when you may get stuck in an unexpected city or airport overnight (or even longer) without your luggage.  I always make sure to at least wear a sweatshirt or jacket, warm hat and thin gloves whenever I fly.

Misadventures Abroad: When Things Go South in South America
Best of 2015: Favorite Photos and Moments of the Year