Misadventures Abroad: No Reservations Required at the Nude Beach

The is the last in my series of articles detailing some of the overseas misadventures I’ve endured.  If you missed the first two segments, you can read them here and here.

It took me a long time to officially get to western Europe.  I had been across the pond numerous times as a child to visit relatives in the Soviet Union.  And though I’d made one or two side trips to Finland where distant cousins resided, I didn’t really get to explore western Europe until 1998.  This was toward the tail end of my time in college, and the adventure bug had finally bitten me.  I was keen on planning a classic backpacking style trip across Europe.  My girlfriend and I went all out.  We set aside three weeks in August, signed up with a courier service (something that’s no longer possible) to get cheap airline tickets, got our Eurail Passes, hit up the Rick Steves bible to find all of the inexpensive holes-in-the-wall that would help us save a buck or two in France, Italy, Switzerland and Germany.  The classic backpacking itinerary if there ever was one. 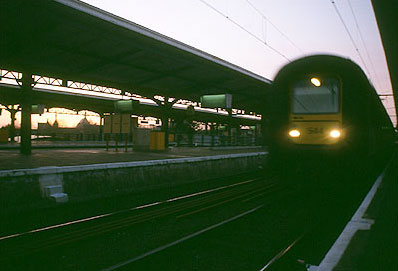 Of course, we were rookies, and naturally we made a few rookie mistakes.  On one hand, I like the flexibility offered by rail passes.  There’s something fun about being spontaneous and not adhering to a strict itinerary.  On the other hand, traveling in August–a peak vacation time for both foreigners and Europeans–means that reservations are generally a very good idea.  We kinda glossed over this fact.

We arrived in Paris.  And left almost immediately.  It was sweltering (100F+), and a city devoid of air conditioning and ice in one’s drinks was not our idea of fun given the record heat.  So we ditched France as quickly as possible for the relatively cool (hey, 90s!) Italian coast.  Our first destination was a Rick Steves staple: the Cinque Terre.  Five small, picturesque towns along the Italian Riviera, which in those days were still something of a secret.  Well, maybe not to the Italians.  Who were all vacationing then and all heading to the Cinque Terre with us.  The difference?  They had reservations and we didn’t.

We arrived in the first town and proceeded to immediately find Ivo the Barman (per the guidebook’s secret instructions).  Surely, Ivo could find a floor for us to crash on somewhere in town.  Nope, all booked up.

So we tightened our laces, adjusted our packs, and hiked to Town Number Two.  All five towns were interconnected by a coastal trail, so we could theoretically keep going until we found something somewhere.  The only problem was that the second town was full as well.  And we were suddenly running out of daylight.  Halfway to Number Three, darkness fell.  We stumbled about in the dark until we came across a picnic table along the trail, which we decided would be our bed for the night.  Far below, revelers partied it up on what we later learned was a private nude beach.  I think I know where I’d rather have spent the evening, but we were relegated to our makeshift wooden bed instead.  Laying side by side, arms hugging our bags tightly (which would somehow prevent theft in the middle of the night?), we tried to drift off to sleep and ignore the party a hundred feet below us.

After a fitful night, we stumbled into the next town before it began to stir and parked ourselves by the water.  A couple hours later we had breakfast in hand and found the first train out of the Cinque Terre (which was truly booked solid), moving on to a much larger destination that was sure to have lodging for us: Florence.  Which was wonderful, by the way.  And not just because I got to sleep on a real bed.

The lesson learned?  Spontaneity is great, but sometimes reservations are warranted (you can always cancel them later)… especially if you plan to vacation at the same time as the locals do.  Which, I generally would not recommend… though it could make for a fun story later.