This trip started a day earlier than expected, as I received an invitation to join a private snow coach for a day outing along the Madison River.  Everyone wants to see the bobcats there, so it was worth a shot despite the fact that they haven’t been seen the last couple weeks.

The last couple winters there’s been a very low snow pack during my visits, so I would hoping this winter trip might be different.  Indeed, the park has been getting more snow compared to recent winters… until now.  Temps have soared, and our day trip in the Interior was actually quite comfortable.  I never wore my winter jacket.  The uptick in temperatures may be one reason the cats disappeared as well.  If there’s less snow, hunting may be easier, so these nocturnal predators aren’t forced into searching for food all day along.

So no, we didn’t see any cats.  In fact, there wasn’t much action at all.  No foxes, no wolves, no raccoons (rare for the park, but which have been sighted a few times recently).  Only waterfowl and coyotes.  The coyotes provided our two highlights of the day.  A courting pair came close to the road at Elk Park.  We were thankful for something to shoot. 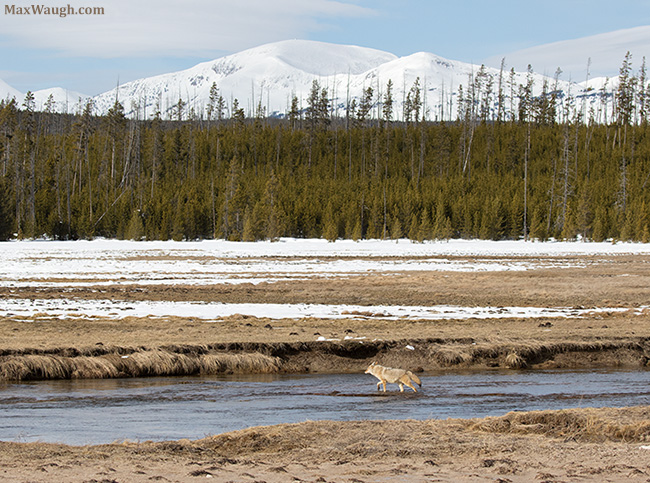 Later in the afternoon, three coyotes were walking along the Madison toward a week-old elk carcass.  Though they bypassed it the first time, they eventually circled back and came in to feed.

So it was a quiet day, but the weather was lovely and it was nice to spend a relaxed day with a group of friends.  I’ll be back in the Interior with my tour group next week, so maybe I’ll have better luck with the bobcats then.

It was a slow start on Saturday, thanks to a sudden snowstorm that paralyzed I-90 outside of Bozeman for a short time.  I didn’t make it into the park until the afternoon, and my main goal was to drive through and get up to my cabin.

I did make a few stops, but never found much to photograph.  Wolf watchers were set up in random areas scoping a long ways away.  Coyotes were present once again, with a distant pair yipping and howling near Slough Creek, and a lone hunter out past Soda Butte in the eastern Lamar. Aside from snow at Mammoth and in the northeast corner, the weather was gorgeous once again.

There was a bald eagle landing on the banks of the Lamar River, plenty of bison near the road, and I heard reports of a lot of moose on the cross country ski trail heading to Warm Creek.  Still, I didn’t snap a single photo on Saturday.

Silver Gate received a few inches of fresh snow overnight and it was still falling lightly when I got going this morning.  I love fresh snow on winter trips, as it makes it easier to pick out fresh tracks and get a better sense of what’s active.  Unfortunately, we’ve also got high winds right now, which often keeps some of the smaller, harder to find critters indoors.

It was a pretty quiet morning, occupied in large part by a failed attempt to locate a great gray owl.  I heard about a sighting on Blacktail Plateau, so I hiked back, but the owl was nowhere to be found.  I left my snowshoes in the car, so I was faced with a bit of a dilemma, ultimately deciding to venture offtrail and look around a bit in case the owl was in a nearby meadow.  No luck, but I sure got a nice workout post-holing up and down hillsides!

Luckily, the day wasn’t completely devoid of activity.  As I drove back past the Yellowstone Picnic Area in search of a spot to have lunch, I came across several photographers set up near the road.  A red fox was busy hunting in the trees.  There was no room for me to park, so I had to drive a ways down the road before I could safely pull off.  After walking back to the throng, I was able to set up and get a few photos of the fox through the trees. 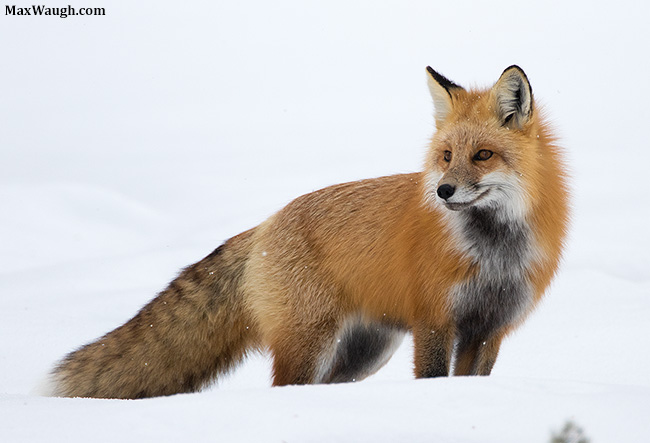 Though it wasn’t doing anything terribly exciting (the only pounce was obscured by trees), I have very few close shots of foxes in nice winter coats, so this was a nice encounter for me.

Eventually, the fox bedded down behind a small hill out of sight, so the crowd dispersed.  Following a quick lunch I explored a bit more before heading home.  The two moose I had seen at the Confluence in the morning had disappeared, while bighorn rams were on the butte across from Hitching Post, but there was little else on the wildlife front.

Let’s see what the park has for me tomorrow!