More snow for us up in the northeast.  Pretty soon I’ll have to call in the emergency snow plow or I won’t make it out of the driveway.

I left around the same time on Monday morning, about 7:45 or so.  The park road had not been entirely plowed, so it was slow going, especially when I came face to face with a juvenile moose.  It was daring me to make the first move. 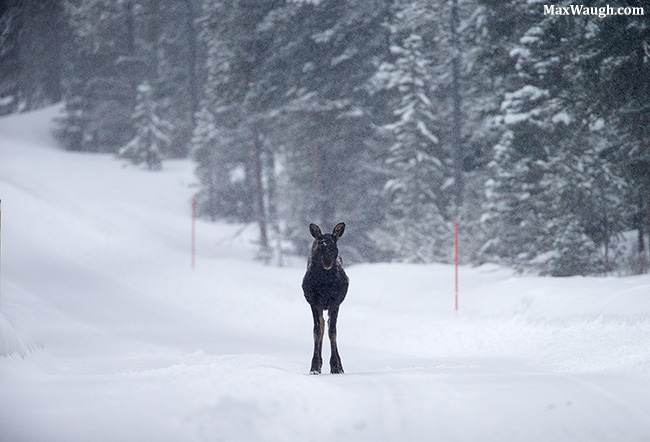 I waited a bit, but it seemed frozen in place, so I inched the car forward until it got the hint and moved off into the deep snow to the north.  The semi-blizzard-like conditions continued all the way into the Lamar.  There I arrived just a bit too late.  At the Confluence, otters had just been seen!  Unfortunately, they disappeared before any of the photographers on the scene could park and get their gear out.

Nobody knew which way the otters had gone.  They had simply vanished.  There were three options.  East, west or into a den hole nearby.  I wasn’t going to stand next to the road waiting (apparently they had caught a fish, which sometimes means they won’t come out again for a while), so I opted to check further into the Lamar.  In the past, I’ve had otters swim by me at the Confluence and continue all the way down the river to the Old Picnic pullout.  So I went down there, strapped on my snowshoes for the first time this winter, and hiked out to the river.

I waited a half hour or so, but there was no sign of them.  Most likely they had escaped into a den hole near the original sighting.  Oh well… at least someone saw otters.

I had sort of hoped that would be the last of my strenuous exercise for the day, but I decided to go check on the reported great gray owl spot again.  No luck.  Good thing I wore the snowshoes on the hike this time, as I had to go off-trail for a bit to avoid a couple of bison flanking the trail.

There was work waiting for me back home, so I slowly returned to the northeast.  Warmer temps and rain at Roosevelt and Little America (where the red fox had been active again in the morning) transformed back to snow in the eastern Lamar.  As I rounded the bend in the road approaching the Confluence and the Otter Spot, I noticed photographers set up, vehicles parked in the road… and two shapes next to the river lounging around in the snow.  Surely, it had to be…

I snapped a couple quick shots and kept moving so as not to add to the traffic build-up.  Up at Round Prairie, another coyote sat in the snowstorm, looking a bit miserable.  This time I was able to park and get out, in time to see it wading through the thick stuff. 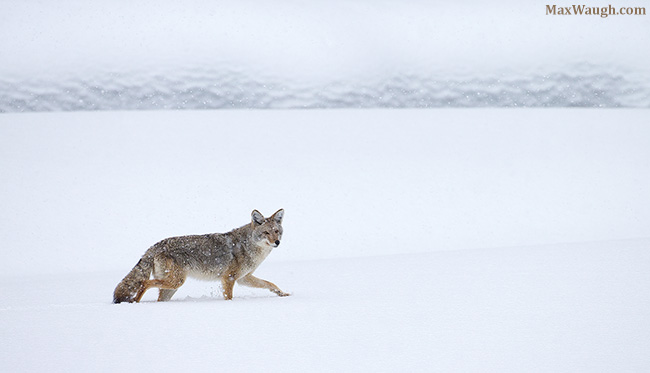 The rest of the drive was slow (even more snow coming down) but uneventful.  I rewarded myself for safely traversing the frosty roads with some ice cream at the Stop the Car Trading Post.

For once we didn’t get any snow overnight.  Also, my driveway is plowed now, so it was a bit easier hitting the road this morning.  Temps were mild as expected, but the promised rain held off most of the day.

Though I felt compelled to stay in and work today, I wanted to see if I could strike gold with those otters.  A long shot, for sure, but it’s possible they could reappear in the same area of the Lamar River.  Well, as you might expect they weren’t anywhere to be found.  But I did get lucky further down the road.

Surmounting the last hillock before the Fisherman’s pullout in the western Lamar, I spotted an orange blob trotting toward the road.  A fox!  I’d heard about this fox from others who had also seen it approach the road in recent days.  It was actually one of numerous foxes that have been seen both in the Lamar and elsewhere.  This has to be the best winter for foxes in the northern range since record snowfall in 2010-11 brought numerous foxes down onto the floor of the valley to hunt what was a blank white canvas back then.

This was a lovely fox, much lighter than the one I photographed a couple days ago.  I was able to find a safe spot to park and spent the next hour or more with it.  There was time to shoot all sorts of photos, both near and far.  I even worked on some motion blurs. 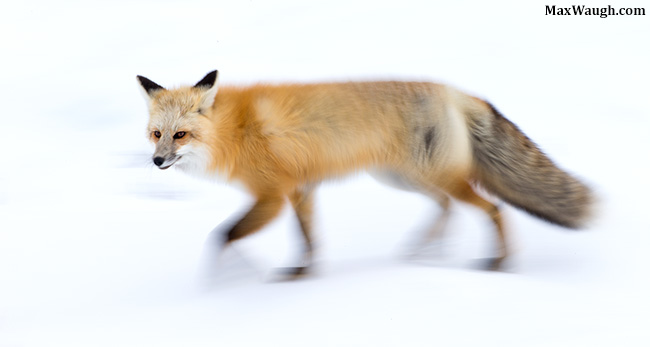 It was a very fun shoot.  And while all this was going on apparently a second fox had popped out near where this one first appeared.  There were also three coyotes in the area.  The canids never did cross paths, but obviously it was a hot dog spot.

That was all good fun, but I felt like moving on.  The fox wasn’t mousing cooperatively, so I figured I’d check back later in case it was hunting more actively later.

I went to Roosevelt, where I put on the snowshoes and tromped around looking for any recent sign of the bobcat there (it had last been seen a few days back, supposedly).  Alas, all was quiet.  But at least I got another workout in.  Afterward, I heard about another fox hunting near Floating Island Lake.

I had to take care of business in Gardiner before I could return to the park.  When I did head back east, I made a token stop at Hellroaring Overlook.  I had to peek through a scope so I could at least say I’ve seen wolves on this trip.  The Lamar is devoid of them at the moment (except for one unfit individual), so Hellroaring is the main spot for viewing right now… obviously from a great distance.

At least I made my ten seconds of scope time count.  The Junction Butte Pack was on a kill.  I saw five of the wolves feeding, and while I was watching one of the blacks made an acrobatic leap trying to catch a raven out of midair.

Okay, I got my wolf fix.  On the way back to the east, I just missed what could have been the rarest sighting of the trip.  A couple had just spied a marmot in the Lamar Canyon.  I speculated whether it could have been a marten perhaps… a winter marmot sighting sounded odd.  But they showed me the photo, and sure enough, it was a marmot.  I guess the warm temps today were throwing the wildlife off a bit.

Back in the Lamar, some photographers were still with the same fox, a good four hours after the fun started.  By the time I returned it was pretty far out on the valley floor.  A good opportunity to work on some minimalist compositions! 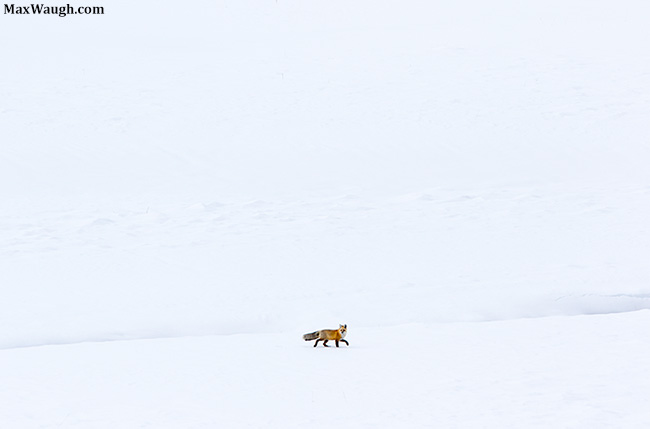 It was a quiet drive home after that.  Several bighorn rams were out across from Hitching Post, and I stopped in a few places to look for signs of ermine without any luck.  Overall, thanks to the fox it turned out to be a good day.