I may not get to spend another full day in the park until my tour starts.  Wednesday I had to spend the entire morning matting photo prints, and still only got about half-way done.  I wasn’t going to stay cooped up indoors all day, so I went in for a few hours in the afternoon.

The main thing I missed in the morning was even more fox action close to the road.  By the time I got in, I did see one of them, a tiny red speck out on the floor of the Lamar Valley.  Too far for even minimalist compositions, so I continued toward Roosevelt, where the “Crevice Fox” was back.  This fox has been bedding down in the crevice of a rock wall the last few weeks, but it was the first time it’s been in this spot when I’ve driven by. 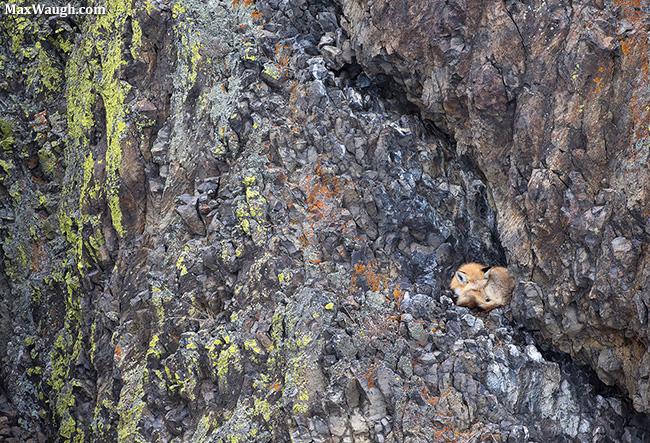 I waited around and took a few snapshots, but the fox was settled in pretty firmly.  A raven did stop by to entertain us a couple times. 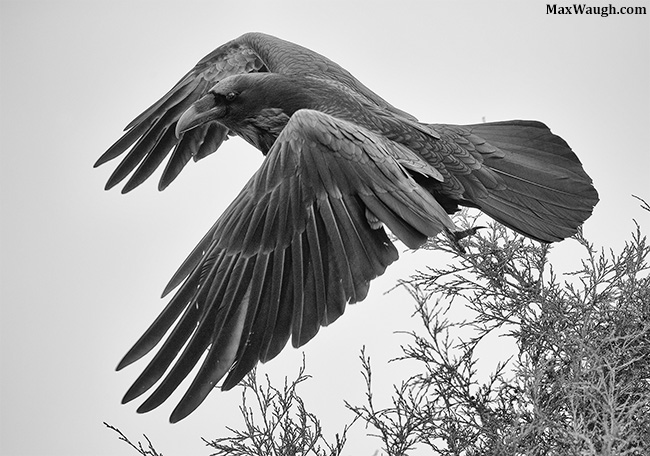 After an hour, I decided to use the limited hours remaining to explore a bit more.  Didn’t see much, though now both western Lamar foxes were out.  One was somewhat close to the road, but at that moment a friend drove by and gave me a tip that the Lamar gray pup had been seen close to the road further east.

I was probably a good twenty minutes behind that wolf, so by the time I arrived all I found was tracks in a couple different spots.  This wolf is not doing very well, having been separated from its pack and scavenging somewhat desperately for food (it even cannibalized some of its sibling, which had been killed by the Mollies Pack a while back).  Nevertheless, it still has massive paw prints and clearly moved well enough to disappear out of sight before I arrived.

Oops, I slept through my alarm.   Luckily, I didn’t miss too much, and it turned out the Lamar was hopping this morning!

On the way through the eastern valley, the two moose were back at the Confluence and the bighorn sheep were out on the hillsides.  Further west, two of the valley foxes were active (though not as close as in past days), as were a few coyotes.  I backtracked through the Lamar more than once, seeing bald eagles and a golden eagle.  And then I completed my Three Dog Day, spotting the mangy gray wolf that had eluded me yesterday afternoon.  Though not great for photography, this was the most active morning of the trip so far.

I did eventually make it out of the valley to check a few spots further west, but didn’t find as much.  With warmer temps and intermittent rain and sunbreaks, some large rainbows appeared on occasion, but all of the bison or other wildlife I wanted to frame in front of them vanished at the most inopportune moments.

On the way back to the Lamar, there was a coyote hunting in the deep snow banks below the road near Slough Creek.  No sign of any foxes, but as I crested a hill past the Institute, I spied a large crowd of vehicles and people, some out in the middle of the road.  I looked to the left and there was the mangy gray wolf, having just crossed right in front of the throng. 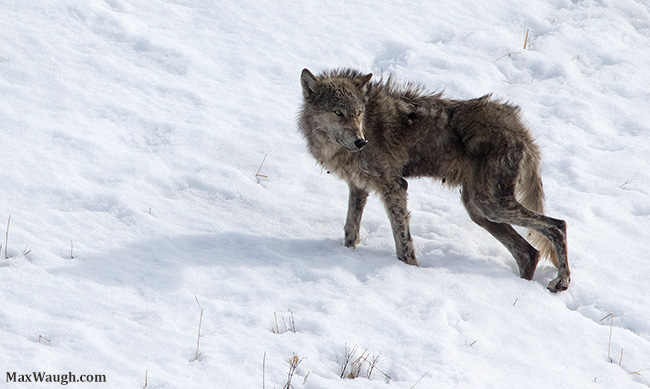 I was able to snap a few shots out the window as I waited for traffic to clear.  This is definitely not what a wolf should look like in winter.  Suffering from mange and having been left behind by its packmates, it’s looking extremely weak and pathetic, and may not have long to live unless fortunes change soon.  There was thought that this is one of the pups from the Lamar Canyon Pack, but some are questioning that based on its size and markings.  It could be one of last year’s Lamar pups.  Regardless, it was not a pretty sight.  I heard later that it simply stood in place near the road while people watched and took pictures.  When one’s desperate, I suppose it’s easier to overcome one’s fears.  This wolf is currently tuning out the crowds and concentrating on survival.

It was time to head home (more work!), but on the way I found another species I hadn’t seen yet on this trip.  A trio of ruffed grouse was foraging along the treeline east of Pebble Creek.  I was able to snap a couple of distant shots before they disappeared. 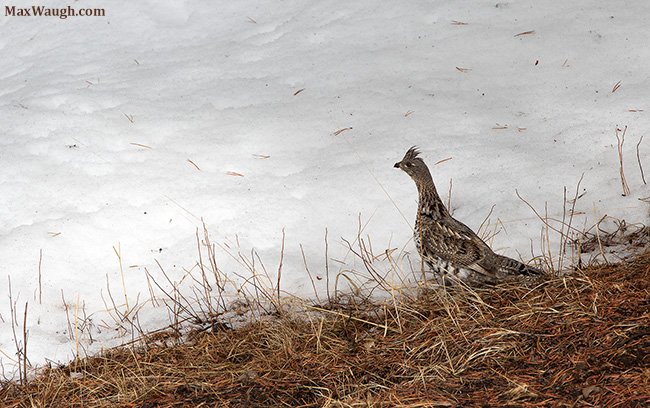 That’s it for the solo portion of the trip!  Tomorrow I meet my winter tour clients, and over the following week we’ll be splitting time between the northern range and the park interior.  Expect reports to be slightly truncated from here on out.