My winter tour has begun, so expect the remaining reports to be slightly truncated.  I will try to list the highlights of each day so you still have a sense of what’s happening in the park.

Today was Pick-Up day, so I didn’t have time to linger and look for wildlife on my drive through Yellowstone.  That doesn’t mean I didn’t see any wildlife though!  Here’s a quick rundown of what I saw as I went out to pick clients up in Bozeman, as well as on the way back.

During the morning drive through, I saw the moose at the Confluence again, as well as one of the Lamar bald eagles perched in a familiar spot near the Old Picnic pullout.  A fox disappeared out of sight as I went past Floating Island Lake.  On my way north up Highway 89, a golden eagle was feasting on a deer carcass right next to the road, completely ignoring traffic as it zoomed by (but flying away if anyone slowed down to get a better look).

On the way back south, the golden was still there.  Later, I gave my clients the option of driving the Boundary Road between Corwin Spring and Gardiner.  Due to the recent bison hunt, this isn’t a desirable destination for everyone (since remnants from the hunt are still being picked apart by scavengers, though thankfully not too close to the road).  But my clients were up for it.  So we made the detour and it paid off with loads of mule deer, elk and pronghorn sightings.  No bighorns, oddly enough, though it may be a little late in the season at this point.

Saturday is the first full day of exploration for this group.  We’ll spend our day up north before prepping for our snow coach trip into the interior.

The first day of exploration during my tour was chillier, which at least meant the rain would hold off today.  We had a mix of sunbreaks, a lot of wind and even fog and snow toward the end of the day, but hey, no rain! 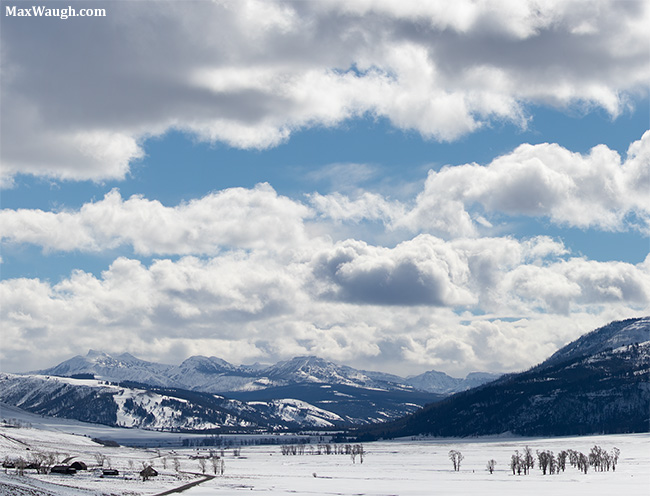 It was a very active day, wildlife-wise, but much of the action occurred further away.  But we kept at it and were eventually rewarded with some nice photo ops.

We saw a lot of canids, especially coyotes (at least seven or eight), but most of them were hunting far from the road.  In the morning we also found one of the Lamar foxes out on the floor of the valley.  Given enough passes, we figured we might have a chance to see it hunting closer at some point.

The moose were still parked at the Confluence, and several bighorn sheep were on the hills there and across from Hitching Post.  We photographed the latter for a short while, but they weren’t particularly active, so we returned to our vehicle… only to turn and see a coyote zoom out of nowhere and nearly herd the sheep right off the cliff!

Nobody was able to photograph that action, but it at least brought the sheep closer and brought us a few more photo ops.

After lunch in Silver Gate, we returned for a few more drives between the Lamar and Little America.  Finally, our faith in the fox was rewarded, and we had a couple of short sessions with it right near the road. 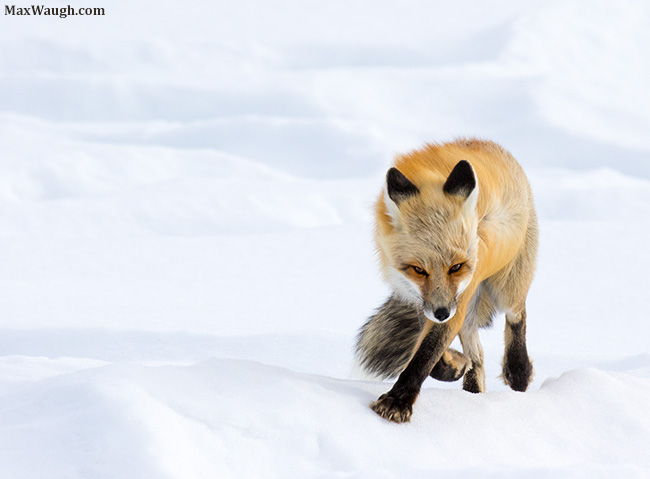 On our way home, we even had some nice bison photo ops as the late afternoon sun broke through a large bank of storm clouds.  Overall, it was a great first day in the field with my clients.  Tomorrow we switch things up and head into the park interior on a private snow coach for three days.