Cold and crisp.  Actually, it was really cold on Tuesday morning.  It finally felt like a real Yellowstone winter day, with temps around -15F as we entered the park for our final day in the interior.

A wildlife encounter started things off, a run-in with a coyote along Riverside Drive above the Madison.  But after that we spent a lot of time shooting landscapes.  The frigid temps combined with clear skies made for some really cool steamy scenes along the river.  Ice crystals blowing off the surround cliffs made for a massive swath of rainbow-like colors above the trees.  And here and there bison endured the morning cold.  Overhead, the wolf survey plane buzzed by (apparently they spotted a bear out and about nearby!).

We turned south and drove along the Firehole River, stopping when we spied fresh wolf tracks (Canyon Pack?) near the road… and we lingered when we were distracted by more lovely winter landscapes.

At Fountain Flats, a large herd of bison grazed under a layer of fog that enveloped the surrounding land. 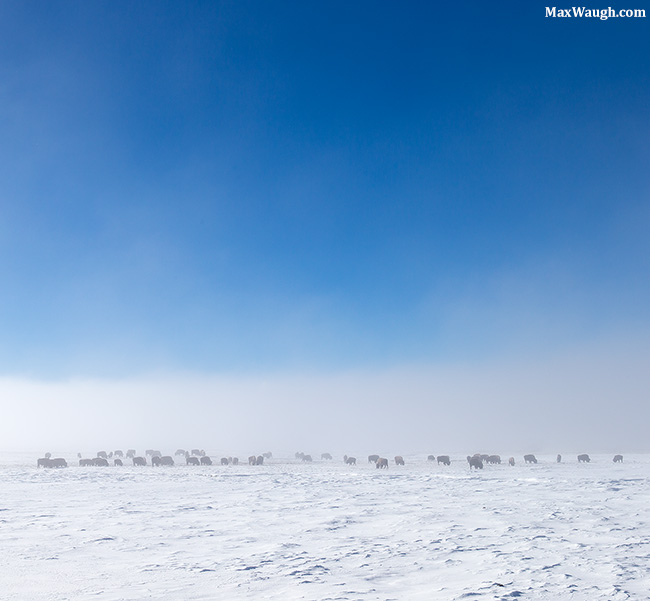 I used it as an excuse to practice some abstract photography using long exposures and my zoom lens.  As you’d expect, most of the resulting images were garbage, but maybe a couple worked out (I’ll have to look when I get home).  Afterward, I took my group to another of my favorite winter stops and a fun place to work on more abstracts: the stand of Bobby Socks trees south of Fountain Paint Pots.

From there we drove around the southern end of the loop before arriving at West Thumb Geyser Basin.  We roamed the boardwalk looking for landscape photo opportunities, but were also entertained by mountain chickadees and a red-breasted nuthatch.

We finally made it to Fishing Bridge for a late lunch.  And then the action really picked up.

Between Fishing Bridge and Alum Creek, we spotted six foxes and a pair of coyotes.  The highlight had to be a courting pair of foxes, which came very close to us a couple times as they danced on the valley floor. 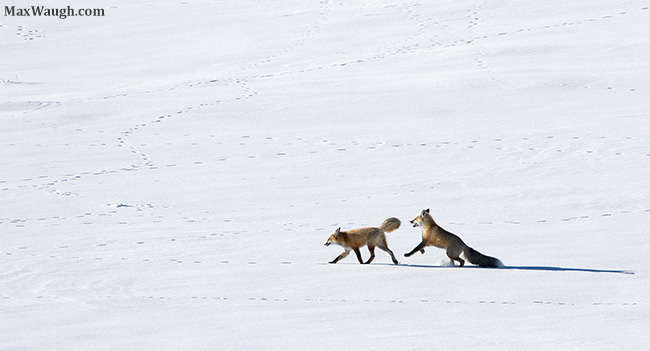 The bob-tailed vixen even performed some half-hearted mousing for us while her stalker sat nearby.  She didn’t give us the full jumps most photographers strive for, but it was nice to see this action against a clean background (no sagebrush!).

Another great day in the interior, no doubt.  This has already been my best winter tour to date, and we still have two days remaining!

Oh, and if that wasn’t enough, I spotted a pine marten in the darkness as we approached Mammoth.  Now we just need to find one in daylight…

Things didn’t start well this morning when we got off to a late start and were then caught in a bison jam on the narrow canyon road between Mammoth and Undine Falls.  It took a while to negotiate the buffalo backup, but we eventually made it through.  Just in time to see three coyotes above the road on the Blacktail.  They turned uphill and disappeared before anyone could snap photos.

The initial exploration of all points east was quiet.  That was the consensus among the guides I spoke with as well.  But we all know it’s usually a matter of time before something shows up.  Not surprisingly, a fox was among the first major sightings, though it was too far out to photograph.  Bighorn sheep were grazing right off the road at the Confluence, but nobody wanted to stop.  Perhaps we’re spoiled by this point in the trip. 😉

Then we had the highlight of the day, provided, surprisingly, by a bald eagle.  We had seen the eagle perched on the icy banks of the Lamar River earlier in the morning, but when we drove back through it was up in a tree.  So we got out in hopes of landing some takeoff/flight shots.  It took a while, and the conditions weren’t favorable.  The eagle was facing away from the light (it even spread its wings to let the sun dry them and its backside for a spell), and despite the frigid temps (-8 at one point), there was a lot of “heat haze” affecting our photo quality.

Beyond all that, the eagle wouldn’t budge for some time.  After a good half hour or so, it finally launched. 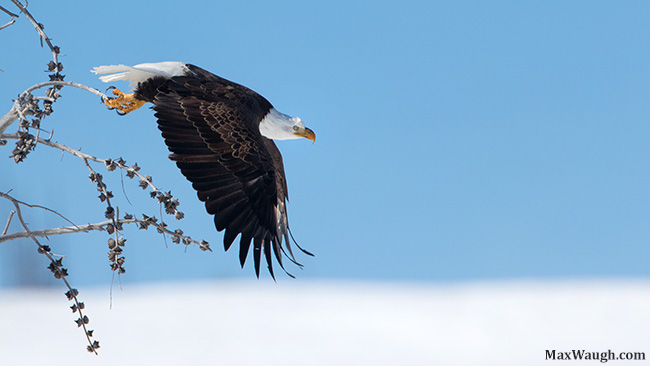 Instead of flying off, the eagle landed back on the ice near the river.  And then it hopped into the water twice.  The first time it came up empty, but the second time it emerged from the water with a fish in its talons.  So much for the classic swoop and dive when fishing.  Apparently it just takes a small skip and a hop to land lunch in these parts.

Almost immediately after the eagle landed back on the ice with its catch, two magpies flew in to see what they could steal.  While the eagle picked at its meal, one magpie would try to distract it by plucking at the eagle’s tail feathers.  The other would use this opportunity to snatch a piece of fish away.

The magpies harassed the eagle a while longer before it finally flew off with the remains of its trout.

Following our own lunch—during which we were not harassed by magpies—we drove back west to see if there was any action roadside.  At the recent mountain lion kill at Geode, a pair of coyotes was feasting.  We didn’t expect to see the cats in broad daylight, but it was nice to see some action on the elk carcass.

Another trio of coyotes napped near Elk Creek.  Back in the Lamar, it was fox time all over again!  We spent a long time following a hunting fox on the other side of the river.  I was able to record a few mousing leaps on video (which I do for fun from time to time), but didn’t come away with any photos.  While tracking this fox, we could see a large school of trout in the river below. 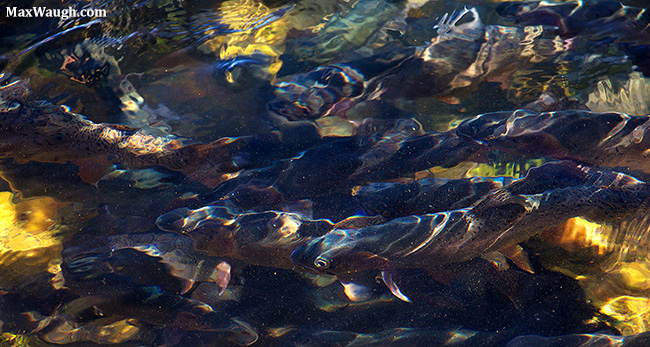 Someone alert the otters!

Further down the road, yet another fox (a handsome lighter furred individual) was causing a bit of a traffic jam near Hitching Post.  And when we returned through the Lamar one last time, another fox was trotting near the road.  So yeah, four more foxes today.  Ho hum?