It was the final day of my winter tour, and it started with… a whimper.  There was very little activity this morning during our initial drive.  We saw a pair of coyotes in the eastern Lamar, and that was just about it.

We were busy cracking jokes about what a slow day it was when we happened upon a mysterious gathering of wolf watchers and photographers in the middle of the Lamar.  What was up?  These folks had not been there a half hour ago.  We pulled over and saw Karin, a past client of mine, already setting up her gear.

Wow, the Mollies Pack was back in the Lamar.  This isn’t their home turf, and when they do come this far north it often spells trouble for the resident wolves.  They’ve killed several members of the northern packs when they’ve encountered them, including a Lamar Canyon Pack pup earlier this year.  So the Mollies were back, perhaps for food or because the alpha female is looking for a mate.

But sixteen?  Believe it or not, I’ve never seen a big wolf pack before.  Heck, I got excited when I managed to photograph six Lamars last May.  Now I was struggling to fit as many wolves as I could in the frame.

Though the wolves were very distant, it was an incredible sight.  Over the next couple hours, we worked our way east, going parallel to the wolves, and keeping hope alive that they may come closer.  Ultimately, we ended up at Hitching Post, where the wolves did get a bit nearer to the road but were never more than dots.  At one point, the pack took up a group howl.  A howl from sixteen wolves sounds a heck of a lot different from your typical wolf howl from one or two individuals.  It was a strong chorus.

And soon, the Lamar Canyon Pack answered with their own howl from behind us.  That may have been a bad idea.  The Mollies were about to disappear to the south, but heard the Lamars and returned.  They howled again, and then proceeded north.

As you might expect, a large crowd was following their every move. 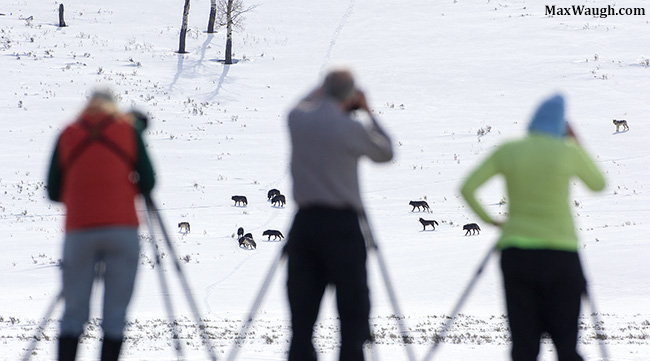 We made one more jump down the road to the Footbridge pullout, where we watched the Mollies climb the hill and further away.  At this point I figured it was a good time to break for lunch, thinking the wolves weren’t going to get closer soon.

Well, I was right about that, as the Mollies bedded down in the trees.  But lunch ended up being a bad idea anyway.  Soon after we left, two ermine popped out of nowhere and began entertaining the crowd!  By the time we returned to the Lamar, one or both had been out for an hour or more, and we only arrived for the last thirty seconds of the show.  It was enough time to snap one sharp picture. 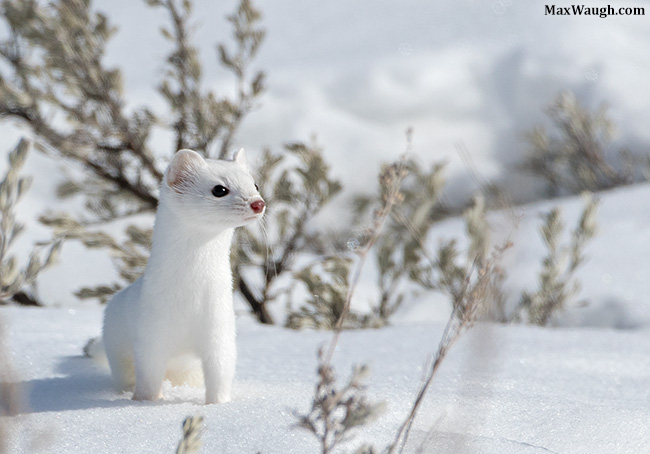 Small elusive critters like this are always a huge bonus.  And on this trip we finished up with an ermine, a marten (no photos of that) and otters.  So we did pretty well with the mustelids.

Following our brief ermine session, I spied a fox emerging in the foothills behind us.  On our drive back through the Lamar, one more fox was hunting on the hills above the road.  I suppose it was appropriate that we’d end this fox-heavy trip with a couple more of the orange-coated winter beauties.

We ended a great day with a farewell dinner at Mammoth.

Big thanks to my clients: Jack, Linda, Susanne and Wolfgang!  As always, my clients are a big part of what makes my work so enjoyable.  This group brought a great attitude and their A Game, and I can’t wait to see their photos from our adventure.

Thanks also to: the Yellowstone Super 8 for hosting us, and to Ron Peterson of the Gardiner Best Western for providing excellent guiding and snow coach services in the interior.

And finally, thanks to all of you who have been following my trip reports again, including those who stopped to say hello and introduce yourselves in the park.  I’ll see many of you in May!

If you are interested in joining me on a future winter Yellowstone tour, I am close to selling out the first winter tour next year, but may be adding a second.  Spots are also still available for my spring Yellowstone wildlife tours.  Check my tour page for more information about these trips!