Close Encounters of the Ursine Kind

I was inspired to write this blog post a day after seeing The Revenant, Alejandro Iñárritu’s film about the travails of 19th century outdoorsman Hugh Glass 1.  This was my most anticipated film of 2015 (though I had to wait until 2016 before it opened in Seattle), in part because of the incredible cinematography, but also because I love outdoor adventures. 2  Though it did not live up to my very lofty expectations, it was still a very good film, and pulled off a lot of what another recent outdoor survival film—the utterly dismal The Grey—failed to achieve in many respects.

Leading up to its release, The Revenant was making headlines mainly due to the harsh conditions the cast and crew endured throughout the shoot.  One particular rumor made the rounds after the first trailer debuted: that Leo was raped by a bear.  That, of course, was somewhat laughable, but the initial snippets of footage we saw of the bear attack looked frighteningly realistic.  And the scene holds up in the theater.  Though the bear is at least partially a product of digital manipulation and animation, it’s very well executed 3.  The attack is prolonged and brutal, and I never found myself distracted by poor special effects, so the tension in the scene was everything the filmmakers were hoping to achieve.

It got me to thinking about my own encounters and near run-ins with bears over the years.  Though I’ve been fortunate never to suffer anything close to the awful encounter depicted in the film, there have been a few tense moments during the course of my adventures.  Many of these I can laugh off now, but at the time they were at least a little unnerving, unexpected and sometimes just bizarre.

The one time I forgot the bear spray, you can guess what happened.  In 2005 Jenn and I started my traditional Mt. Washburn hike in Yellowstone early in the morning.  It was always my policy to be the first one up the mountain.  More potential for wildlife, more peaceful and a great way to avoid the July heat.  I just happened to leave my bear spray in the car on this particular hike, but I figured we were okay.  I’d never seen a bear on this trail before and we had wide open views, so I figured there shouldn’t be any surprises in store.

Soon after starting the hike, we encountered our first wildlife.  A large herd of elk grazed on the grassy slopes beneath the trail.  Their ears perked up when we rounded the bend, and as we continued up the trail they turned and ran back into the woods.  A pretty skittish bunch. 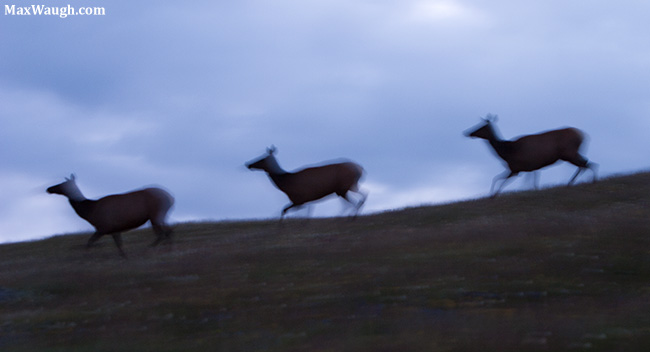 We kept going, and a short while later started to hear noises coming from the same tree line through which the elk had vanished.  Bleating echoed across the slopes of Washburn, and we quickly spotted some of the elk emerging from the far side of the trees on the run.  Behind them came a large, dark shape.  A grizzly bear.

The bear continued its pursuit and both predator and prey disappeared out of sight in the trees.  We quickened our pace again, hoping to get up toward the summit and out of sight.  We completed the hike without further incident (except for meeting a lone elk near the summit… it had the same idea as us and ran all the way up the mountain during its escape), but we kept thinking about what may have happened if the elk had not been around.  What would have been the next item on the bear’s breakfast menu???

Oops, Should Have Forgotten the Bear Spray

In 2008 I traveled to Utah to look for mountain lions.  I was invited down by a fellow photographer, Cody Hoagland, who had been seeing one on his family’s property.  The cat (and many other animals) were coming to a couple of natural springs on the property to slake its thirst, and they had a couple of tree stands set up nearby.  The perfect spot to get my first mountain lion photos.

On the first morning I clambered up into the tree and took my place near the springs.  My host chose to stay on the ground in a blind he had set up a bit further away.  It was still dark, and we settled in to wait.  I didn’t see anything the entire morning except for a couple of Clark’s nutcrackers.  Cody had a slightly more eventful morning.

While he was waiting in the hide, he heard a lot of noise coming from the treed hillside above.  Something was pawing its way through the underbrush, and there was a very good possibility that it was a bear.  Cody had photographed some very large black bears that had come to the spring (and some that even investigated him while he was in the tree stand), so he was already familiar with whatever may have been rustling around above.  Just to be safe, he undid the safety on his bear spray.

Eventually, the bear (or whatever it was) moved on and the remainder of the morning passed by quietly.  We returned to the car to head back to the city for our midday break.  Just as I buckled my seat belt, I gasped.  And gasped some more.  I suddenly couldn’t breathe, and was hacking up a storm.  Cody was too, but he was even worse off.  Turns out he had forgotten to reattach the safety latch on the bear spray canister.  It had just fired inside the car!

We fled.  Luckily the spray had been aimed at the door, so nobody got any spray on their face or their skin.  But we were feeling the effects for a good six hours afterward.  I finally knew first-hand why bear spray is so effective.  Luckily, our bout of misery didn’t ruin my trip.  That afternoon we returned to the springs, and the moment the sun went down the whole excursion paid off in a big way. 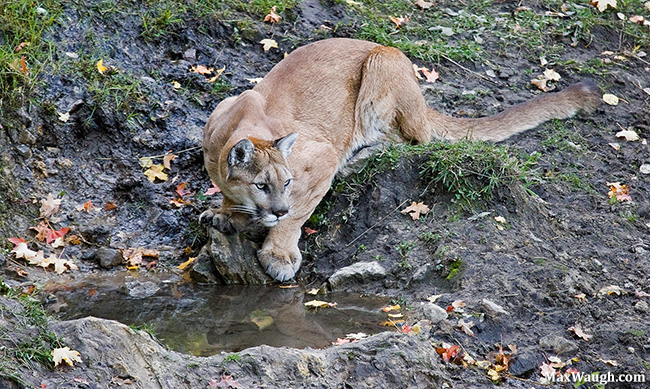 Be careful if you ever go searching for great gray owls in Yellowstone.  You may find a bear instead.  Several years ago I joined a group of friends on an owl hunt in the park.  The owls had been seen back in a series of interconnected meadows, but you never knew where an owl might show up on a given day.  So our group split up in order to cover more ground and improve our chances of finding a great gray.

An hour later, we gave up and reconvened back at our starting point, except someone was missing.  A short while later, our missing friend emerged from the woods, looking a bit shaken.  Apparently, while walking through the forest, he came across a huge grizzly boar.  He hit the deck before the bear could detect him and had to wait a half hour before it moved off (no, he didn’t have bear spray either).  I imagine it was somewhat similar to the scene in The Revenant, without the violent confrontation and conclusion!

Fast forward five years or so, and I was once again back in the woods looking for great gray owls with Zack Clothier.  This time we found the owl—there was a nest site we had visited several times already—but we got the bonus bear as well.

We were standing around chatting quietly that morning hoping the nesting owl’s mate might fly in for a feeding when Zack whispered, “bear!”  A black bear was standing 30 feet away, eyeing us. 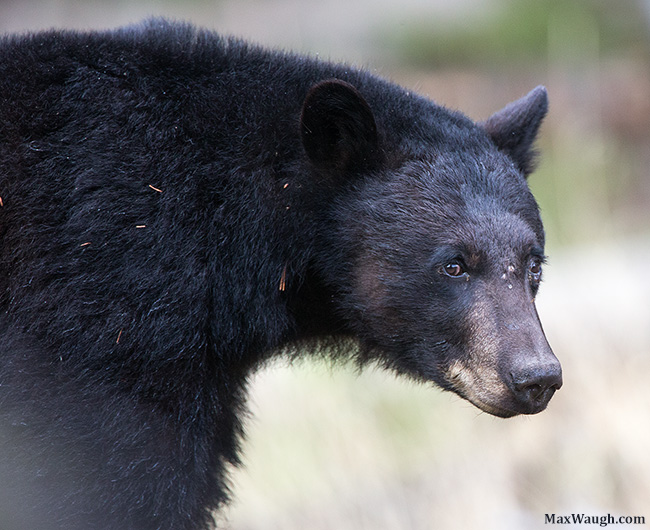 We remained calm, immediately starting to back off slowly while speaking to the bear in casual tones.  Though in hindsight, it may have been better to make more noise and try and scare it off (something that’s often done once bears are that close).  But we chose to make the bear feel more at ease as we stepped back.  At the same time I pulled out my bear spray and unlatched the safety, the first time I had ever been compelled to do so.  It’s because of surprise encounters like these that I always have my bear spray strapped on these days.

The biggest problem is that the bear didn’t do anything.  He just stood there, thinking.  Analyzing.  Deciding.  It’s impossible to know exactly what an animal is thinking in a given moment, but I’ve had a few cases when a predator has given me a look that put me on edge.  In this case, the bear simply needed time to sort out what we were and whether we were worth the trouble.

Fortunately, he moved on.  Unfortunately, he came back.  So we had to repeat the process and move out of his way before he disappeared back into the forest.  In hindsight, we probably woke him up while we were waiting on our owls, so it’s easy to write off the look he gave us as one that comes from a cranky, sleep-deprived bear.  But it didn’t make the moment any less tense.

By now, you may think I’ve escaped any potential bear attacks.  You’d be wrong.  In 2006 we were attacked by a bear… just not in the way you think.  Okay, maybe “attack” is the wrong term.  But he did throw a rock at us!

We were driving the Tower Road in Yellowstone.  Just past Rainy Lake (an area park regulars know well for being a bear hot spot), a big black bear lumbered out of the woods to the south.  He was busy searching for food, and worked his way up the hillside overlooking the road.  We slowed Jenn’s car so the folks on the passenger side could get a better look as the bear snuffled around under logs and boulders above us. 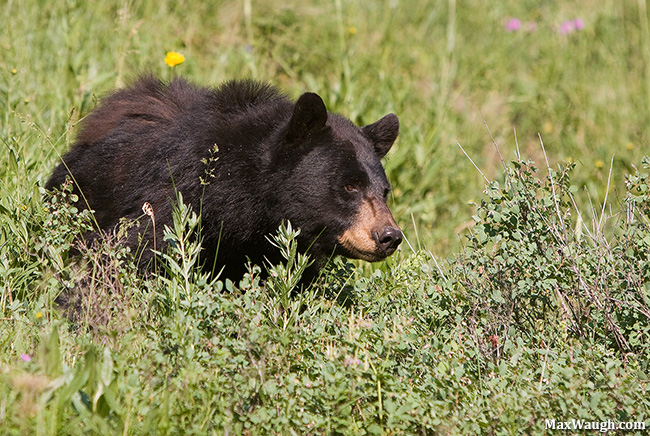 As we watched, the bear found a large, flat rock.  It dug its claws underneath the edge, and with nary a grunt, pried the boulder off the ground and flipped it aside.

The rock tumbled over the edge of the hill, traveling end over end.  It quickly picked up speed, cartwheeling on a path right toward the car.  After a couple bounces it disappeared out of our sight into the small ravine just below the road.  There was a pause (enough time for us to all cringe in anticipation).  Then…

The boulder had bounced back up and nailed the side of Jenn’s door.  And that’s when we learned that bears sometimes have more in their arsenal than just claws and teeth.  We dubbed him Rock Bear, and I was always somewhat wary when I saw him in the general area the following couple years.

By the way, I’ve begun my latest Yellowstone adventure!  I’ll be in the park the next two weeks exploring on my own and leading my latest photo tours.  Stay tuned to the blog for trip reports and new photos posted live from the park.