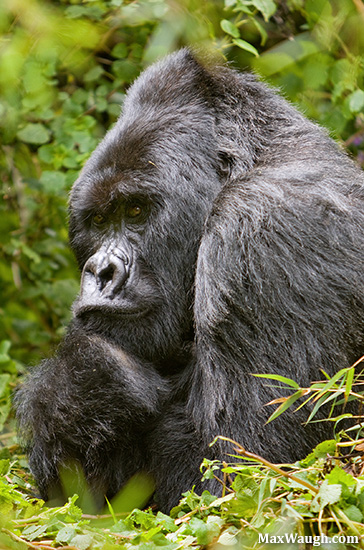 I was having flashbacks to my 2007 visit to Rwanda after reading a recent article about the mountain gorillas there.  For our first visit to Africa, we wanted to go all out, so we didn’t just schedule the popular northern safari circuit in Tanzania, we also decided to head to Rwanda for gorilla trekking.  It was well worth it.  Though the visits with the wild gorillas are highly regulated—you only get an hour with them after potentially trekking for as much as four hours—it’s an unforgettable experience.

Some day I’ll look back on this visit in more depth, and eventually I plan to upload the full gallery of images from our 2007 trip to the archive.  I’m still discovering new images from that trip, including this portrait of a silverback.

More importantly, I wanted to share the details of an article on National Geographic’s website, discussing what recently happened in Rwanda.  Apparently the gorillas are now recognizing and dismantling poachers’ snares!

“On Tuesday tracker John Ndayambaje spotted a trap very close to the Kuryama gorilla clan. He moved in to deactivate the snare, but a silverback named Vubu grunted, cautioning Ndayambaje to stay away, Vecellio said.

Suddenly two juveniles—Rwema, a male; and Dukore, a female; both about four years old—ran toward the trap.

As Ndayambaje and a few tourists watched, Rwema jumped on the bent tree branch and broke it, while Dukore freed the noose.

The pair then spied another snare nearby—one the tracker himself had missed—and raced for it. Joined by a third gorilla, a teenager named Tetero, Rwema and Dukore destroyed that trap as well.”

Though the snares are not set for gorillas (usually for other animals that provide more valuable bushmeat), gorillas do fall victim to snares.  During our trip we saw one male who was missing a hand he had lost in a snare.  And only recently, the family mentioned in the article lost one of their youngsters to a snare, which may have led to the dismantling described above.