Sometime soon I’ll get around to counting down my list of favorite Yellowstone photo subjects.  On that list will be the animal with the best scientific name ever conceived: Histrionicus histrionicus. 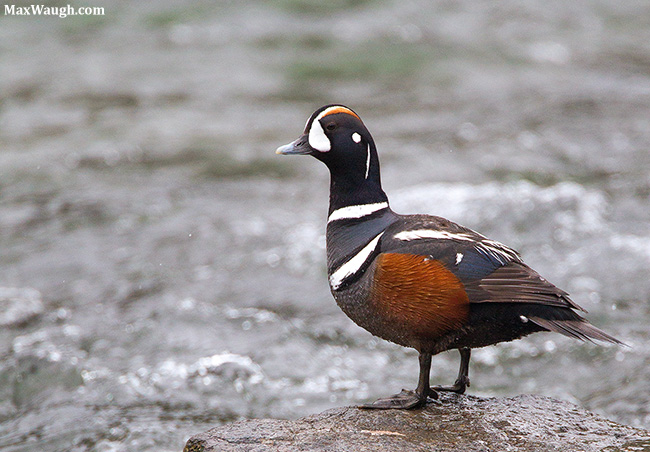 The harlequin duck does a good job living up to both of its names.  These colorful aquatic clowns can put on quite a show when they get moving.  They’re feathered daredevils, surfing rapids and diving through whitewater in search of food.  They’re spunky, with males chasing after rivals to protect their turf and their females. 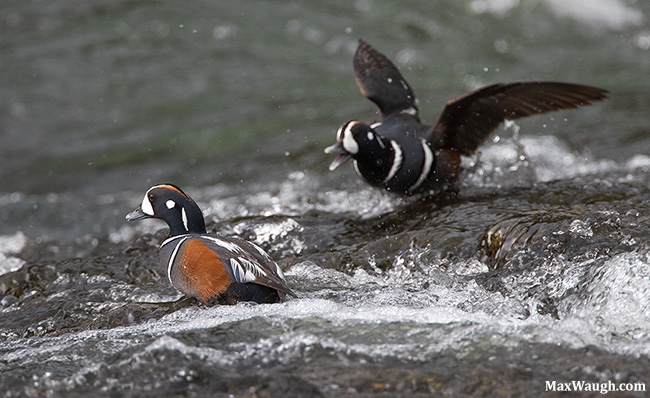 I love photographing harlequins in Yellowstone—typically at LeHardy Rapids in spring—because they present so many different photo possibilities.  The classic shot at LeHardy that many photographers strive for is the long exposure blur, a technique used to blur the rushing water around the birds.  It took me several visits to the rapids before I finally landed a couple shots I was really happy with.  Early results were mixed.  For a while this was the best blur shot I could come up with. 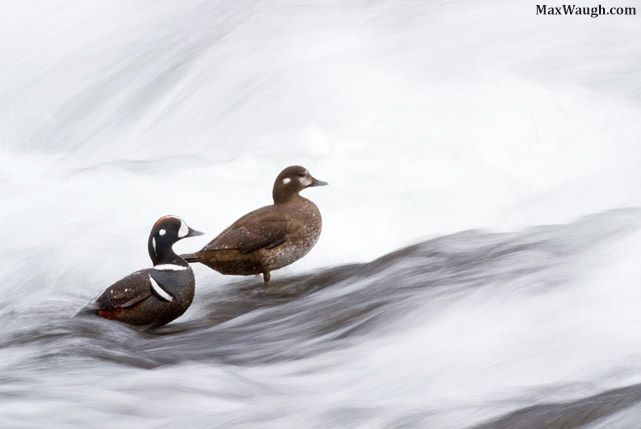 Okay, but not sharp enough, and not enough definition in the water.

Then in mid-June of 2012, I returned to LeHardy with a client and was surprised to find two drakes perched on the rocks in the Yellowstone River.  This was much later than usual… by June the harlequins have normally departed and continued with their spring migration to the Pacific coast.  But we were triply lucky.  Not only did we have two lingering ducks, but they were both colorful males… and we had perfect conditions for photography.  We actually arrived in a heavy snowstorm (not a surprise in June in Yellowstone).  Once that cleared up, it was still gray and overcast, and the late spring snowmelt made for one angry river.  All perfect for working on motion blurs!  It’s not surprising that this ended up being my best-ever session at the rapids. 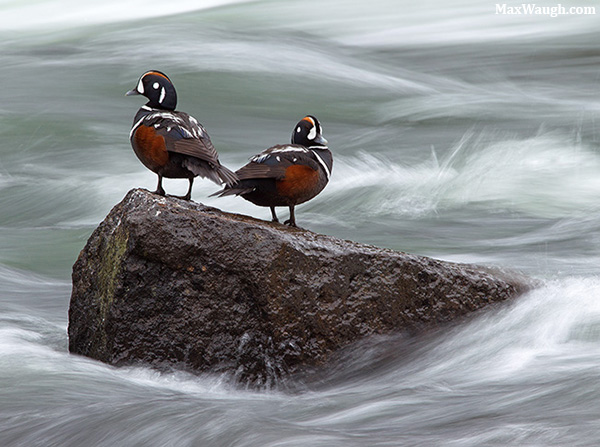 The challenge with capturing such smooth blurred images with birds as a centerpiece is that the ducks themselves have to stay still.  When you’re shooting at 1/15th or even 1/10th of a second, there are a lot of missed shots due to the constantly-shifting birds.  So it’s really special when they do stay still just long enough for everything to come together just right. 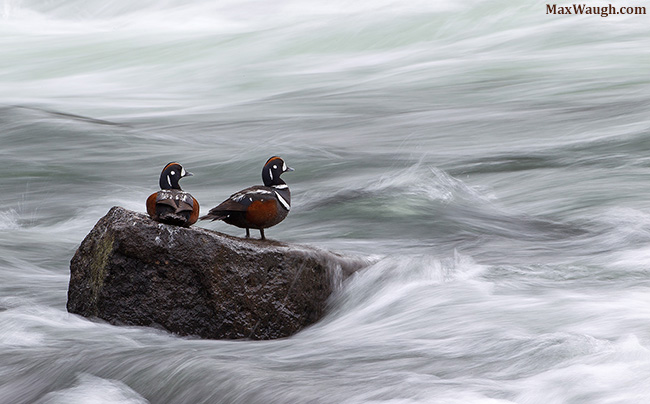 But it’s not just about photographing harlequins sitting around.  As I said, they have character beyond their outrageous plumage.  They’ll nap on the rocks for a while, but eventually they’ll get moving.  The male often follows the female into the water.  He doesn’t want to let her out of his sight. 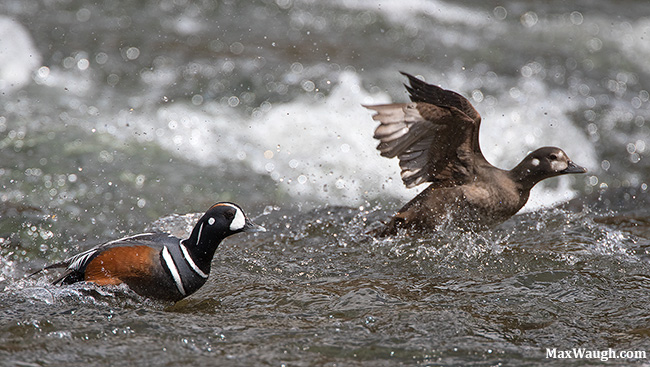 Harlequins are excellent divers, which comes in handy when they swim underwater looking for tasty insects and crustaceans. 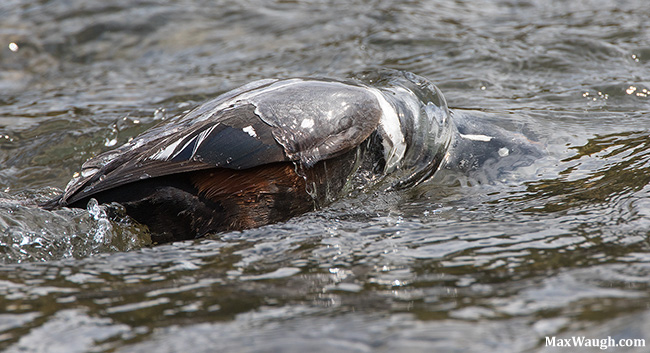 Sometimes the ducks will decide to head upriver, at which point they’ll take flight.  You’ve gotta be ready!  The raging rapids make for a fantastic surrounding environment. 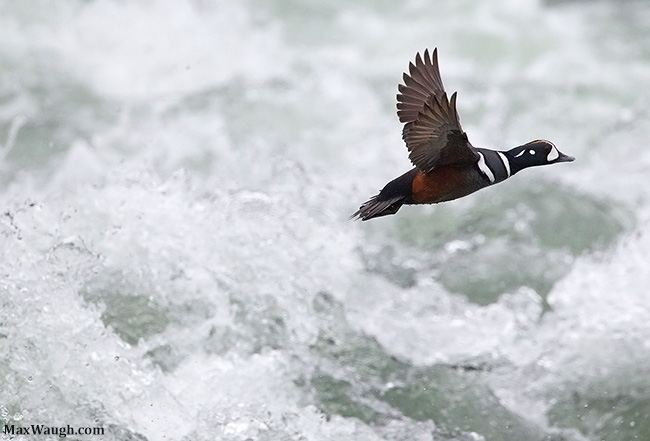 Inevitably, if the ducks do fly upriver you can expect them to reappear as the current carries them back downstream.  Eventually you can spot a couple of bobbing heads amidst the swirling rapids. 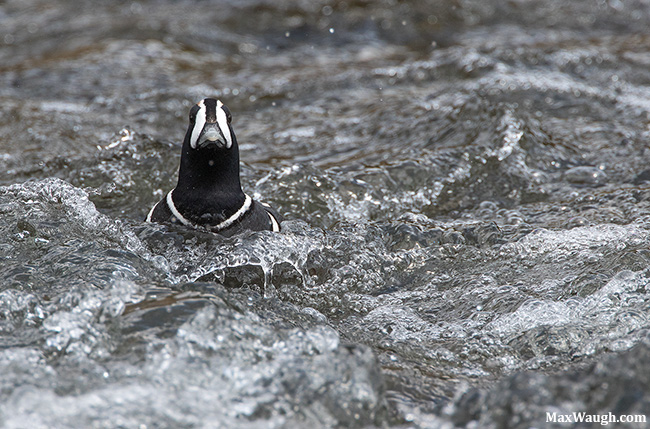 When it’s time to return to their perch, they’ll often have to cut across the rapids.  They’re essentially flying low across the surface, but it looks like they’re surfing. 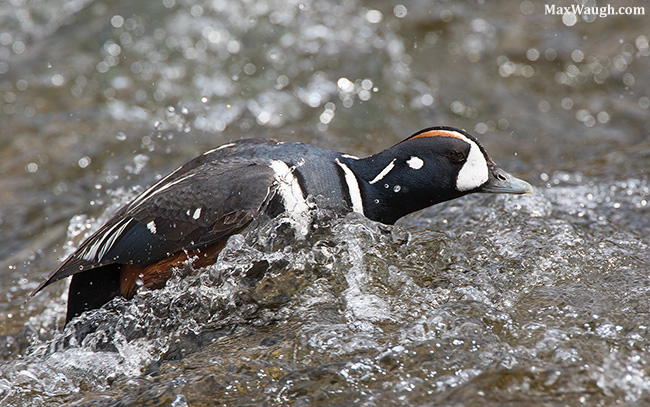 Next time you have a chance to photograph (or just watch) a harlequin duck, don’t miss it.  They really put on a show. 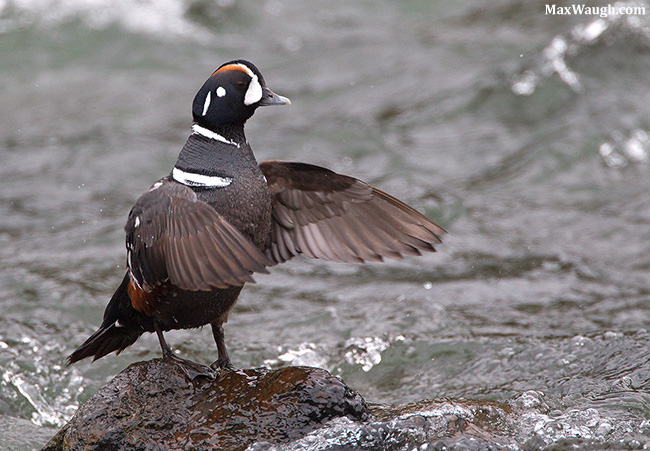 Many of these images are not yet in the photo archive, since I still have a lengthy backlog from past trips.  However, you can do a keyword search for “harlequin duck” or your other favorite species to see what other photos may be in the archive.  And remember, you may order prints of nearly any image on the site!

By the way, I’m heading back to Yellowstone soon.  Stay tuned for spring trip reports posted live from the park right here in the blog.