It was the ninth anniversary of my Best Day Ever in the park (something I’ll write about here some day).  So naturally it ended up being one of the least eventful Yellowstone days I’ve ever had.

First, it should be noted that I’m running on fumes right now.  I’ve really stretched myself thin with an insane travel schedule (I know, boo hoo).  A week at home is a luxury these days, and I drove over on Wednesday from Seattle after only about four days to unpack and re-pack following my Chile trip.  So it’s a nice thought that my mother, aunt and their friends—for whom I’m playing tour guide these first couple days—don’t normally get going until later in the morning.

The only problem is that I still awoke at 4:30am.  Still on Chile time, I guess.  Even worse, we didn’t actually leave until ten.  So don’t be surprised to hear that we did not see much on Day One.  The weather was pretty crappy, but don’t get me wrong.  There was activity in the park.  Grizzly bear at Soda Butte, wolves on the carcass at Junction Butte, multiple black bears together at Hellroaring, a great gray owl at Cascade Meadows…  It all just happened before I could pry my crew away from the warmth and comfort of the cabin.

We saw a couple of brief black bears, and distant/hidden great horned owlets in a couple spots, but I didn’t touch my camera gear once.  On the plus side, the driving rain forced us home earlier than normal.  Which made me hope for, I don’t know… six hours of sleep?

I didn’t quite get my six hours, but I felt much better.  And we even got out of the house before six o’clock.

Exploring the park today, I was reminded all about the Yellowstone classroom.  There are small lessons to be learned during these adventures, like where to look for certain animals you’ve seen in the past.  For example, I was able to show my guests the ruffed grouse that’s been drumming on the same log every spring the last few years.  Thumping away in the same spot as always.

Many of us have learned that when Dunraven normally opens for the season on Memorial Day Friday, they finally let folks through at 8am.  So today, even though the pass was opening a week early, we were there right at 8am.  That allowed my aunt to make the first official Dunraven bear sighting of the spring (by non-official personnel, at least), a male black bear that was running along the hillside, rubbing trees, and ultimately crossing the road in front of the small crowd that formed. 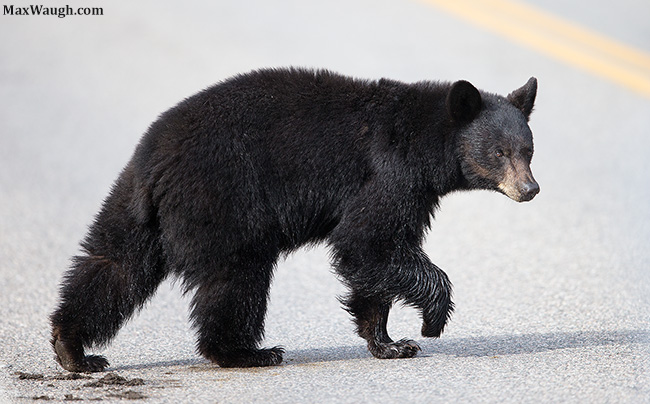 Park management is starting to learn that they need to tackle the cultural gap between us and the Far East.  Most, though not all, of the toilets now have stickers showing people how to properly poop in the west.

The ospreys in Lamar Canyon have learned a thing or two about real estate.  By my count, they’ve built at least three failed nests in the canyon the last few years.  Two were on dead trees, which promptly collapsed.  A third was on top of a crane being used during the bridge construction.  This year, they’ve actually picked a live tree (though the top is broken off).  It looks like it’s in a solid spot, and also happens to be the most photogenic nest they’ve built since they moved into the canyon.  I’m sure they still have the movers on speed dial, just in case.

I learned a while ago not to take less common migrating birds for granted.  Down at Mary Bay, we had a loon close to shore.  I walked down and snapped a few photos, though not “close-ups” by any means, of what is a rare sight around here.  Further along in Sedge Bay, a small cluster of Western grebes floated near the road.  An underrated and striking bird, especially with those red eyes. 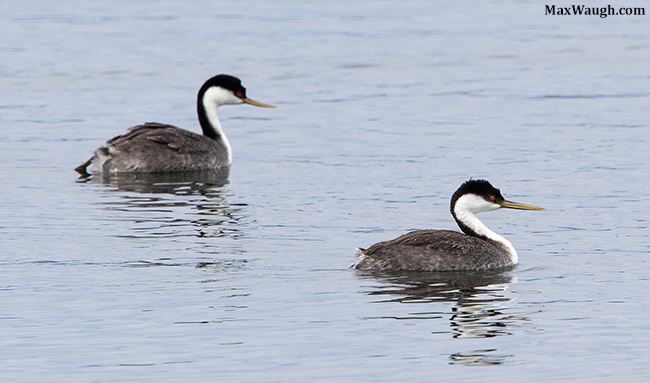 The park rangers have learned a few things too.  Returning to the northern range at midday, we were caught in traffic at the Yellowstone River Bridge.  Rangers had stopped all traffic, and people were lining a hill on the other side, as my favorite bear family from last year made its way across.  No repeats of the infamous “Rosie Hunting Tourists to Feed Her Starving Cubs” crossing of a few years ago. 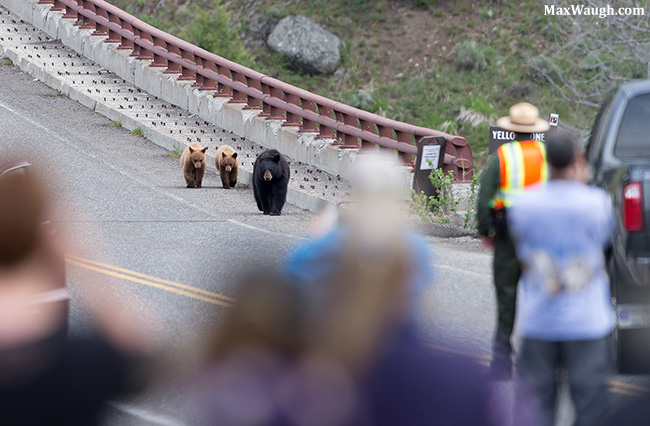 So it seems like everyone’s learning their lesson this spring!  Okay, maybe not everyone.  That’s a little optimistic.  But perhaps even those overseas visitors standing in the fragile thermal area at Mammoth beyond the “No Entry” sign that was right in front of them will learn something too.  Let’s just hope it doesn’t take a fall through the crust or a viral YouTube video to do it.