I said goodbye to my mom on Saturday, but said hello to a number of other mothers, namely the black sow with cinnamon yearlings, Quad Mom (and her two new cubs) and a black sow with a single cub at Phantom Lake.

My mother’s group left the park today, so I was on my own.  I woke up before the alarm, so I was on the road by a respectable five o’clock.  I was tempted to try and get back to sleep, since some heavy loads of rain had hit Silver Gate overnight and I was unsure about the weather to come.  Ultimately I felt it would be best to take advantage of my relatively awake state.

Sure enough, it was damp throughout the day.  The morning drive was fairly uneventful until I double back on the Tower Road at one point and had the black + two cinnamon family in the meadow next to Rainy Lake.  The day before, Rosie had been down with her two new cubs, so it appears the area is taking reservations from different bear families this week.

Yearling cubs are pretty boring, by the way.  That’s right, I said it.  They’re nowhere near as playful, curious or adventurous as cubs of the year.  They primarily follow mom’s lead and eat grass.

A year ago?  Climbing trees with abandon.  This year?  Eh, too much effort. 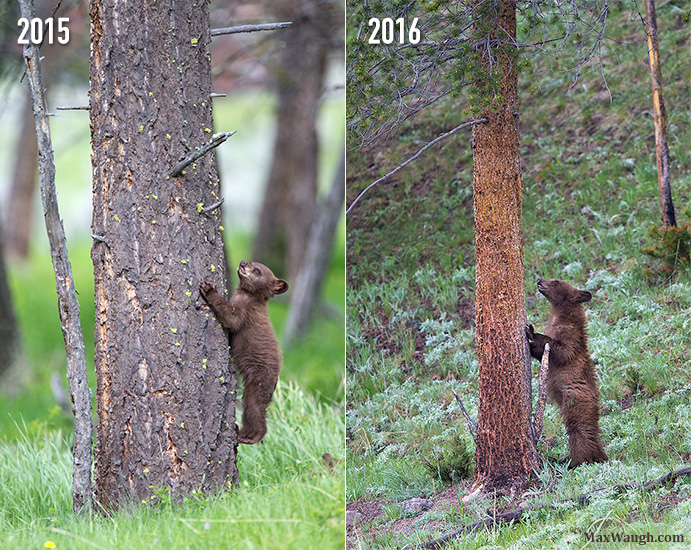 Nevertheless, it is a treat to see this family in their little remaining time together.  They eventually left the meadow, passed Rainy Lake (where a pair of Canada geese with their own brood swam) and climbed the hill out of sight.

I was unsure where to proceed for the rest of the day.  Word had come in that Quad Mom had been seen in Swan Lake Flat Friday, but I thought it was perhaps a bit late to go all the way over and check that out.  Plus, I wanted to revisit Hayden and the Lake area, in case action had picked up there… and admittedly to check a few more spots for great gray owls, which a client is requesting.

There really hasn’t been much more activity on the east side lately.  Though I did see one pair of harlequins at LeHardy this time (up from zero the day before).  Lake Butte Overlook seemed to be one of the few dry and even sunny spots left in the park while I was up there.  But looking out over the water, I could see a major storm rolling in from the south.  An ominous wave of blackness crept toward me, and ripples of water were being kicked up in advance of the onslaught, as though the lake water was trying to flee the rain. 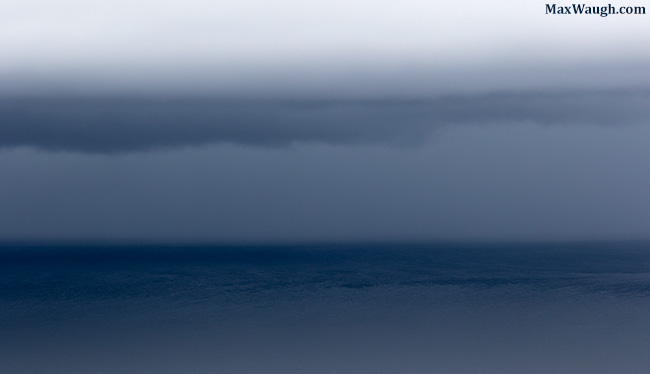 A random sandhill crane zoomed past the butte, probably not quite in control in the heavy winds.  A bald eagle circled over and was quickly swept to the east as well.  That was my cue to get the hell out of there!

It would have been pointless to try and outrun the storm, so I actually went into it, driving south to Bridge Bay and Gull Point Drive.  By the time I got there, the temperature had plummeted and I was suddenly in the midst of a heavy gusting snowfall.  Ah, spring in Yellowstone…

I drove along Gull Point until I reached the picnic area, where I initially planned to take a nap.  However, when I pulled in the wind had disappeared, and I was surrounded by a lovely bit of forest being sprinkled with big flakes.  So I went for a bit of a walk.  Nobody else was around, save for a lone red squirrel.  It was incredible calm and peaceful. 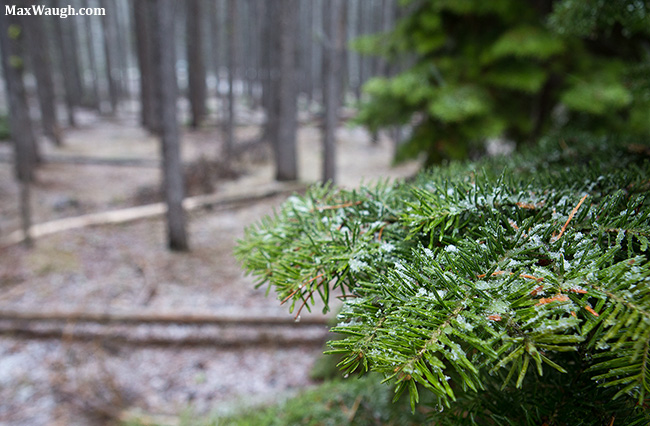 Down by the lake shore, I spied the only real signs of activity, as swallows were dipping and darting along the surface of the water.  They seemed to be enjoying the snow nearly as much as me. Telescopic fishing rods are a special type of rod that collapsed into itself, saving a lot of space in the process. That’s why they are so popular among anglers on the go or people who like to fish during their outdoor trips. Some say that, because of the collapsible design, these types of rods are not as reliable as 1, 2, or 3-pieces poles. While there is some truth behind this fact, the new materials and technologies are making telescopic rods more than solid, especially for fishing in stranded ponds or lakes. Here we bring you some of the best telescopic fishing rods on the market! Visit FishReeler.com for more info!. 😉

At that point it was time to return north, lest the storm got any worse.  I was still hemming and hawing about whether to go check on the purported Quad Mom sighting, but Mother Nature and the park service made the decision for me.  Dunraven Pass was closed.

I arrived at Swan Lake Flat and beheld a monstrous line of traffic and parked vehicles.  Well, I guess it’s true… she must be back!  Eventually I tucked into a tight parking spot and enjoyed the show.  Nothing too spectacular, but the bear and her two cubs of the year were within decent range of the road as they foraged. 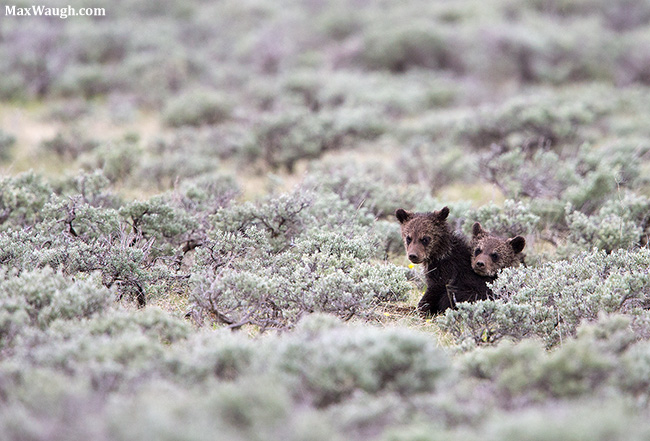 I stuck around for two hours or so, until the lousy weather caught up to me and drove everyone back to their cars.  On the way home I passed the last mother of the day, with her lone black yearling (possibly down from two a year ago, if it’s the same sow who hung out at Phantom Lake last spring).  Though the weather was surprisingly moderate in Silver Gate, the power was out when I arrived.  Thankfully, it came back in time for me to type up my report.

I have very little in the way of a plan while I’m here in Yellowstone.  My winter and spring travels have been exhausting, but also quite fulfilling, so I look at this spring visit as a bit of a bonus.  Anything cool and exciting that comes out of it, photo-wise, is a special treat, and I’m not putting any pressure on myself to come away with some amazing photos.

So this morning, though fairly quiet in terms of wildlife, was still relaxed and fun.  Much of it was spent in the northeast corner, which was devoid of traffic.  I assumed most folks were stalking Quad Mom again.  I checked the Tower Road a couple times, both hoping to see Rosie and her new offspring, and to see if I could finally land a clear shot of a peregrine at the Calcite Springs nest.  Neither was in the offing, so instead I took some time to photograph my favorite ruffed grouse, drumming as always on his traditional perch in the woods. 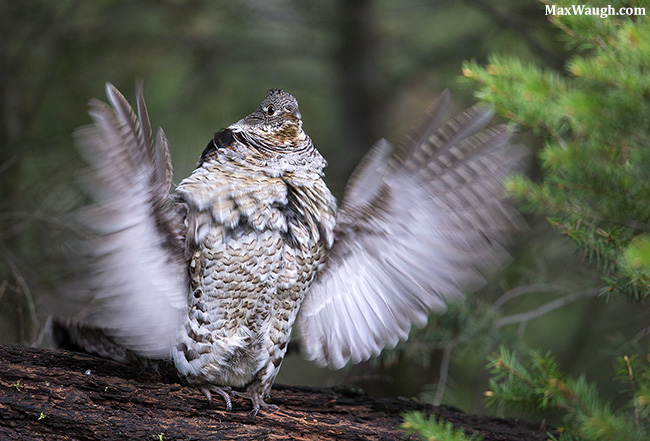 Soon after, I passed a rotund black bear across from Rainy Lake, and then headed back into the Lamar.  At the Buffalo Ranch, a lone black wolf crossed the river a ways out before climbing the hill to investigate a bison carcass.

I had to return to Silver Gate for lunch and to take care of some business.  It was time to drop off my 2017 Yellowstone-themed calendars at the Stop the Car Trading Post, and I had an immediate sale when KC and Kim from Iowa stopped in and bought one.  Then a past client, Pat, walked in and bought another one.  Thanks guys!   Oh, and of course I couldn’t leave before obtaining some sort of ice cream concoction from the Stop the Car…

Pat and I went to check on a former owl spot I’d been hoping to investigate, but didn’t find anything of note as hail started to pelt us.  After that, I ended up in the Lamar Valley, zigzagging back and forth in a futile attempt to get a good view of some wolves traveling the high hills north of the road.  There was still a bit of daylight left to get my first quick peek at Rosie’s cubs (they were high above the road) and snap a few photos of non-shivering/non-portable bison calves. 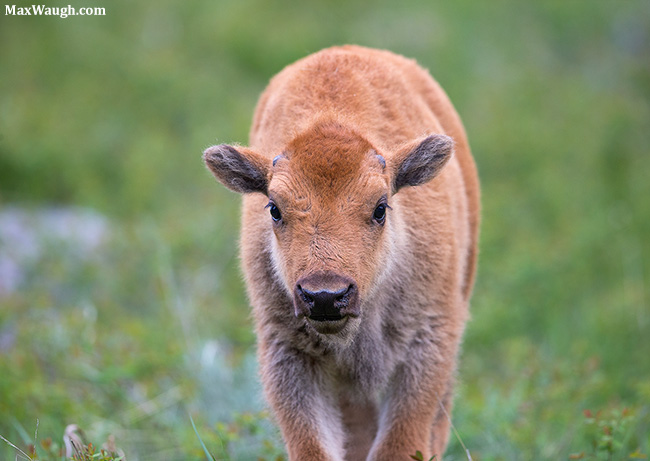 I finished the drive back with a stop to catch a massive river crossing. 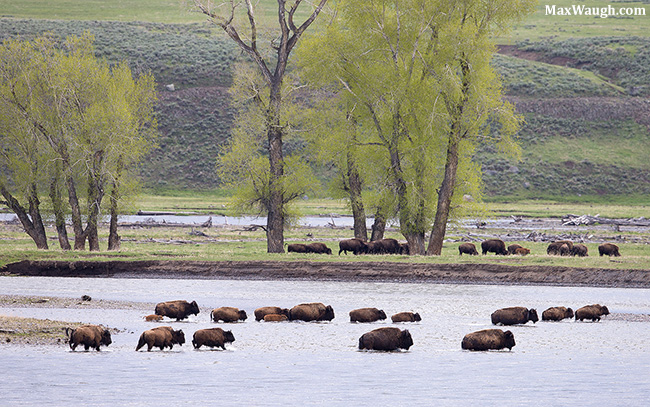