I opened the blinds to discover a couple inches of fresh snow coating everything.  It was lovely.

It was also quiet.  With the exception of a lone wolf wandering near the Lamar River (same place I saw it Sunday), everything seemed rather peaceful and calm under the dusting of new snow.  It’s as if someone pulled the physical manifestation of “Shhhhhhhh” over the northern range and muffled everything.

I didn’t stick around too long, as I had to make it south to Canyon, and Dunraven Pass remained closed.  On the way west, a black bear with yearling cub were wandering down the middle of the road.  I could only snap a quick shot through the windshield.  They walked so close to my window that I actually had too much lens at 70mm. 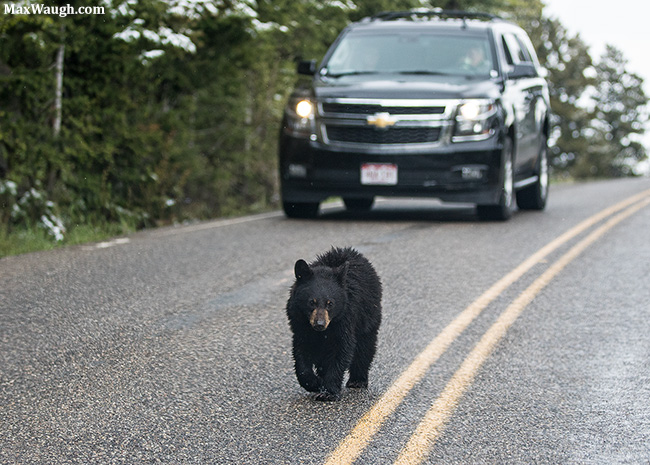 Swan Lake Flat was virtually deserted, which means Quad Mom is staying away for now.  The roads remained largely devoid of traffic all the way to Canyon.  After delivering some copies of the new 2017 Yellowstone Wolves calendar to Steve Hinch (with whom I’m collaborating on the calendar), it was time to check out Hayden Valley.

As with the last couple visits, there was very little going on there.  I did spy some Eared grebes and Trumpeter swans in the river, but didn’t stop until I reached the Nez Perce Ford picnic area.

This picnic area’s a little underrated, and also slightly bizarre.  It’s often virtually deserted, and you have some nice quiet picnic spots in the woods along a small channel near the river… but then at the end it gets a little crazy.  The drive ends in a wide gravel lot, where tables have been scattered haphazardly.  It’s like the picnic table delivery truck decided to do a few donuts in the parking lot, slingshotting outdoor furniture out the back at random intervals.  The tables have settled just about anywhere… I’ve even seen them submerged in the river before.

Suffice to say, I ate my lunch in the car.  Hey, it was cold.

I continued my drive south and east all the way to Lake Butte Overlook, where I stopped for a nap.  Two days in a row with a midday nap!  I’ve forgotten how nice that can be.

After waking, it was back down the hill.  Just past Indian Pond, I finally stopped for some wildlife.  A herd of elk had gathered in a meadow, and suddenly spooked.  They started running toward and then past where I was positioned. 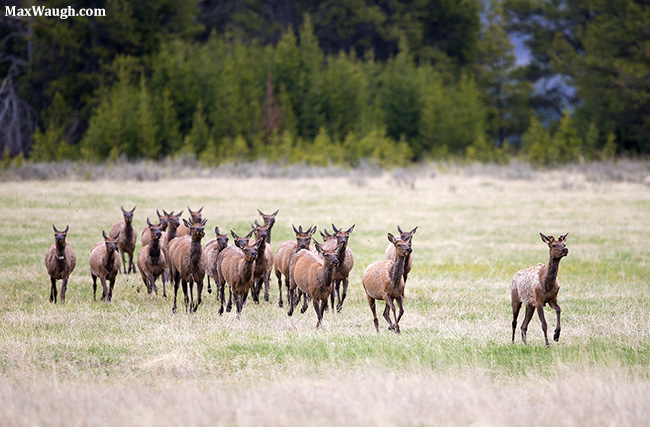 I’d kinda hoped a wolf or grizzly had scared them, but I also knew the Storm Point Trail came out at the point where they had been staring.  Sure enough, thirty seconds later two hikers emerged.

An ice cream cone was necessary for the long drive back north.  The Fishing Bridge store was packed.  I suspect most people were hiding from the elements.  The crowds didn’t abate as I hit the road north either.  Where did all these people come from all of a sudden?  Maybe the person in charge of releasing the animals from their cages accidentally released the summer tourists instead.

Between Norris and Mammoth, I found myself in the middle of a steady 20 car line of northbound travelers.  I prayed there would be no bison on the road.  It’s a terrible stretch for bison jams, and let’s face it: the odds of ten consecutive Yellowstone drivers knowing how to successfully navigate a bison jam are about as good as me winning $1000 on a scratch ticket.

Thankfully, no bison, and thus, no delays.  The weather remained pretty crummy throughout the drive.  Hail, wind, a bit of freezing rain… I was glad when it finally lightened up as I turned east from Mammoth.  I decided that it would be a good opportunity to finally get out of the car and walk for a bit, so I went down to the Hellroaring Trailhead lot.

This is where long-eared owls had been seen last year, and where I found pygmy owls.  I’ve also seen a marten and a weasel, and of course, you have the pikas… so it’s definitely a good place for small stuff.

I ventured through the woods and over the hills.  It didn’t take long to hear pikas calling.  A marmot scrambled up the rock pile.  A couple of blue grouse nearly gave me a heart attack when I flushed them from the sage.  I forgave the one that chose a nice photogenic perch in a nearby tree.  A third grouse picked at ground cover a hundred yards away. 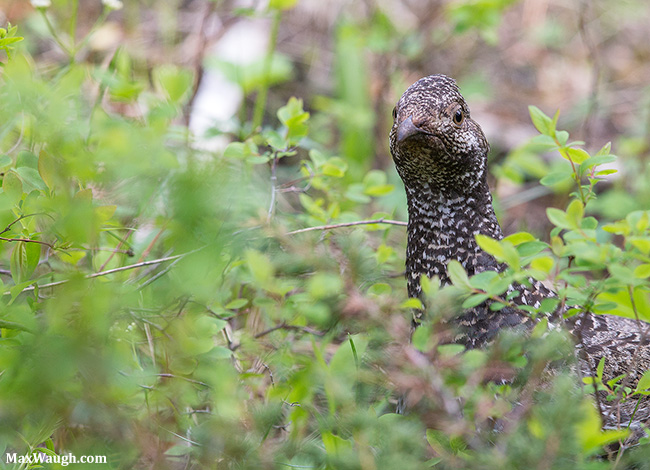 A vole ran under nearby deadfall, and I got a distant view of a male Williamson’s sapsucker courting a female, flashing his red throat patch and yellow belly at her.  Very cool behavior to see, even if it was slightly too far for photos.  So much good action from the smaller critters… it was a good idea coming down there, for sure.

By the end of the hike, and after my umpteenth small animal sighting, It’s a Small World started playing on a loop in my head.  On second thought, maybe coming to Hellroaring wasn’t such a good idea after all. 1

My drive home led me through a couple of bear jams as well as some bison herds settling down to rest in the waning afternoon sunshine(!) that had miraculously appeared.

Another quiet morning in the Lamar.  Lots of wolf chatter on the radio, but nothing to indicate I was missing something closer than scoping distance.  I made the northeast drive back and forth a couple times, as it took a while for things to get going.

Finally, by nine o’clock Rosie had appeared, and she finally gave the late May crowd a brief glimpse of her little ones.  The twins spent a fair amount of time climbing trees as momma bear grazed close to the road (we were under ranger supervision the whole time).  Unfortunately, they only chose to climb the worst trees imaginable.  All of the open stumps or trunks with unobstructed views were ignored.  So there were very few clear shots to be had… usually only when they were in transit to their next semi-hidden climbing spot. 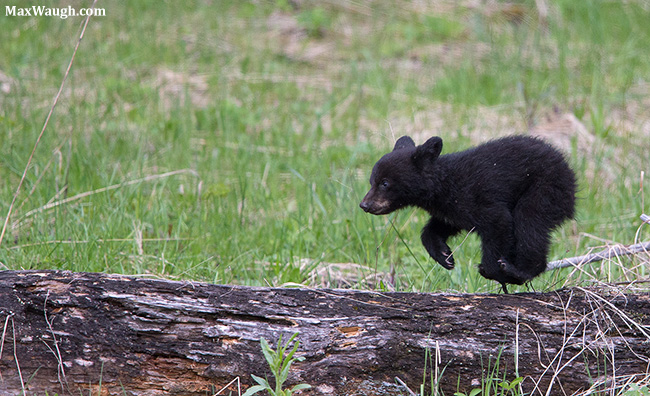 I had to make my way toward Mammoth for a lunch appointment, but there was time to dally a bit at Floating Island Lake.  Floating Island is pretty underrated, at least in spring time.  There’s a ton of bird activity, even if you don’t have the occasional black bear or moose that stops by.  The only problem is that it’s just slightly too far away for photography.

Still, in spring you get all sorts of avian visitors.  Today, we were treated to an uncommon sighting, as five American avocets decided to stop at the lake for the day.  There were also Eared grebes, Ruddy ducks, plenty of cantankerous coots, and a few Canada geese honking and flapping back and forth. 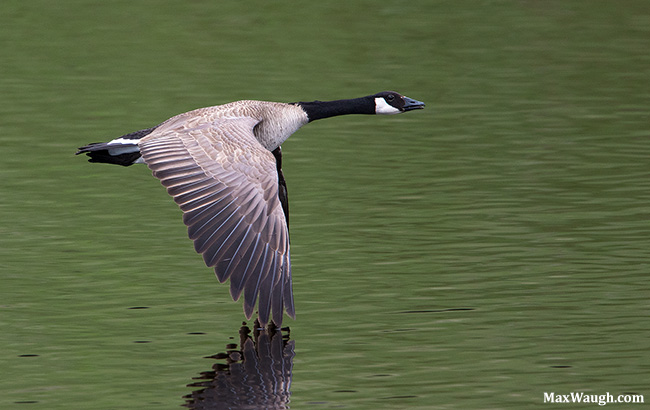 My afternoon was fairly quiet, in part due to the fact that I had to return home quickly with groceries.  It was nice to have the sun out for a change though!  I stopped to photograph a Western meadowlark in the Lamar, sunning itself and singing in the afternoon warmth.

Something else I noticed today was the sudden appearance of Uinta ground squirrels.  They’ve largely been absent, but today, with the sun out, they’ve suddenly sprouted up everywhere.  Coincidence?  Who knows, maybe, like the tomato, the Uinta is secretly a fruit.  I saw lots of ripe squirrels on top of sagebrush today, waiting to be picked (by hawks and badgers, presumably).