I got going about a half hour late.  Oops.  I didn’t think it was that big a deal, with the wet snow and overcast conditions outside.  It sure seemed like it would be wet down in the park, which proved to be the case.

At the end of the road, a turkey waited for me. 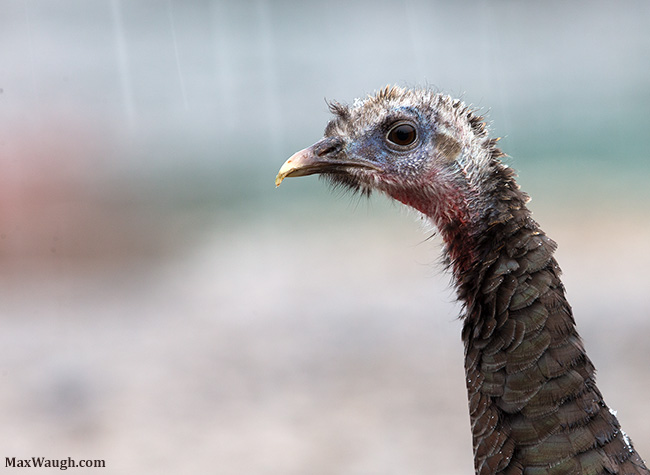 Hmm… turkeys are fairly uncommon around here (though we have had a few hanging out in Silver Gate the last few years).  I hoped like heck it was a sign that I’d see all sorts of rarities during the day.  Alas, all the pygmy owls I spied transformed into robins, the porcupines in the brush were simply juncos flitting about, and the wolverines were humps of bison in the sage.

When it came to the battle of “rain mixed with snow,” we as photographers were losing.  It remained on the Cool & Damp side rather the Cold & Crisp side, which made for a dreary morning.  I honestly don’t mind snow, but rain is no fun for photography.  Sometimes it seems the wildlife stays in a bit longer too.

I saw very little on my drive into the valley, though I did come across a couple of severely limping bison in a short stretch.  If there’s a bad time for a bison to come up lame, it’s when some of the Mollies Pack is in the neighborhood 1!

By the time I was reaching Roosevelt I remembered they had re-opened Dunraven Pass the previous afternoon.  Why I went up that pass, I don’t know.  “Dunraven’s open!  Gotta go!”  It was like being trapped in the gravitational pull of a black hole.  Or perhaps being sucked down a toilet is more like it.  After all, Hayden Valley’s been pretty crappy for sightings this week.

I couldn’t resist though.  I told myself it was the pull of a minute chance of seeing a Wapiti Pack wolf, or the draw of finding a Great gray owl in the many great places down south.  In reality, it was probably just the attraction of the F’Real milkshake machine in the Canyon gas station.

Hayden Valley was quiet, of course.  More cold rain fell.  Even the trio of pelicans, the most interesting wildlife I spotted, were huddled tightly together, with their heads tucked under their wings.  They didn’t exactly seem to be enjoying this fine spring weather we’re having.

I returned to my GGO hot spot from last fall and resumed the search for owls.  The forest echoed with the cawing of ravens, the whooping cry of snipes circling overhead, the chittering of alarmed squirrels, the squelching of my feet in the very wet ground and the occasional call of “Hey Bear!”  Unfortunately, what I was searching for was a nearly-silent ghost that blends into the gray of pine trunks incredibly well.  With each tree sporting a dozen potential perches in the form of broken branches, there were thousands of places to look.

It didn’t work out, but it was a nice walk anyway.  The most interesting sighting was a pair of Swainson’s hawks back in a meadow, the second time in a row I’ve seen one here.

Based on the constant rain and dearth of sightings, it seemed like a good day to head back home a bit early to get some work done, even if “work” first consisted of taking a long nap in front of the fireplace.  On the way back over Dunraven, I had one more stop to make.  I hoped to check the peregrine falcon nest at Calcite Springs (again), but instead found that I could barely squeeze into the pullout due to a black bear with cubs stationed directly across the road.  The sow was grazing out in the open, while the cubs were up playing near the base of a tree when I arrived.  I couldn’t tell if it was Rosie—there are two black sows with cubs in the area, supposedly—but I was able to snap a couple distant shots of the little ones before they climbed up the tree and settled down to nap in the soft pine needles. 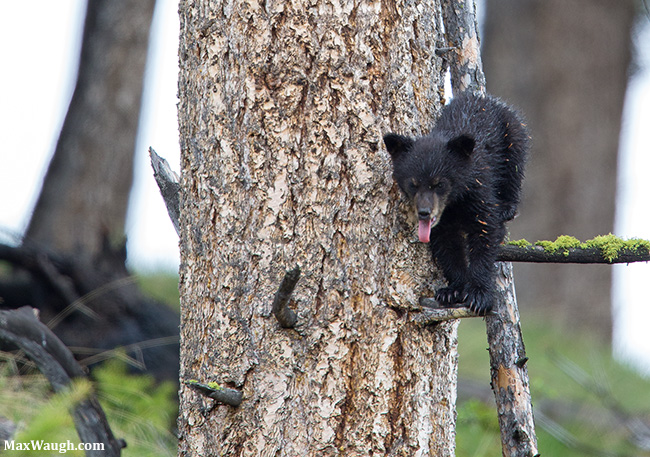 Afterward, it was a straight shot home, where I did get my nap, and woke up to blue skies peeking through the tops of the trees in Silver Gate.  The temptation to race back out into Yellowstone was strong, but I did have to get work done.  I still managed some wildlife sightings, as a pair of bison walked by the window on the way to our meadow.  And then the rain returned, so it’s probably good that I stayed in!

It was a peaceful morning in the northern range.  I drove at a leisurely pace, not seeing too much (there were wolves way out in the flats of the Lamar… too far for photos again).  In Little America, a pronghorn buck lounged right next to the road, so I pulled over and shot some portraits out the window.  After I was finished, I turned around and looked out the driver’s side window…

And there was a pronghorn fawn, standing all alone staring at me in the middle of an open meadow.

It was my first fawn of the year.  Though it would’ve been really nice getting a photo of it posing for me, the moment I brought my lens about to bear it took off.  That’s when I saw mom coming from the other direction.  Soon the two met, the fawn nursed a bit and then they trotted off into the sage.

My further adventures westward yielded little.  I just missed a fox at Elk Creek, but that was about it.  The bears were staying indoors this morning.  Back in Little America, I stopped to investigate what appeared to be freshly dug holes (badger?), which didn’t yield anything.  But then I heard a familiar sound.

It was the best singer in all of Yellowstone, the Sage thrasher.  If you’ve never heard this bird’s song, it’s very long, varied and intricate.  Full of chirps and whistles and even low guttural barks.  It had been several years since I had one in photo range, and I had long hoped to get better images.  Maybe today I did. 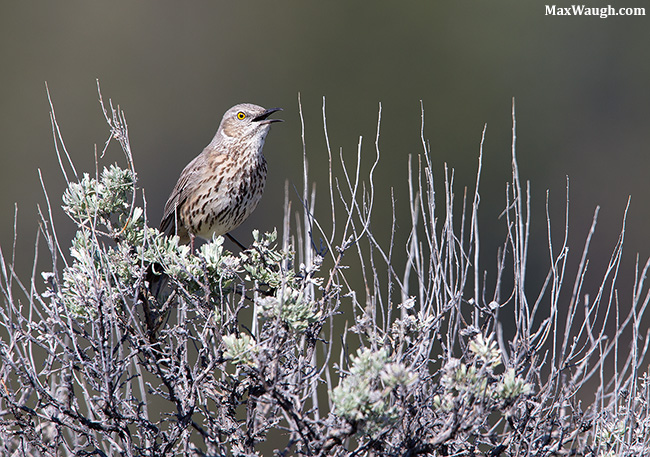 Afterward, I headed to Trout and Buck Lakes, my first visit to this former otter hot spot this season.  They never did show up last summer, but it’s always worth checking in May, as they sometimes do arrive a bit early at either lake.  No otters today though, and no signs of scat.  There was a fleeting muskrat sighting, and loads of Eared grebes on the lake.  I counted over 40, which is probably the most I’ve seen together in the park.  They were shy, as always, so there was no chance for close photos.

After the hike, I had a quick lunch at the Soda Butte Creek Picnic Area and then I returned to Silver Gate to make sure the Stop the Car Trading Post had enough Moose Tracks ice cream for me.  Then I went home and napped.

A bit too long, perhaps.  I woke at 3, and hopped online, only to see that my friend and past tour client Linda had spent the last five hours with two great gray owls!  I rushed to gather everything and hit the road.  It was a long haul to get where they had been seen, but I’ve had a lot of people requesting owls lately, so I wanted to at least scout the area out.

As I made it over Dunraven Pass, I saw a wall of charcoal and black in the distance.  I was driving right into an oncoming thunderstorm.  I pressed on.

If you’ve read these reports, you know I’ve been searching for owls a lot this week.  Of course, this happened to be the one spot I hadn’t checked yet.  It was very wet, so I kept trying to hold off until things dried out, but with a confirmed sighting it was time to get in there.  Naturally, the moment I walked in, the rain and sleet started falling hard.

First sighting: a pair of soiled men’s underwear.  Hmm… maybe someone ran into a bear!

Second sighting: a gray jay.  I was only two words away from my great gray owl!

I had already been calling out “Hey Bear!” a fair amount as I explored the woods, but I increased the frequency after discovering the many piles of dung.  Just in time too.

As I was about to enter a meadow, a grizzly bear bolted into the woods about 40 yards away.  It was a solid looking bear (not huge, but certainly a healthy adult), sporting a collar.  Suffice to say, I didn’t feel like venturing further on my own.  With the amount of scat about, there was no telling if there were multiple grizzlies around.  So I started backing out, calling out to the bear to let it know where I was.

I skirted the edge of another meadow and saw the grizz reappear.  It was busy digging up food, so I snapped a couple quick photos, calling to it all the while.  It paused to sniff the air a bit. 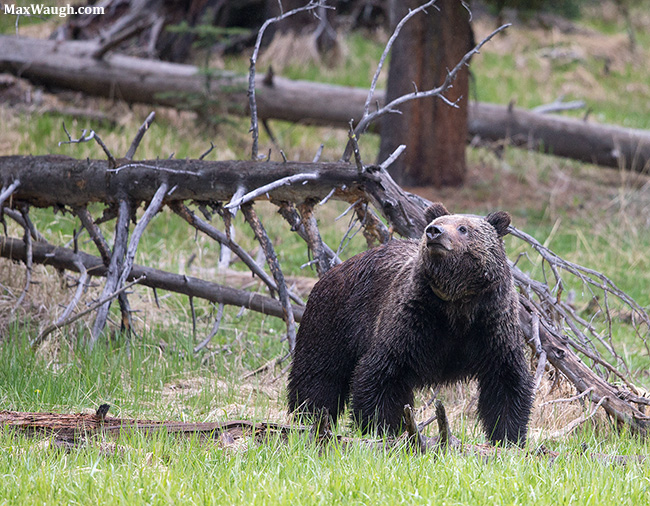 Obviously, I’m not quite as delicious as grubs or roots, because it went back to digging.  I continued to head back out.

That’s when Linda and her husband Reggie showed up.  They mentioned having seen all the scat earlier, but missed the bear while they were with the owls.  Since they were up for more owl action, we reentered the forest.  By this time, Poopsy (I’m pretty convinced all that scat was his!) had moved to the far side of the meadow and was heading away from us, so we continued our search, still calling out in case any spare bears were around.

We got to the meadow the grizz had vacated, where Linda had seen both owls earlier in the day.  I soon found one, perched in a tree right above the spot the bear had run from when I first approached.  Finally, a great gray. 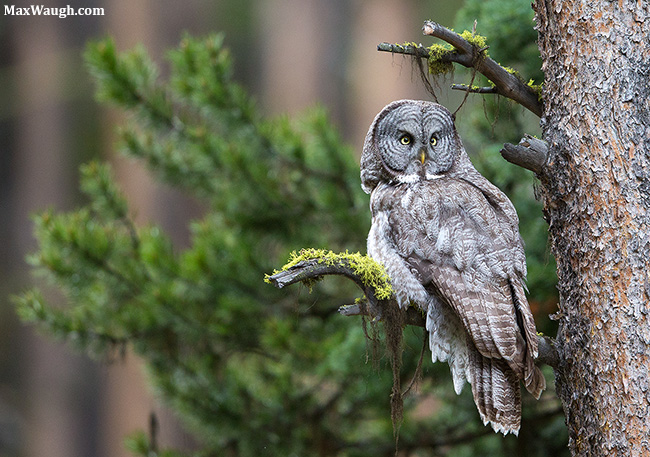 Finding these magnificent owls in the woods is one of my favorite activities in Yellowstone.  It’s really special exploring the quiet forest and coming across one of these large silent predators as it glides through the trees and hunts on the edges of meadows.

We were able to stay with it for a short while as it flew to a couple different perches.  Toward the end I was set up a fair distance away while it was on a perfect perch for hunting.  I hoped to capture some flight shots, and it gave me a bit of false hope as it scanned the grounds below.  But eventually, as the sky began to darken even more (the storm was still passing through), it just decided to take a nap.  Oh well.

Nonetheless, it was a satisfying end to the day.  The long drive back over the pass took me past Poopsy (by this time out near Canyon Junction and causing a bear jam), out of the storm, past a bear+cubs jam still going on near Calcite Springs and through a Lamar Valley capped with a rainbow at the east end.