Funny how a little change in the weather can give you a bit of a reality check.  I noticed as I was leaving at my somewhat usual time of 6am that we had our first clear morning of the entire trip.  Boy, I thought, the sky is blue.  And that’s when I realized how late 6:00 really was!  And this is why my tour groups leave at 4:30-5:00am on average.  By my lonesome, lazy self, I’m anything but the early bird.

The sun was already shining on Round Prairie when I passed through.  Once again, the roads in the Lamar were empty.  I began to get the all too familiar paranoid feeling when nobody’s passing me going the other way…

STAGE 1, NE Corner: I’m not seeing much in the way of wildlife thanks to all these trees, but boy is it beautiful here!

STAGE 2, Hitching Post: Hmm… no wolf watchers here.  The Lamars must be out of town.

STAGE 3, Buffalo Ranch: Wow, nobody.  I’m sure they’re all trying to radio me about the great photo op ahead, but I’m just out of range.

STAGE 4, Lamar Canyon: I don’t care if I don’t have cell coverage, why isn’t anyone texting me about the amazing encounter???

STAGE 4A, Detour to Slough Creek: Oh look, it’s packed.  They’re all staring at dots.  I guess I’m not missing anything after all.

STAGE 5, Roosevelt: Wait, I haven’t seen any photographers.  What crazy action am I missing?  And which %#$&*@ way do I turn to find them?!  Aaaah!

For once, there was something going on without me.  One of the black sows with cubs was near the road again near Calcite Springs.  I pulled into an open space and joined the already burgeoning crowd.  Mom was grazing just above the road, while the cubs were climbing a nearby tree.  They were pretty close.  Unfortunately for me, they never really got out into the open as they explored what was apparently a very fascinating backside of the tree.  In an hour I got maybe one clear shot of the cubs. 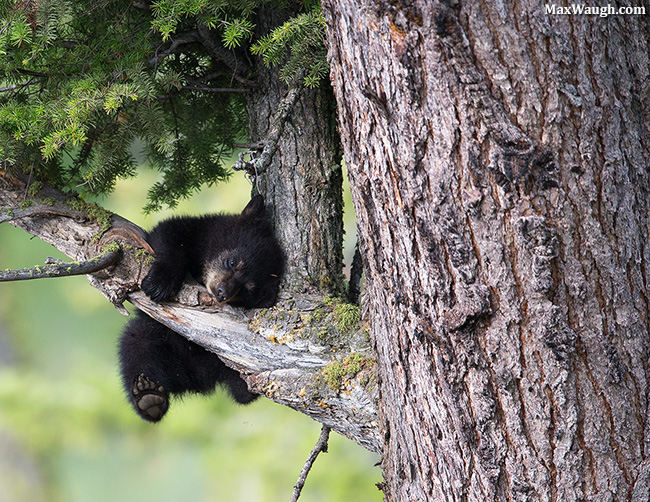 Before we knew it, it was Ranger:30.  They arrived a half hour earlier than normal, but they allowed us to stay put, as long as the sow didn’t get any closer to the road.  By this time she was nursing the cubs (once again, against the fascinating backside of a tree), and the whole family then took a nap.  So there was no need to move anyone.

And then the rains came.

This drove away maybe 1/3 of the crowd.  The rest of us donned rain gear, covered our cameras and lenses, shivered a bit, and waited it out.

Eventually things did clear, and our patience was rewarded when the bears began to stir.  Of course, it was at this point that the rangers doled out warnings.  We were not dealing with “Rosie” on this day.  This was the other sow with new cubs.  The one who for the last two years was parenting a black and cinnamon cub, and therefore had been dubbed “the Mixed Sow.”  She also got in a lot of trouble, charging nearly every ranger at one point or another as they watched over her bear jams.  Though currently tolerant, she’s a bit testy at times, as the rangers reminded us on this particular morning.  So maybe we’ll just call her the Mixed Emotions Sow. 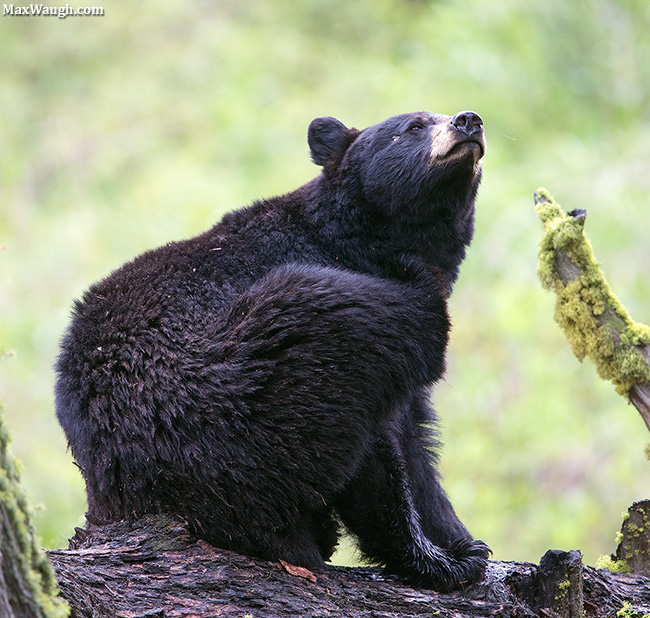 The bear family got up and started walking.  And it was time for us to move.  A couple times we had to shuffle en masse down to a different pullout along the road.  Those who had a sense of where she was heading chose to go toward Tower Fall.  A good choice, as the cubbies did eventually follow their mother.  Rather than climb any tall trees, they roamed the grassy hillside and climbed on a few fallen logs.  Finally, I had a few decent photo opportunities. 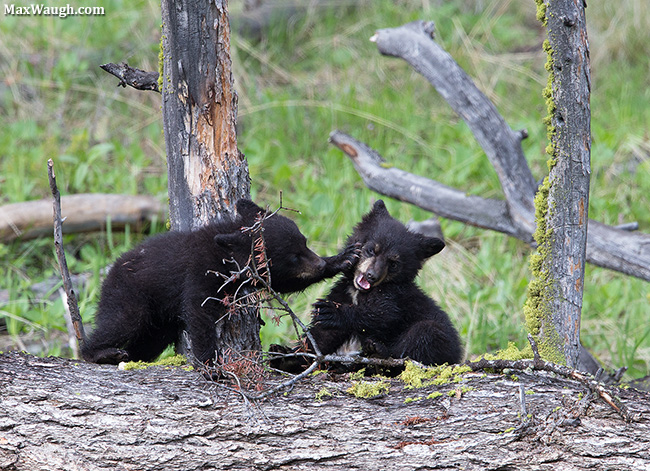 Nearby, a marmot peeked out of the rock retaining wall along the road, wondering what all the commotion was about.  Meanwhile, the bears continued east, up the hill away from the road (the only option other than actually walking the road) and disappeared.  A good show—my best from any bears on this trip so far, unless you count the grizzly’s record bowel movements—so it was good use of my morning.

On my way back to Silver Gate, there were four coyotes hunting together in the valley, and a bull moose stopped traffic about a mile inside the entrance.  And back home our builders mentioned a cow moose had been grazing in our meadow for a bit.  Still waiting to see one of the rumored new calves around though.

I got some work done, grabbed a really unhealthy Moose Tracks shake from the Stop the Car and returned to the park.  It was an uneventful excursion.  I arrived back at Calcite to catch the tail end of the M.E. Sow’s afternoon show, and that was really about it.

I learned my lesson from yesterday and hit the road early today.  Eight minutes early.  Well, it was overcast again, so I wasn’t missing too much great light this time.

There were a few hours to kill before a scheduled meet-up later in the morning, so I casually drove the northern road.  In Little America I passed a small gathering of vehicles with large lenses set up on tripods.  It seemed I had just missed something.  I thought it may have been the grizzly with two cubs that’s been seen around Junction Butte, but in fact at least two wolves had passed through.  Later I learned that some folks had been fortunate to see them near the road (very) early in the morning.

I figured Calcite Springs was my best bet for action this morning, and that proved to be the case.  The Mixed Emotions Sow was once again out near the road, so I joined the small, quiet group of photographers and observers.  The bear family was below the road at this point, where it was still quite dark, so the photography didn’t really start up until she crossed the road… leaving her cubs sleeping at the base of a tree on the opposite side.

It wasn’t the most comfortable situation, especially given this bear’s unpredictable temperament.  Onlookers behaved appropriately for the most part, and if someone looked to be doing something potentially foolhardy, a more experienced visitor was there to step forward and give them a quiet word of advice.  Ultimately, nobody wanted to be standing in between the sow and her offspring, so a gap formed in the crowd in order to leave a clear path.  It constantly adjusted as she moved along the hillside to graze.

Eventually she did cross over and returned to the little ones.  They woke up from their short nap and climbed a tree for a bit before partaking in a very quick nursing session. 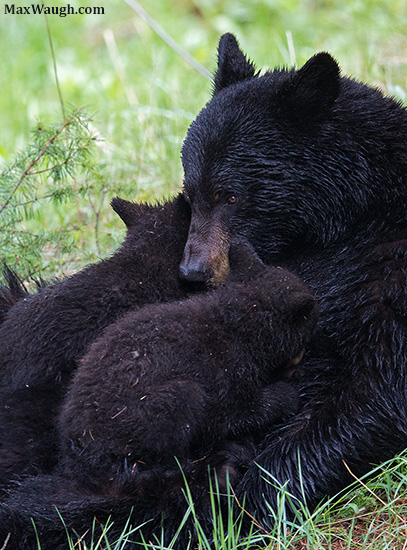 Then it was time for the bears to depart, and they headed down into the woods.  Perhaps they knew the rangers were about to come on duty and wanted to save them some work by clearing the road.

As mentioned, I had an appointment.  A former client and another friend both desperately wanted to see and photograph a great gray owl, so I had agreed to help them in their search.  Before returning to the area where I had seen the owl two days ago, I stopped at another of my “owl spots” to snoop around.  Empty, so I drove to the designated meeting place.

We weren’t the only group in those woods, but that ended up being fortuitous.  Our initial search was long and wet, but we came up empty.  Just as we were considering packing up, we got word that someone else had seen an owl briefly.  And then word from someone else that they had spotted an owl in a different spot.  We already knew there were multiple owls in this area, so it made sense to give the woods one last shot.  Everyone was game, so we went back in.

At this point, friends and former clients Linda and Reg were back in there as well, and once again they spotted the owl first.  Reg developed a reputation as an excellent spotter during my South Africa tour a couple years ago, and I’m glad he’s putting these skills to use in Yellowstone.  We got the call that he had spied a great gray—naturally, way back where our adventure began; it had flown in between searches—and joined them after another wet, muddy slog through the woods.

The owl was perched in a difficult spot for photos, behind an overhanging mossy branch next to a tree trunk.  As it alternated between listening for prey and napping, the light was constantly changing due to rolling clouds overhead.  It was a challenging situation.

We were stationed fairly far from what is often a pretty tolerant species.  Though some close portraits are always nice, we wanted to give it space in case it chose to hunt.  Perhaps flight shots were in the offing…

The bird did eventually perk up, honing in on something moving in the grass directly below.  Finally it pounced.  Sadly, this all occurred behind a lot of fallen trees and protruding branches, so it was nearly impossible to get clear views, even when it flew back up to its original perch.  So we waited longer.

Once again it went to the ground.  And failed to catch a meal.  But this time, it chose to return to a different, more open perch.  Our group was ready. 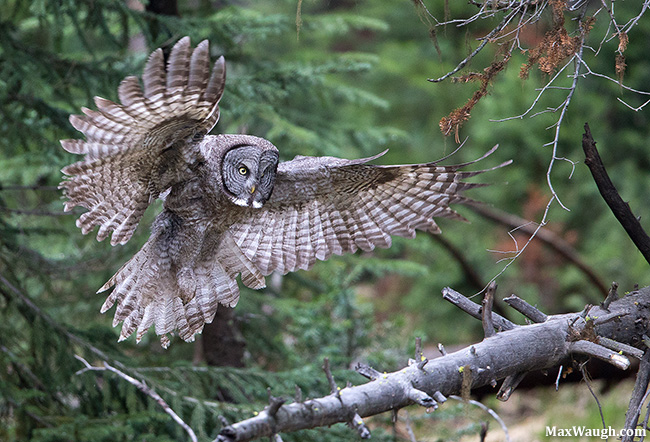 Nearly everyone in our small row of photographers nailed this landing.  It was pretty exciting.  Soon, the owl flew off deep into the woods, and our session was over.  As a bonus, there were no grizzly encounters this time!

After a celebratory (and sloooow) lunch break at Canyon, we parted ways.  A few of us headed south.  Wolf 755M of the Wapiti Pack had made a kill out near the Yellowstone River in Hayden.  I could just see him as I drove past.  Probably 100 yards too far for even “wolf-ish” photos.

I continued all the way to the Lake, ending up at Lake Butte Overlook, where I saw some of my East Side peers in the photography community for the first time on this trip.  We had a chance to chat a bit in the peace and quiet of the parking lot (a rarity on Memorial Day Weekend) before I decided it was time to return northward.  My journey home was only interrupted by a short break to photograph a couple of ravens near the road. 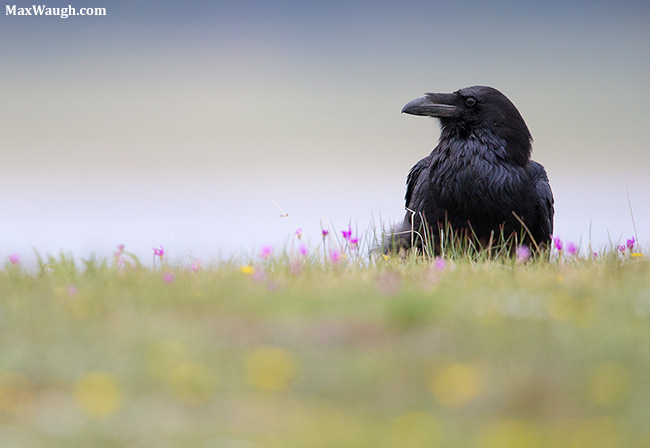 No bears to be seen on the voyage back over Dunraven and past Tower, and it was quiet the rest of the way.