I took a hiatus from the park, in part to avoid the Memorial Day crowds, and went to Idaho for a private workshop.  No report from this part of the trip, but there were plenty of photos taken, which I’ll share at some point.  Here’s a northern harrier from Monday. 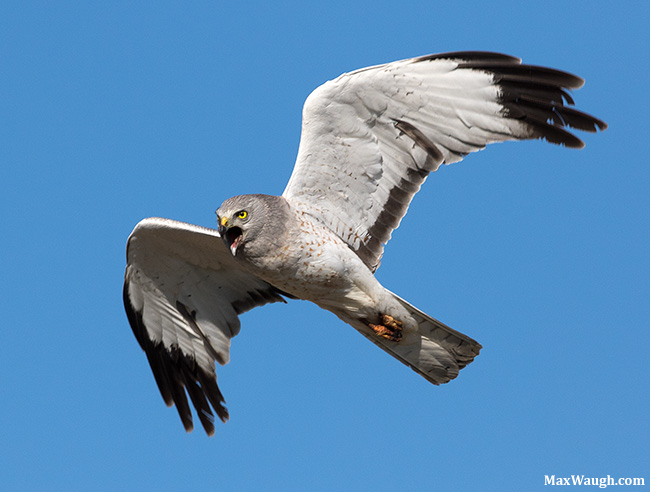 There were a lot more birds to photograph as well.  It was nice to get some good photo opportunities away from the crowds for a bit.

On Tuesday I was pretty exhausted from the previous couple of days, so I didn’t set an alarm and ultimately hit the road around 8am.  As you might expect, things were fairly relaxed and peaceful by the time I made it into the park.

A lone gray wolf wandered high above the road in the western Lamar, and I stopped briefly to catch my first peek of the Junction Butte pups through a scope (very far away, as usual).  In Little America, I photographed a bachelor herd of pronghorns. 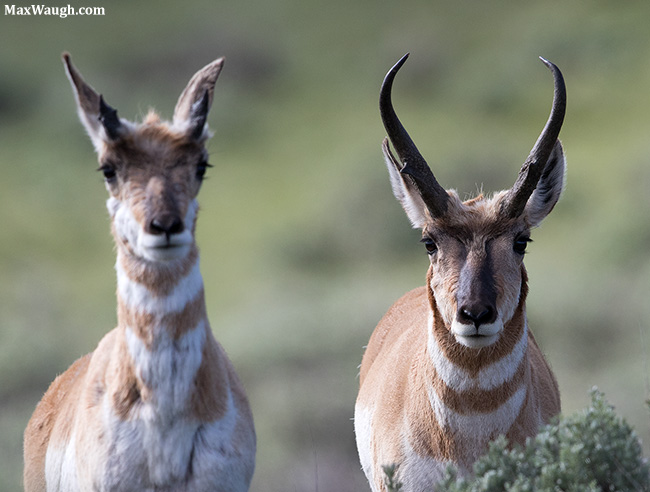 There wasn’t much happening further along either (unless you count snapping a few photos of Canada goslings at Rainy Lake), so I decided it would be a good time to go exploring on foot.  I hiked back behind Junction Butte, an area that’s usually full of wildlife, mostly of the smaller variety.  I did see a few pronghorn, a herd of bison gathering in the shade of the trees, and a few scattered elk.  No fox or badger as I’d hoped, but there were plenty of ground squirrels and even a marmot.

It’s a very good area for birds.  Any grove of aspens is bound to house a few nesting species.  This time, I was fortunate to find a male Williamson’s sapsucker peeking out of his nest hole. 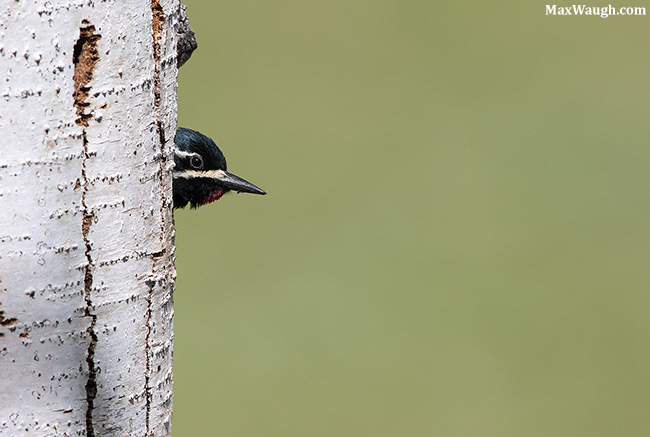 I even paused to snap a couple landscape photos! 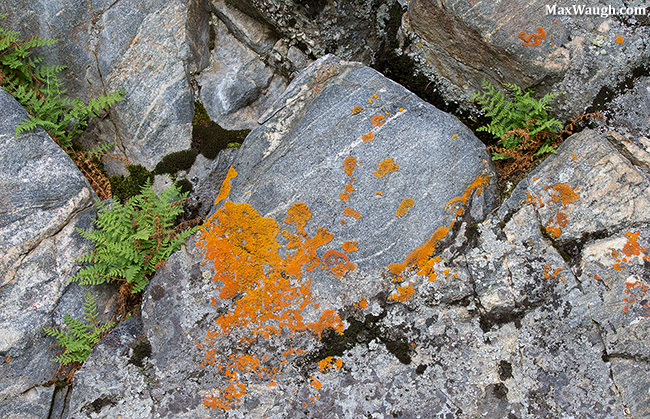 Flickers, bluebirds, finches, sparrows and other species flitted about in the meadows and trees.  In the distance, a cheeky raven took on two red-tailed hawks in a mid-air dance off.  I passed a pair of resting mule deer on my way out to find a spot for a picnic, and had lunch on a cliff overlooking the Lamar River.  A perfect place for mountain lions if I do say so, but on this day I had the spot to myself.

On the hike back, I stopped at a natural spring, hoping to catch more birds flying in.  Instead, I was entertained by a pair of chipmunks, which were busy picking dandelions. 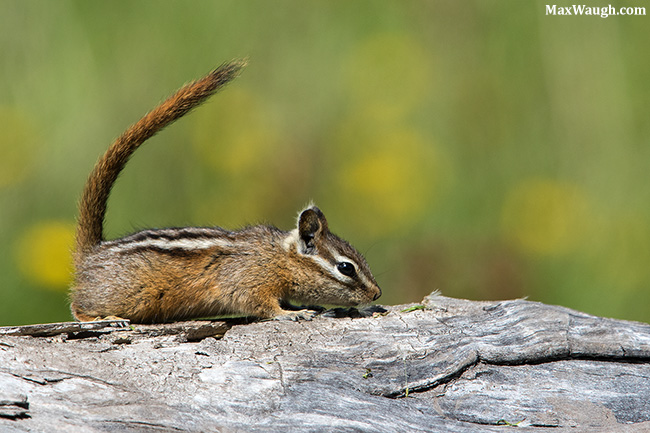 Upon returning to the car, I had to drive home to do some work, but I was back out for a few hours in the afternoon.  A coyote fed its pups far above the road in the valley.  Meanwhile, a Uinta ground squirrel was trying to raise its offspring in a burrow an inch away from the road in Little America.  While I was waiting to see if photos were possible, I thought it would probably only be a matter of time before someone pulled off the road and ran them over like Whack-A-Moles.  Within ten minutes, that’s exactly what happened.  Someone wanted to know what I was photographing and drove right over the hole, though I think the squirrels ducked down in time.  I got out of there after that, lest my presence lead to any more off-road dangers for the squirrels… but if they don’t relocate soon they’re not long for this world.

One of the black bears with twin cubs was near the Yellowstone Bridge.  The cubs were sticking to the higher trees and were obscured most of the time, but I soon had some better bear luck anyway.  On my way out of the park, I had one of the more interesting wildlife sightings I’ve ever had in the far northeast corner.

With less than a mile to the gate, I spied a lone dead pine tree towering about fifty feet off the ground on the edge of the Soda Butte Creek canyon.  At the top were what looked to be a pair of ravens.  Except as I approached, the black blob was obviously far too big to be a bird.  Instead, it was a bear. 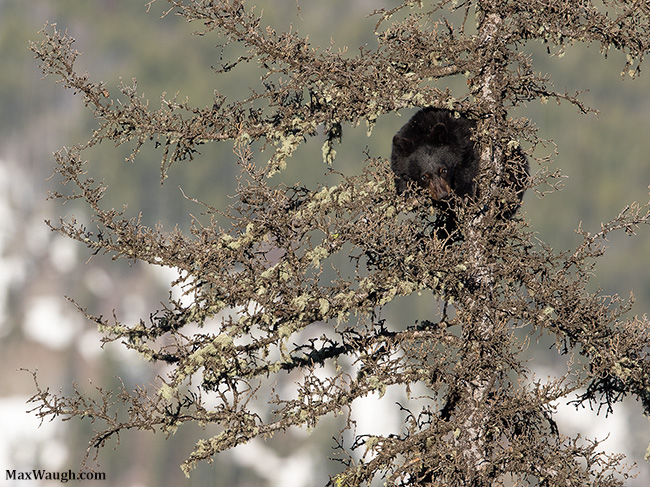 It looks lonely at the top of the world.  I figured this was probably a yearling that had recently been booted by its mom, and it was still acting cubbish by seeking safety at the very top of this tree as it settled in for an evening nap.  Seeing it high up in the late afternoon light, alone in front of the mountains, was really great.

I switched things up this morning (I don’t mean by getting out earlier, though that did happen) and ventured west after coming up empty on my drive in.  A quick jaunt through the Upper Terrace Drive and a pass through the HooDoos with its Quad Mom stalkers yielded no sightings.  No worries, as I had heard about a fairly reliable sighting at Sheepeater Cliff: baby marmots! 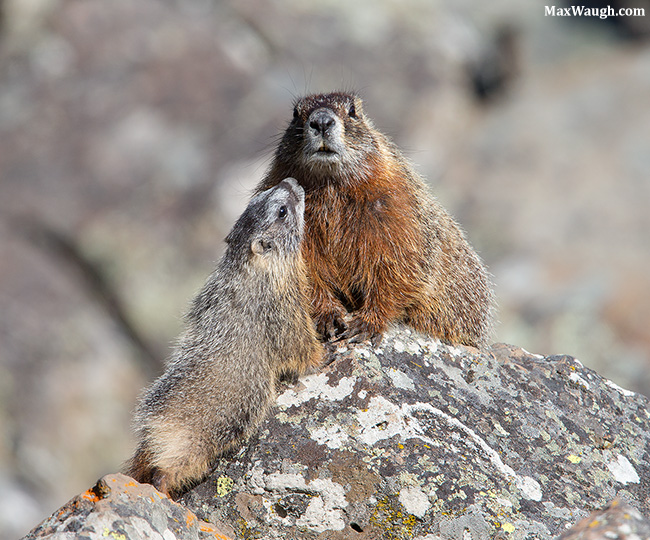 I spent twenty minutes or so trying to photograph the little ones as they scrambled about and only occasionally returned to hang out together or to bug mom.  Then it was time to drive south and try for great gray owls again.

No luck this time, but not for lack of trying.  Some friends were already searching the woods when I arrived, and I joined the search party.  Up and over, out and about, every which way… and finally after an hour I caught a brief glimpse of an owl flying away.  We had one more quick view of it flying again, off into the densest part of the forest.  That was our sign that it was time to give up the owl quest for this morning.

Before returning northward, I made a quick detour to Otter Creek, where a grizzly bear had been seen on a carcass.  By the time I arrived it was gone and the carcass (an elk calf) was hauled away by the park service since it was close to the picnic area.  There was still something attracting a small crowd though.  A raven chick had fallen out of its nest and was sitting on the ground, mouth wide open, as though feedings should continue as normal. 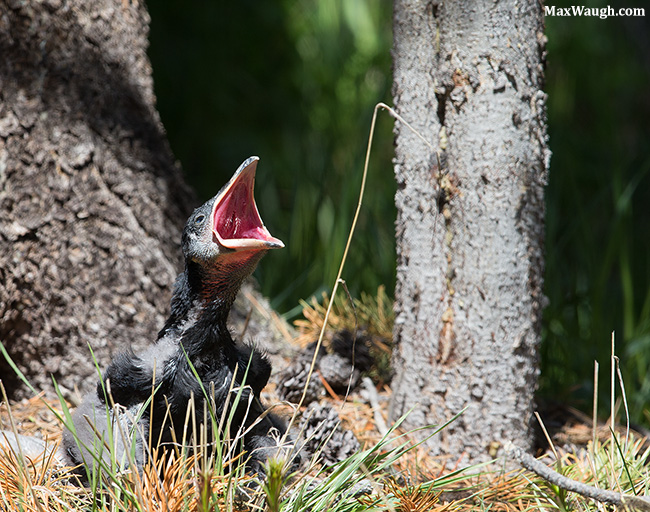 The rangers carefully relocated the bird to get it away from the busy picnic area, though at this point its unknown whether its parents will manage to find and continue to feed it.

I had to get back to Silver Gate to complete some more work, but tomorrow I should get a full park day in, finally!