It was going to be a short final couple of days for this first leg of my spring adventures.  On Thursday I had friends with me and Friday I had to pack and clean before leaving for my week long “vacation” at home back in Seattle.

My friends and I started the day with a hike.  Well, technically we started with a moose sighting just inside the NE entrance, and then a distant view of three mountain goats and a kid on the lower face of Barronette.  And then we saw a moose with brand new twin calves at Lower Barronette.  Oh, and then we had to check on a carcass near Soda Butte, though we just missed the wolves there.

Then, finally, we were ready for our hike.  Didn’t see much back in the woods, though I did interrupt a displaying Ruffed grouse (didn’t have my camera) and heard another drumming.

It was pretty well into the morning when we returned to the parking lot, so we headed west.  I was playing tour guide, so naturally we stopped a lot for some of the little things many visitors might pass over.  I showed my friends owlets on a nest, ospreys on a nest, a peregrine on a nest.  We also stopped at Slough Creek to borrow a peek through a scope at a lone gray wolf.

No bears this particular morning, but we went over Dunraven so I could check on another reported carcass.  I also wanted to take my friends back to look for the great gray owls, but there were a couple of Yellowstone Association groups back there, so we decided to hold off a bit.  We just missed a nice grizzly sighting in Hayden, and ventured down all the way to Lake Butte Overlook, where we missed Raspberry and cub.

On our way back to Fishing Bridge Junction, I saw a lone woman standing off the road, staring at the trees with binoculars.  This was a bit peculiar.  There was a good chance it was something interesting, since folks don’t just stop and scope bison.  If it were a bear, there would be a lot more people.  I pulled over and looked toward the trees. 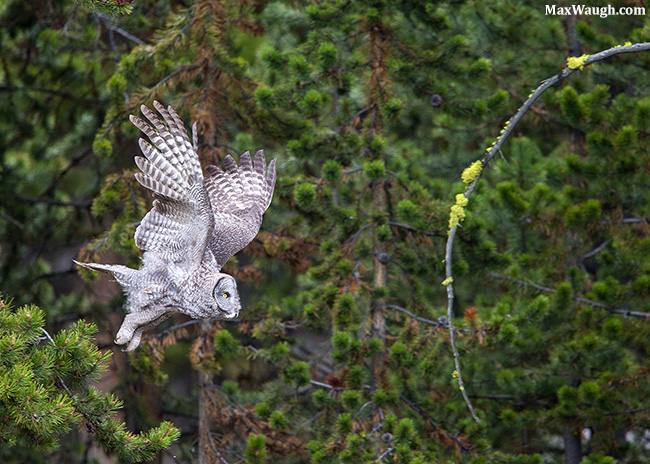 Hmm… I guess we didn’t need to tromp around in the muddy woods after all.

It flew a couple times for the now-burgeoning owl jam crowd before we started driving back north.  I chose to go around to the west side, to check on a reported carcass at Gibbon Meadows (nada) and head up to Sheepeater to see the baby marmots.  We skirted a thunderstorm and did get to see the marmots just emerging from their rocky shelters.  From there I decided to take a quick detour down the Upper Terrace Drive.  Good choice.  A cinnamon black bear was wandering near the road. 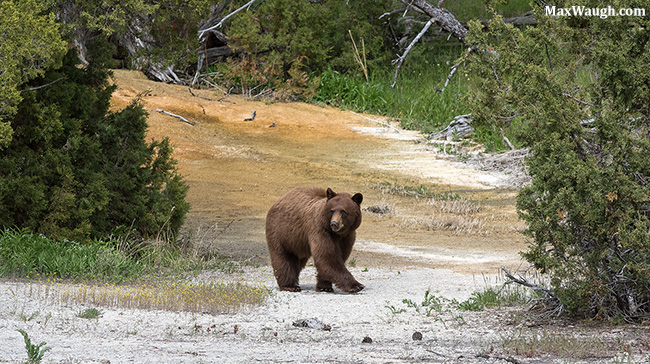 At one point it actually passed within only a couple feet of our vehicle.  It crossed the road, then came back, spotted and subsequently got scared by its own reflection in the shiny bumper of another vehicle, and then moved on.  A sapsucker pecked at a tree nearby.

We stopped at Mammoth (no owls in sight for some reason) before heading out to the east.  At Slough we stopped again and got a peek at wolf pups (thanks for the look, Kathie Lynch) and saw more wolves east of Soda Butte.  Overall it was a great day with lots of variety.

It was my final day before heading for home, which meant I had to stay back and clean up the cabin and pack.  What I should have done was gone out for a couple hours in the morning and then returned.  Instead, I got to enjoy reports from my friends (who did manage to depart early) and others about some serious action in the northern range.

My friends hit the road and luckily were not in a hurry, so they were able to check a few hot spots on their way out of Yellowstone.  Near Round Prairie they had a moose with a tiny calf cross the road in front of their vehicle.  At Slough Creek they had a badger just off the road, and saw wolves eyeing a lame bison.  On the Tower Road they encountered one of the sows with twin cubs.  Not a bad way to end a short visit to Yellowstone, on top of all the stuff we saw the day before.

I finally left after lunch time.  Obviously, it was too late to expect any heavy action, but I did get one final glimpse of the sow with the cinnamon yearlings.  She had just crossed the road near the Picnic Area and went down into the lower bowl to graze.  Then she made a beeline for the small stand of aspens on the edge of the meadow, climbed a tree and investigated one of the many bird nests in the trunks.  I witnessed this same bear doing the same thing during one of my tours last year (at the time, someone insisted that there was no way a bear was climbing a tree to look for bird nests).  The year before, another black bear climbed a tree near Elk Creek and tore through a flicker nest.  This time, the mom ripped open the aspen bark and jammed her snout into the expanded hole.  Eventually she did come out with something that was pink and flailing, perhaps a flicker chick.

Cool behavior to witness, and perhaps the last time I’ll see this family together.  I’m only gone for a week before returning to the park, but who knows, maybe she’ll have booted her cubs and will be in the throes of the mating season by the time I see her again.

Afterward, I drove west.  No more bear action in the usual spots, so I went all the way to Mammoth and headed up toward the Hoodoos (a stop for baby marmots) and Sheepeater Cliff, where I also looked for baby marmots but instead saw the usual golden-mantled squirrels and chipmunks. 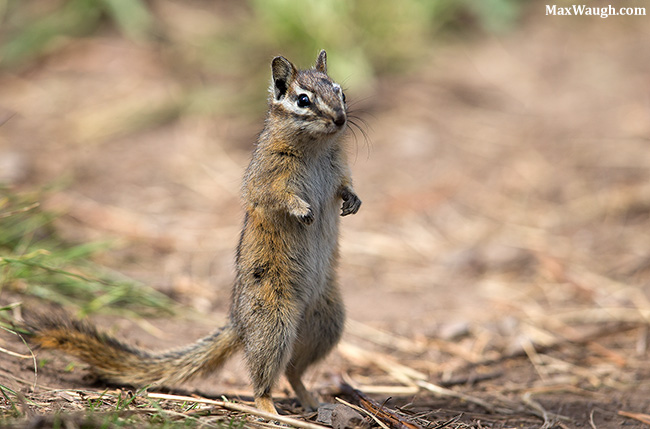 Overall, it was a low-key way to end what has generally been a low-key spring trip… but the adventure isn’t over yet!

I will return to lead my annual spring photo tour next week, and then will stay on for an extra week to host some friends.  Stay tuned for more Yellowstone trip reports.