Rain, rain, go away.  Wow, it was wet on Wednesday.  I don’t think I’ve ever had a full day rained out while leading a tour, but I thought that streak might end yesterday.  It was coming down everywhere.

About the only thing we saw of interest in the morning muck were some distant pronghorn fawns.  Otherwise, I tried to probe everywhere to see where there might be a break from the downpour.  We even went over Dunraven Pass, where rain turned to slushy snow, and made it down near Cascade Lake.  I refused to go further, figuring they might close Dunraven on us, and sure enough, as we drove back to Tower Fall, we passed a ranger and a half-closed gate.  They closed the pass behind us.

Ultimately, we chose to head toward Silver Gate.  The plan was to hit the Beartooth Highway, and while that wasn’t looking like a great option, I figured lunch in Silver Gate and a quick moose search was a good way to pass some time.

We had lunch at my cabin, and then I did a quick scan of the property in case any moose were bedded down, hiding from the rain.  Whaddya know, not only a cow moose, but a young calf as well!  Unfortunately, they were a bit skittish (even while stationed on the other side of the creek), so we only got brief views as they bounded off into the woods.  Still, my clients checked moose off their list.

Things picked up from there.  First, the weather was miraculously clearing.  Then I spied a bald eagle perched very low near the highway as we left Cooke City.  I thought it was a plastic lawn ornament put up as a joke at first, but it did indeed move, and took off for us as we snapped away.

Further up on the pass, we photographed friendly Uinta ground squirrels, a great horned owl nest, marmots and even had some brief pika views as the storm started blowing in again.

On our way back into the park, we made a brief stop so I could point out a very distant mountain goat to my clients (since we missed them on the Beartooth), and that’s when we got word of a moose with twin calves a bit further down the road. 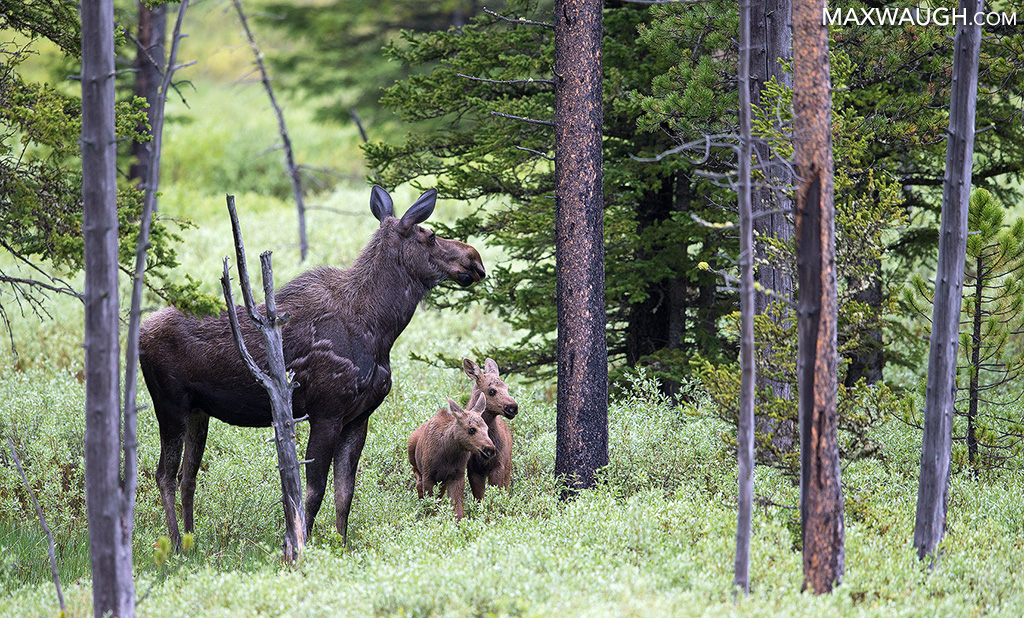 It was the same one I’d seen at Lower Barronette a couple weeks ago.  This time we arrived in time to get some photos as they emerged from the trees.  Something had spooked them.  Someone later said they saw three wolves on the other side of the creek.

Back in the park, we still had a few more stops to make, with distant views of Rosie and her cubs (only the mom came down close enough for photos), and elk calves at Mammoth.

Another marathon day (15-and-a-half hours), but another good one.  As slow as our mornings have been, maybe I should just sleep in until 2pm, when the action seems to heat up for this group.

It was wet this morning, but the weather was supposed to improve quickly.  Speaking of hypotheticals, guides had been warned there would be construction between Mammoth and Norris, including a closed section of road between 10pm and 7am, as of June 1st.  Yet, I’d been hearing lately that nothing was happening on that front.  So it was a good morning to see if we could hit Swan Lake Flat at sunrise.

We made it up with no problems on the road.  However, there was no sunrise to speak of thanks to lingering clouds.  All was quiet, but before we proceeded further into the park I wanted to go back down the hill and try the Upper Terrace Drive.  It’s sometimes nice for out-of-the-way wildlife sightings, including bears (like the one we had a couple weeks ago), elk calves and… 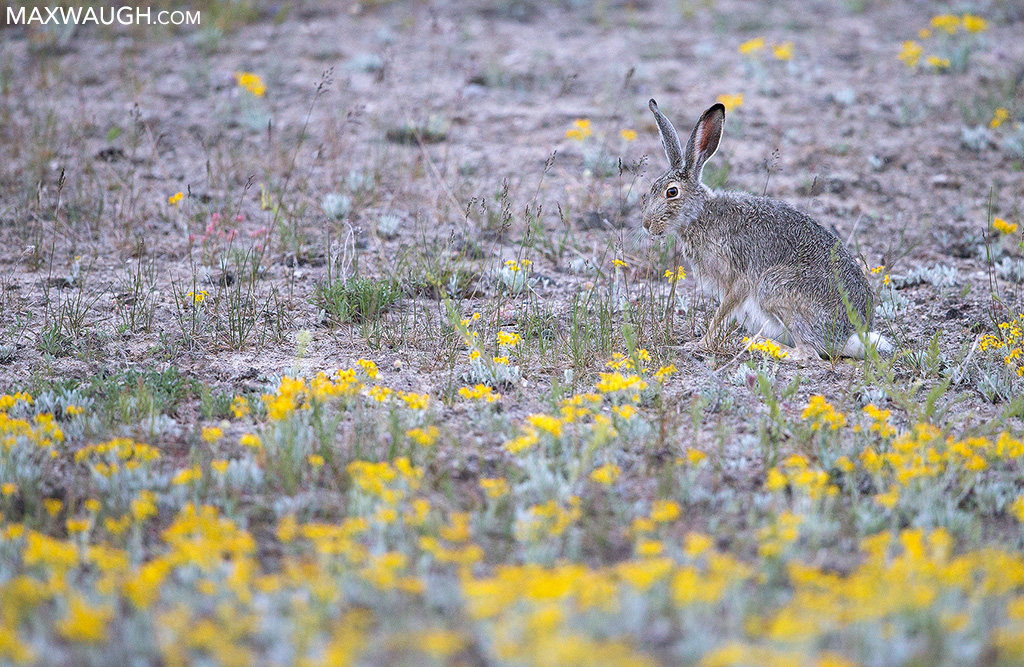 I’ve only ever photographed the white-tailed jackrabbit—one of Yellowstone’s more elusive mammals—during a spring visit to this road four years ago.  Ever since then, I’ve always checked for them, but today was the first time I’ve been able to track them down since that first encounter.  I think my clients may have been a bit befuddled by my excitement over bunnies, but the more elusive critters are always cool to see.

We headed south, with a couple other detours here and there to look for more wildlife, but we didn’t really see too much until we arrived at Lake Butte Overlook.  Raspberry and her cub were barely visible on a distant hillside, but we did finally see one of the drumming grouses near the parking lot.

On the way back north, we made another stop at the Great gray owl meadows, and once again we struck out (though we did spook a Great horned).  Instead of lunching at Otter Creek for a third time this week, I chose to go to Cascade Lake Picnic Area (figuring I could sneak in another short owl hunt after we ate).

Following lunch I left my group and went exploring in the woods.  There was a pleasant surprise waiting for me in a back meadow: a bull moose.  As I headed back to tell my clients, I turned a corner and ran into a Great gray! 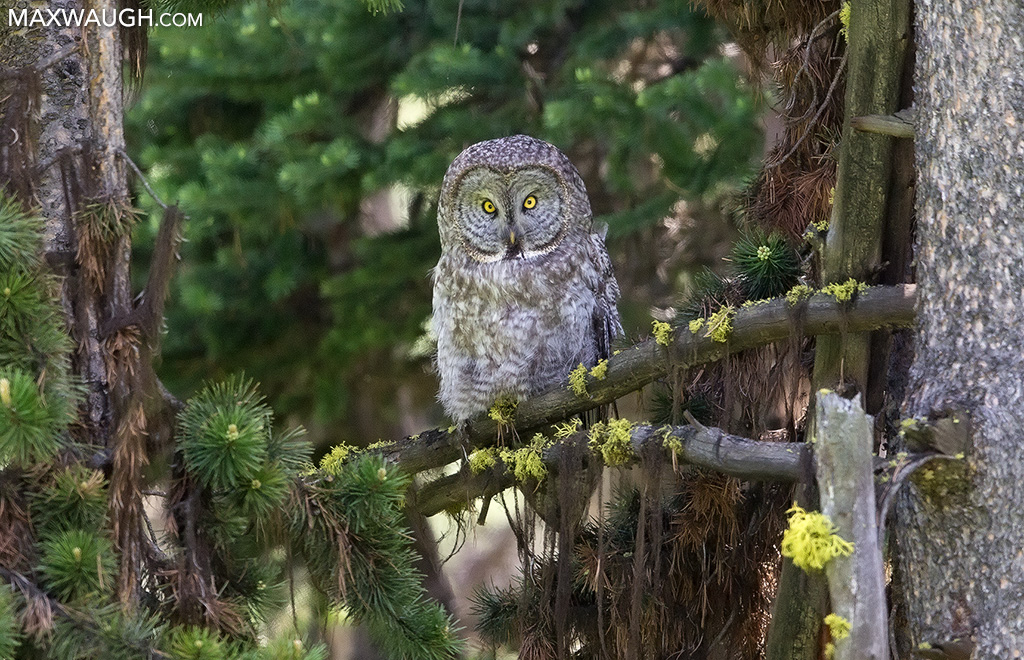 We had to decide which to photograph first, and I prioritized the owl, since we’d put in a lot of effort into seeing one with no reward so far.  Unfortunately, the moose disappeared during this time, and though the owl was not terribly active, everyone got clear shots of our second owl species of the trip.

Heading over Dunraven, we got caught in a number of traffic jams.  One was provided by a large, handsome cinnamon black bear, the first for this group.  We were able to pull over and snap a few photos before it disappeared.  We did not stop for the subsequent black bear at the bottom of the hill.

Hey, only a thirteen-and-a-half hour tour day.  I must be slacking!