Do you know what the Great Karoo is?  When I first heard the name, I wasn’t sure if it was an avian cousin of the nocturnal Great potoo (which I photographed in Costa Rica earlier this year), or perhaps a long-lost marsupial relative of the kangaroo (many of which I encountered in Australia).

The Great Karoo is actually a place, not just a thing.  It’s considered South Africa’s heartland, a rugged, arid landscape located in the eastern Cape.  Stuck somewhere, environmentally-speaking, between the desert and the true bush of the Lowveld, the Karoo boasts a mix of flat dusty open plain, green mountainsides and grassy plateaus. 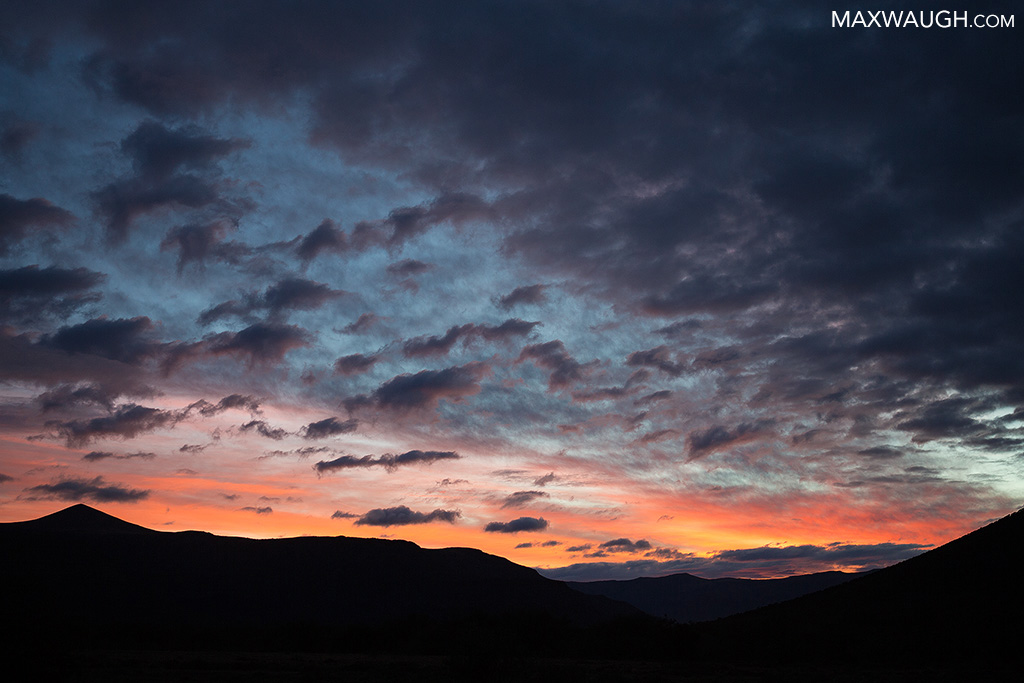 In the heart of the Karoo lies Samara Game Reserve, which first came to my attention when I was planning my latest trip back to South Africa.  I was looking for new destinations to explore, and a friend suggested Samara.   There were a couple of big draws.  First, despite having stayed at a number of camps and private reserves in Africa, I’d never visited this region before.  The chance to explore new territory and potentially see some new species was enticing.  When I heard that Samara offered a good chance of seeing an aardvark in the daytime, I was sold.

It was only one animal, but it’s a biggie.  The aardvark is considered a “holy grail” species in Africa among many wildlife enthusiasts.  Primarily nocturnal, they are incredibly difficult to see during night drives.  Daytime sightings are even rarer.  So when reports of reliable daytime sightings at Samara came out in the last couple years, the reserve was suddenly on many photographers’ radar.  Of course, it’s important to qualify descriptions like “good” and “reliable” when referring to aardvark sightings.  These are relative terms.  A good chance at Samara still means it’s not guaranteed.  The BBC stayed for a month looking for aardvarks and barely got any footage.

At least I chose to visit during the right time of year.  Samara’s daytime aardvark sightings occur more often during winter, when conditions are dryer and cooler.  Still, I didn’t know what my chances really were.  I would have been pleased with a quick encounter from the vehicle in low light, but anything beyond that was a bonus.

Exploring Samara and the Great Karoo

Following a short flight into Port Elizabeth, I rented a car for an easy drive into the interior of the eastern Cape.  Rolling hills interrupted long stretches of flat ranchland.  Plains of dull brown were dotted with explosions of orange, thanks to large flowering aloe plants.  Warthogs and vervet monkeys grazed near the road.  As I approached Samara, I was soon surrounded by the jutting mesas and high plateaus of the Karoo.  It’s a scene reminiscent of the American southwest.  Thankfully with more wildlife. 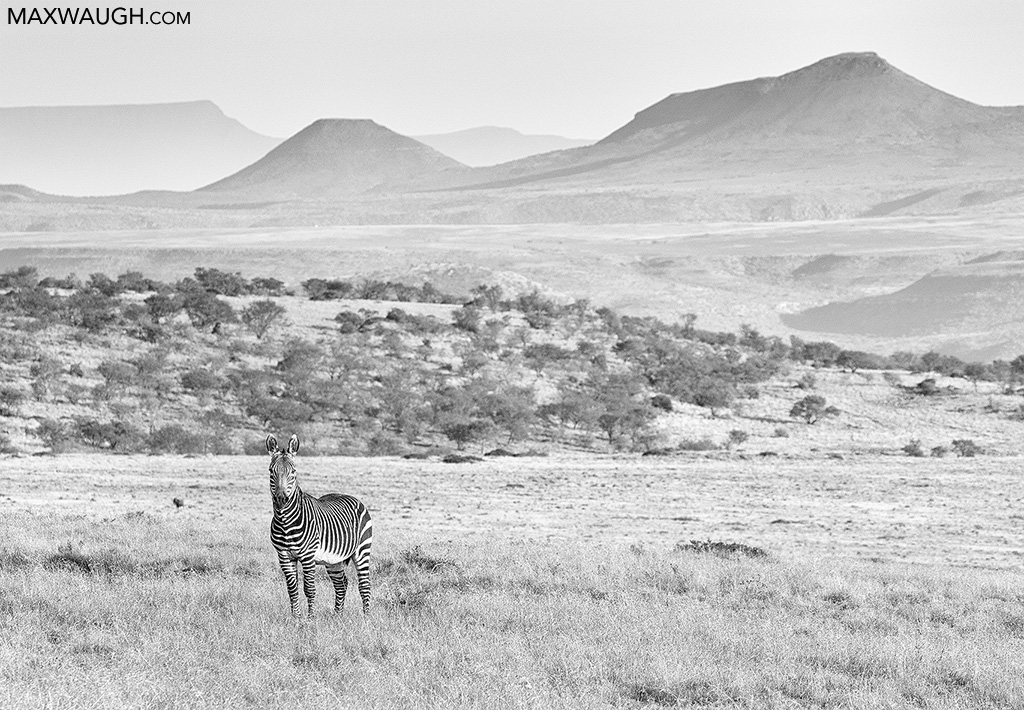 Samara Private Game Reserve is a huge property, comprised of over 70,000 acres (equal to 100 square miles).  As reserves go, that’s quite large, and there’s a good reason for this.  The owners’ dream is to ultimately connect Camdeboo and Mountain Zebra National Parks—Samara currently sits in between—to form a huge conservation area (one that could rival Kruger in size) and finally give isolated species like the Cape mountain zebra space to roam.  A lofty goal, but one that is inching closer to reality as they’ve continued to purchase land and expand Samara’s borders in its first dozen years.

For such a huge reserve, Samara offers visitors a lot of peace and solitude.  There are only two lodging options on the entire property, the small Karoo Lodge and the exclusive Manor House (typically set aside for larger groups).  As with so many other properties in South Africa, the lodge staff is courteous, friendly and professional, and the food is excellent.  You just happen to have 70,000 acres of lovely Karoo wilderness on your doorstep to round out the experience. 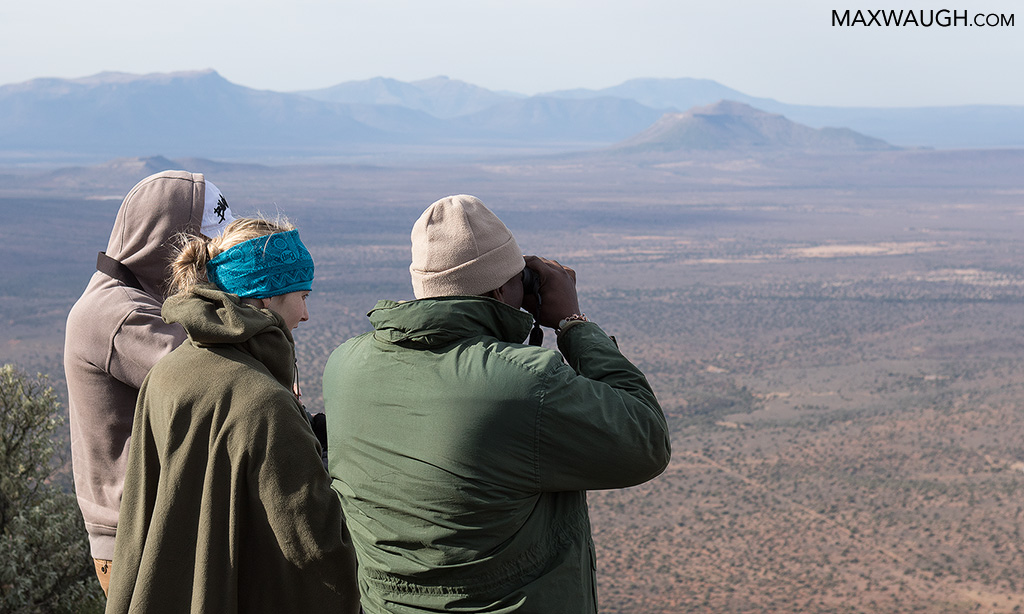 Searching for wildlife and soaking in the views at Samara.

Because Samara is so vast and there is a relatively small number of visitors on the property at a given time, many of the wild residents live out their lives largely undisturbed.  Some creatures go months without seeing a person or a car.  As a result, they’re not sure what to make of a loud, grumbling game drive vehicle, so they often decide to keep their distance.

I found this to be the case with numerous species, from the massive eland antelope (which is shy just about anywhere you go) to the adorable bat-eared foxes, and even the magnificent Blue cranes that settle here in winter.  High above the lodge on the grassy plateaus of the Karoo, the handsome mountain zebras are ever watchful, while herds of exotic-looking black wildebeest run to and fro. 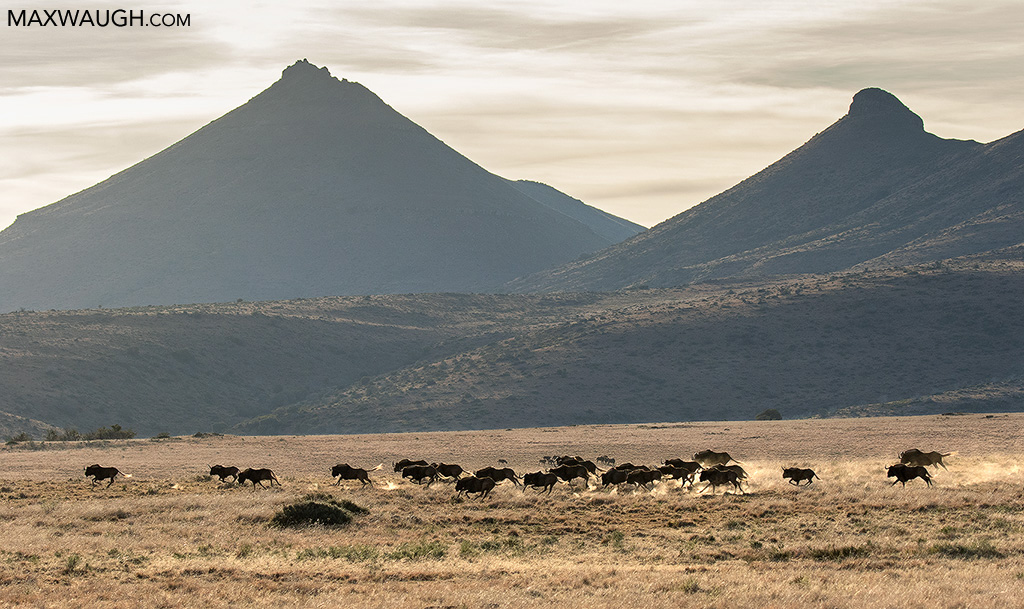 Some animals are friendlier.  The giraffes didn’t seem to care at all until they realized they need to clear the road so we could drive slowly past.  Rhinos, whose horns are being removed preemptively in order to combat poaching (an unfortunate reality in many reserves these days), allowed us to view them up close on foot.  I was even able to sit with a family of meerkats as they slowly became comfortable with my presence… 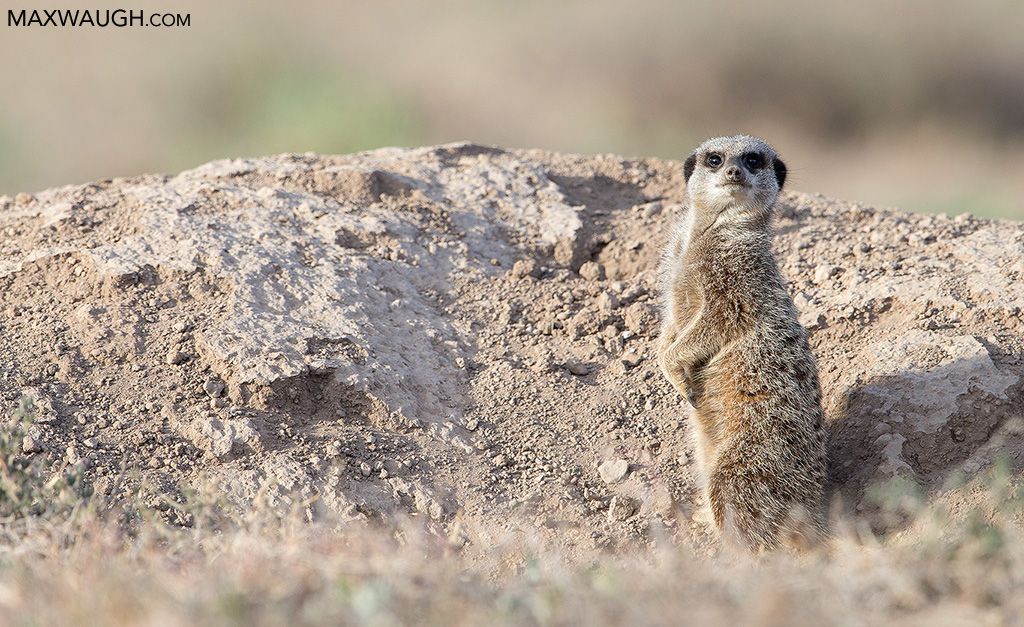 …until, that is, a jackal ran right by me, not paying me any heed but subsequently scattering the meerkats back into their burrow.

Samara has predators too.  Cheetahs currently roam the property, while the foxes and smaller cats are seen on rarer occasions.  There’s talk of introducing lions here, presumably as a tourist draw, but I fear it may spoil the unique opportunities Samara presents to see so much of its wildlife on foot.  I could have never gotten out of the vehicle to approach the rhinos or the meerkats had there been lions around.  Or, for that matter, the aardvark.

Oh, did I fail to mention I saw an aardvark?  Not just one.  I actually had aardvark sightings every day!  Including three daylight encounters.  Yes, it was pretty incredible. 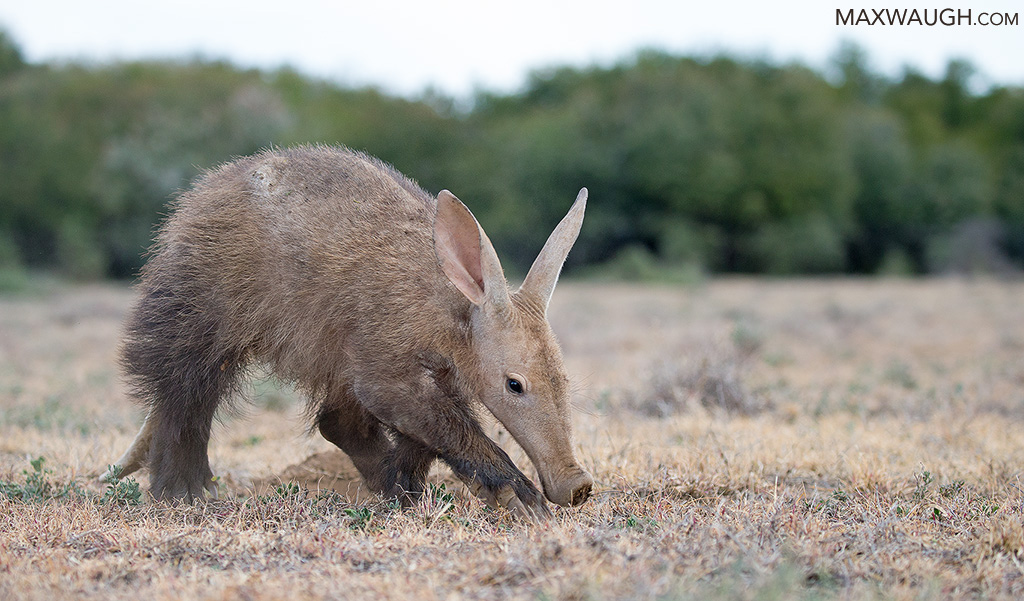 Perhaps the biggest surprise was that the aardvark pictured here was the most cooperative photo subject of any animals in the reserve.  No, in case you’re wondering, she’s not fed (she finds plenty of ants on her own).  The staff at Samara has simply worked hard to make sure she’s comfortable with human presence.  Our dedicated tracker, Given, had walked with her for months prior to my arrival, watching her nap, dig and forage during winter afternoons.  As the aardvark came to understand people weren’t a threat, she proceeded to ignore them. 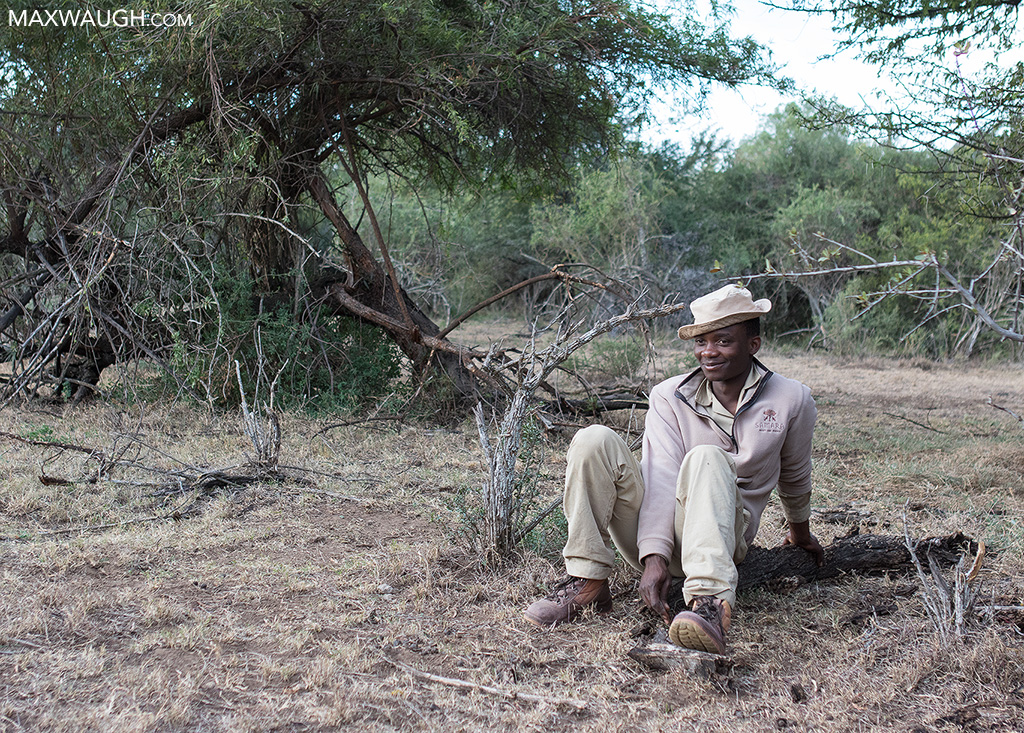 Given may be the world’s foremost aardvark tracker.

Within 15 minutes of my first game drive, one of Africa’s holy grail species was checked off my list (next up: pangolin!).  I knew it was odd-looking, with those donkey-like ears and long snout.  I didn’t expect it to be so big.  And check out those claws!  No wonder it’s such an accomplished excavator. 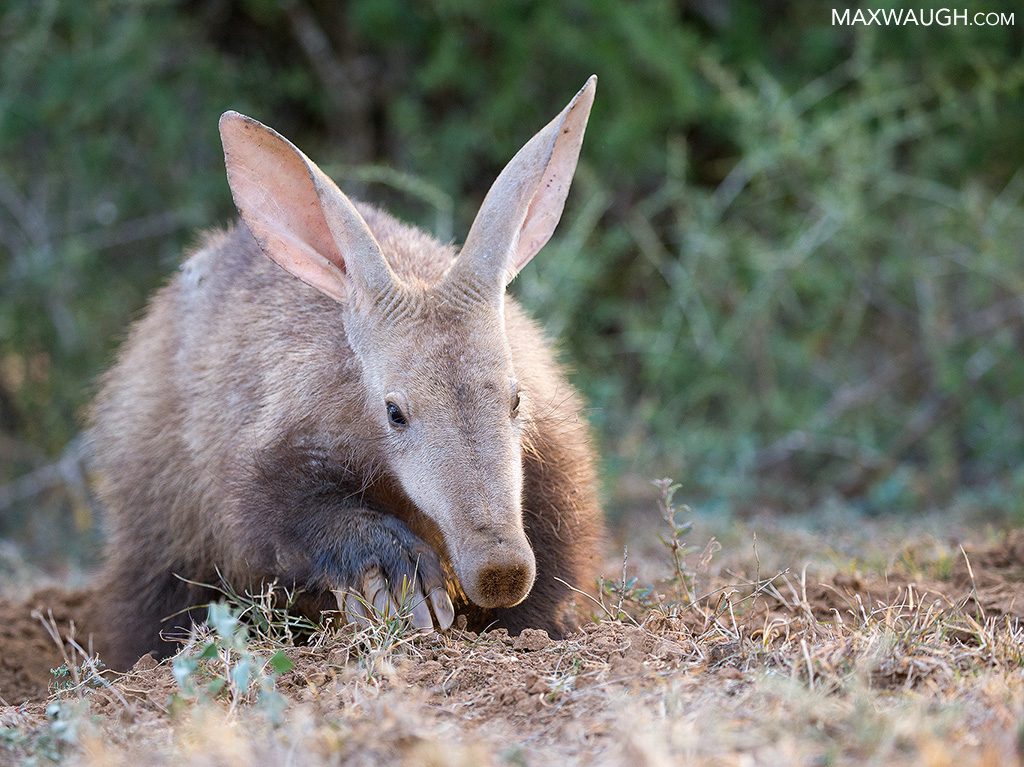 The opportunities I had to view and photograph the aardvark far surpassed any reasonable expectations I may have had.  It proved to be the highlight of my entire trip to South Africa and is certainly one of my favorite photographic moments this year.

There’s no telling how many visitors will be fortunate to enjoy such an experience (just ask the BBC), but at the moment it appears that the folks at Samara have the right strategy in place to make it a viable winter destination for aardvark tourism.  Yes, I’d say there is such a thing.  Some folks I met during my stay were, like myself, there specifically to see an aardvark.

As they move forward and continue to develop this relatively young reserve, Samara’s ownership hopes to make it even more attractive to visitors.  Soon, trackers will start walking with the meerkats, in hopes that they become more comfortable with people as the aardvark has.  Elephants are soon to be released on the property.  The resident cheetah population continues to thrive, and there are hopes that some day soon the Cape leopard may reappear here.  The debate about the return of lions to the top of Samara’s food chain will continue, but for now, the reserve offers a unique opportunity to enjoy the landscapes of the Karoo and encounter some truly unique wildlife on foot.

Highlights: Good chances to see Aardvark (!), black wildebeest, mountain zebra, cheetah.  Possible sightings of black rhino, meerkat, bat-eared fox.  Several other ungulates and grazers can be seen.  Exploration on foot and away from the vehicle is possible with many of these species.  With a vast expanse of land and relatively few game drive vehicles, wildlife encounters are never overcrowded.

When to Go: Winter (remember, it’s at a different time of year in the southern Hemisphere!) for better odds of seeing aardvark and blue crane, cooler temperatures.  Summer for birds, better chance of seeing bat-eared fox, warmer temps.

How to Get There: It’s an easy 2.5-3 hour drive north from Port Elizabeth.  There’s very little traffic along that particular highway.  Just watch out for warthogs and monkeys!

How to Book: Visit Samara’s website or contact Reservations via email.  Be sure to tell them Max sent you!