Yellowstone Fall 2016 Trip Report: Only Ten Hours in the Park!

I’ve had to make a couple trips out to Yellowstone in the past month or so.  Unfortunately, these trips have centered around work at our cabins in Silver Gate, rather than fun and photography in the park itself.  This past week I made my shortest Yellowstone trip ever, only a little over two days!  Luckily, I was able to get all of my work done in one day, which gave me about ten hours of park exploration before my flight home on Day Two.  So here’s a report on my shortest Yellowstone adventure to date.

I fly into Bozeman from Seattle, but our cabins are in Silver Gate.  Sadly, this means I’m forced to drive through Yellowstone to get to our property.  This is why, despite the priority of getting cabin work done during my stay, I brought my wildlife photo gear.  You know, just in case.  It paid off when I drove through on Tuesday afternoon.  As I passed the Yellowstone Picnic Area, a fox was busy mousing in the fields. 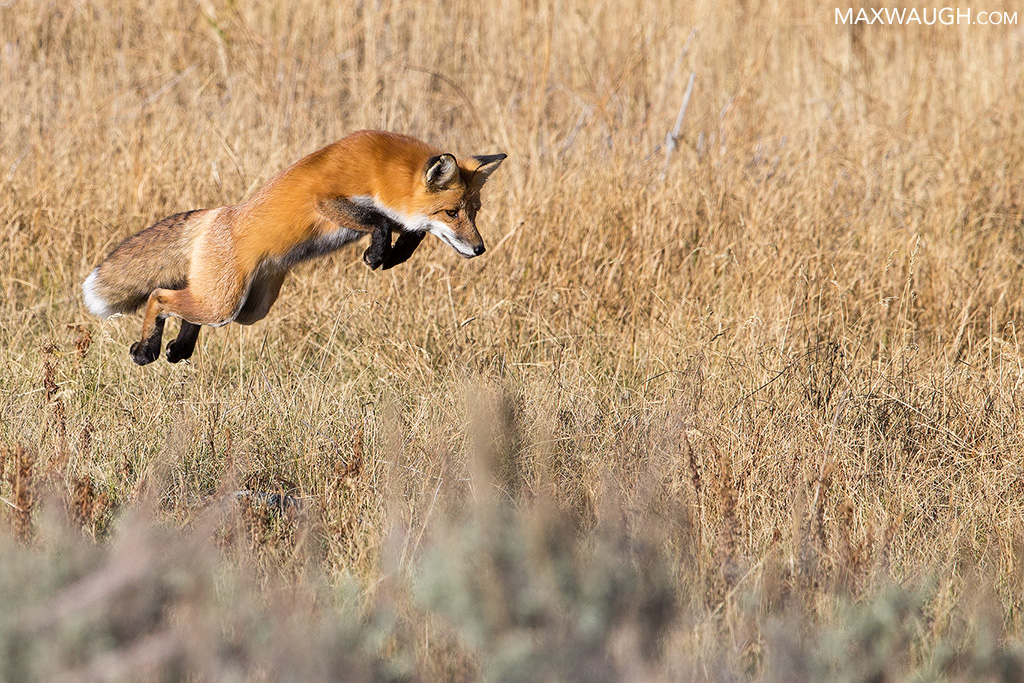 It was quite active.  I sort of rushed getting out there, so I simply threw my body on my 600mm lens, without a lens hood or tripod, and took a series of hand-held shots as it pounced several times and jumped from boulder to boulder as it hunted rodents in the grass.  Twice during my brief stay, it was successful.

I believe this is the same fox I photographed in this area during my winter trip.  The deep burnt orange coat stands out compared to the typically light-orange foxes in the park.  It’s also got the same notch in its right ear. 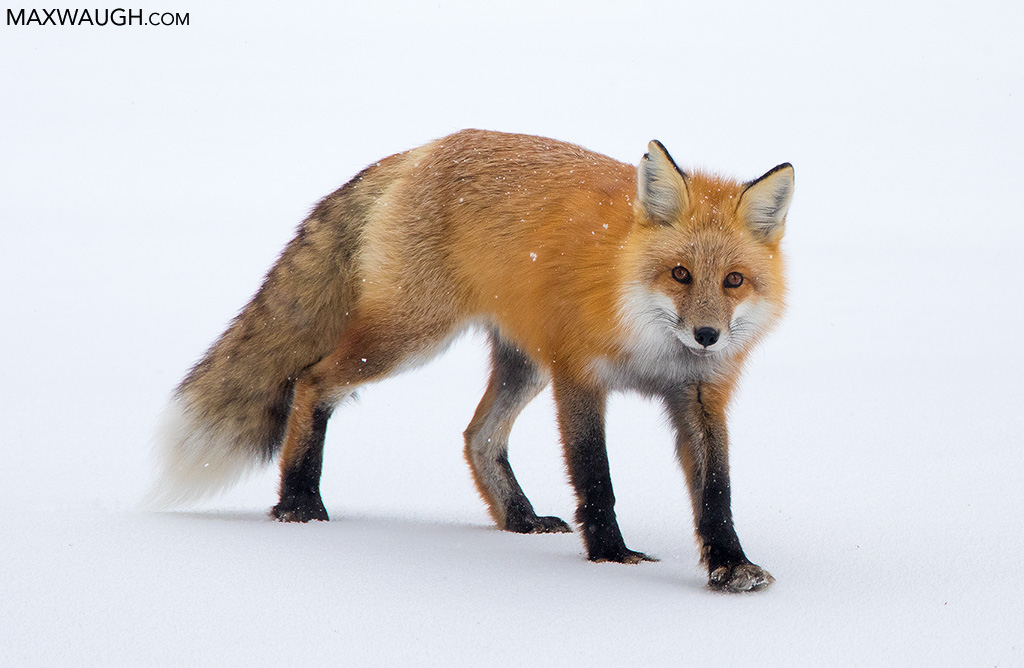 (See more of this and other winter foxes in the photo archive.)

That was a nice bonus.  Unfortunately, the next 36 hours were spent taking care of cabin errands, so aside from some bison and deer grazing on our property and a short walk up to Bridal Falls, I was removed from nature.  On the plus side, I got everything done rather quickly, which meant I had nearly a full day free for park exploration prior to my flight home on Thursday evening.

I wasn’t sure what to expect during my one day of exploration.  Autumn trips can be hit or miss in terms of wildlife, especially if you’re going for bears or wolves.  Luckily, I like other smaller stuff too.  And Yellowstone proved to be active right out of (er, inside?) the gate.

Before sunrise, I had a Great horned owl, coyote, moose… and a guy peeing by his car at Soda Butte.  In 75% of those cases, I wish it had been a little lighter so I could take pictures (you know, I have too many coyote photos already).  By the time I reached Little America, the sun had crested the mountains, in time to photograph some very active rutting pronghorn.  Three different bucks were trying to corral a large herd of females.  The does would be hustled away by one of the males occasionally, before another would run in to chase him off or to perhaps round up the ladies and bring them back to the larger group. 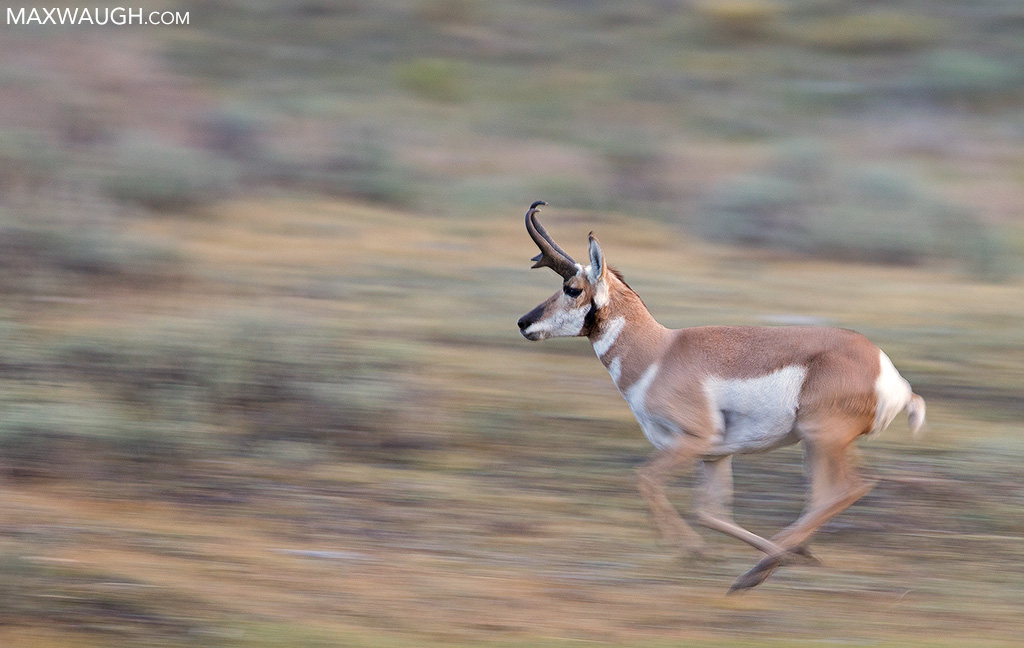 Lots of running, snorting and huffing.  But only one real fight, which didn’t last long.

I did not see the fox at the Picnic Area this time (though a friend mentioned that I missed one going through the Lamar earlier), and proceeded to Roosevelt for a pit stop.  Every time I stop here, I always scan the hillside behind the toilets.  I’ve had a badger pop out here before.  This time, there was no badger.  Instead I got a weasel.  I ran back to the car and grabbed my camera, and was able to return in time for it to reappear.  However, it ran uphill, peered out of some dense scrub briefly (long enough for me to come away with documented proof of the sighting, but that’s about it), and then disappeared over the hill.

My main goal for the day was to head south to try for at least one of the many Great gray owls people had been seeing and photographing this last week.  So I traveled over Dunraven and entered Hayden Valley.  Perched on a berm near Alum Creek were two ravens.  Perhaps the same two ravens I photographed in this spot back in the spring.  I always enjoy photographing ravens, and this elevated perch offers a chance to view them from a different perspective.  After that, I started to notice ravens everywhere, and had to stop for another pair further south in Hayden Valley.  One of them was busy lifting large bison patties to look for bugs underneath. 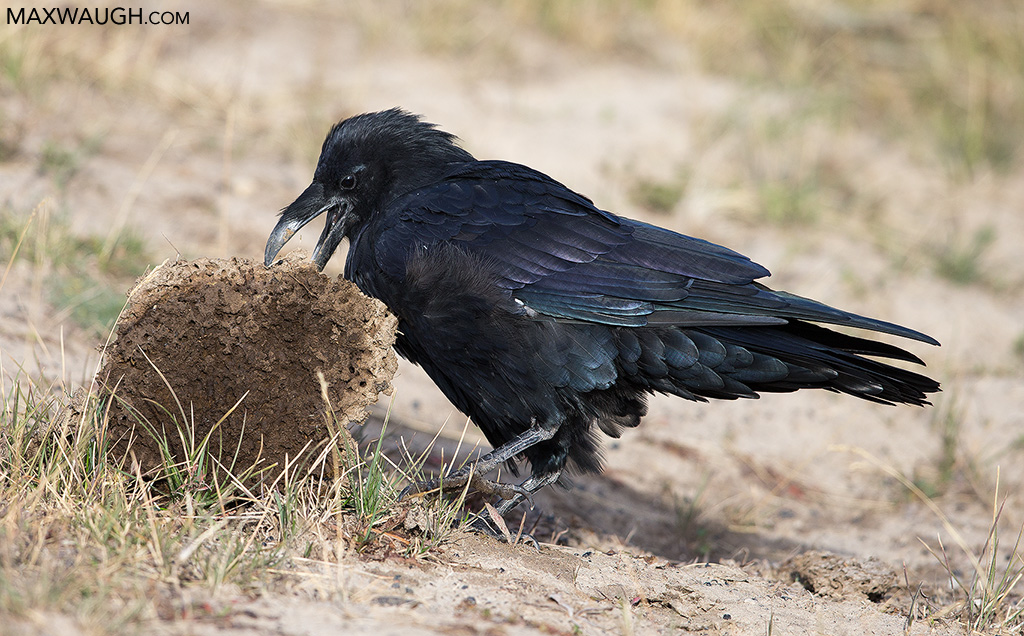 I graduated to larger birds after that.  Though I noticed cars pulled over at the Canyon meadows where we had Great grays in the spring, I wanted to go to Bridge Bay first.  A couple of owls had been putting on a show for photographers there, and though I’d never had luck finding them in the area (I check it multiple times every spring), it seemed to be the most likely bet.  Sure enough, there was a crowd, and a juvenile owl was the center of attention. 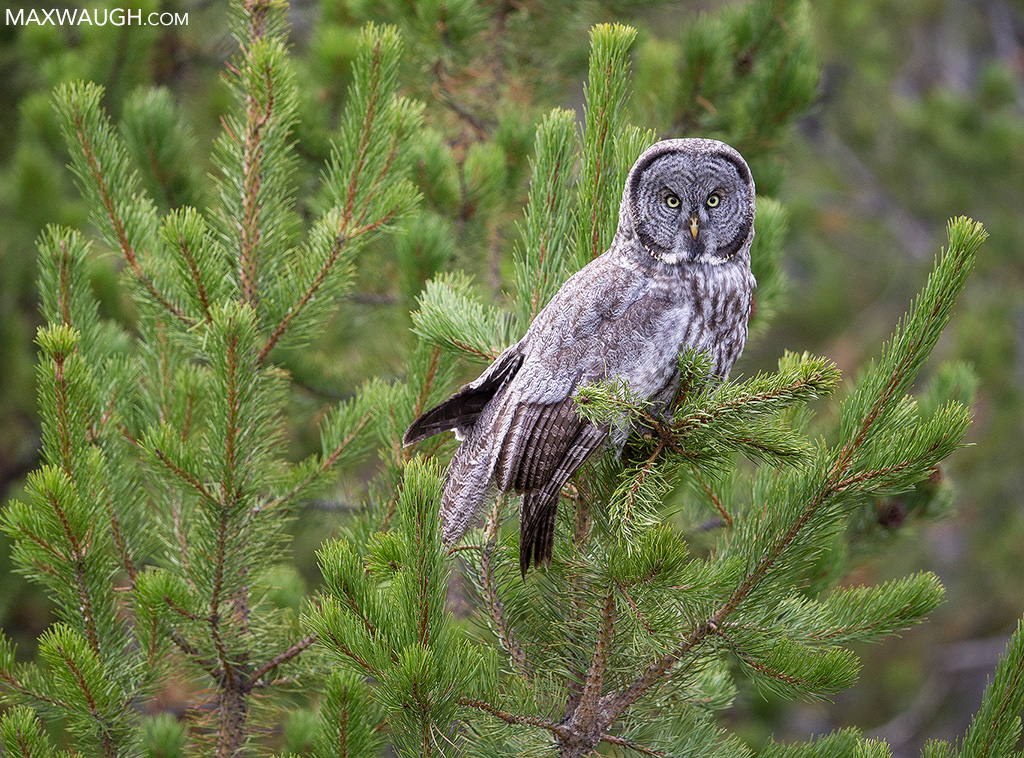 The owl paid the onlookers no heed, and put on an extended show.  Because it was younger, it still hadn’t mastered the art of hunting, and was making many attempts at catching rodents.  This meant there were a lot more opportunities work on flight shots.  I’m pretty sure everyone on hand got something nice featuring this bird in flight.

The owl would often perch right next to the road or fly directly over photographers’ heads.  Rumor had it that it had landed on someone’s lens the day before.

In the midst of all this, a handsome fox appeared out of nowhere and hunted in the campground. 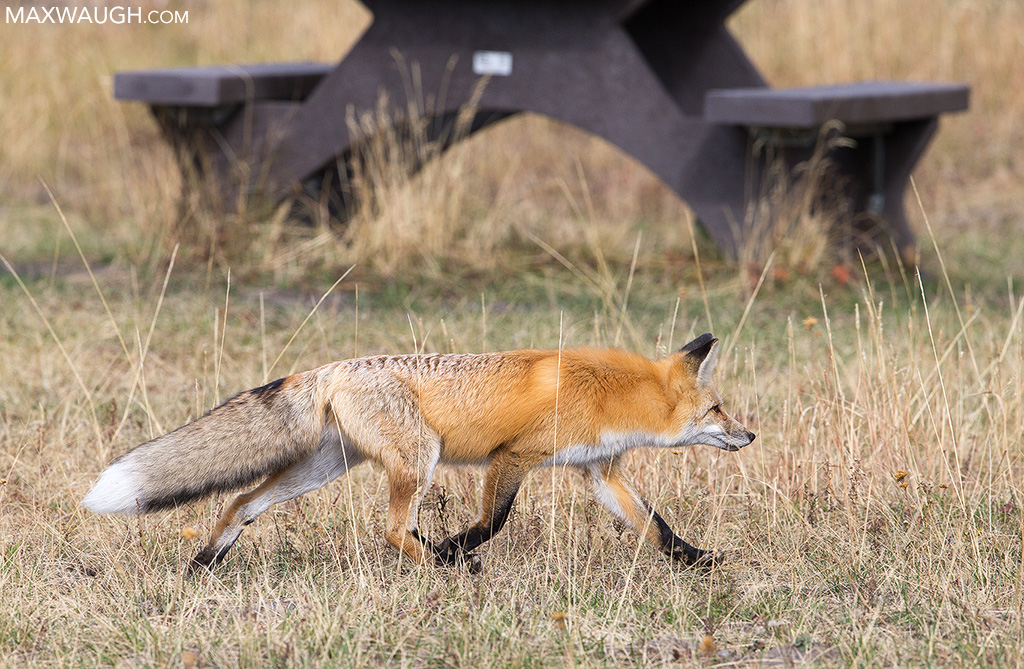 This gave us a short break from the owl, which eventually took off and headed down toward the marina.  After taking a break and chatting with friends for a bit, some of us headed down to the water to see what the owl was up to.  Down there, a volunteer ranger had decided the owl needed space… to the tune of 75-100 yards.  We still got a few photo opportunities, but had to wait until the owl decided to fly back in our direction if we hoped to get any “usable” shots, rather than gray dots.

It was a very nice way to spend a good chunk of the day, but there were still a few more sightings to be had before my departure.  East of Fishing Bridge, several Ruffed grouse scurried across the road. 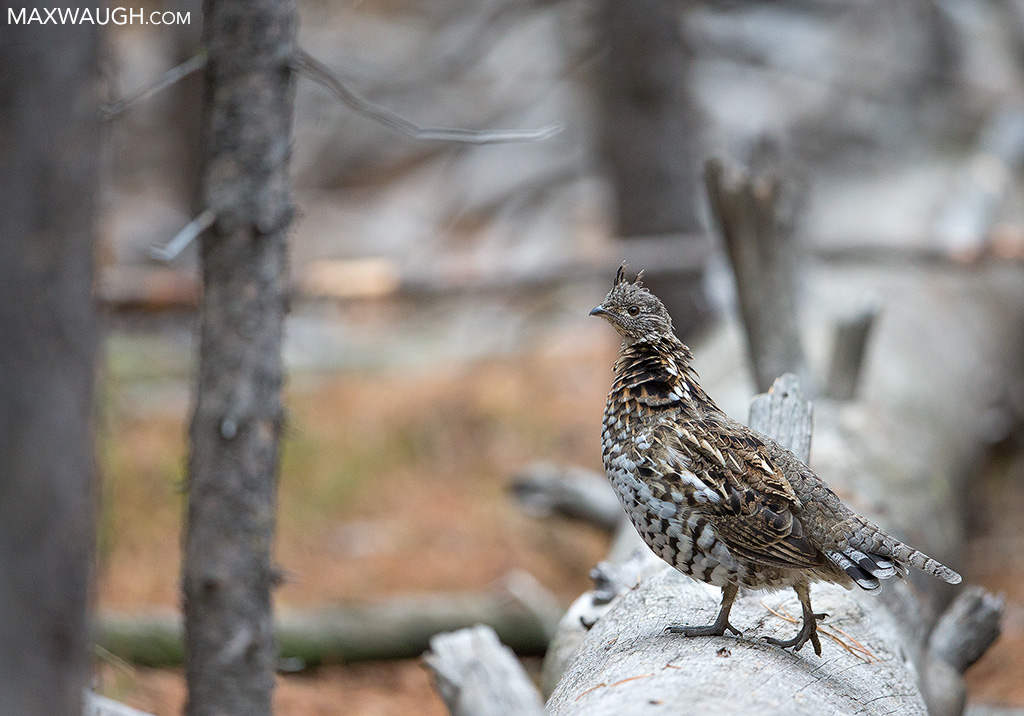 Back in Hayden Valley, some trumpeter swans fed close to the banks of the river.  Canada geese would linger behind each swan, hoping to pick up any scraps the swan had uprooted from the riverbed. 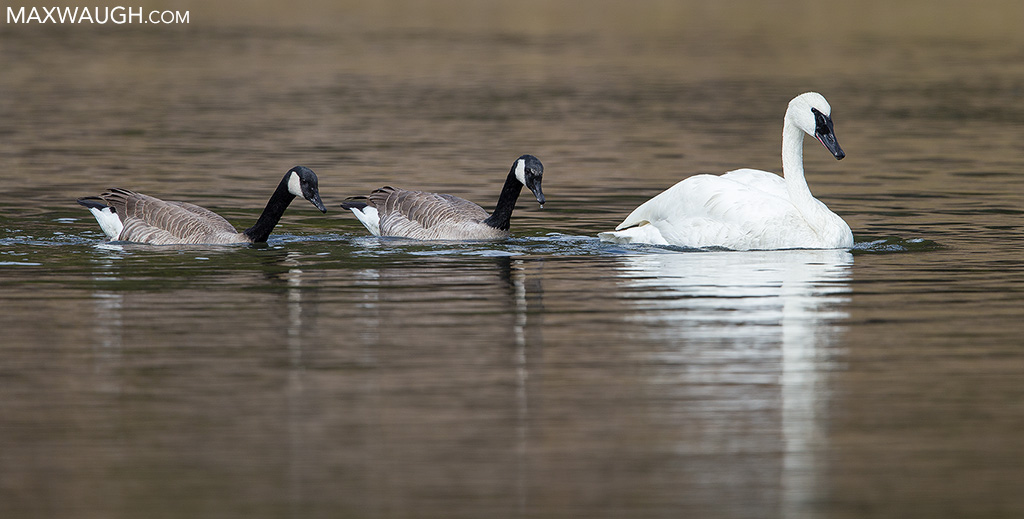 On the other side of Dunraven, a bighorn ram caused a traffic jam at the very bottom of the hill, and a black bear just disappeared over the hillside above Phantom Lake.

For what was essentially one day’s worth of park exploration, this trip would be very hard to beat!  I’m not sure if I will return before spring, so it was nice to have one last hurrah this year.

Note: Apparently the juvenile great gray owl that delighted so many visitors, including myself during this brief excursion, was struck and killed by a vehicle in the last couple days.  This is a somewhat common occurrence for these low-flying, slow-gliding giants, but it serves as another reminder to always watch for wildlife and keep below the speed limit on park roads.