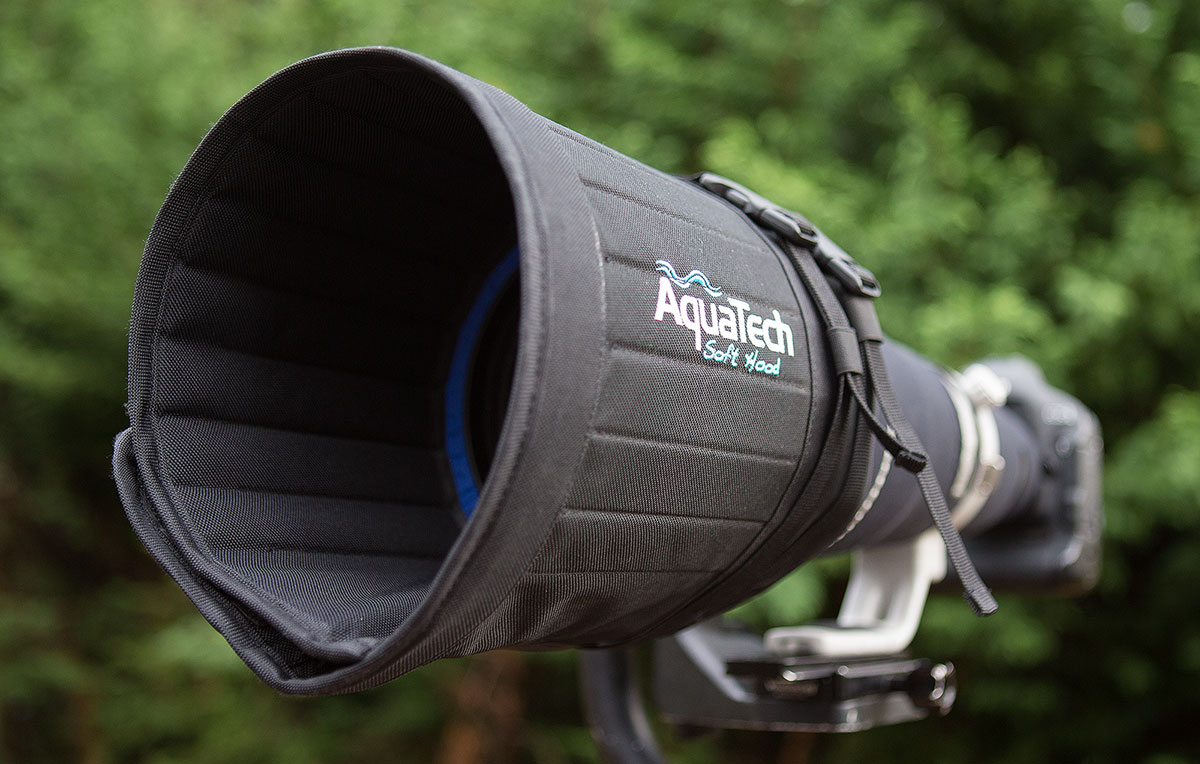 I never seem to pack the same way twice.  Every time I prepare for a trip, I’m faced with a conundrum of which bags to take.  And not just my many camera bags.  For clothes and other trip supplies I have to choose between various duffels, backpacks and suitcases.

Different destinations often require different types of bags.  I can’t roll a wheeled camera bag or suitcase through the Costa Rican jungle.  While living on board a ship in the Great Bear Rainforest I can only bring soft, collapsible bags that can be packed away.  Different flights and airplanes may require more compact bags or packs for my gear.

Despite having a myriad of bag choices, there are a few packing issues that remain consistent.  My tripod, for example, always has to go in checked baggage.  Not due to security concerns.  Most airlines would probably allow me to carry it on.  I simply have too much other fragile electronic gear that needs to be carried on.  Something else that inevitably gets checked is my large lens camera hood.

Today’s camera bags are very well designed, and even the slimmest, smallest packs can fit multiple bodies and lenses, including big glass ranging between 400-600mm.  But the bulky lens hoods are a huge issue.  They’re rigid and wide, usually shoving camera bag compartments so far out that one has trouble fitting any other important items (e.g., cameras!) in neighboring spaces.

Update: After publishing this article, I received a question asking if I can reverse-mount my Canon lens hood when packing.  I can, of course, but remember that width is the issue we’re talking about, not length.  Here’s a photo showing how much room is left for other gear if I try to pack my lens with its original hood in a medium-sized roller. 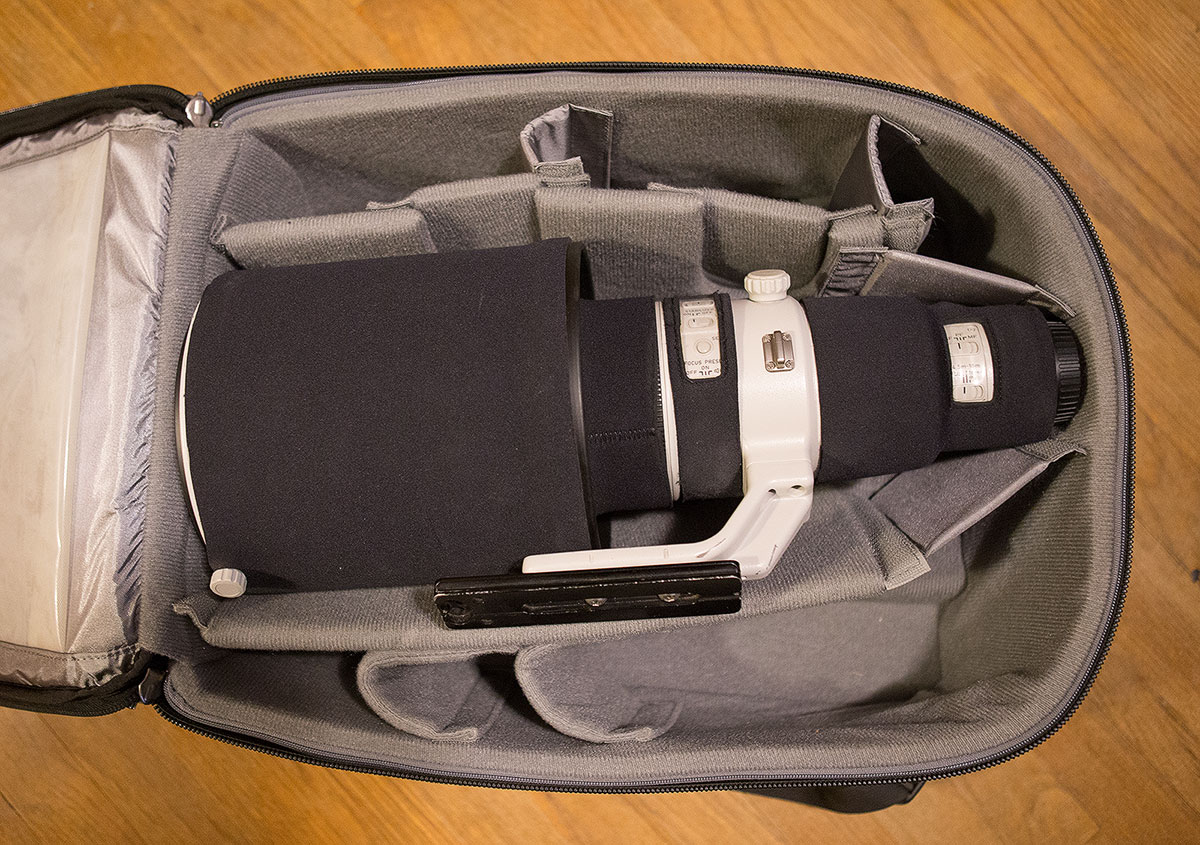 Not a very efficient use of space, is it?  So the big lens hood always goes in my checked baggage.  But it takes up a lot of space there too.  More importantly, I always fret about the hood being damaged in transit.  Thus far, my checked tripods and hoods have survived long hauls in a suitcase or large bag (I always try to pad them with my clothing), but the prospect of replacing a cracked cylindrical piece of plastic overpriced at $500 is not appealing.

The thought of a collapsible, non-rigid large lens hood appealed to me for some time, but it wasn’t until the last couple years that I became aware of some models for sale.  One of the companies that makes them is AquaTech, known more for camera rain covers and wet weather gear.

I finally purchased their large collapsible lens hood this year.  Of the two major brands on the market, the AquaTech Soft Hood was purportedly a bit more sturdy.  Though I wanted collapsibility and portability, I didn’t want something too flimsy, lest it fold and sag while I was shooting.  A lens hood should provide protection from sunlight and the elements without actually interfering with one’s view through the lens, after all.

Because I am now using a 600mm f/4 lens, I had to purchase the largest available model.  The first thing I noticed is that it’s big!  Laid out flat, I mean.  I had hoped that any collapsible hood I’d get would be something I could stuff into my carry-on backpack with the rest of my camera gear.  Unfortunately, the huge circumference of a 600mm f/4 lens means even a collapsible hood is quite long.  And unfortunately this one can’t be folded up.  Which means it still has to be stuffed in my checked luggage.

During football games this year, I was able to slide the Soft Hood into my Think Tank Airport Security bag’s exterior pocket.  This was handy since I used to have my Canon lens hood flopping around loosely on the end of my monopod as I wheeled my bag to the stadium.  I no longer look like a hobo thanks to AquaTech. 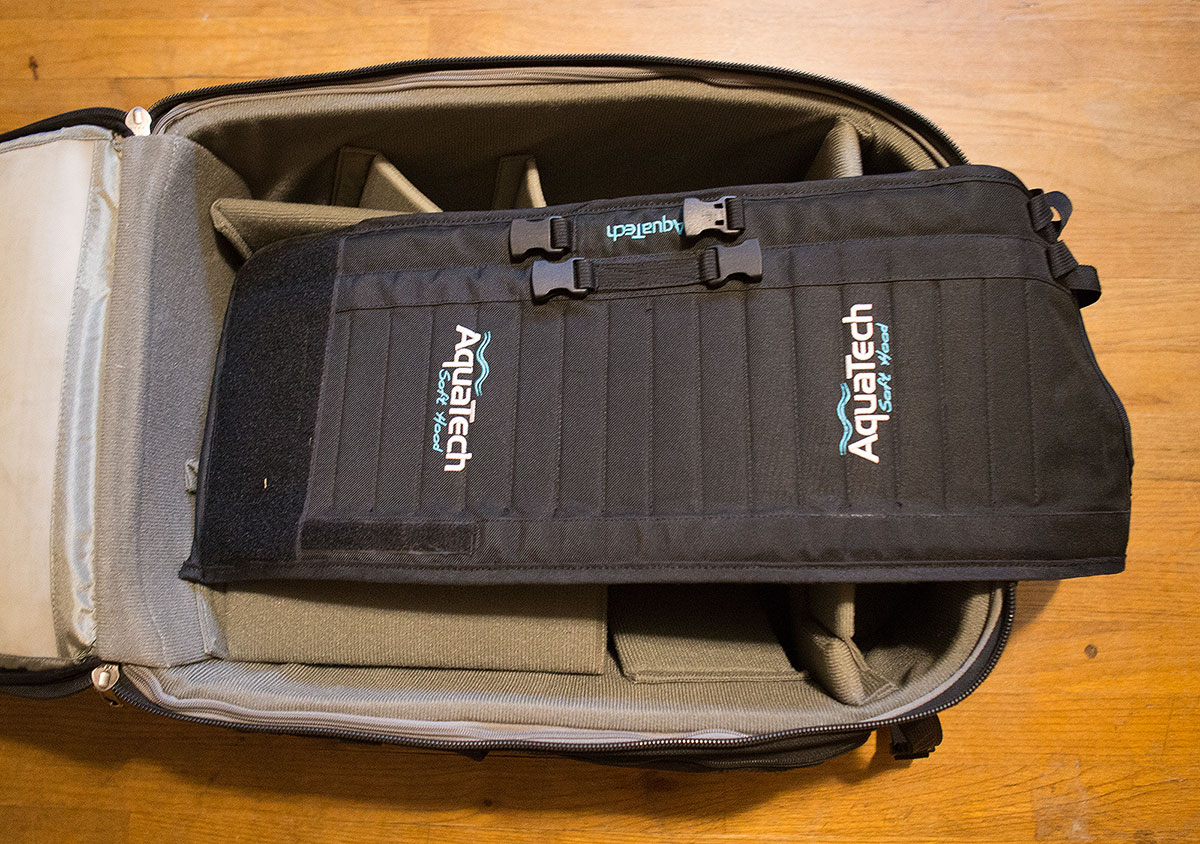 Laid flat, the Soft Hood still won’t fit inside my largest Think Tank roller… and it’s too rigid to fold.

One reason it can’t be folded is because this hood is very sturdy.  Made of heavy duty fabric with what feel like foam and plastic inserts, this is a surprisingly heavy piece of equipment. 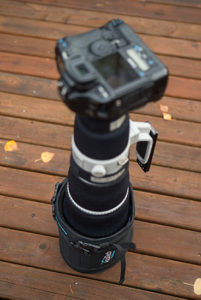 The Soft Hood is rigid and sturdy enough to stand the camera and lens upright in a pinch.

This can be a nice thing.  When the AquaTech hood is on, I can stand my lens up vertically without worrying about the hood crumbling under the weight of my gear.  From time to time it is nice to leave it standing rather than laying the camera and lens on wet or dirty ground (just make sure it’s on an even surface if you stand it up!).

The inside of the hood is lined with a grooved “track” on one side, which fits snugly over the ridge on the end of the lens.  The hood stays together thanks to a large Velcro patch (which barely comes together on the 600) and two sets of tightening belts and clips.

The hood doesn’t fit perfectly.  It’s loose compared to the screw-clamp hood that comes with our lenses, and occasionally I’ve had to shift the hood slightly to make sure it’s mounted straight.  But it stays on.  Thanks to the inner track, it would take quite a bump to knock it off.

Because the hood is made of fabric, this does mean it’s not quite as weather proof as the standard plastic hood.  During a rainy trip to the Great Bear Rainforest, the end of the hood (protruding from under my rain cover) got soaked more than once and took some time to dry out.  This is a minor inconvenience, but may be an issue for those concerned with moisture.

Overall, I felt the AquaTech lens hood was a worthwhile purchase.  Though heavier and a little less portable than I’d hoped, it saves quite a bit of space in my checked bag and negates any fear of damaging a particularly expensive lens component.

Purchases via this link help support my business.  Thank you!

The Perks of Being a Professional Wildlife Photographer
New Photos: Costa Rica 2016 Wildlife