2016 in Review: Sharing Top Work from My Peers

As part of my 2016 retrospective, I’d once again like to highlight the wonderful work done by my peers in the photo industry this year (see 2015’s list here).  I’ve asked some of my fellow photographers to send me one of their favorite images from the past twelve months along with the story behind the photo.  You’ll also find links to their respective “Best Of” galleries.  I hope you’ll take the time to check out all of their marvelous work!

Ken and I have crossed paths shooting wildlife and birds in the Pacific Northwest, including once again this winter.  Ken has published images and leads photo tours in North and Latin America. 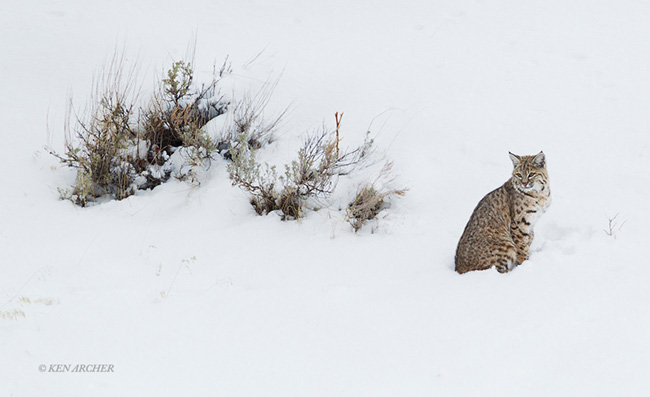 “This is one of the bobcats we followed along the Madison River for two days in Yellowstone last January. Although I managed to get several nice close-ups of it as it hunted and stalked prey along the river. I liked this photo because of it’s seemly serene moment.  While he was trudging through the deep snow headed for the rivers edge, he just stopped for a moment half way down the slight hillside and looked the whole area over. I just liked the simplicity and peaceful feel of the photo.”

See Ken’s favorite images from the past year. 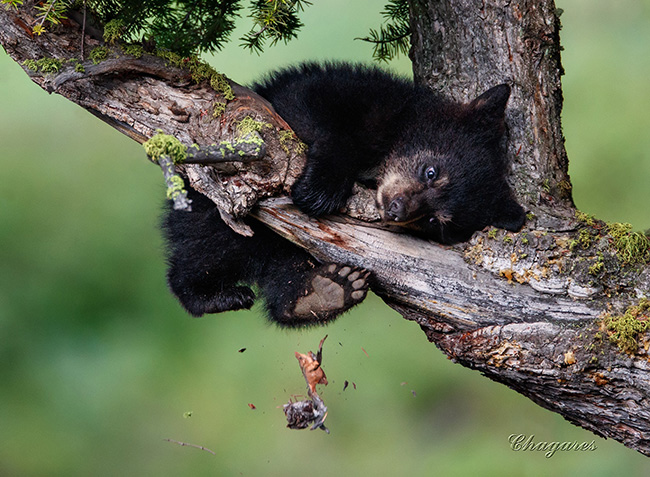 About the photo: Though he didn’t provide a description for this image, Jim and I were actually photographing this scene near each other this spring.  This is one of the adorable black bear cubs that roamed the hillsides and trees in Yellowstone’s northern range.  They’ve got so much more energy than adult bears (or even yearlings) that their antics are great fun to watch and photograph. 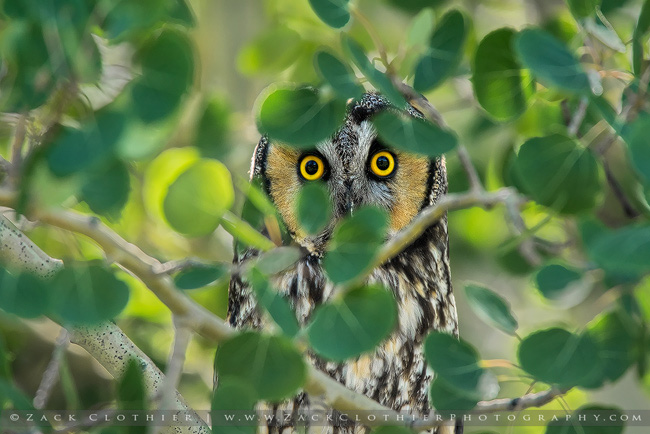 About the photo: “A Long-Eared Owl peers out from dense cover in Yellowstone National Park. The National Audubon Society lists the Long-eared Owl as being a rare species in Yellowstone, so I was beyond thrilled when I came across a breeding pair with at least four fledgings.” 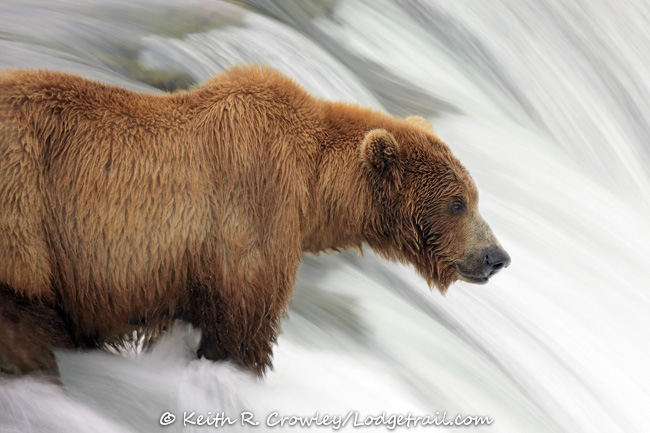 About the photo: “I spent almost all of July in Alaska, and while I knew I had to visit Brooks Falls at Katmai National Park, I also knew that there are literally millions of photos of bears catching salmon there. I wanted to try some long exposures to get the feel of the powerful falls juxtaposed with the big, beautiful bears. I took somewhere around 1100 long-exposure shots varying between 1/16 second up to about 3 full seconds. It takes some time produce that many long-exposures. It’s not like average wildlife photo ops where I’m spraying and praying at 12 frames-per-second. And the bear has to remain absolutely still for it to work out. Of those 1100 frames, there were four I was satisfied with. This one is the best.”

Morkel has been scouring the African continent for the last several years bringing us some wonderful scenes of its wildlife and landscapes.  He’s landed some remarkable images of “the hunt,” including the unique scene below. 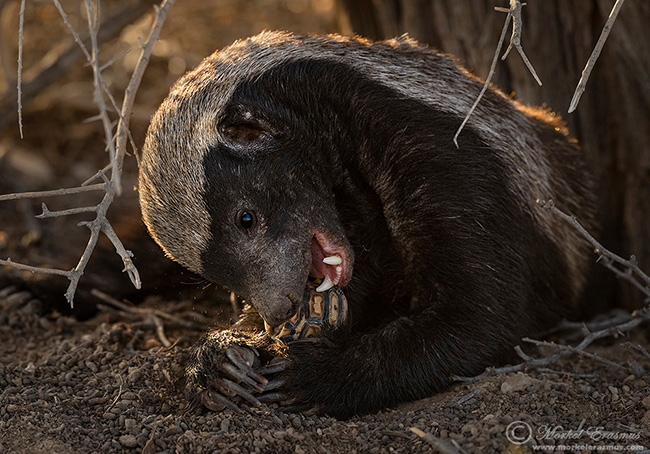 About the photo: “At the start of 2016, my family and I braved camping in the Kalahari during a nationwide heat-wave. With temperatures reaching 50 degrees Celcius before 11am on most days, early morning was our best bet to find interesting sightings of the local wildlife. There are few animals higher on my wish list to see in this area than the iconic and legendary honey badger. My joy was great when I came across this male searching for food early one morning. Before I could blink my eyes, he had dug up a young leopard tortoise right next to my vehicle and proceeded to try and find a way to devour it. It sadly did not end well for the tortoise as the badger was quite resourceful (it seems he does this regularly), though it took him a while to break through his quarry’s tough outer defence.”

Steve is an award-winning nature photographer who is fortunate to capture some wonderful scenes from the Greater Yellowstone Ecosystem, which he calls home.  Steve and I collaborated on this year’s Yellowstone Wolves calendar. 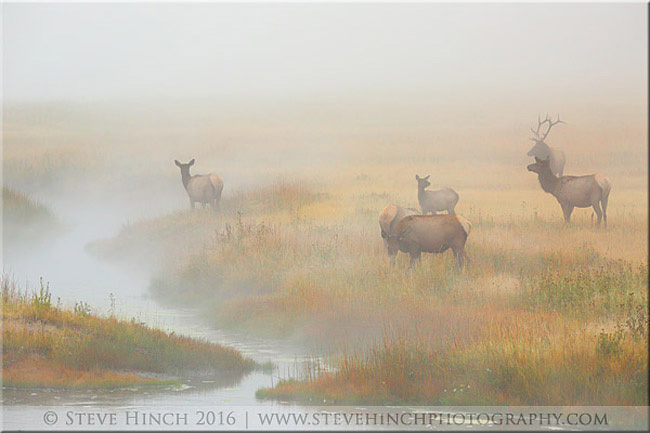 About the photo: “Meadow in the Mist is one of those photos that you hope will come out nice but at the moment you take it you can’t be sure.  Why?  Because it was so foggy and getting the exposure correct was vital in coming away with an acceptable image.  Heavy fog will often cause the camera to underexpose the scene, so it’s important to overexpose when faced with a situation such as this one.  There are a few things I wish were a bit different in this image, so as better separation among a few of the elk, especially the bull, but otherwise, the fog and autumn colors made this one a favorite for me this year.” 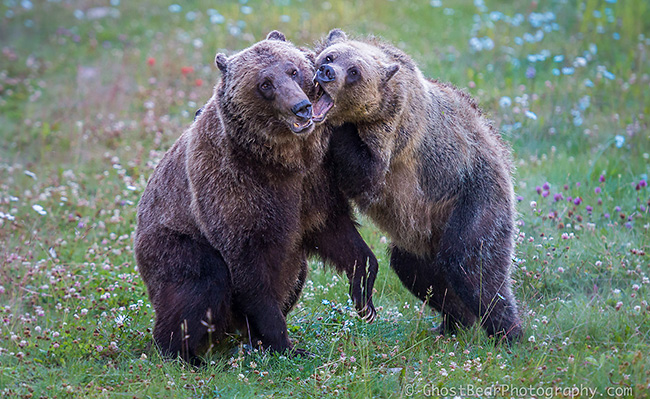 About the photo: “With a record buffaloberry crop, grizzly bears in the Canadian Rockies descended to the valley bottoms on mass to stock up on extra calories in the summer of 2016. What we didn’t expect was to observe several unrelated grizzlies spend more than a week interacting with one another within the friendly confines of Banff’s Bow Valley. The opportunity to document this unusual behaviour – capped off by an hour-long play fest one early morning between these two bears – was as breathtaking as it was myth-shattering, offering a reminder that we, as a society, still have much to learn about the complex lives of the great bears.”

The Launstein family is quite an accomplished group.  John is a long-time photographer who has guided his children onto successful paths in the field.  Jenaya, is has won multiple youth photography awards, while borther Josiah is a fellow award winner and was recently featured in this video campaign for Nikon.  Collectively, they opened a wildlife photo gallery in Alberta this past year. 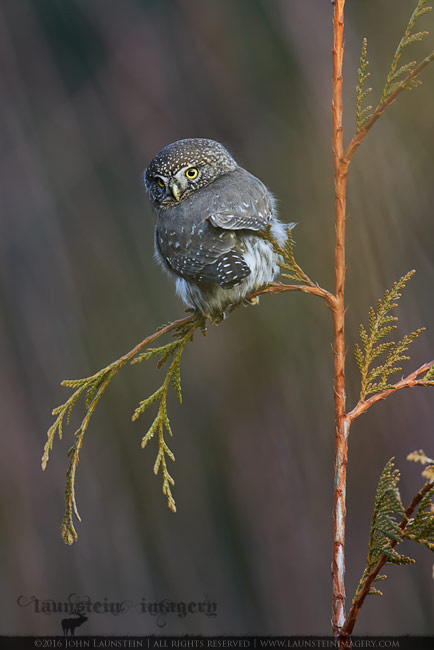 About the photo: “I’m not sure that this is my choice for top image of the year, but it sure is one of my favourite experiences! I had the privilege of photographing this handsome Northern Pygmy Owl alongside my wildlife-photographer-kids as the sun set in the mountains of British Columbia last year, and when he chose to perch on this small cedar sapling, I worked out this composition through the surrounding willows to create something of a painterly effect to the portrait. My favourite part was hearing the excitement in the hushed exclamations of my kids as this little owl hunted its way across the clearing. What happened next, however, we were definitely not prepared for (read the story behind one of Jenaya’s favourites from the year)! :)” 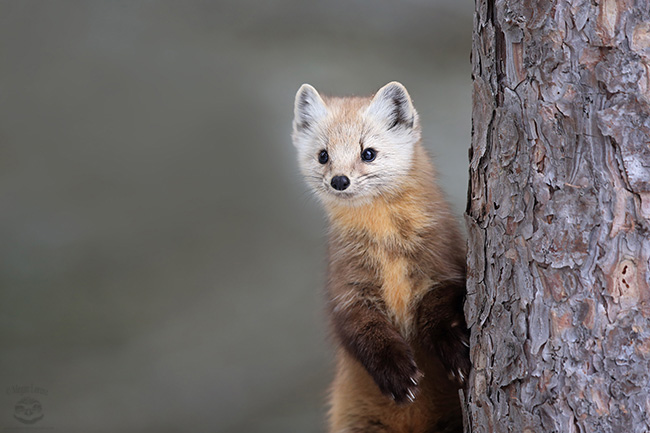 About the photo: Megan’s had great success photographing the elusive (and adorable) American pine marten in Algonquin Provincial Park.

Mario continues to produce fantastic colorful images from the African continent.  I had a tough time choosing a favorite from his Best Of collection this year, but ultimately he obliged me by sending this lovely elephantscape. 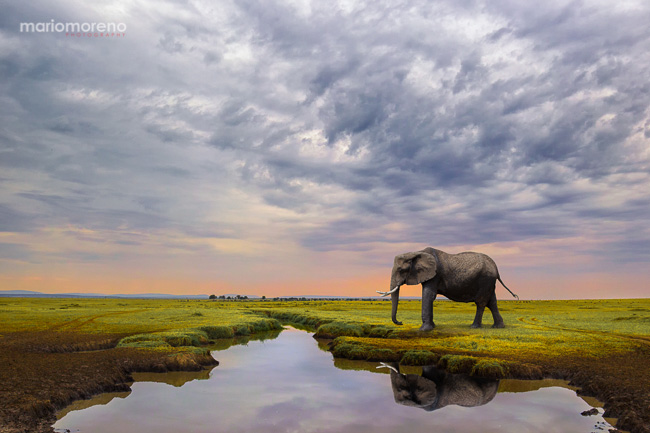 About the photo: “A female Elephant approaches a stream in the Maasai Mara National Reserve. Used 3 exposures blended in Photoshop to capture the dynamic range.”

Sam and I have known each other via our Yellowstone adventures.  A couple years ago we collaborated on a wolf calendar.  Sam spends a good chunk of the year exploring and photographing the Rocky Mountains, particularly in Wyoming and Colorado.  He specializes in large North American mammals but often manages to capture intimate portraits of smaller predators, owls and many of the other species that inhabit the American west. 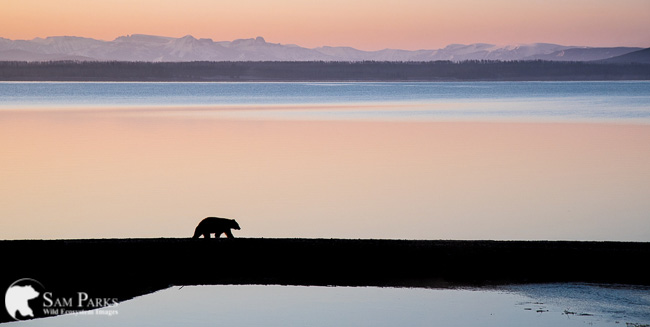 About the photo: “This big old black bear was not the species of bear I was expecting to see on this particular morning. For the most part, the Yellowstone Lake area is dominated by grizzlies and black bears are rare. The ones you do see are big; they have to be to compete with the grizzlies. This big cinnamon boar was no exception and he was kind enough to amble on by on a gravel bar on his way to fish a nearby trout spawning stream just as the sky began to glow at sunrise. Yellowstone National Park, Wyoming.”

Kate and Adam took the bold step of moving from the upper Midwest out to the Rockies to pursue their dream of wildlife photography, and it’s been paying off with lots of successful adventures in Utah, Wyoming and Montana. 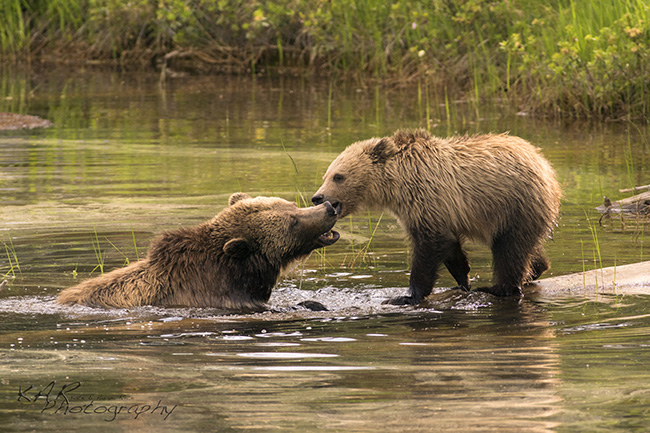 About the photo: I recall Kate and Adam talking about this moment, featuring a popular grizzly sow and her cub sharing bath time in Yellowstone National Park.  Seeing such interaction between a mother and cub is always a treat!

See Kate and Adam’s ten favorite moments of the year.

Ashleigh is a young photographer who has been leaving her mark on the wildlife photography world with award-winning photographs of North American wildlife.  We finally met in Yellowstone earlier this year, where we were both on the lookout for red foxes.  So naturally, I asked her to show off one of her best fox shots of the year. 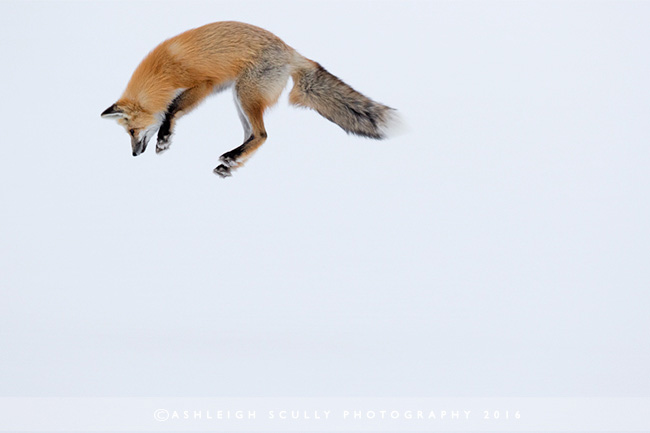 About the photo: “A red fox at the top of its arc, leaping for prey buried deep underneath the frozen snowpack of the Lamar Valley in Yellowstone National Park, WY.”

Dave covers sporting events in the Pacific Northwest for various publications.  I know him through my work in Husky Football, but Dave travels around covering other Pac-12 schools as well. 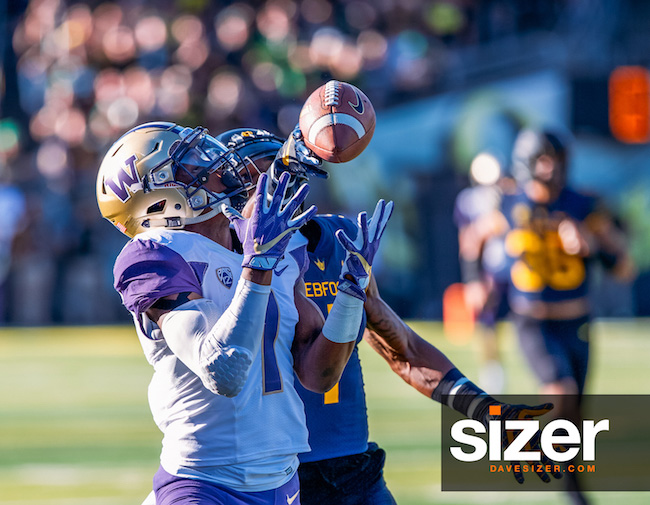 About the photo: Oregon’s Arrion Springs deflects the ball away from Washington’s John Ross.

More Best of 2016 Collections from My Peers:

Mark Rebilas: Mark is counting down some of his favorite images from various sports he covered in 2016.

Here are more articles and photos from my look back at 2016:

Not Quite My Best Photos of the Year

The Best in Literature and Entertainment from 2016

Check back January 10th for my own Best of 2016 selections!

Best of 2016: Favorite Photos and Moments of the Year
2016 in Review: Not Quite the Best of the Year

Leave a reply to Mike Click here to cancel the reply