In the early days of this blog, I wrote an article detailing the subtle differences between otters, beavers and muskrats.  To date, it’s still the most popular piece I’ve ever written, and I’m long overdue in writing about my next “Animal ID Throwdown.”

This time, I’ll focus on two species commonly confused with each other in Yellowstone, the coyote and the gray wolf.  Yellowstone’s largest two canid species (the other is the red fox) often get misidentified by park visitors, most often by folks that are so eager to see a wolf that they ID the first coyote they see as such.  It’s a common mistake, and even I have mistaken a thick, burly coyote in its winter coat as possibly being a wolf.  But there are a few traits that differentiate the two, and you can use these clues to make more accurate identifications next time you’re in the park.

Let’s get an easy comparison out of the way.  If you’re fortunate to see these two species together, you’ll notice the major obvious difference: size. 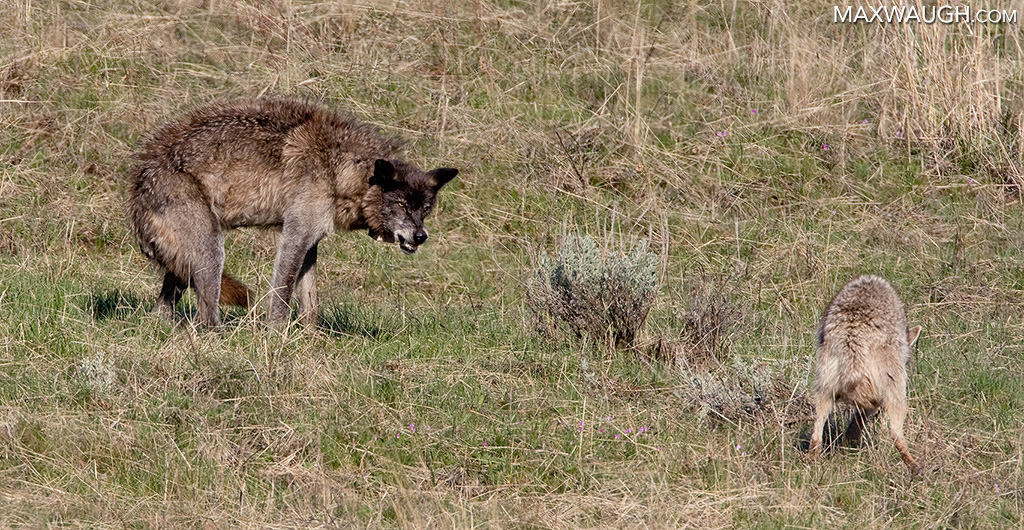 This was the only time I’ve photographed a wolf and coyote in the same frame.  The images aren’t great, but they do illustrate the obvious size difference.  The wolf is much larger… which is why that coyote is running away and why you typically don’t see coyotes lingering when wolves are in the area.  The two are natural enemies, and though coyotes will take advantage of wolf kills (when the wolves aren’t around), they’re usually being bullied, harried and sometimes killed by their larger cousins.  If wolves discover an active coyote den, they will kill the pups, since they still see the smaller coyote as competition.

I’m going to assume that most of your wolf or coyote sightings won’t come with the benefit of having the other species nearby, so the size difference won’t be obvious.  That’s when I start talking about “relative” sizes and body proportions, something that’s a bit harder to visualize.  But don’t worry!  There’s another readily apparent visual cue that can help you with your ID: color.

When it comes to fur color, coyotes come fairly standard: beige, tan, light to medium brown, blonde… and maybe a bit of orange mixed in.  These are pretty typical examples of what coyotes look like in their winter and spring/summer coats: 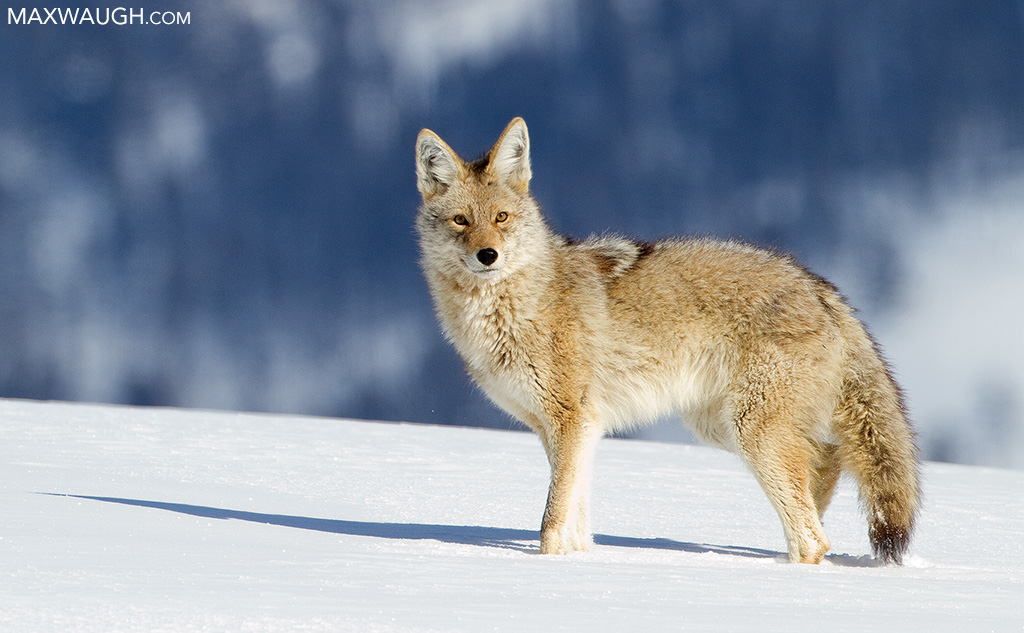 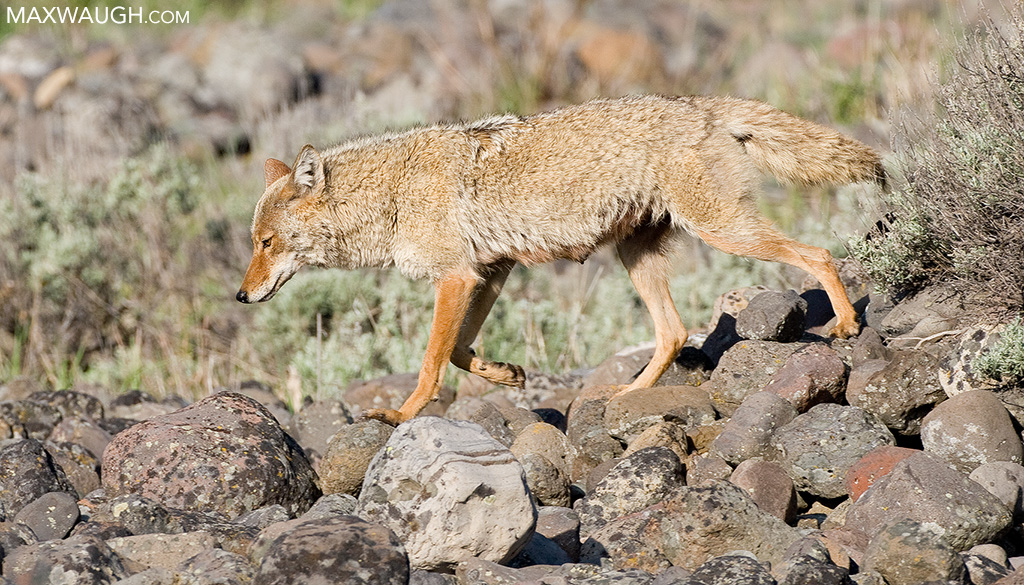 Gray wolves (the official common name of the North American species), on the other hand, aren’t always gray.  Sometimes they are a lighter brown or beige color… but they also come in other colors that differentiate them from coyotes.  If you see a large white or black canid, you have a pretty good idea of what you’re staring at. 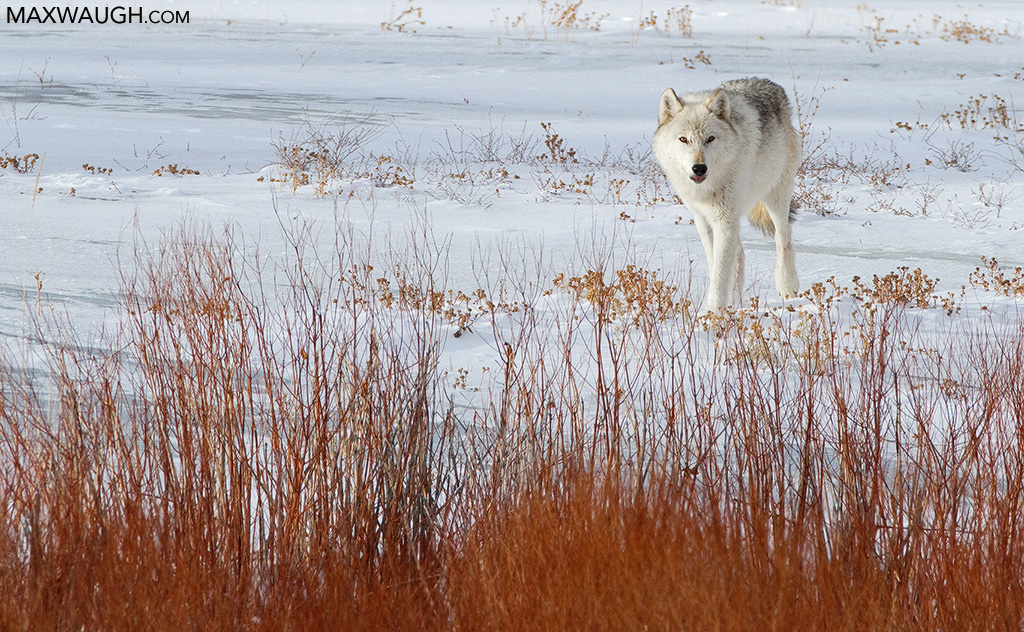 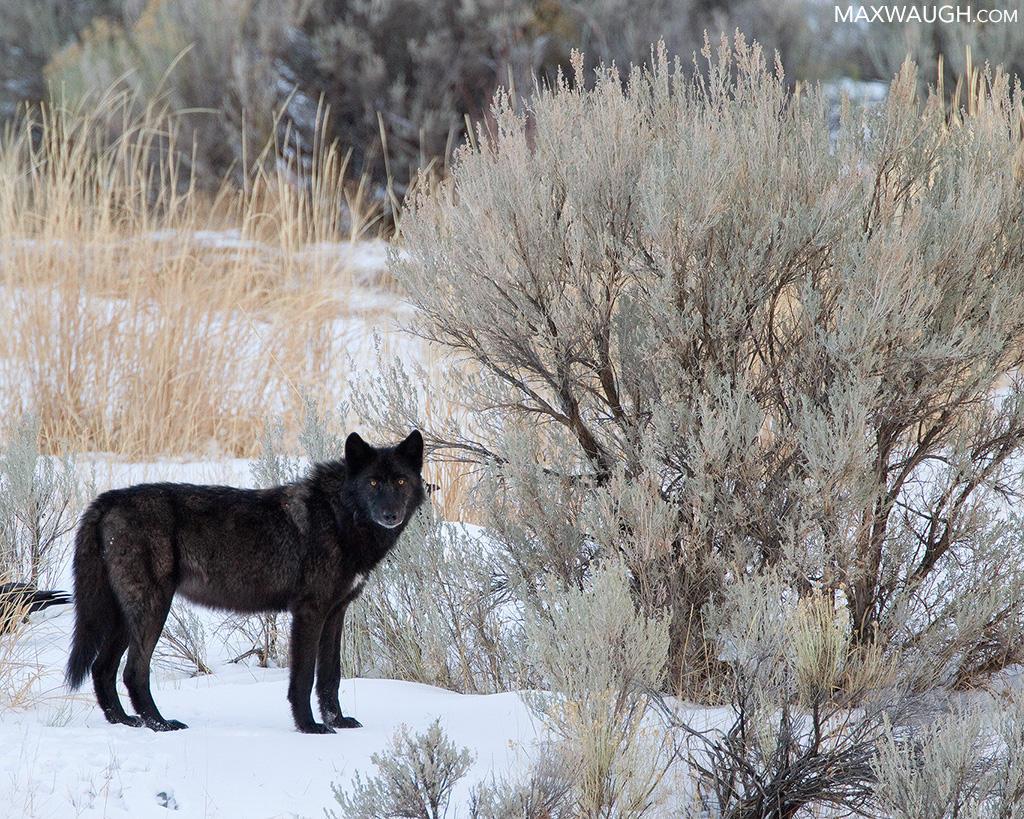 But yeah, sometimes gray wolves are gray too. 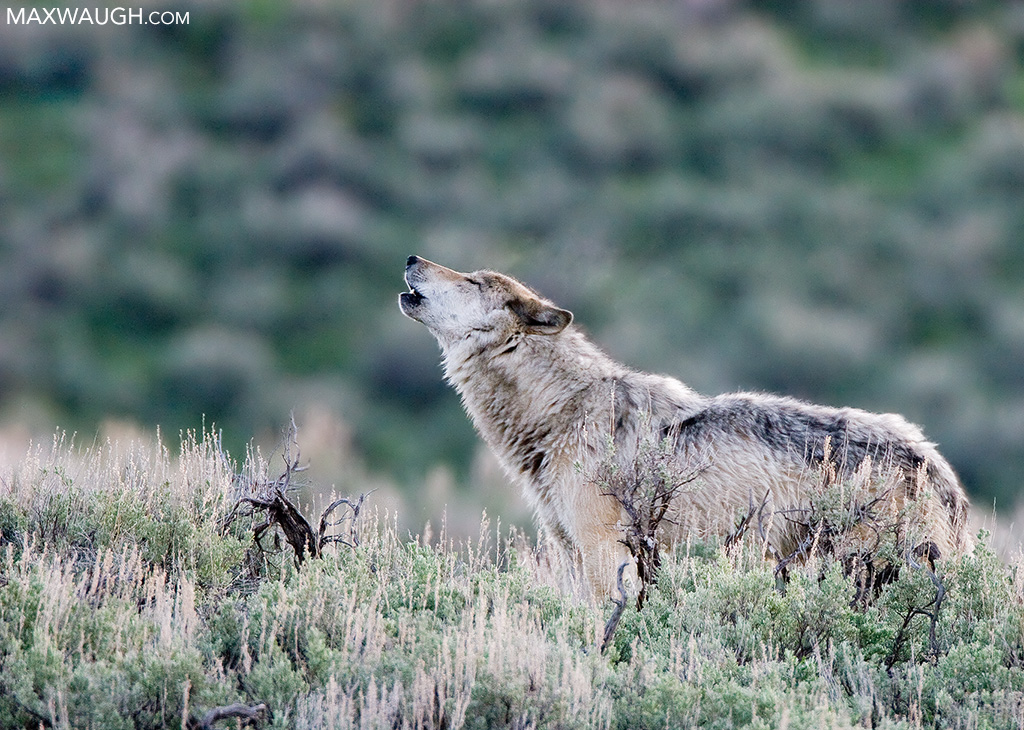 In Yellowstone, gray and black are the most common wolf colors.  Nearly-white wolves are pretty rare.  Sometimes you get a mix.  I’ve seen blondish wolves with black faces.  Older wolves that used to be black often turn silver, with some hints of darker fur here and there.

Remember the orange tones on the face and legs of the summer coyote above?  Orange is a pretty good indicator that you’re looking at a coyote, but not always.  Wolves along the Pacific coast of North America sometimes sport hints of orange fur and a mix of beige and brownish tones that can look similar to a coyote.  Here’s a coastal wolf from British Columbia.  Its fur is generally a bit warmer in tone (especially in that tail) than most of the gray wolves I’ve seen in Yellowstone. 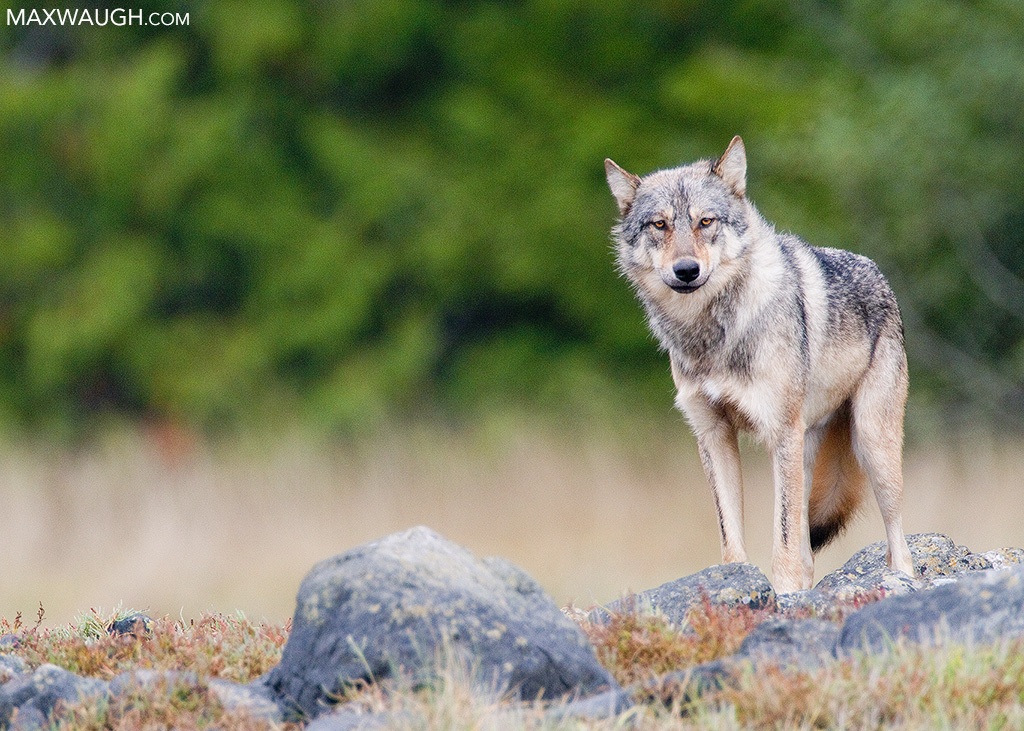 So here’s where things get a bit trickier.  You may have a sort of beige/tan/grayish wolf that looks very similar in color to a coyote.  Or perhaps a coyote in its winter coat that appears a bit grayish.  These are common occurrences and fur color isn’t helping you out.  That’s when you may need to look at specific body parts for clues.  I mentioned “relative size” before, and it’s something I study when identifying the characteristics that differentiate similar species.

First, let’s look at the legs.  Wolves have loooong legs relative to their bodies. 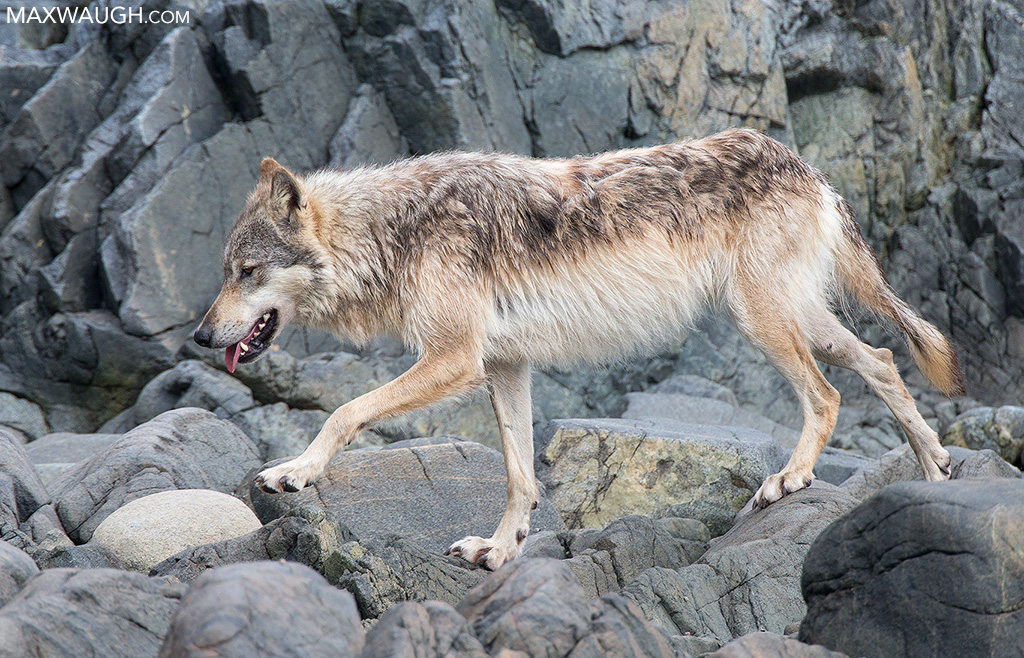 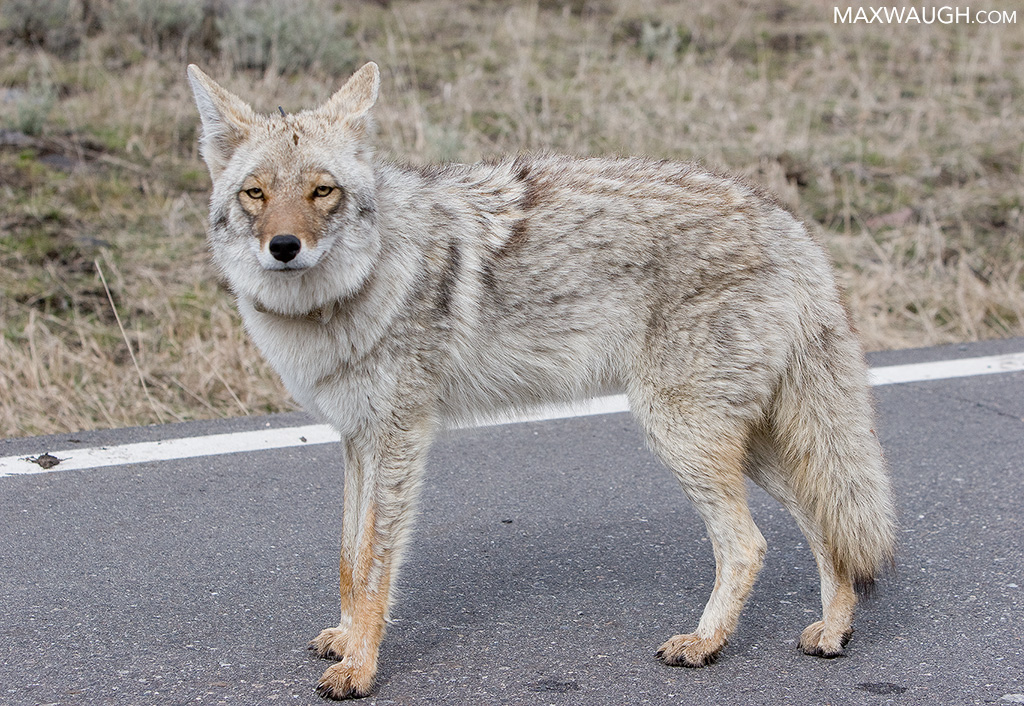 By the way, did you notice the feet?  Wolves have huge paws.  I know you won’t normally have time to look at the feet when one of these animals trots by, but if you are fortunate to find tracks, the size may be a giveaway.  Here are wolf and coyote tracks side by side.  Can you guess who left each track? 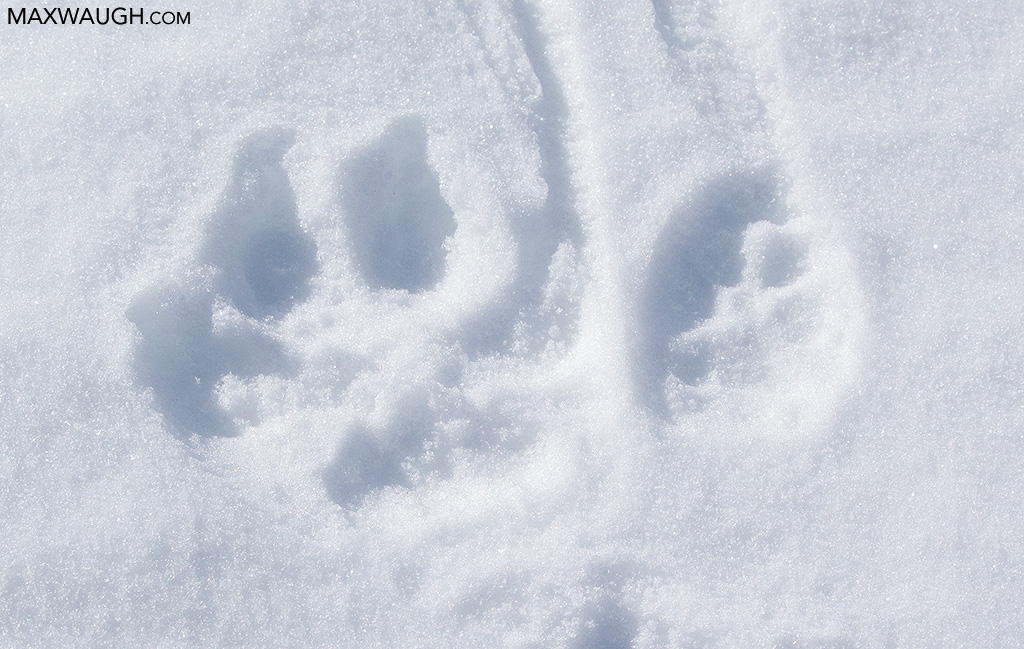 There are other physical characteristics that offer clues.  I often look at the head.  How big are the ears relative to the head?  A coyote has pretty large ears, which aid it in listening for small, elusive prey beneath the sagebrush, grass and snow. 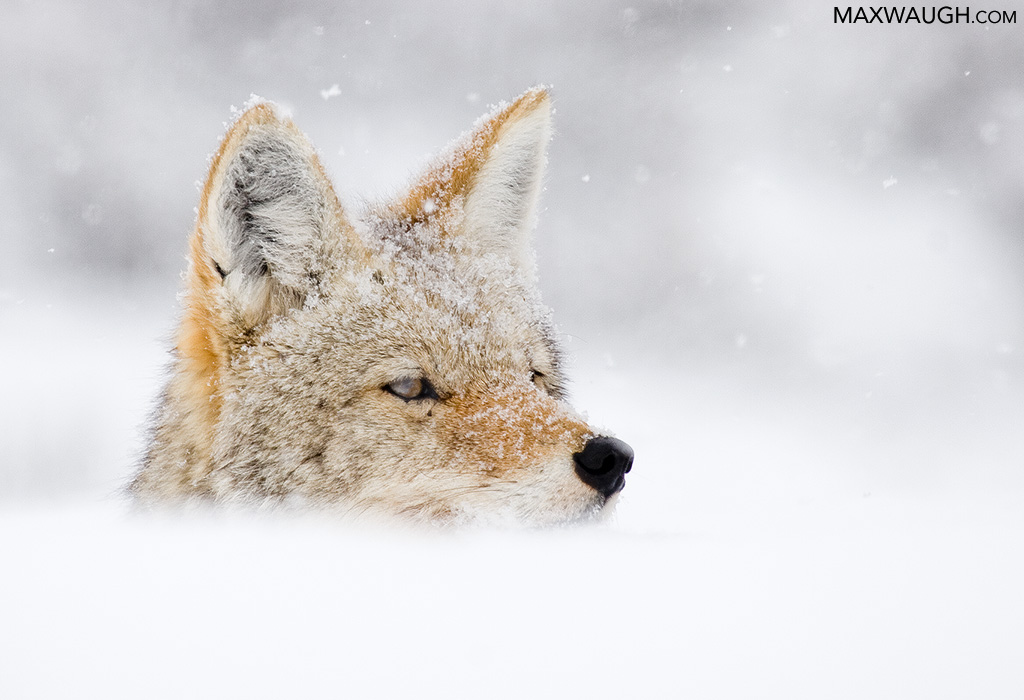 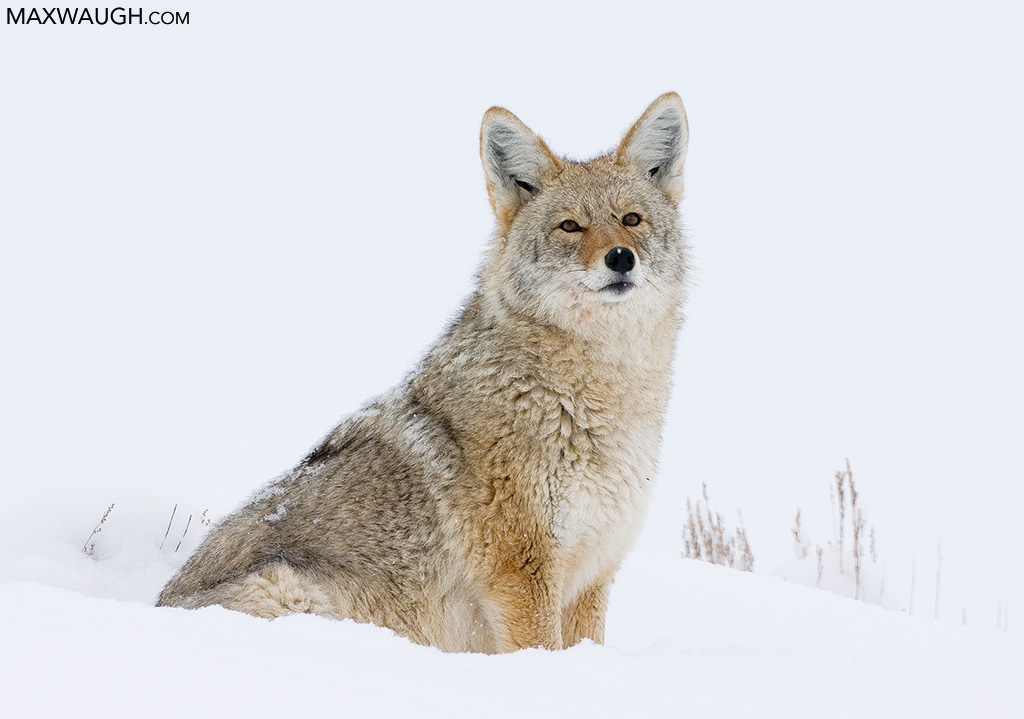 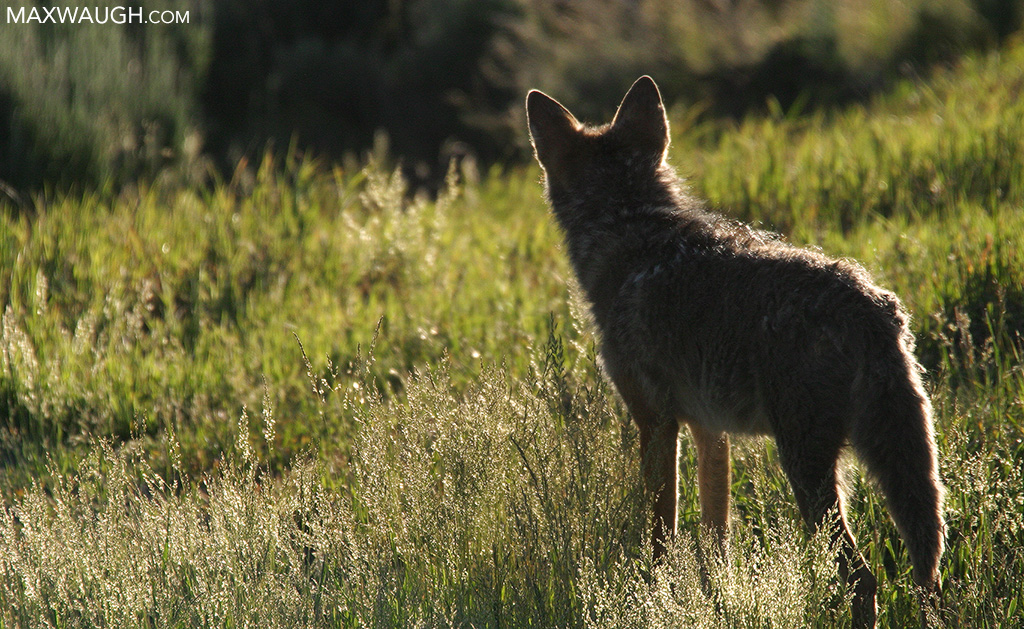 The wolf, on the other hand, does not have to rely on its hearing quite as much, and therefore has not developed longer ears.  They’re a bit more compact. 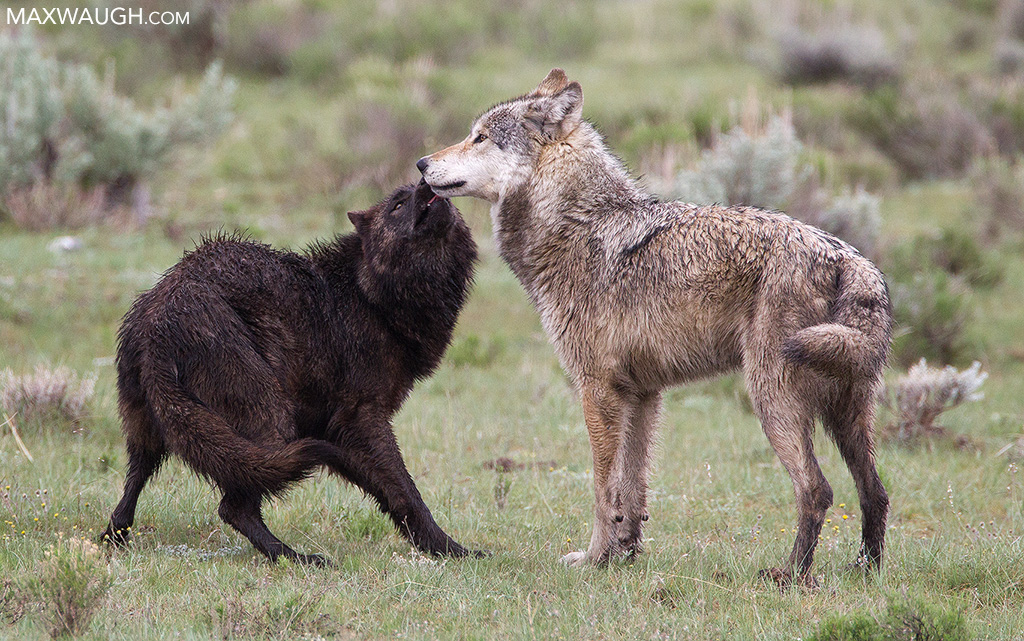 Something else to look for around the head and face is the length of the snout.  Coyotes are generally a bit longer and leaner around the nose and mouth. 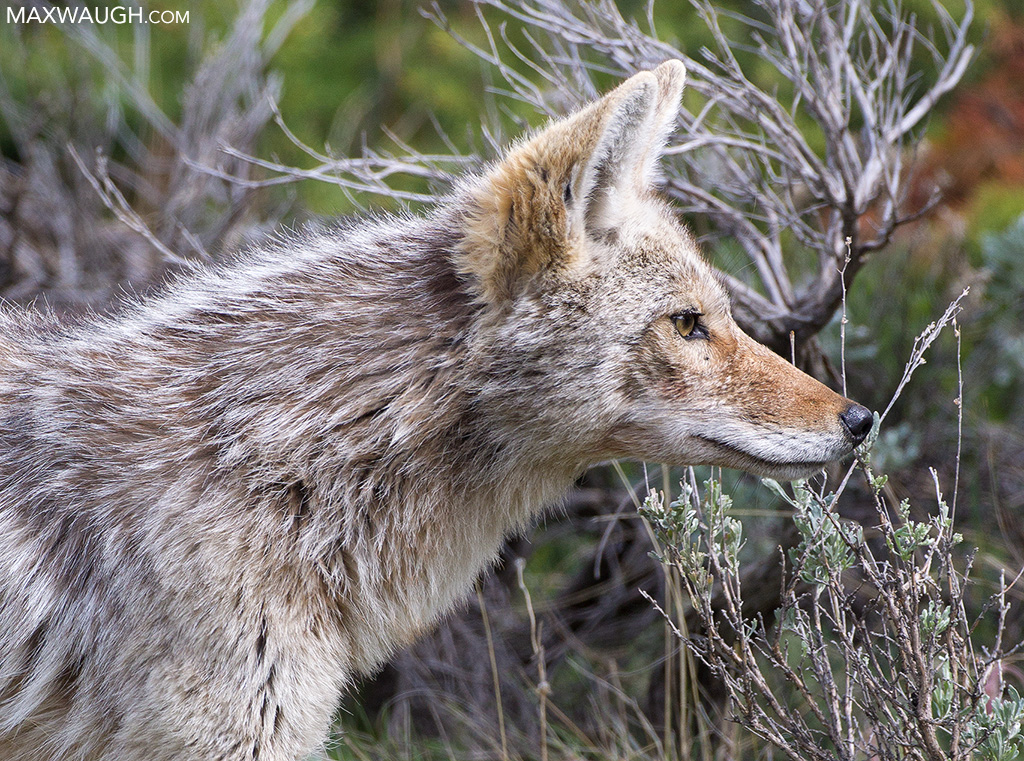 When it comes to overall body shape and size, coyotes usually look more compact.  Their tails may be a bit bushier (though not quite as poofy as a fox tail) and longer relative to the body, but because they lack those long legs their movement is also a bit more fast and compact… a quick scurrying trot as opposed to longer loping strides.

There are a few other clues that may help.  The actions of the canid or whom it’s doing things with may tip you off.  We all know wolves like to roam in packs, for example.  But so do coyotes!  And it’s not uncommon to see a lone wolf.  In fact, many close wolf encounters only involve one or two wolves.  That’s been the case with most of my close wolf encounters, in which an individual or pair happens to be crossing the road when I drove or walked by.

Of course, when wolves do their family thing, they can do it in big groups.  Here’s only half of a group of sixteen wolves my clients and I witnessed in Yellowstone’s Lamar Valley last winter.

Coyotes most frequently travel alone or in pairs, but they have been seen in larger packs of 4-6 individuals.  That’s not too common, except, ironically, when wolves are around.  Yellowstone’s coyotes began operating in a larger pack structure more frequently after wolves were reintroduced in 1995.

Vocalizations can sometimes help alert you to the presence of canids.  Wolves are famous howlers, but coyotes howl too!  There’s a big difference in their songs, mainly in their pitch.  A wolf howl is often low and mournful.  A coyote’s howl is high-pitched, sometimes accompanied by yipping or squeaking.

Another behavior that offers clues is hunting.  Wolves operate well in groups, often pursuing larger prey such as deer, elk and even bison.  Coyotes will usually concentrate on much smaller prey (though they have been known to kill bighorn sheep).  Ground squirrels, voles, and other rodents are usually on the coyote’s menu.

When coyotes hunt for rodents in sage, grass and snow, they behave very similarly to foxes.  It’s often a waiting game, and hearing plays a large role.  While wolves are usually fanning out and chasing an ungulate, sometimes trying to separate it from its herd, coyotes are circling, stopping, listening and pouncing.

The pouncing part, or “mousing,” is the big leap that occurs when a coyote has honed in on its target and is attempting a surprise attack.

Like the fox, coyotes take advantage of their smaller size to make these leaps and surprise attacks.  Believe it or not, wolves will mouse in rare instances (usually in desperate times, or perhaps if a young wolf is curious about smaller prey), but in those cases they often just stand up on their hind legs and hammer down with their front paws rather than take long acrobatic leaps.

So if you see a brownish predator mousing, it’s likely a coyote.

Though I guess it could be a badger… 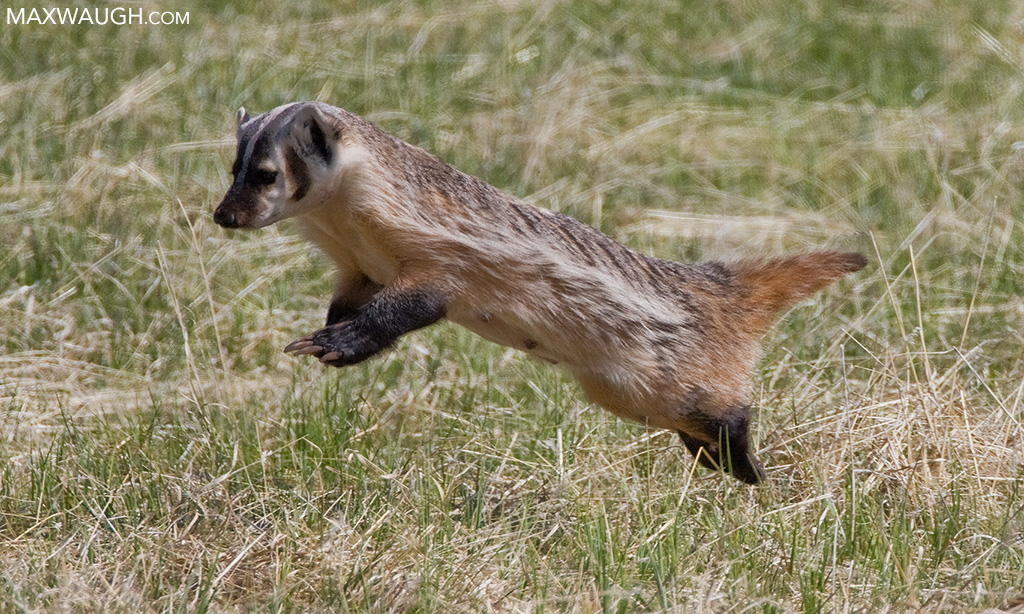 Okay, so now you know the basics and should be able to identify a coyote and a wolf, even when they’re not standing side by side.  But just in case, ask yourself the following questions:

– Is the animal traveling in a large pack?
– Is it black, white or grayish?
– Does it have long legs and big feet?
– Is it hunting large prey such as deer or elk?
– Is its howl low and mournful?

– Is the animal beige or tan, perhaps with some spots of orangish fur?
– Is the body compact?
– Are the ears and snout long relative to the size of its head?
– Is it mousing?
– Is its call accompanied by some high-pitched yipping?

As a post-script, I’d like to mention that the third of Yellowstone’s canid species, the red fox, does occasionally get confused with the coyote (four of the items on that list of questions above could apply to the fox, I suppose).  They are closer in body size to the coyote than the coyote is to the wolf (the fox is the smallest of the three), and they occasionally exhibit similar behavior (largely solitary and they’re proficient mousers).  However, the fox’s brighter orange fur and typically poofy tail with a white tip makes IDs a bit easier most of the time.  Sometimes you’ll find foxes that are on the blond side or even black, but generally there isn’t as much difficulty confusing a fox with the other two major canid species.

You can read an earlier piece I wrote about coyotes here.

View more wolf images in the photo archive. (Note: many of my older wolf images have not yet been uploaded.)

View fox images in the photo archive.  (Note: many of my older fox images have not yet been uploaded.)

Learn how to identify the presence of coyotes through their poop! This article can help with coyote and other animal scat IDs.

Otter vs. Beaver vs. Muskrat

Save the Children: Barred Owls Live Among Us
Best of 2016: Favorite Photos and Moments of the Year