Honoring Valentines in the Animal Kingdom

Happy Valentine’s Day, everyone.  Some of you may be celebrating with a special someone.  And for those still looking for love, that makes you like much of the rest of the animal kingdom.  Today many of us practice wooing with rituals full of flowers, chocolate and a myriad of other enticements.  The type of stuff that’s really not all that different from our wild cousins.  Our fellow mammals, birds and even reptiles and bugs use color, dance, sound, smell and other tricks to both find love and to ultimately “get lucky” on date night.  Here are a few examples.

For many of the male members of a species, attracting females is what life is all about.  In fact, many animals have evolved to carry around long feathers, sport bright colors or support other adaptations strictly for the purpose of attracting a mate.

Visual stimulation is a tried and true method of attracting a female.  This is especially true among birds.  Some species actually accessorize.  The Satin bowerbird of Australia collects blue objects to attract females.  But many males carry all the accessories they need with them.

The male Indian peafowl (a.k.a, the peacock) is one of the most famous showoffs.  He fans his long and colorful tail feathers in a hypnotic display when females are around.

Another bird species that I’ve mentioned before here in the blog is the Marvelous spatuletail hummingbird.  He flicks his long tail rackets independently to get a female’s attention, and then raises them in a lyre shape while dancing in midair to convince her to choose him. 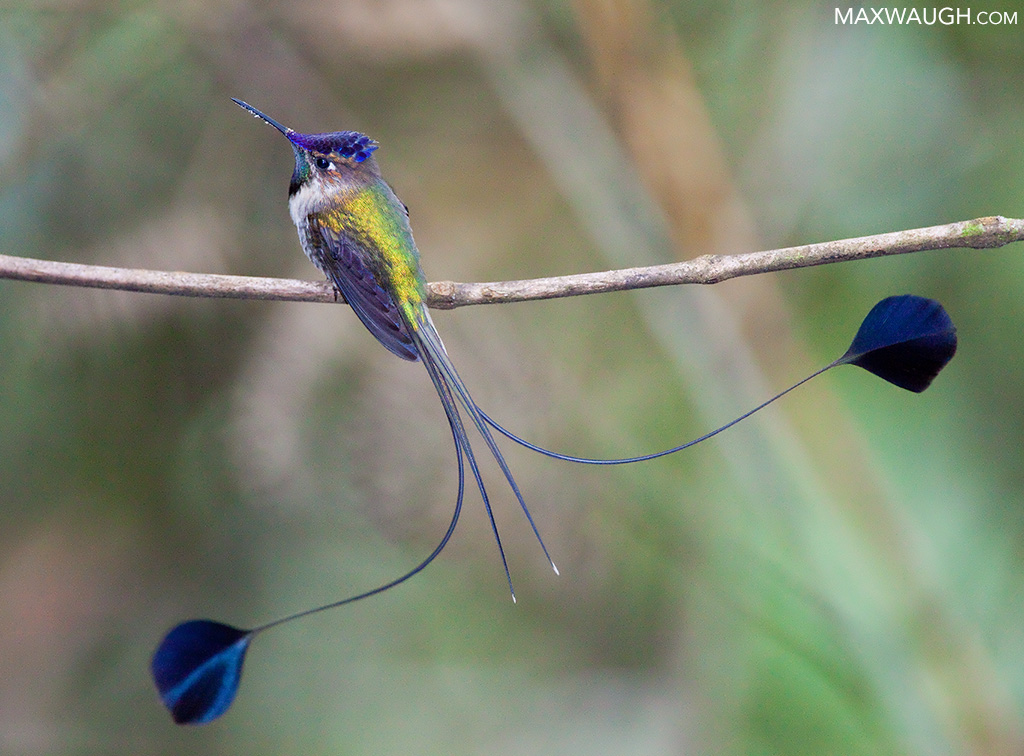 (See the spatuletail in action toward the end of my Peru trip video.)

Other birds also use eye-catching displays.  In Yellowstone, one sometimes sees the Blue (or Dusky) grouse fanning its tail feathers, fluffing his colorful eyebrows and exposing his breasts. 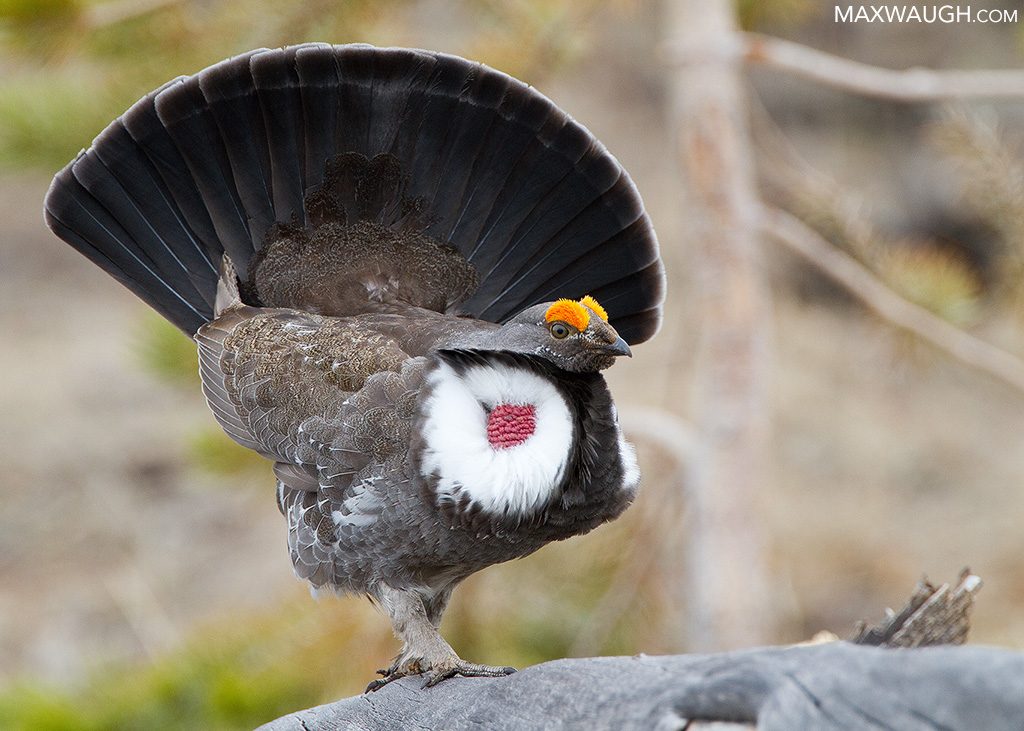 Some reptiles are showoffs too.  The male anole extends his bright orange dewlap in hopes of attracting a mate. 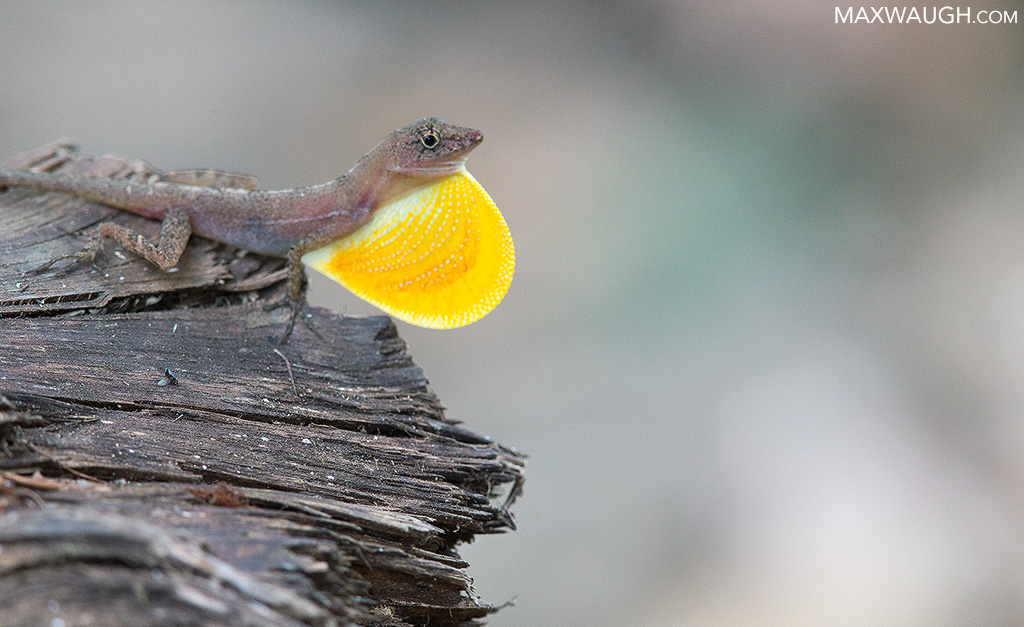 But occasionally, just looking pretty doesn’t cut it.  The ladies want to see your moves, guys.  There are some notorious dancers out there.  The male Blue-footed booby of the Galapagos Islands spreads his wings and does a slow alternating step when a prospective mate is in sight. 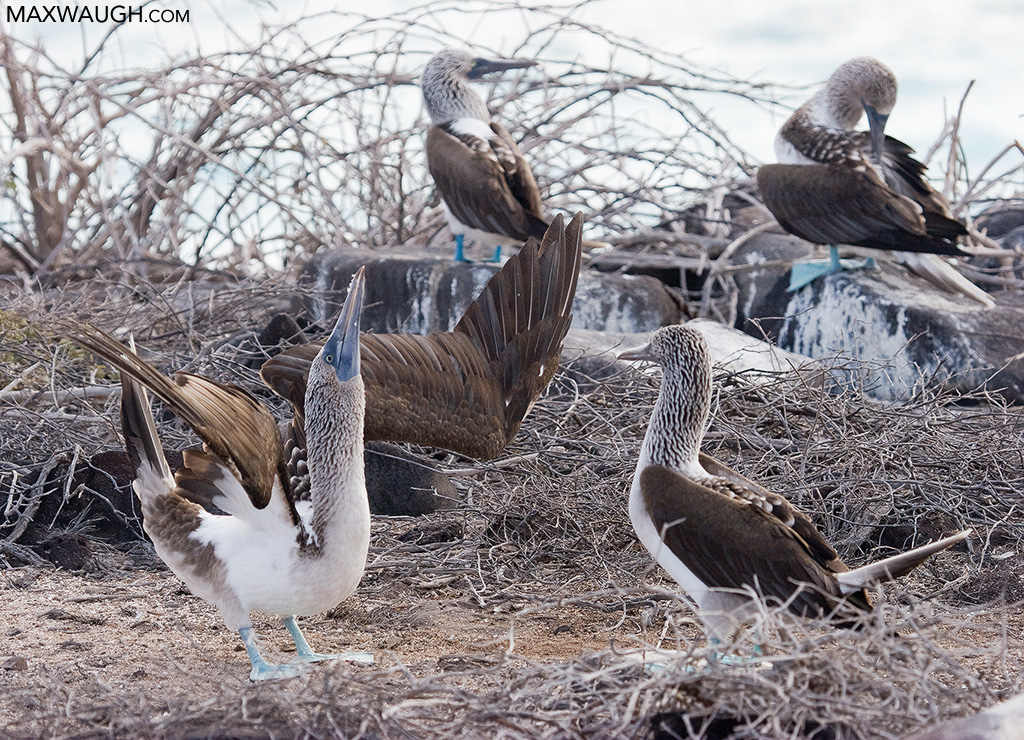 Other males are a bit more frantic.  The Blue-black grassquit (below, left) has earned the nickname “Johnny Jump-Up,” due to his energetic hopping up and down during courtship.  Manakins are small tropical birds that have some bright and colorful plumage.  But it’s often their dance that helps seal the deal with a female.  Each manakin seems to have its own ritual.  The red-capped manakin (center) is famous for its moonwalk.  My favorite manakin, the Orange-collared (right), bounces from branch to branch at a dizzying pace while clicking his feathers. 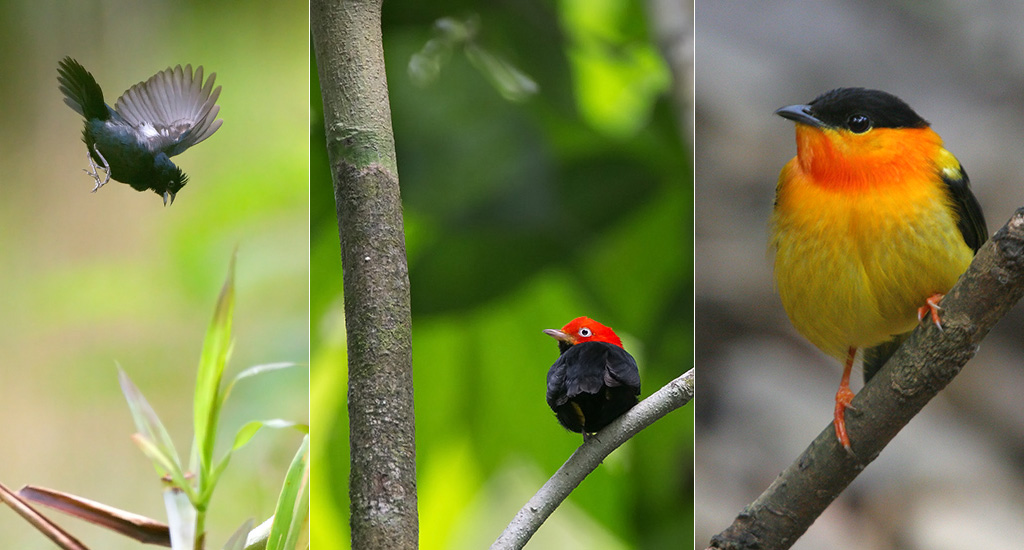 And yes, noise is important too.  The manakins click, frogs croak… even those Blue grouse, with their wide tails, will emit a loud thumping noise while drumming with their chests.  Another grouse species, the Ruffed grouse, uses its wings to create its own drumming noise.  It can flap its wings so quickly that its drumming sound is literally created out of thin air.  It’s a deep bass that increases in pace, sounding a lot like a Harley Davidson. 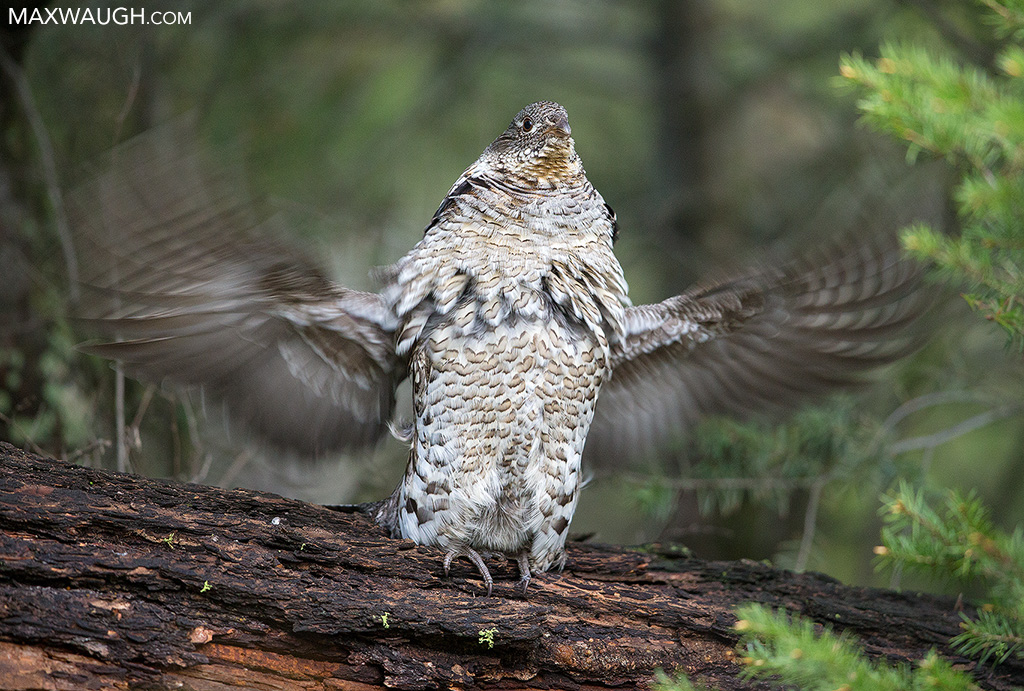 And, of course, once a female comes to check out this noise-maker, he then hits them with a visual display that’s difficult to turn down. 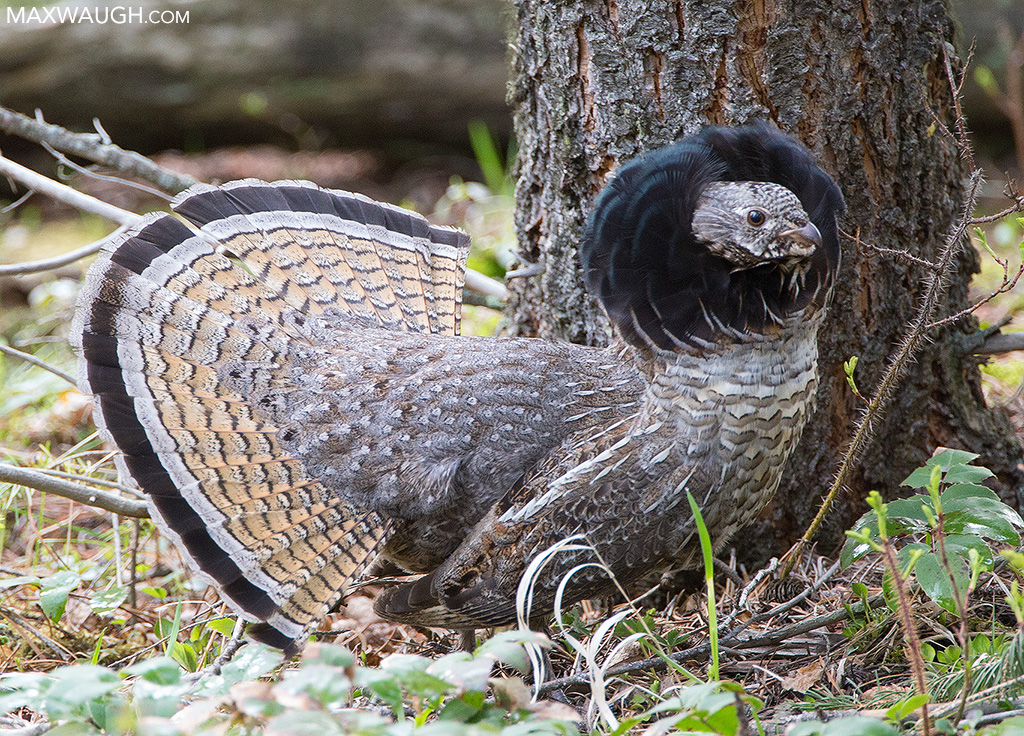 Other animals use noise as part of the mating ritual, though it’s not so much to woo females as to keep rivals at bay.  The Yellow-headed blackbird announces his territory with a shrill cry. 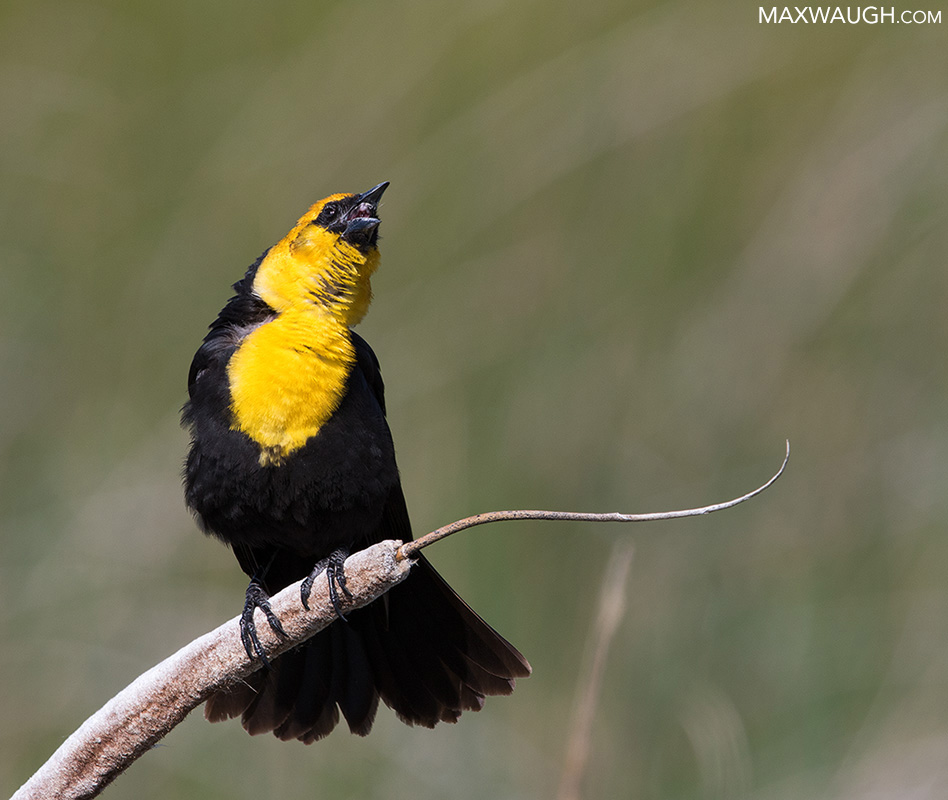 Mammals aren’t immune to vocalizing during mating season.  Bison bulls groan rather loudly before rolling in the dust (and their own urine).  Bull elk are famous for their eerie bugling calls, which they emit as they tend to their harems. 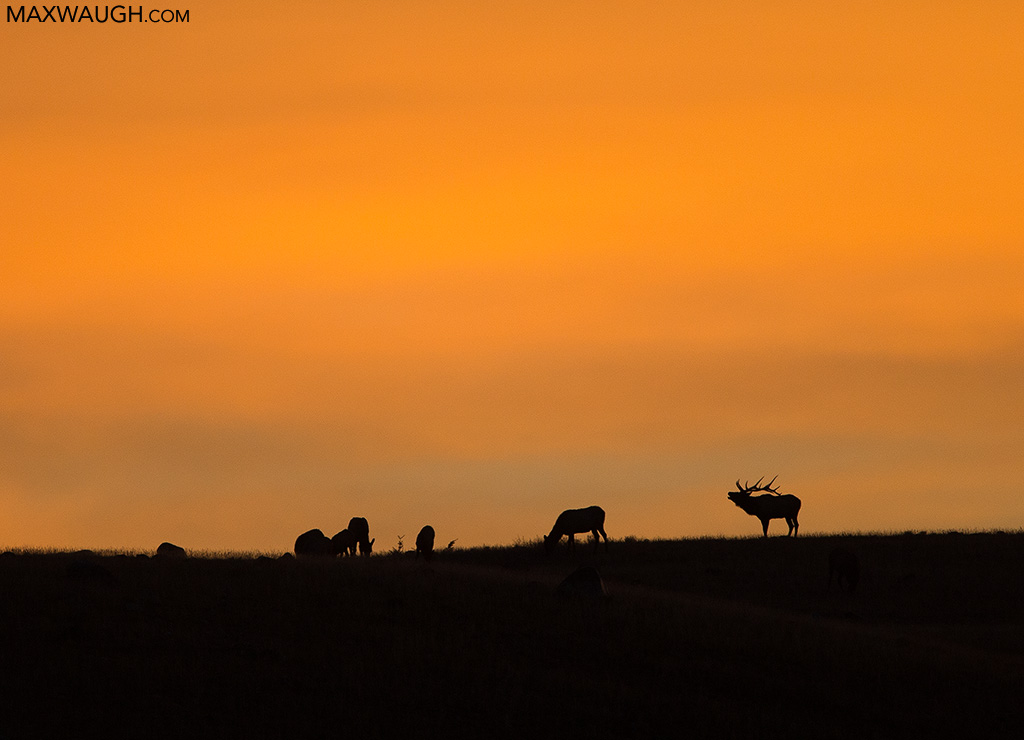 Sight and sound are important parts of the courting process.  But what about smell?  That too plays a role, especially among mammals.  Territorial marking is a common practice among wild cats and canids.  This cheetah sprayed a tree with urine as he and his brothers patrolled their territory in Botswana. 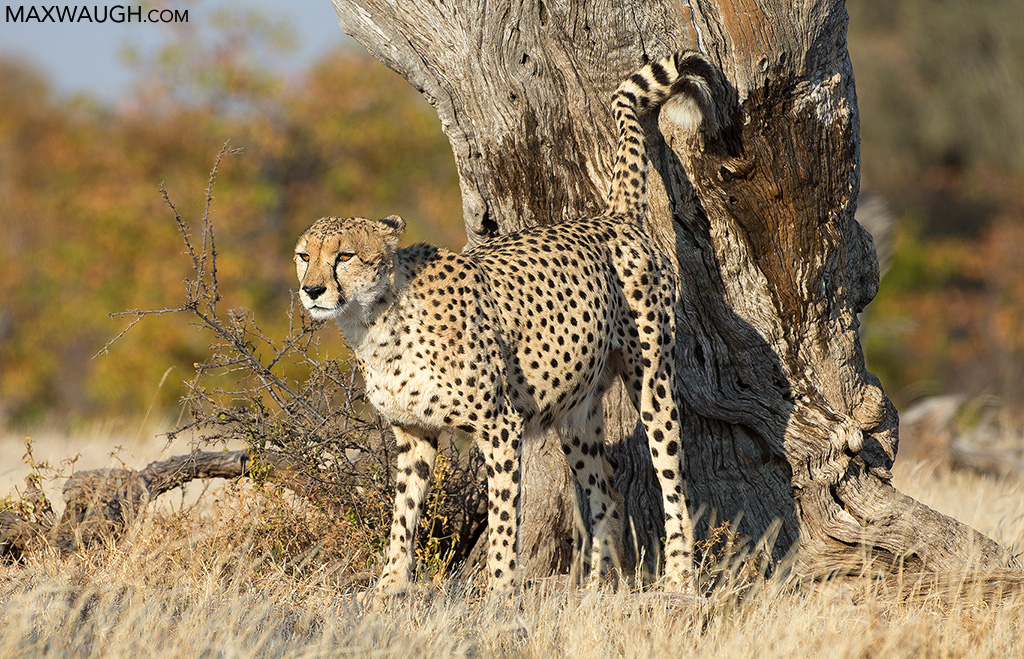 Cats don’t just spray.  They also have scent glands elsewhere on their body.  This leopard is rubbing its face over a bush to leave its mark. 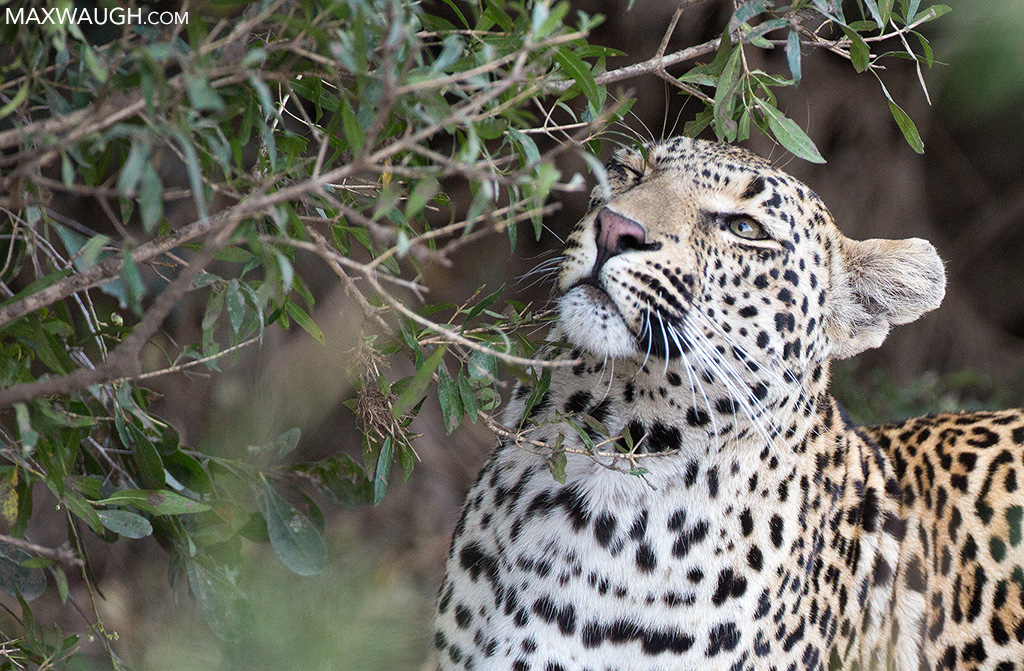 Scent marking is a way to let members of the opposite sex know you’re around, but it’s also a declaration of territory and a warning to rival males.  Even rhinos get in on this ritual.  Rhino middens—large piles of poo—are common sights in the African bush.  If a male rhino happens upon droppings from another male, he’ll defecate in the exact same spot and then spread his poo around so that his scent is the dominant one. 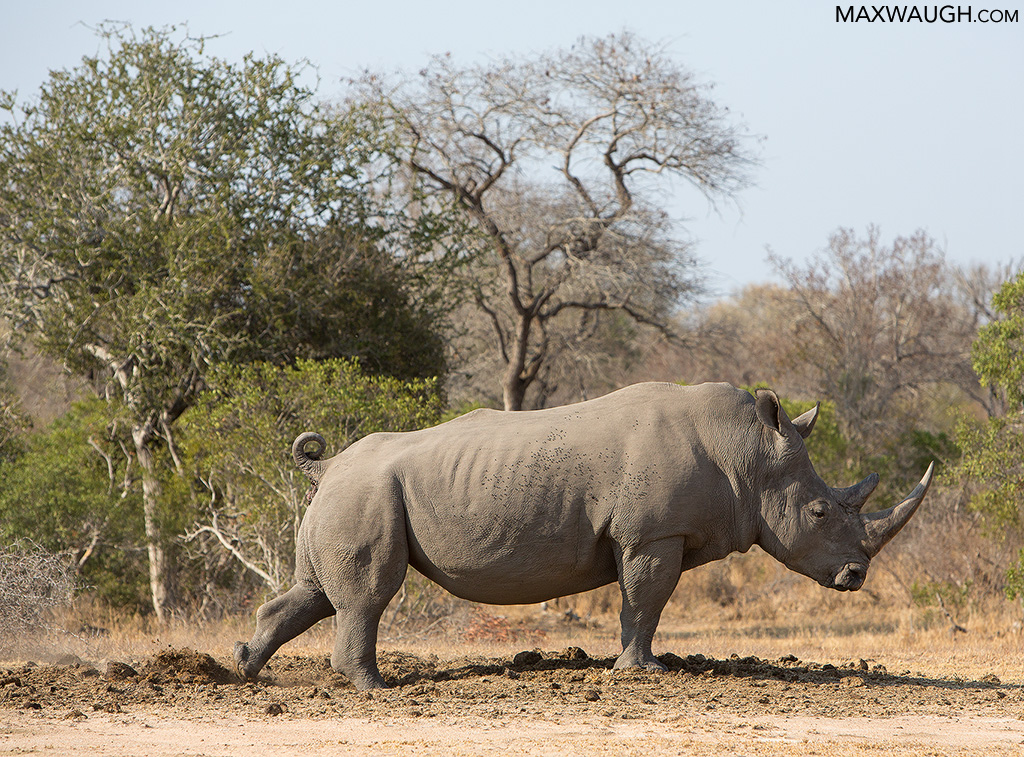 Scent can also be used as an indicator that it’s time to mate.  Seeing males following females around while sniffing their rear ends is pretty typical during mating season. 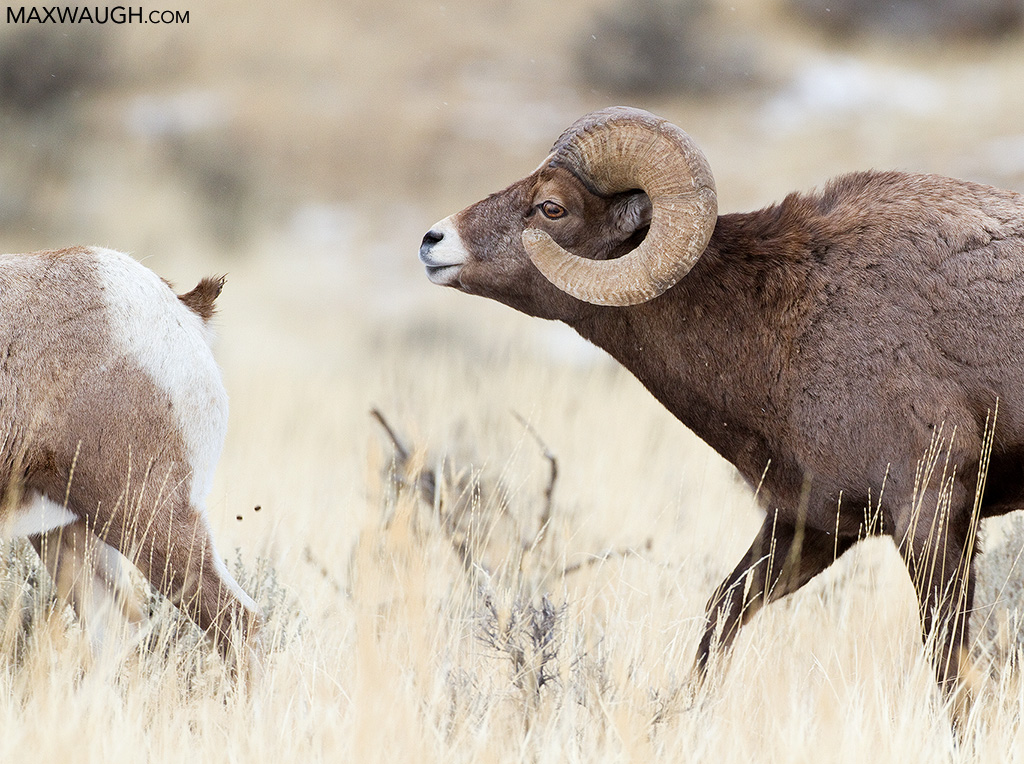 And how do they process these scents and determine if love really is in the air?  Well, it looks funny, but the Flehmen Response is a way for some animals to draw air into the Jacobson’s Organ, which helps process and interpret smells and pheromones. 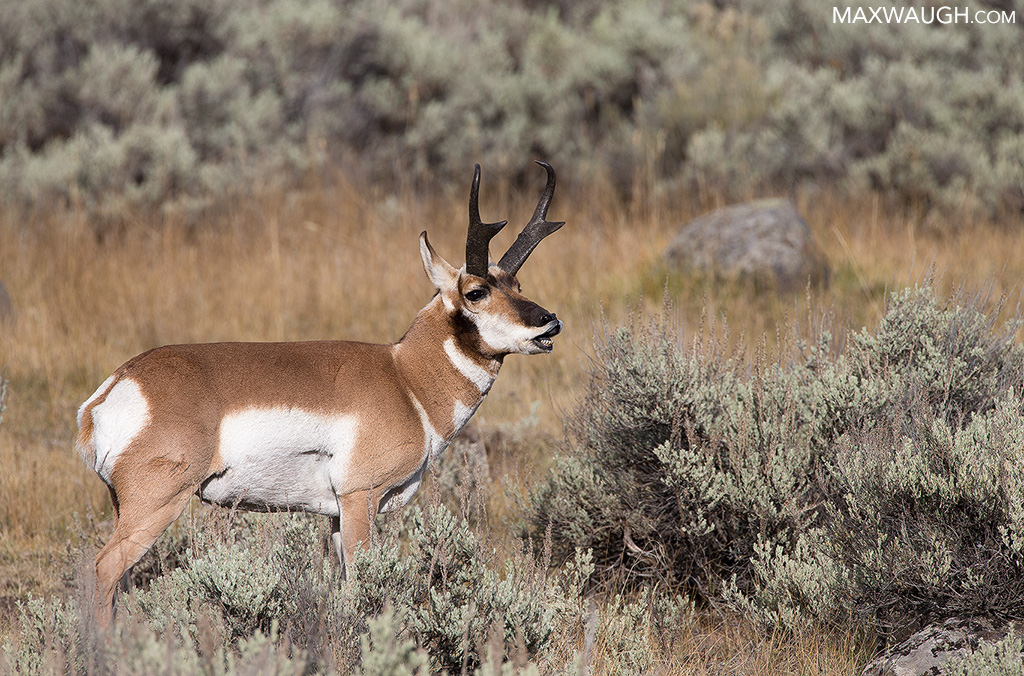 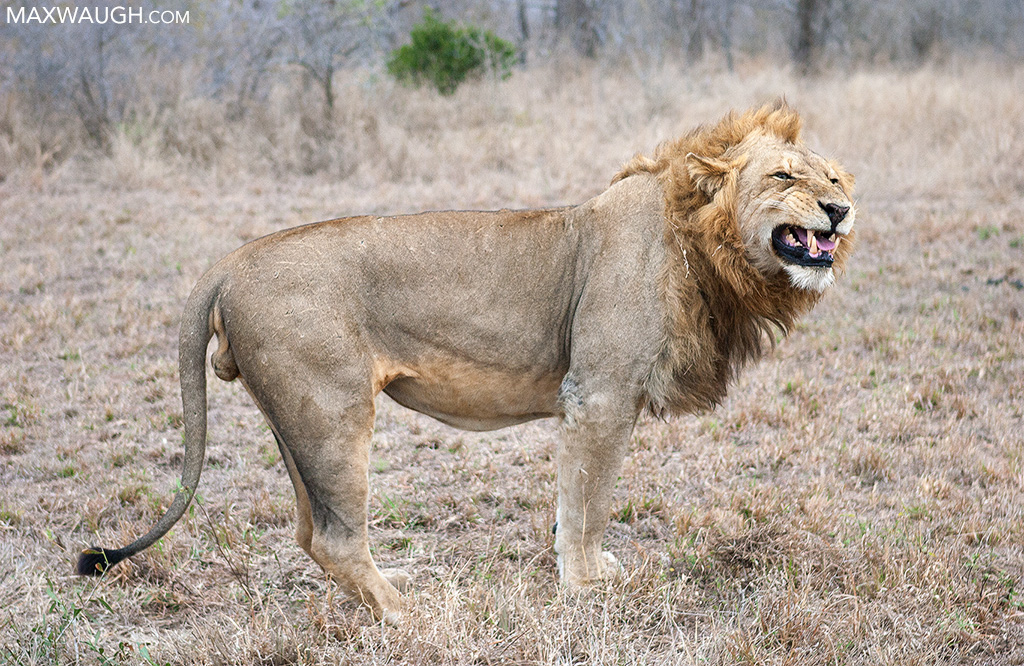 And if the smell is right and she’s ready to commit to a relationship?  Well, you know what happens next.  I won’t bother with those photos.

Just remember, even in the animal kingdom, cementing a long-term relationship sometimes means giving a rock to your beloved… 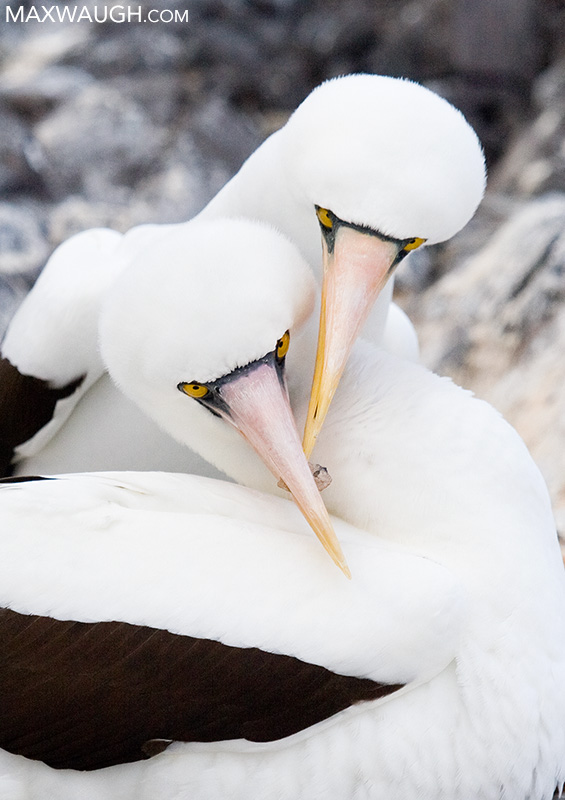