This trip is a bit different from my past trips to the park.  It has been quite a while since I’ve been in the park this early in the spring, but that’s not the big change.

This is our first trip to the park with our newborn son along.  He’s too young to remember this trip, of course, but it’s nice to get him used to road-tripping and spending time at our cabins from the get-go.

It will take us some time to adjust, there’s no question.  We took off a full day-and-a-half later than expected due to the lengthy prep and packing time involved.  Instead of making the lengthy 13-14 hour drive in one day, we split it up over two days.

And of course, my first day in the park was barely a half day.  But that was fine.  Having the opportunity to introduce our son to his new home away from home was fun (even if he slept through most of it), and made up for the quiet morning, wildlife-wise.

This early in April, I didn’t expect much action.  Spring is still struggling to gain a foothold.  Snow is receding, but the exposed ground is brown and ugly. 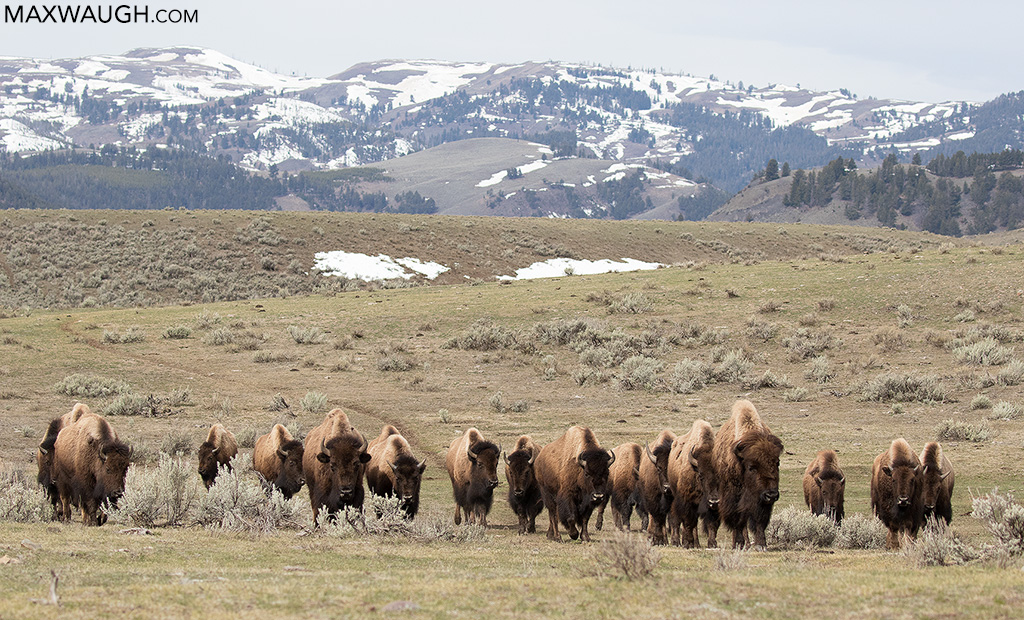 Death is still prevalent, with at least two carcasses between the Lamar Valley and Round Prairie (with lots of coyotes taking advantage).  Another bison was in his final throes in Soda Butte Valley.  Ravens were already picking at it, despite the fact that it would kick its legs every few minutes while laying prone.

There are some signs that spring is around the corner.  A bluebird flitting across the road, a lone marmot perched on a rock, and even a Uinta ground squirrel standing lookout while soaking in the sunlight.  But there’s still a ways to go.

I hoped to sneak into the park to check on the bison that had presumably passed yesterday, but once again I was delayed due to baby shenanigans.  I did eventually make it in for a morning excursion.

A couple miles inside the northeast entrance, a red-tailed hawk was being harassed by a Clark’s nutcracker, which eventually forced the raptor to take flight. 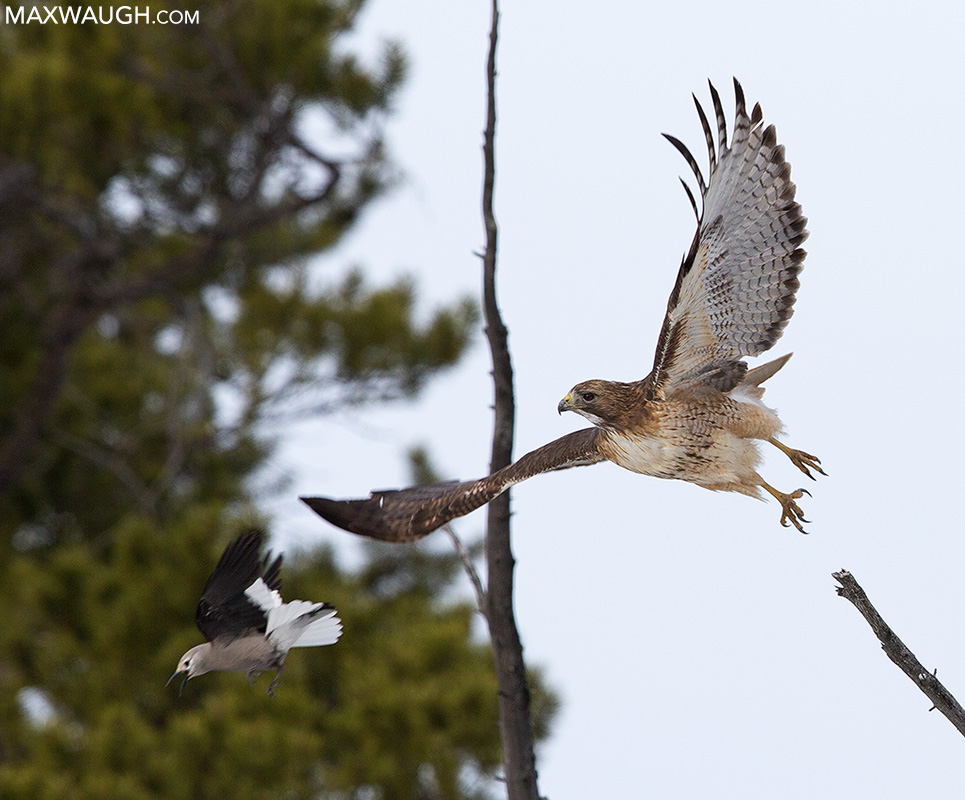 The recently-deceased bison from yesterday had been moved slightly, and it sounds like a grizzly had visited during pre-dawn hours.  Later I just missed a few other interesting sightings, including a Great gray owl and a badger.

The main animal putting on a display (aside from the ubiquitous bison and elk) was moose.  At Soda Butte Creek Picnic Area, a cow with twin yearling calves hugged the far treeline.  I’m guessing this is the same family I saw last spring with my tour group, so it’s nice to see they survived the year.

Those weren’t the only moose!  Just past the fresh carcass east of Soda Butte, another cow with a grown calf was grazing down in the flats not far from the road.  Sort of an odd place to see moose, and they seemed somewhat uncomfortable being so far out in the open.  They soon headed uphill for the relative safety of the forest.

Later, I managed to see my first bears of the year.  I saw a few cars pulled over in Little America, glanced up the hillside and spotted two grizzly dots in the distance.  I figured that’s why everyone had pulled over, but in fact they weren’t even aware of the bears.  They had stopped for the aforementioned badger, which had been perched on a rock a short time before.  The grizzlies were a sow with yearling cub.  Apparently she had started with three last year but lost two of them fairly early.  The third survived the winter.

The final notable sighting of the morning was an attack grouse!  It’s been a while since I’ve seen a grouse go after vehicles, and this one was hiding out just off the road near the Confluence (an odd place for a grouse… perhaps this is what made his ambush so effective).

I had to slam on the brakes as he dashed out in front of the car.  Then he disappeared.  Worried that I’d run him over, I stopped and got out to make sure the bird was out of the way.  I’ve been in this situation before… the last time, the grouse circled around the back side of the car and pecked at my legs.  So naturally I looked behind me first.

The grouse shuffled back around the front of my car and glared at me as I glanced out my window. 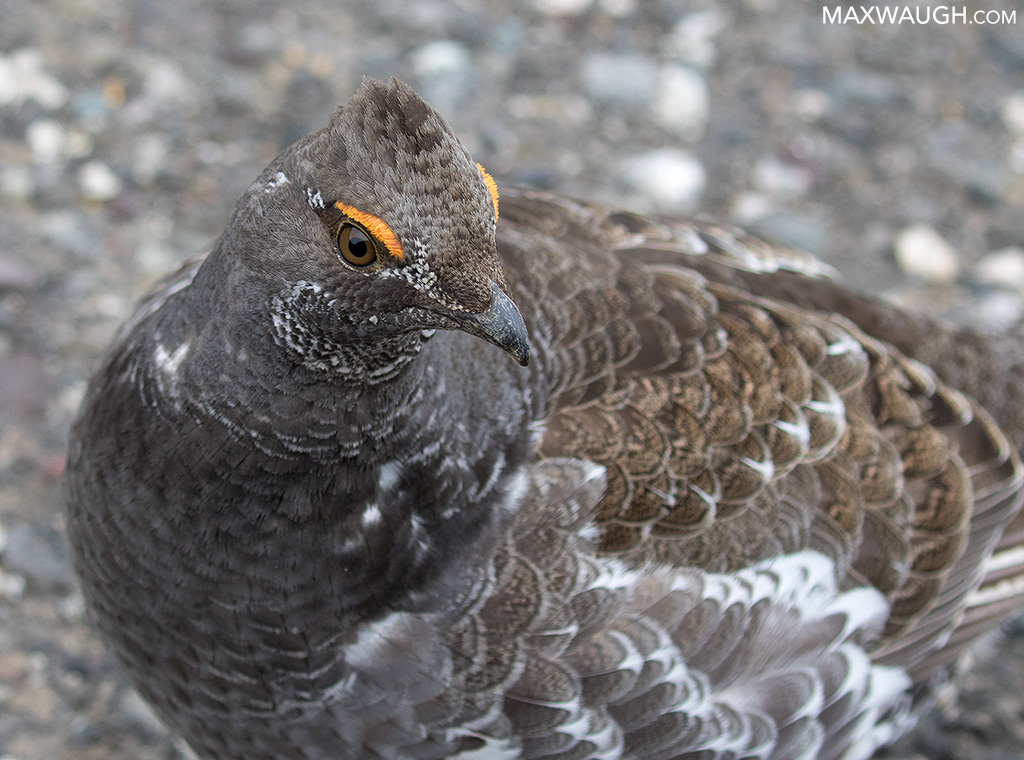 Comfortable that it was safely out of the way, I slowly pulled forward and got going.  In my rear view mirror, I could see the grouse giving chase.  Not quite as intimidating as the T-Rex in Jurassic Park, but I have no doubt he was closer than he appeared.

I drove further down until I could find a safe place to pull over.  From there, I watched as the grouse proceeded to ambush and confront more vehicles. 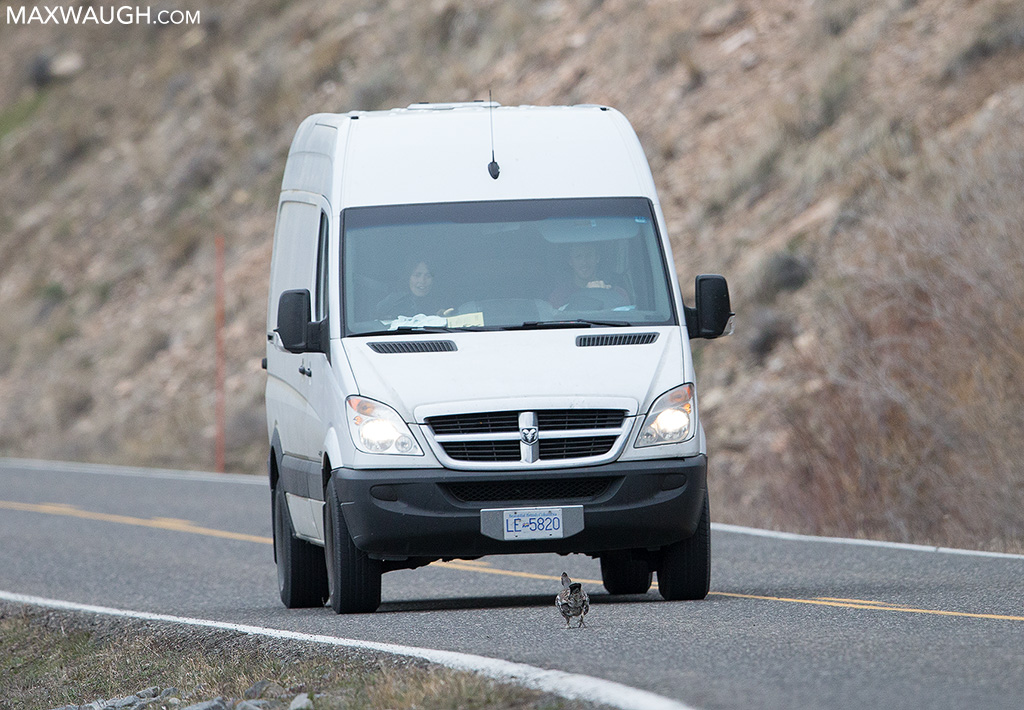 Another quasi-half day.  Perhaps later during the trip I’ll be able to escape for longer outings, but for now, diapers and Daddy duty call.