We stayed in Monday morning, but managed to get ready to hit the road following lunch.  Errands were on the agenda today, fortunately including a stop at Mammoth, which gave me my latest excuse to get some park exploration time in.  The family joined me for the afternoon, though they both slept through much of the drive.  Like mother, like son.

It was fairly quiet, once again.  Escaping the snow in Silver Gate, things cleared up for a short time as we drove through the Lamar Valley.  The Lamar Canyon wolves were bedded down north of the road, within view but too far for photos.  The rest of the trip west was pretty uneventful.  More marmots are showing themselves, and large flocks of bluebirds are battling the winds in Little America.

At Blacktail Ponds, I stopped to chat with sculptor George Bumann, who was doing a Sandhill crane study.  On our way back through, we ran into some of my former tour clients, who updated us on some of the sightings we’d missed (including the Canyon alpha female near Mammoth).

We continued east, in some nasty, blustery blizzard-like weather on the Blacktail, and then later again in Little America.  It’s at this point that I heard that the grizzly sow with cub were back out again, this time on the lower slopes of Junction Butte.  They were easily visible from the Wrecker Pullout, a bit closer than when I saw them two days prior.  But it was still about 200 yards.  I waited long enough to witness the family nursing before packing up.  In the parking lot, I snapped a couple photos of a fat raven before hitting the road again. 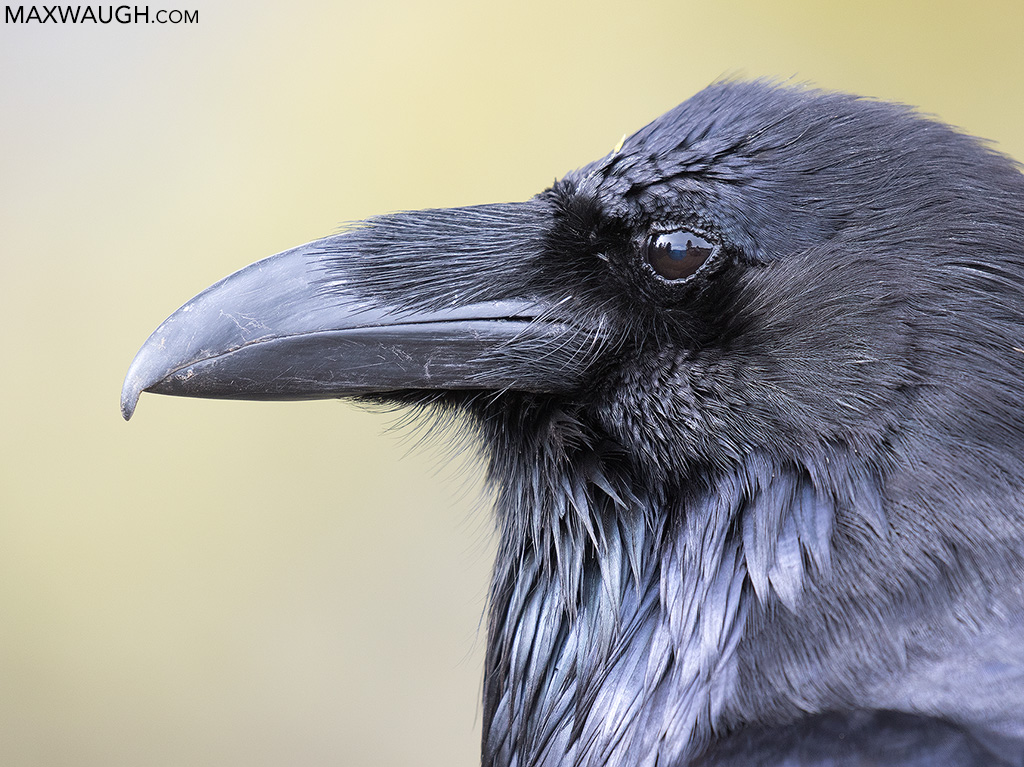 On the way back through the valley, the wolves had departed.  Driving up through the northeast, hundreds of juncos lined the road, foraging where the snow had recently melted.  So we had a vanguard of tiny birds flying before us much of the way home.

And they must have followed us, as a large flock was pecking away at the exposed ground just outside our cabin window.  A while later, a fox appeared out of the woods to investigate the flock.  Most of our foxes have traditionally been pretty used to people, but this one actually bolted the moment I opened the front door around the corner.  Nice to see that not all the local foxes are habituated… it increases their chances of survival come the busy summer season when so many are killed by vehicles out on the highway.

No park for me on Tuesday.  It was a relaxing day at the cabin, though we did manage to make it out for a walk, from Silver Gate down to the NE gate and back.  It was an absolutely gorgeous day.  A lot of the recent snow melted off quickly (still plenty left, of course!), with sunshine and views of the surrounding mountain peaks.

I did have a false alarm when I walked down our driveway and found large canid tracks (to go with the usual smaller fox tracks).  I thought maybe we had a wolf (they have come in and out of town recently), but after following them for a short while I figured it was more likely that one of the town dogs that runs loose was leading me astray.

Later in the day, one of said dogs joined up with us as we took the mile-long walk down toward the NE entrance. 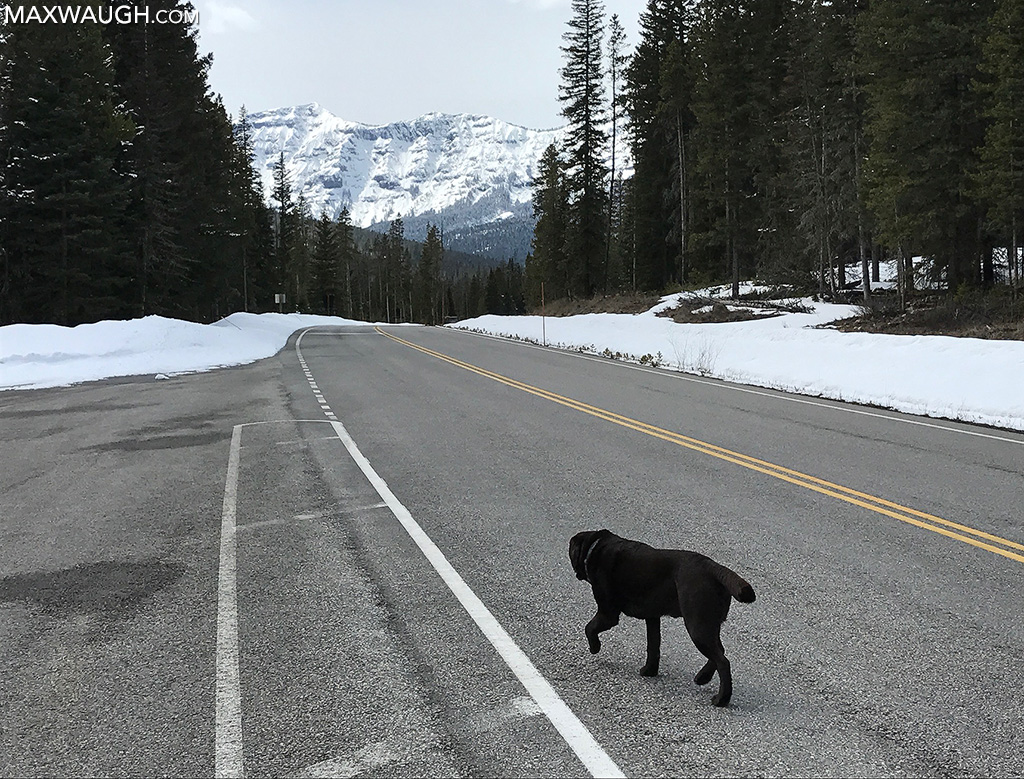 For once, I got more than three or four hours in the park… I got five-and-a-half!  I left at 7am, by far the earliest I’ve been able to hit the road on this trip, while Jenn and our son stayed in.  I hoped that maybe the “early” start would yield more in the way of sightings.  Not necessarily…

There were three moose way out in Round Prairie on the drive through.  The Lamar was quiet, though I stopped briefly to photograph some magpies (a common bird, but one that likes to fly away the moment you get close, so I actually don’t have many photos of them).  I also pulled over to snap a few wider shots of a herd of pronghorn with the sunlit hillsides of the southern valley in the background. 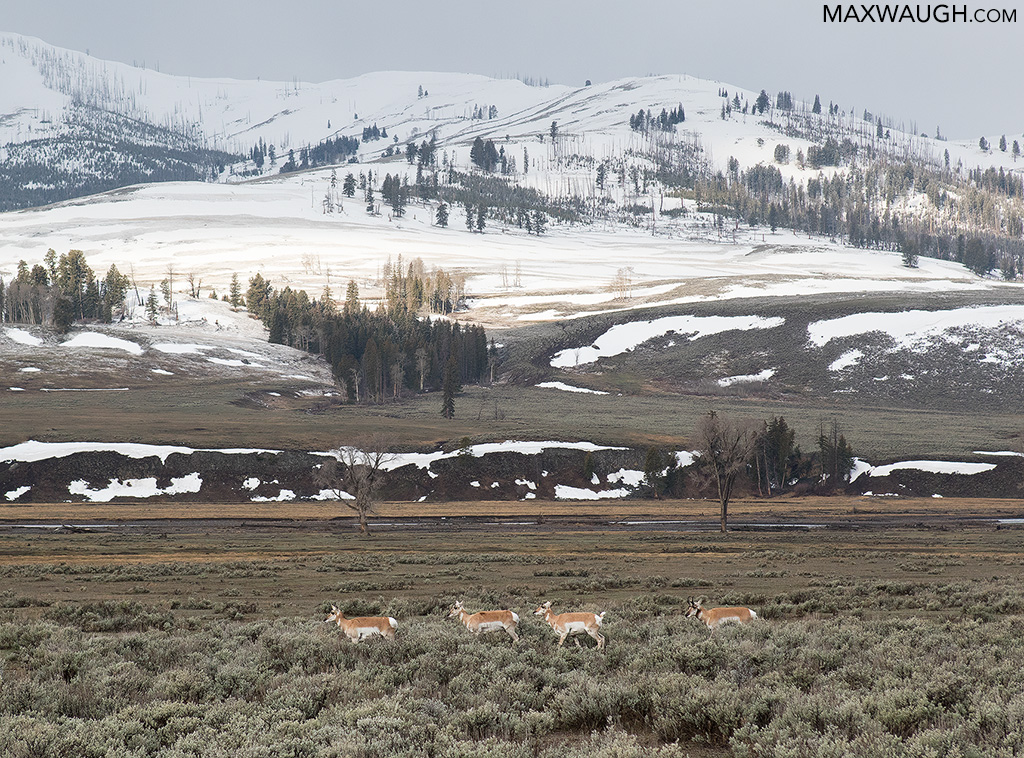 Nearing Slough Creek, a lot of folks were pulled over scoping the hillsides above the road.  I believe this may have been where the grizzly sow with yearling ended up, as they were all the way near the bridge yesterday.  I kept going.

A Red-tailed hawk perched on a boulder fairly close to the road in Little America, but took a page from the magpie playbook and flew off when I pulled over.  I’m keeping my eye out for increased bear and badger activity in this area, but there’s nothing to report just yet.

Just beyond Roosevelt, two white-tailed does (an uncommon sight) trotted into the forest, and further up around the bend a lone mule deer doe grazed against a nice hilly backdrop, so once again I stopped to snap a few wider animalscapes.

I headed east until I hit the area where a Great gray owl had been seen in the last week, with the idea of hiking up into the woods to see if I could have any luck finding it.  The slopes were steep and still coated in snow in places, so things were a bit slippery and treacherous.  But hey, I only fell twice.  There were plenty of signs of life, including fresh elk droppings, ravens flying with nesting materials, and plenty of bird calls (especially flickers).  But no alarm calls, which would be a great indicator that an owl was nearby.  So I struck out.  But it’s good to get in more walks in anticipation of my Patagonia trip that’s coming up in a few weeks.  We’ll be clambering over very similar terrain looking for mountain lions down there, so it’s nice practice carrying the gear around again (yes, I even consider the falls to be “practice”… one has to keep the gear safe!).

I didn’t spend a lot of time back in the woods because I had agreed to meet friends to hike the Tower Road, so we headed over there, geared up and were soon walking up the closed road.

Not too much happening up there.  A couple bison were grazing beneath the Calcite Springs lot.  There were fox droppings on the road, we saw a distant Great horned owl, and came across a couple of sandhill cranes as we explored the hillsides above the road.  No bears yet, even though black bears are starting to show up in places now.

After we finished the hike, there was a bear jam down near the Yellowstone River bridge, purportedly caused by a black bear, but based on the angle everyone was aiming their scopes and cameras at, I figured it was a bit too far for me.  Hopefully I’ll see it another day.  On the way back through Little America, two pairs of Sandhill cranes were creating a racket that disturbed some napping bison. 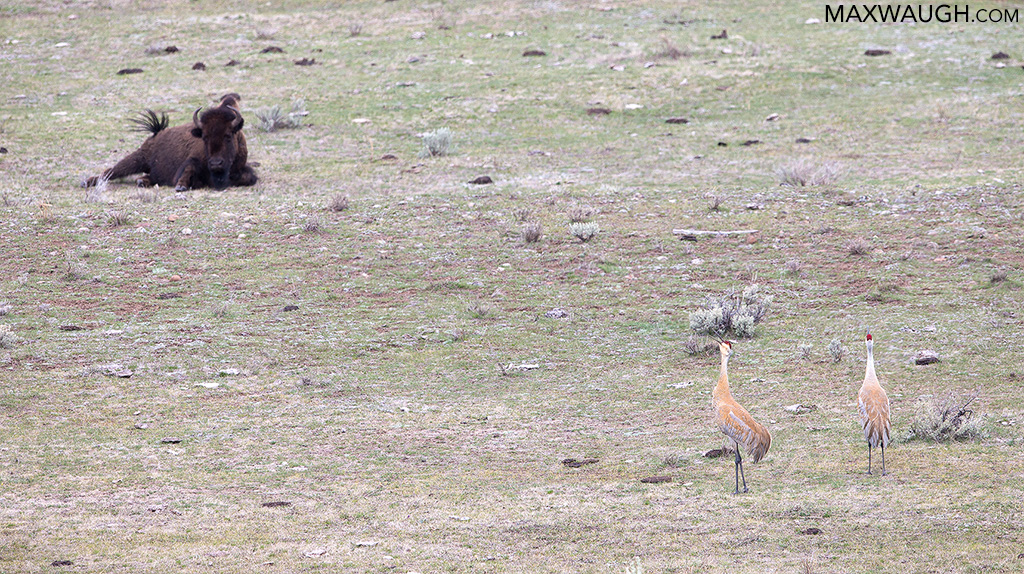 It was time by then to return home and to relieve Jenn from parenting duty… which would have happened if I hadn’t fallen asleep almost immediately after walking in the door.  Oops.  Sorry, Dear.