Another day off from the park, and once again it was a beautiful one.  I seem to miss spending all the pretty days inside Yellowstone, but at least we’re taking advantage of it with some walks along the largely-abandoned highway leading in and out of Silver Gate.  There are worse ways to enjoy the outdoors.  Loads of Clark’s nutcrackers were flying from tree to tree in town, including at our cabin, but we didn’t see much else on Thursday.

I was going to head back through the park Friday, since there were once again errands to run at Mammoth and Gardiner.  The family decided to join me (okay, the infant didn’t have much of a choice), and we were able to hit the road at 8am.  Which is early these days.

At Lower Barronette, a coyote sprinted across the road and paused in a receding snowbank before heading up toward the trees.  The snow in the park is melting at a rapid pace thanks to the last couple days of warmer weather.  It’s dirty and pockmarked in most places.

Nothing happening in the Lamar beyond some hopeful wolf watchers and a couple more coyotes heading toward the valley floor to hunt.  Grizzly spotters were out and about near Slough Creek, scanning the high slopes.  At the western end of Little America, I was able to photograph a male bluebird before it flew off to chase its mate. 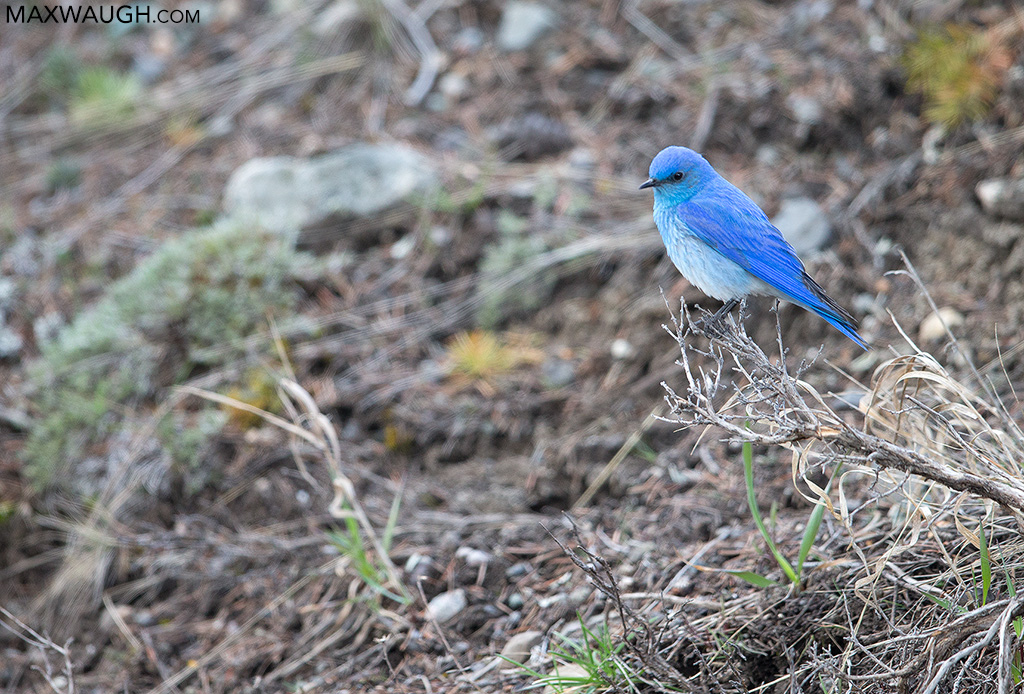 By now, I had received the news about the passing of the Canyon alpha female.  She was my favorite wolf, and though I held out hope of seeing her one more time, I figured chances were slim given her advanced age.  Still, I felt fortunate to have had a few encounters with her over the years, and hope to write a bit about those meetings and share more photos in a future blog post.

We ran our errands at Mammoth and Gardiner, and had to make a pit stop at Mammoth (which apparently has the only diaper changing table within 30 miles) on the way back through.  As we drove out of the village heading eastward and down the hill, a wolf crossed the road in front of us!

It was a healthy looking black wolf, uncollared.  I was fortunate that there was a safe place to pull the car over right where it crossed.  The wolf paused as I grabbed my camera and looked back, but I wasn’t able to fire off the first shots before it started trotting away again (too bad, that would have been nearly full frame).  I had to settle for a few photos as it paused again further away.  I hoped they would turn out okay, but the heat of midday was already causing some distortion, so they weren’t tack sharp and the light was pretty harsh. 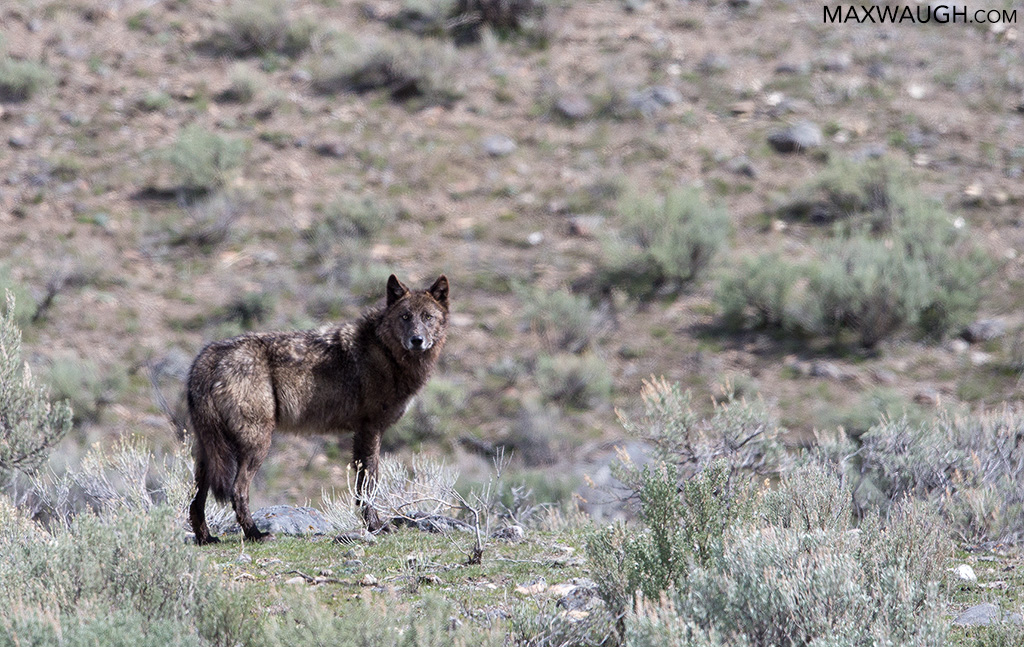 Still… a close wolf sighting!  A hard thing to come by these days, and it was my closest run-in with a Yellowstone wolf in two years.  A few minutes later we came across Unit 1, and I stopped to give him the update.  He speculated that it could be a member of the Canyon Pack, mentioning that another gray wolf was seen near Mammoth earlier in the day.  Given the news of the day, a Canyon Pack wolf sighting seemed appropriate.

We made it the rest of the way without any more sightings of note.  The afternoon was spent taking care of business and prepping our cabins in Silver Gate for the upcoming busy rental season.

I was ready to hit the road promptly at 7 this morning when the power went out.  Power outages are common in Silver Gate, so it’s not a huge deal, but I had to wait around since it meant the family might come with me into the park instead of hanging out in a truly rustic cabin for the morning.  Fortunately, the power was back on within a half hour, so I hit the road without too much delay.

When I neared the Lamar, I passed a number of vehicles heading northeast.  Once you leave Round Prairie, sight lines become limited, but they must have had some radio collar signals from the wolves that were leading a caravan to canvass the area.  In the Soda Butte Valley, several cars were scattered, including four parked in the No Stopping/Standing/Walking/Breathing Zone close to the now nearly-barren bison carcass.  I didn’t realize those zones had an expiration date on the signs.  Something to keep in mind for next time.

I didn’t see any wildlife though, so I kept driving through.  Halfway through the Lamar, I spotted one of the spring mainstays of the valley: a lone Red-winged blackbird male who likes to stake out a small pond on the north side of the road each year.  There’s not a ton of wetland in the Lamar, but this is one spot that feels like home to this blackbird every spring. 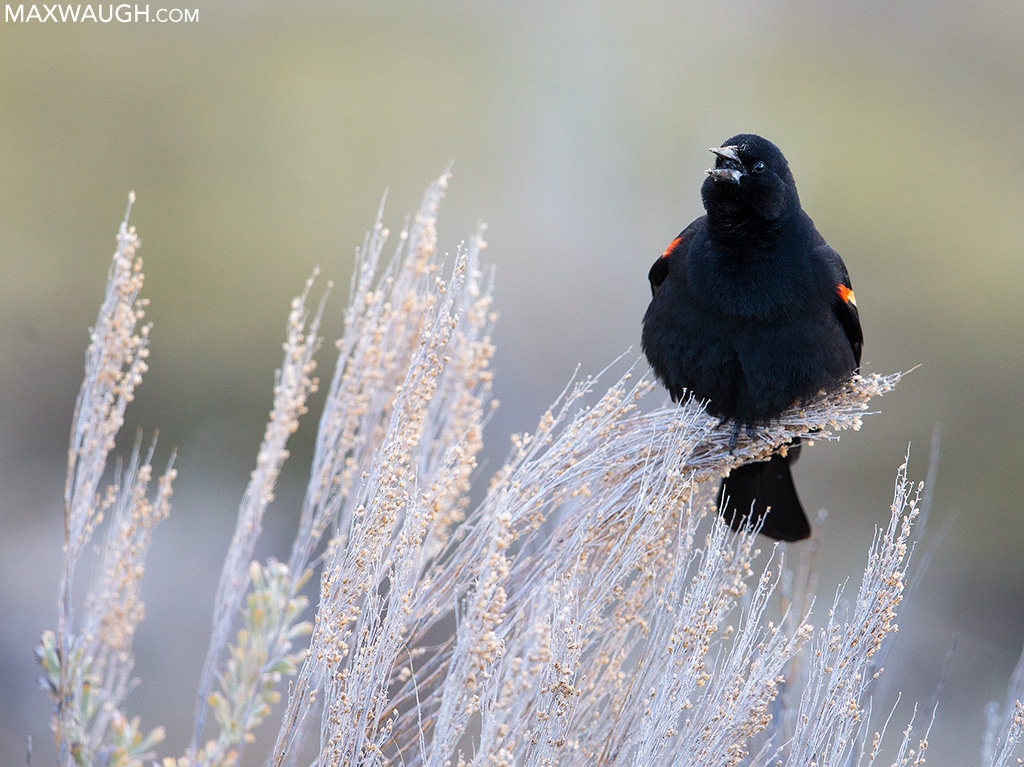 Continuing on, I hoped there might be signs of bears or badgers, but it was all about bison and pronghorn, as usual.  At the grove of aspens at the east end of Little America, starlings were everywhere, including popping into the nest hole American kestrels have used on and off in recent years.

I continued further west, spying three white-tailed deer beneath the road at Elk Creek.  Around the bend I passed through a herd of bison.  I thought there was a good chance I’d see them on the way back if they continued their western trajectory (and that proved to be the case, as I weaved through a jam on the way home).  As I drove by Floating Island Lake, what initially looked like a large boulder appears, in fact, to be an elk carcass in the middle of the pond.  Some new “No Entry” signs have been posted, and it’ll be interesting whether any bears make an attempt to swim out to the carcass when they get wind of it.

I did have a goal on this particular morning.  Since things were fairly quiet again, I opted to explore the Hellroaring area on foot.  This spot has been notable for a bevy of wildlife sightings, from mountain lions to black bears, grouse and sapsuckers, pika and the weasels and martens that hunt for them.  Several species of owls too, including the harder-to-find Northern pygmy and Long-eared.  So it was worth looking around, even if it was a bit early in the season.  It was nice and sunny outside too…

…and cold.  Wow.  Though it appeared to be another one of the dazzling spring days in the fifties we’ve enjoyed this week, it was actually closer to freezing outside.  Bundled in my hat, gloves and thick fleece I was fine (especially once I got moving), but it was quite a jolt when I first stepped outside.

I set out, initially following some game trails before heading off into the woods.  The curious juncos, flickers and pine siskins may have heard cries of “Hey bear!” echoing through the trees.  Birds were around, but there were few smaller mammals.  I heard the occasional red squirrel alarm call, but there were no signs of pika yet.  A trio of mule deer cantered through the trees up ahead.

Finally, I stumbled across a couple of blue grouse.  Thankfully I spotted them early… they’ve nearly given me a heart attack in the past as they exploded out of the brush with their machine gun wingbeats.  The first one scurried away a short ways before taking to the air.  The second, just up the hill, didn’t mind my presence.  It may have been a male, sticking close to a potential lek site for the upcoming courtship season. 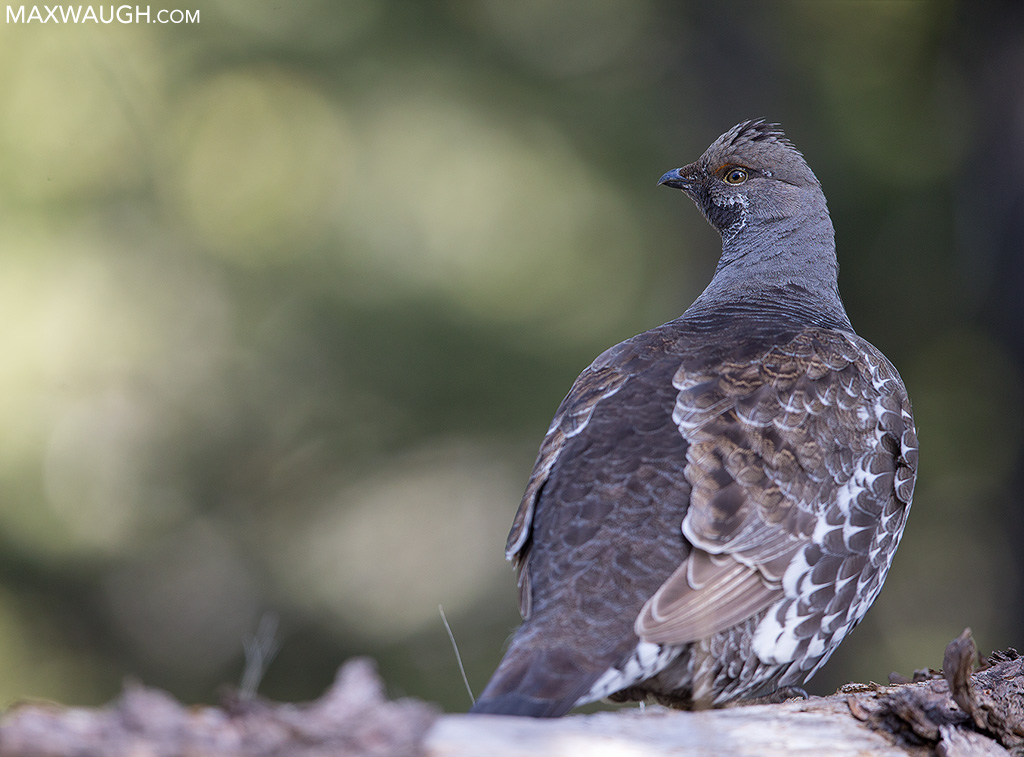 Many of the rocks in the area are rather colorful, with lichen adding a nice complement to the pinks, grays and oranges.  There was also widespread evidence of wildfire in the area, and the charred tree trunks made for interesting patterns.  One burned tree was whittled down to such a narrow base that I hesitated to approach it, lest I find a crispy beaver at its base.

Wandering northward, I came to some open areas that looked out over the Yellowstone River canyon.  There are some beautiful views there, of what looks to be ideal mountain lion territory.  A quick scan of the far slopes didn’t reveal any cats.  And before you think my imagination was getting the best of me, I later found a large solar panel, set up to power a trail cam… most likely for mountain lion research (no, I didn’t take a selfie for the scientists).

I circled all the way back to the car, with few photo ops but a nice peaceful hike under my belt.  It was time to turn back to the northeast, with the idea of returning to Silver Gate by lunch.  After a brief stop to chat with a friend (who reported a couple wolves in the eastern Lamar, and told me that she fell victim to the attack grouse yesterday), I headed home.  It was interesting to note that new, brighter yellow No Stopping signs were now standing in the Soda Butte Valley.  Presumably these won’t expire for another week at least.